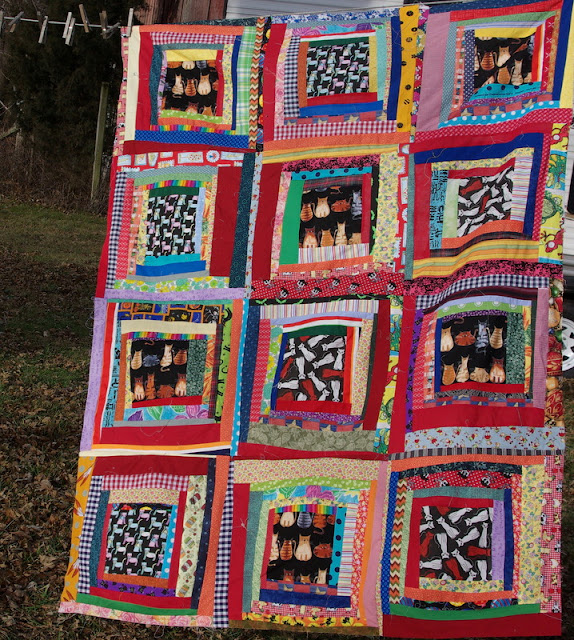 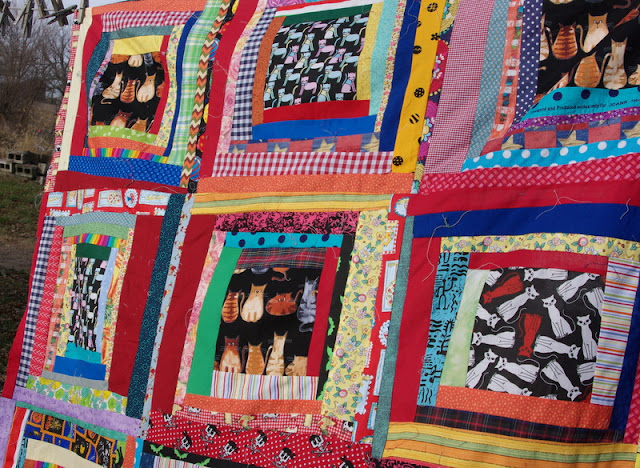 My foot got tangled up in some strings hanging out of the bright long string box so I decided it was time to put the lid on it.  That meant I had to use some strings.   I cut some dark cat fabrics into 6.5 inch squares for the centers.   Then I sewed  some strings around long cabin style and I had a combination of Happy Block and Wonky Log.  I think Happy Wonkies sounds better than Happy Logs so that's what these blocks are.  And together in this quilt they are Cattywampus!

I originally thought I was making 14 inch blocks but when I went to square them up I found them to be big enough for 15 inch blocks.  Then I figured out the block I was comparing them against for size while making them was not 14.5  inches like I thought but 15.5.   Sheesh!   And you know it took me longer to square up these  12 blocks than it did to make them?  Squaring up large blocks is not my favorite thing to do. 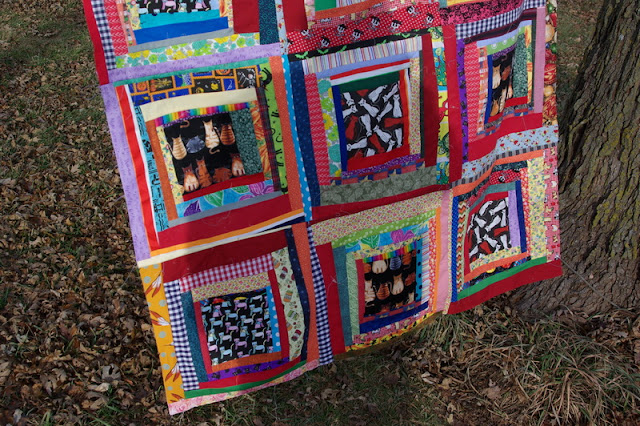 The lid is on the box now but that doesn't mean I won't trip over it.  And I see I probably have enough for another quilt this size in there.  Cat centers are cut and ready for Cattywampus II.

I need to figure out what to do for a backing then get it quilted.   Then it will be donated.

Fun over. I'm going to go clean inside the refrigerator since I couldn't convince my husband that it was his job.

Cute quilt with a cuter name! The mascot at GS3's high school is the Wampus Cat. I'm still not sure what they are.

Oh, that is a fabulous fun quilt:)
It put a big smile on my face.
Connie :}

Cute! I did invest in a 20” square ruler just for squaring up these large blocks. Otherwise, it is a challenge!

I think squaring is a concept. You try to achieve it but it is never really completely, perfectly accurately square. Your catty fabric on the other hand is purrfect making for a me-wow quilt!!!

I do like the names you choose for your quilts! Always make me smile and they are always so apt. Cattywampus is a great flimsy and I know No II will be equally bright and eye catching. Great combination of Happy Blocks and Wonkies.

Cattywampus is the perfect name for this quilt! I would love to be able to make one like this, but it would bother me too much to see it so wonky while I was working on it. I would want to keep straightening it out. Looking at it reminds me that I have some of that black fabric with the rust colored cats that I had to have and never used. At least not yet. I even have the matching paw print fabric.

This looks like a happy accident to me! Love it.

It's always fun to use those strings. This is a darling quilt. Love the cat centers and bright colors and casual piecing. Like you, squaring up blocks is my least favorite thing... Well, I may have another least favorite - basting. Congratulations on a wonky top.

Fun is right! What a great quilt. :D

Oh, this is just flat-out fun! And perfectly named, as usual! Love those happy wonkies!

Cattywampus flimsy is playful and lighthearted for sure.
And after all that fun you're going to clean out the fridge!
I do that to myself too, trade off some fun time with chores to
kind of bribe myself.
Purrfect.

Happy, wonky kitties! What's not to love? Sounds like another round of purge quilting, too. If it's tripping you, it's time to stitch it up...

I would MUCH rather sew than clean out the fridge. Have fun with C-W part 2.

Oh what a delightful quilt! Now we are all going to want to make one. Maybe we should have a Cattywampus-Along....

Well I'm sure I wouldn't trip over anything as fun looking as your strips! Turned out wonderfully!

Great quilt and I'm looking forward to its sequel!

Such a fun top!

My largest square ruler is 16.5" (I got it for fifty cents at a garage sale) so that's probably the largest I'd make. One problem with the wonky strings is trimming them right at a seam, or 1/8 from a seam. Looks as though you managed, and the blocks are great! (How's the long-bright-string bin now?)