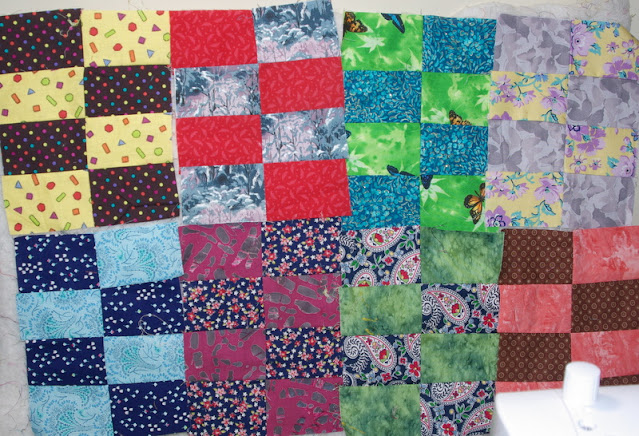 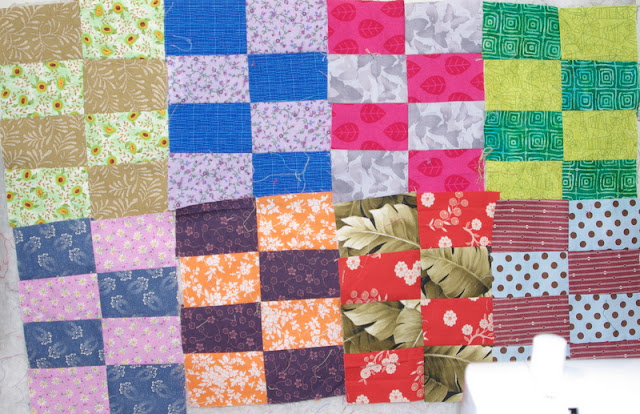 I used scraps to make most of the Nine Patch tops and blocks this month. Those scraps generated more scraps.   Now most of those leftover scraps have been dealt with.
I used 3.5 inch width pieces cut off scrap chunks to make Path and Stiles blocks as well as the Puss in the Corner blocks.  With the leftover scraps if the scrap was at least 10 inches long I cut four 2.5 x 3.5 pieces. Later I matched up pieces and made Eight Patch blocks.  This is one of the blocks I make when I have 2.5 or 3.5 inch width scraps left over from making quilt blocks.  In the old days I would have thrown all those left over 3.5 inch width pieces into a 3.5 inch width scrap bin and when bin got full I made blocks at that point. Now I try to make blocks with leftovers as I go. 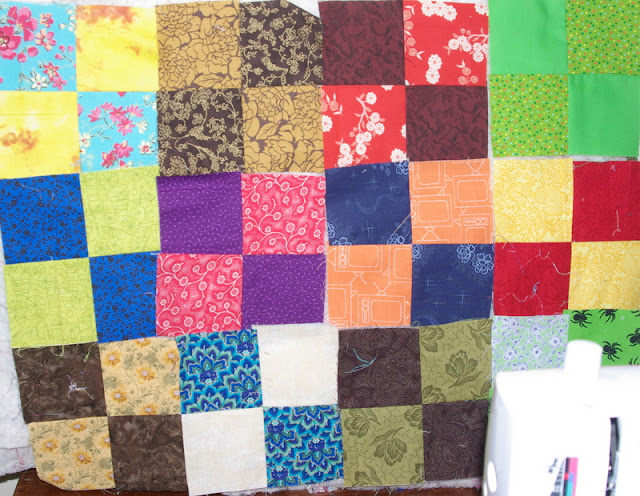 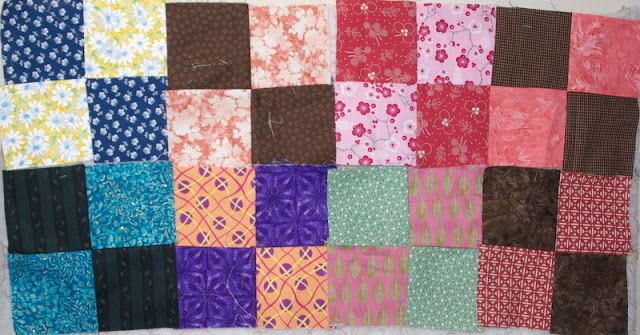 If there was a 3.5 scrap at least 7 inches long then I cut two 3.5 inch squares and made Four Patches. Last year and earlier this year I made the Four Patches with a color and a neutral and I ended up with over 60 Four Patches so I turned those into a Rainbow Scrap Challenge Project. Next year I will make an alternate QST block to go with those Four Patches.   So now I am making Four Patches in two colors. I will let them accumulate for awhile and decide what to do with them later. 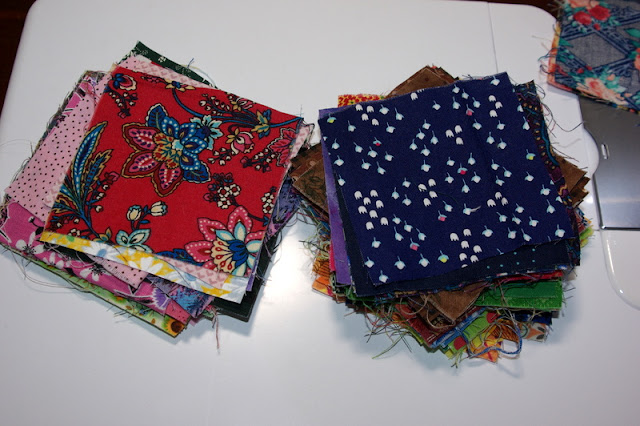 If there's enough of that 3.5 inch scrap to cut a 3.5 inch square then that is what happens next.  I have a bin with squares in all sizes that I use now and then to make blocks.  After I cut the squares I sorted through the new squares and the ones from the bin and if there were four squares in the same color and value then I put them into a pile for X+ blocks which is one of my Rainbow Scrap Challenge Projects this year that will continue into next year. The pile on the right will be used in those X+ blocks. 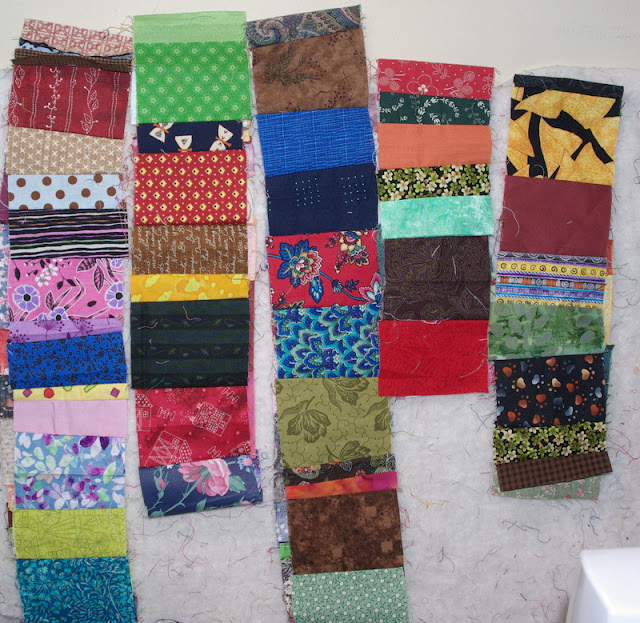 Anything left that was less than a 3.5 square but at least 1 x 3.5 inches was sewn together for a future Chinese Coins quilt. 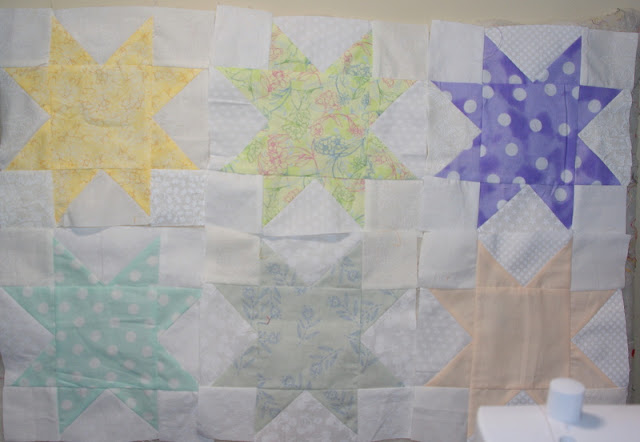 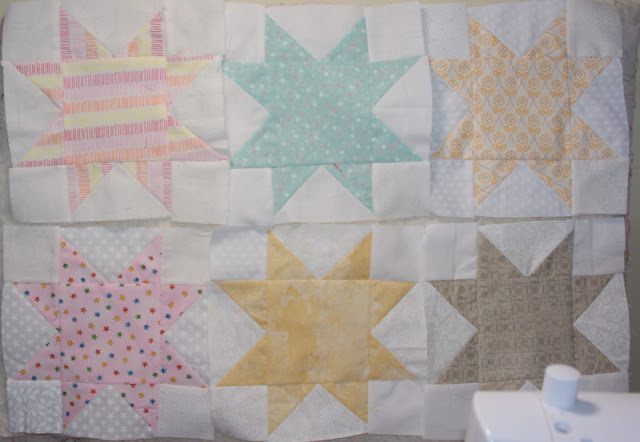 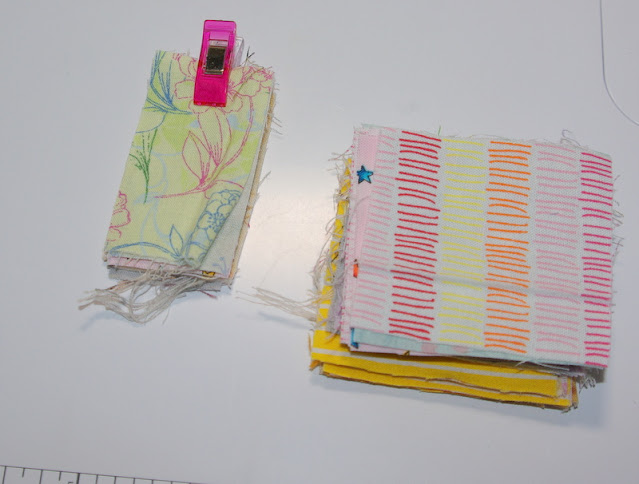 If there was enough scrap left for a 2.5 inch square for the Squares Bin then those were cut. If there was a 2.5 x 1.5 inch piece left it was cut for my box of pieces for... 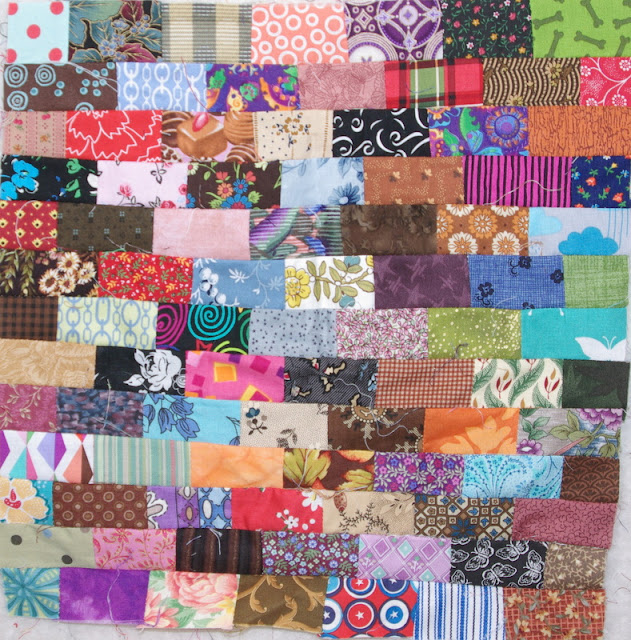 ...Lynn's Lego blocks.  When my little box of Legos builds up then I make a few blocks. This is a slow moving project but a great way to use little scraps. 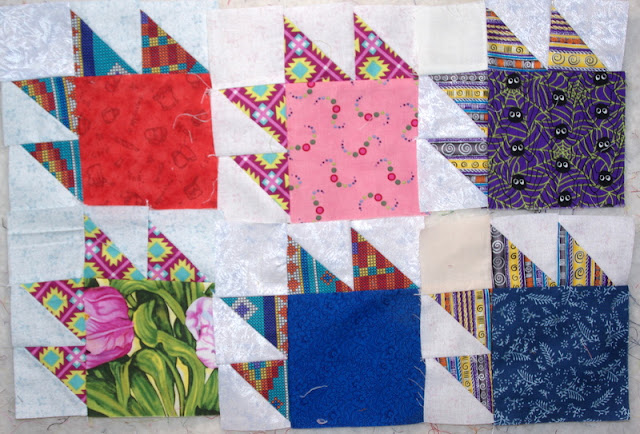 I had a few 2.5 inch width scraps left over from making the Framed Nine Patch top.  If there was enough of the scrap left to make four HSTs then I made the four HSTs and then used some 4.5 inch squares from the Squares Bin to make Bear Paw blocks. I have quite a few of them and later next year I will probably set them on point and make a few donation quilt tops. 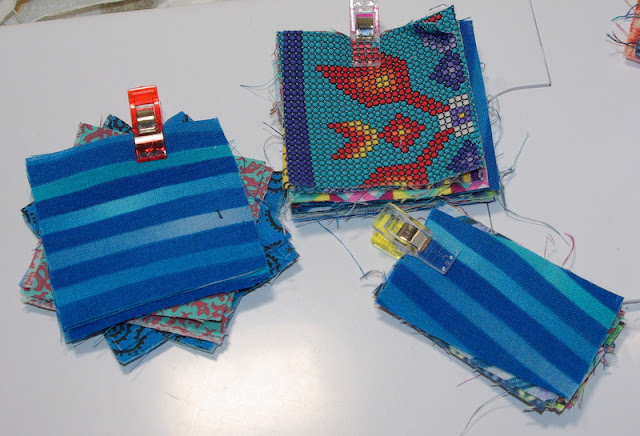 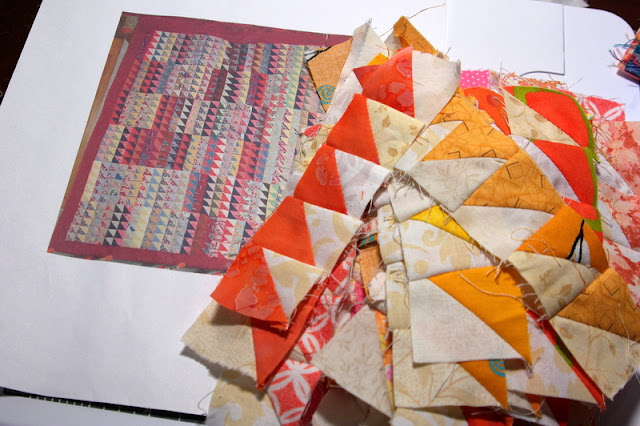 I had a lot of "flippy" corners left over from making the Snowball Nine Patch top.  I turned them into strips of five for my HST quilt inspired by a vintage one. 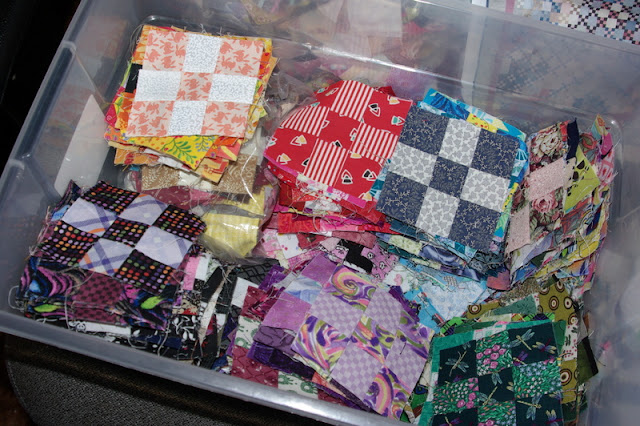 So, now you are probably wondering how many Nine Patches I have left. This is my14 quart  bin of 3 inch (finished) Nine Patches. I started sorting them by color. 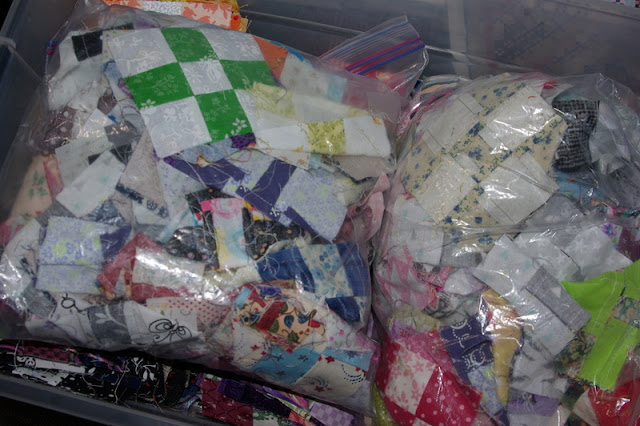 To be added to the bin the bag on the right that still needs to be sorted by color. The bag on the left has light corners so I will keep them separate and decide what to do with those later. 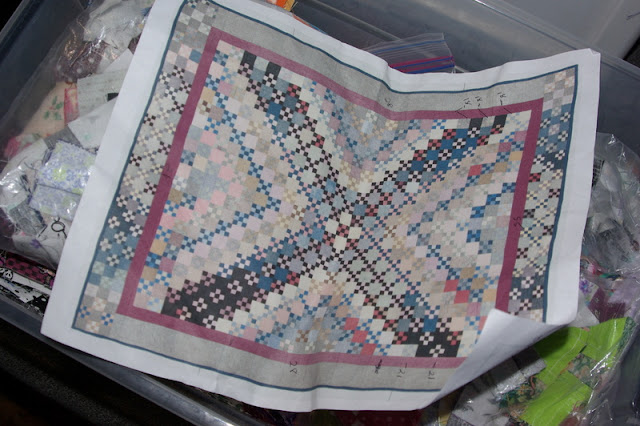 This is another vintage quilt that has me inspired. Sorting through my nine patches I think I have quite a few little Nine Patches with black corners I can use to make my version now. 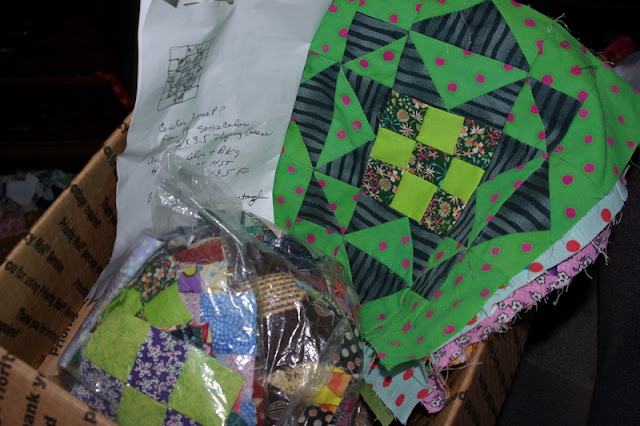 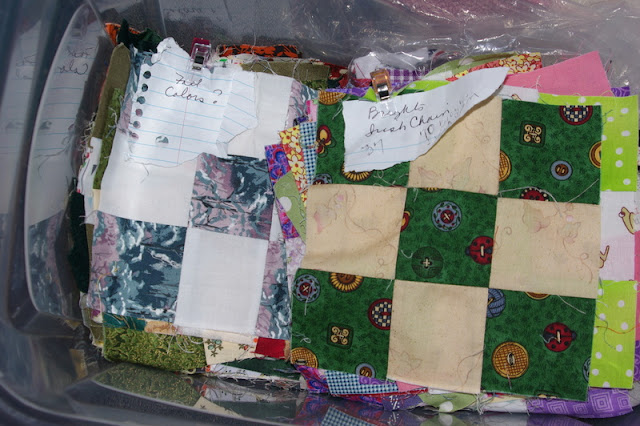 This is my six inch (finished) 14 quart bin. I decided to sort them into possible quilt groupings to see if I should continue on to make these Nine Patches when I have scraps leftover from other projects. I have a little pile of blocks that look like Autumn colors so I think I will make enough for a Snowball Nine Patch and alternate with Snowballs in autumn colors with neutral corners. I have some in bright colors that I will make into an Irish Chain when I have enough of them. 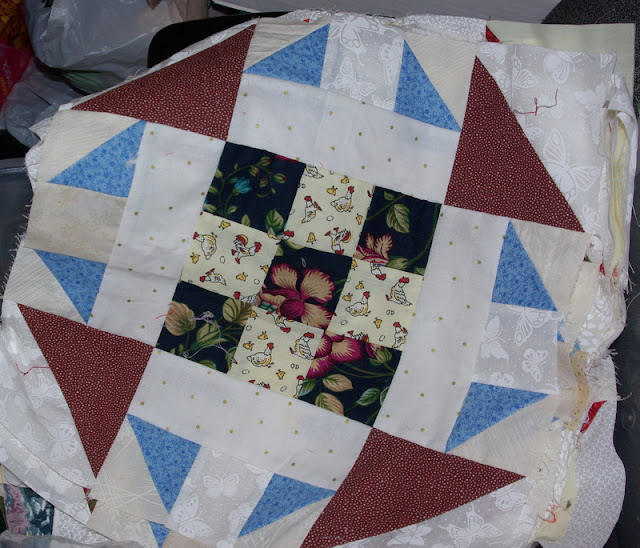 A few months ago I started turning the dark blue Nine Patches into these Churn Dash variation blocks that finish at 14 inches. I figure that 30 blocks will make a nice twin sized quilt at 70 x 84.  I have nine blocks so I need to remember that if I have dark blue 2.5 inch width scraps left over I should make Nine Patches. 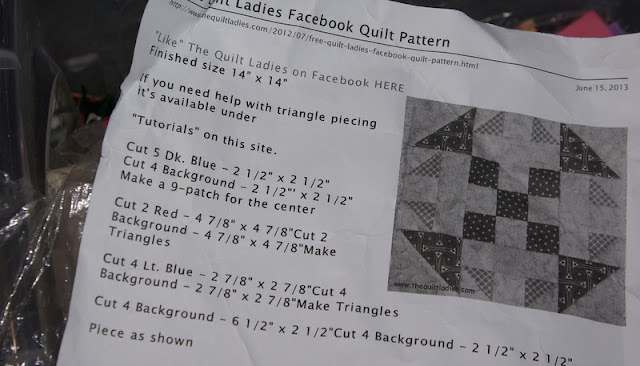 I copied off this pattern a long time ago (2013). I tracked it down and it can be found at Quilt Ladies. 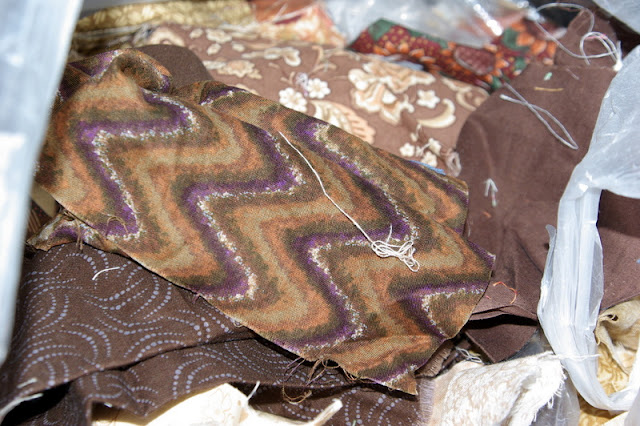 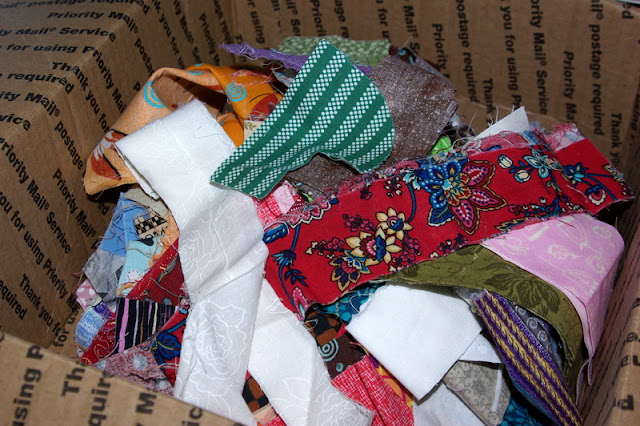 And finally I have a little box of scraps I have not processed yet. When I use scrap chunks (less than FQ or less than 6.5 inch width strips) to make blocks I end up with a lot of odd sized pieces. I need to decide if they can be cut up for squares, legos, go into the strings box or into the crumbs box.
Posted by Cathy at Monday, November 29, 2021

Holy moly girl, you have got this scrap thing DOWN! I continue to be amazed both by your thought process and your progress.

Wowzers! There you go again, scattering inspiration behind you like an exuberant flower girl at a wild wedding!
Can't wait to see all these quilts roll out!

So enjoyed reading through your Nine Patch journal. I can’t imagine how many Nine Patch blocks you had originally. And you still have loads of blocks left over from your flimsy making and more scraps to process. Wow!

I love your idea of dealing with scraps right away! What a great system you've developed. I hope to get there myself soon and in the process of choosing patterns or blocks to cut for. Do you have a "food chain" list so you know where to start cutting and progress from there?

Smiling at Gayle's fabulous visual image of you...

You are a regular scrap FACTORY! Can I come do an internship there and learn from you??

You are QUITE the scrap processor. SEW many wonderful projects on the go, Cathy!!

I really enjoyed your explanation

You have been sew busy, getting sew much made ahead of time! That last box could be made into "made fabric" scrappy kind of like a crazy quilt block. impressive job of trying to keep those scraps in order.