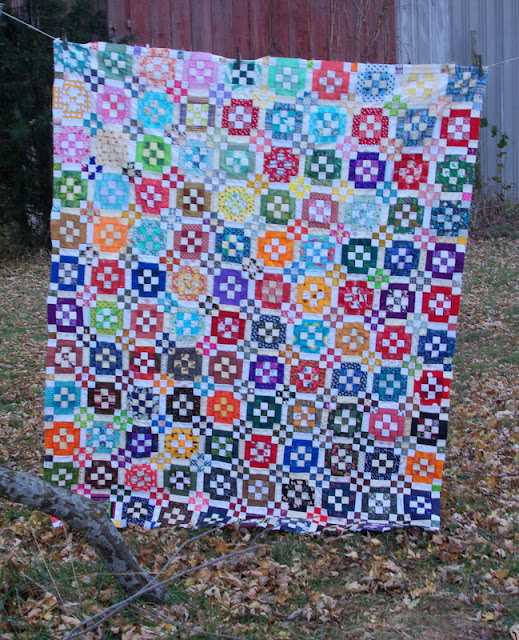 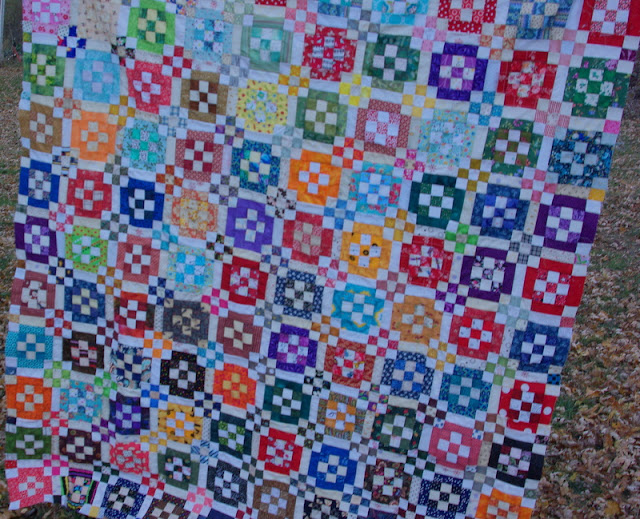 I have declared it "Nine Patch November" at my house. This month I've been working on Nine Patch inventory reduction- both 3 inch and 6 inch Nine Patches.
For this one I used 3 inch (finished) Nine Patches as the center of Uneven Nine Patches (aka Puss in the Corner blocks).  I used Nine Patches from inventory with dark corners and centers and lights for the other four pieces. Then I tried to match up the border pieces with the fabric in the Nine Patches. I was able to use a lot of the scraps of the scraps left over from making the Path and Stiles blocks in my previous post. 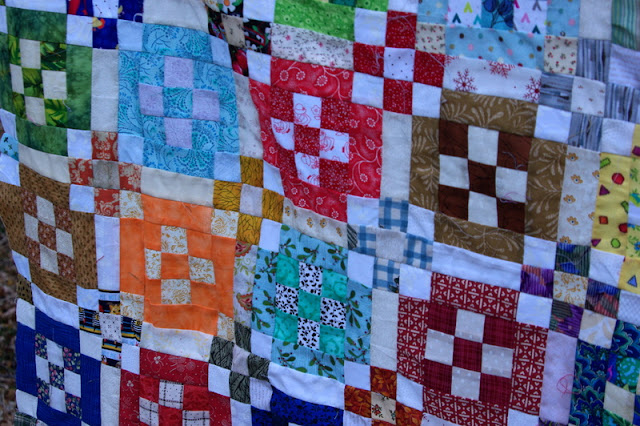 I added sashing between blocks that formed little Nine Patches with light corners. It was not easy to keep all those little pieces in the correct order between adding sashing between columns and rows. 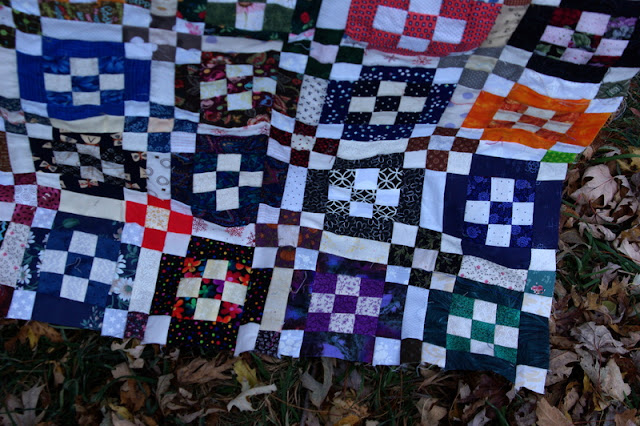 I don't have a design wall and more or less sew blocks together randomly. In this case I tried to keep the lighter blocks on top and keep the darker blocks for bottom rows. I just do this as I web together blocks. The sashing added another whole dimension to the way I usually work - I also had to think a little bit in order to form those little Nine Patches in the sashing. I don't normally add sashing or borders to my quilts. But this time I think it was worth it and good brain exercise. 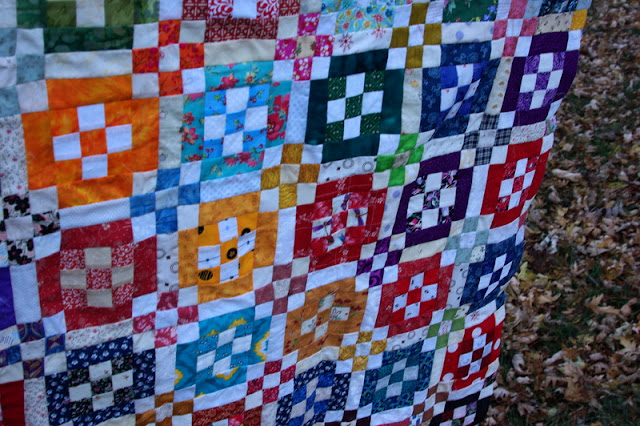 And now my inventory of 3 inch Nine Patches is 120 blocks lighter. BUT the bin is not empty.
Peacock Party at Wendy's Quilts and More
Posted by Cathy at Friday, November 26, 2021

What an amazing quilt! All those blocks, each containing so many small pieces. I’ll have to get my calculator out to work out how many individual squares and rectangles there are in tour flimsy. Great work.

Love this one too!!! ALl that crazy color is amazing!!!

It looks like a flower garden! And that sashing was totally worth all the brainwork! It's gorgeous!

All those cute nine patches, mind boggling how it all went together! Congratulations indeed!

Wow. that's a ton of little 9patches. It looks great.

What a wonderful design. I would probably go crazy trying to make the 9-nine patches in the sashing all match. You did a great job.
Pat

what a beautiful quilt!

How many great quilts started with the phrase, "but the bin was not empty". This is such a fun pattern. Looking forward to seeing your next nine patch creation.

I love this, so bright and cheery! Your variety of 9-patch quilts is amazing!

All that and the 9-Patch bin STILL isn't empty, Cathy?!?! Well, you certainly made a valiant attempt at clearing them out. Congratulations on another lovely quilt top finish!

holy moly, all those alternate 9 patches in the sashing....that is some DEDICATION. But the end result is great - makes a pleasing puzzle for the eye to figure out. Love it, great job!

You made such a lovely colorful quilt there!