Three Tops and Then Some 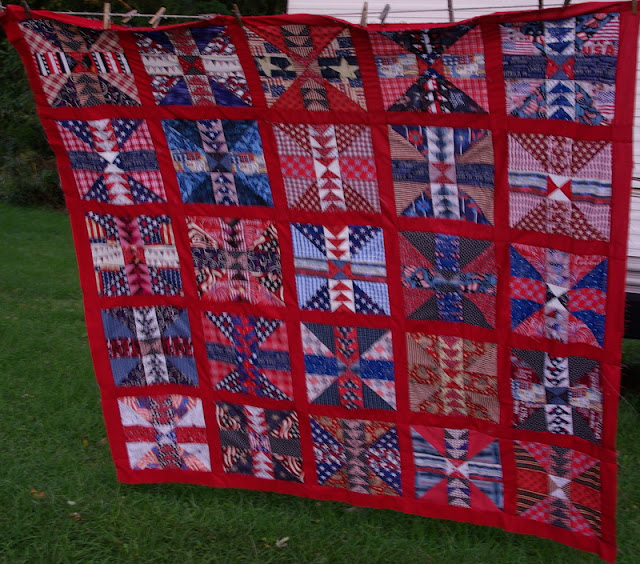 I decided to finish up a few UFOs that use patriotic themed  fabrics. It was a blustery day when I ventured out to take some pictures so some are rather blurry, darn it. (sigh)

This was inspired by a vintage quilt and was a quilt along last year with Mary Elizabeth Kinch. I see she has removed the block instructions now but... 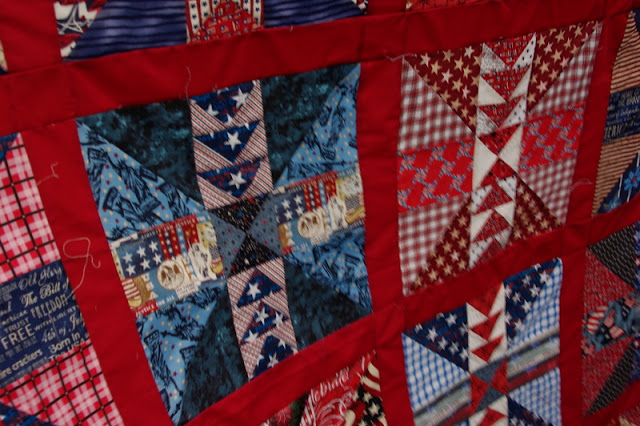 ...I think the traditional block name is Chain and Bar and a free version of it can be found at Quilter's Cache. 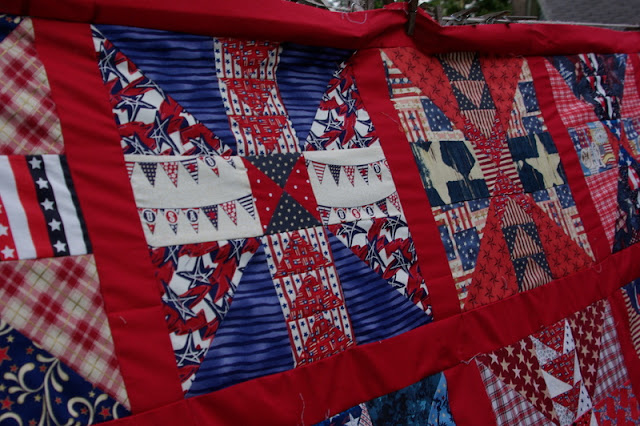 I made all of the blocks last year but then stalled when it came to the sashing. I really, really, really, really don't like to add sashings or borders to quilts for some reason. I think I would rather make a thousand more blocks than add sashings or borders. It's just not my thing to do although I do admit that some quilts just need one or the other or both to look complete. Anyway, so the blocks have been laying at the end of my ironing board all this time with a piece of red yardage to use for the sashing.

Now that I've completed this quilt top I have to admit that the end of the ironing board still has a pile of stuff on it but that's a different story for a different day. 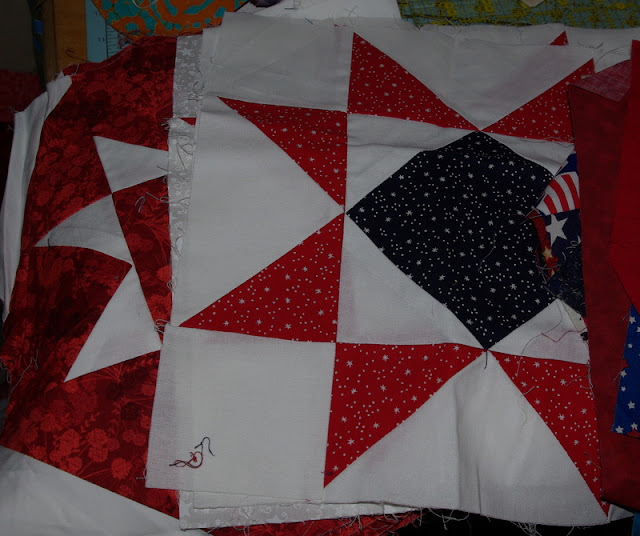 Next up I was sorting through the very fat and overflowing orphan box (aka orphanage) and pulled out some red/white/blue and patriotic themed orphans. 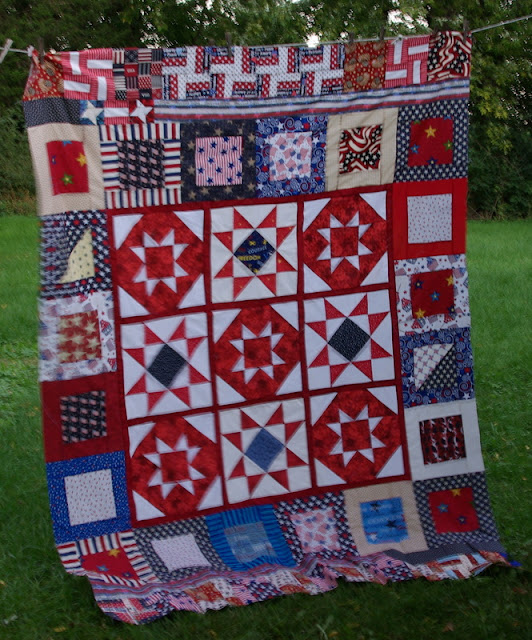 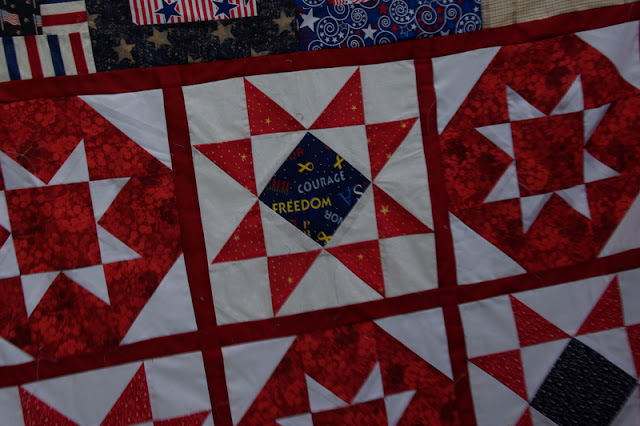 Hey, perfect...nine stars. Four of the stars were left over from a Quilt of Valor I made in 2013. And those blocks were actually from a swap earlier than that so those stars are almost vintage.  The other stars called The Dandy Quilt  I made for a red and white swap but then realized I used sateen for the white and wasn't sure that would be acceptable so made different blocks for the swap.  Ok so add the dreaded sashing and I had a forty inch center.  Next I found I had ten inch Happy Blocks almost enough to go all the way around the center.  These were also orphans left over from a different Quilt of Valor I made in 2013.  I had to make about five more blocks and used a couple of six inch HSTs from the orphanage as the centers for a couple.  By then I had obtained my desired sixty inch width but needed to add some length. 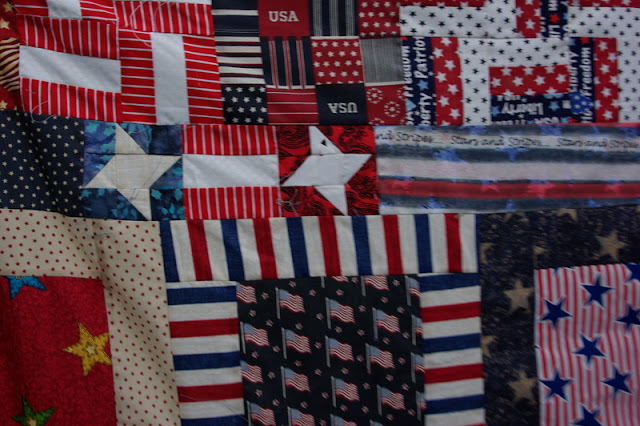 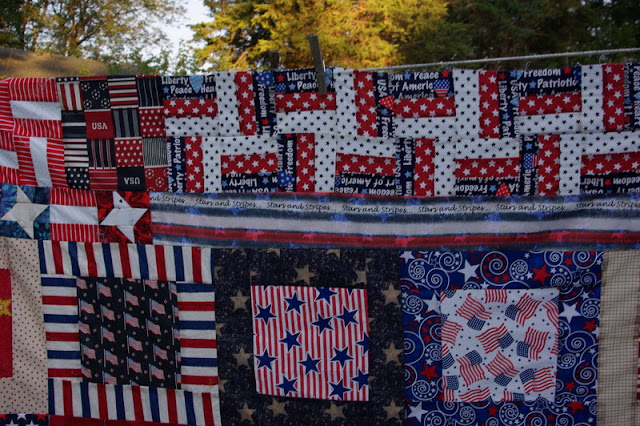 I even deconstructed a couple of 12 inch Disappearing Nine Patch blocks to use in the six inch bottom border (not shown here).

So with this top I only had to make a few blocks and I had a whole quilt top and the orphanage was a little lighter. 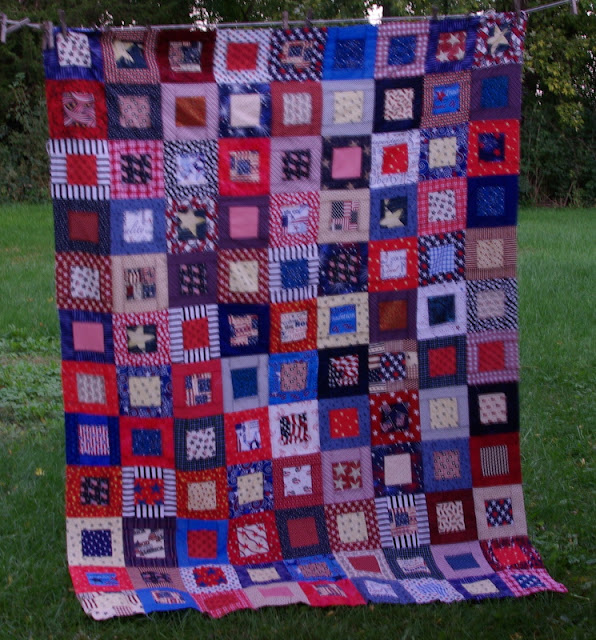 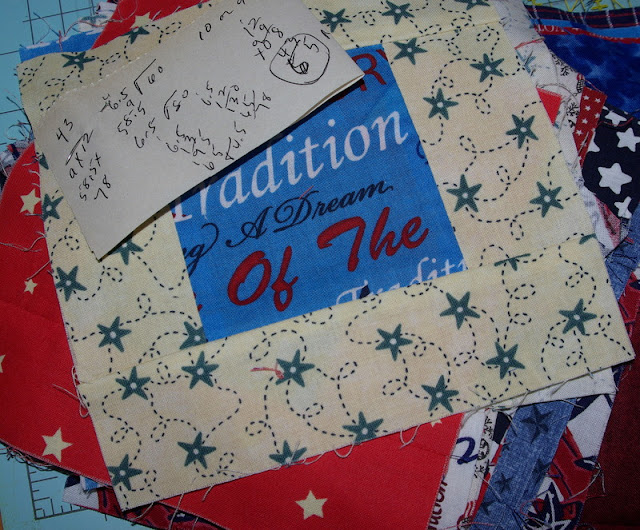 This one came out of a Happy Place (aka box of partial sets of Happy Blocks) - a partial set of really old swapped blocks with a patriotic theme and in a weird size.  Way back when postage was a whole lot cheaper I participated in a lot of online swaps. One of the groups swapped Happy Blocks in a different theme three times a year. The centers are four inch and the sides are two inches which makes for a 6.5 inch finished block. 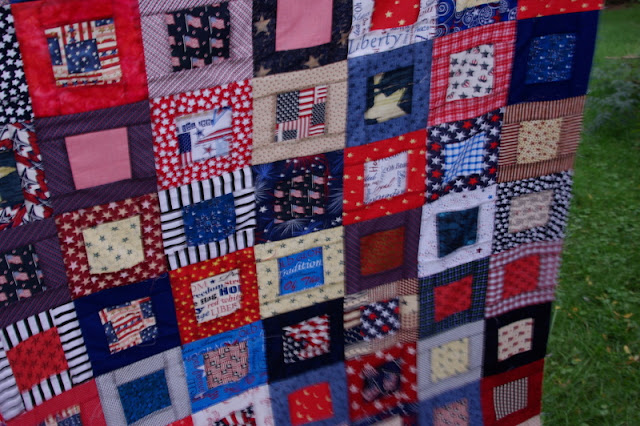 I had forty-three blocks... 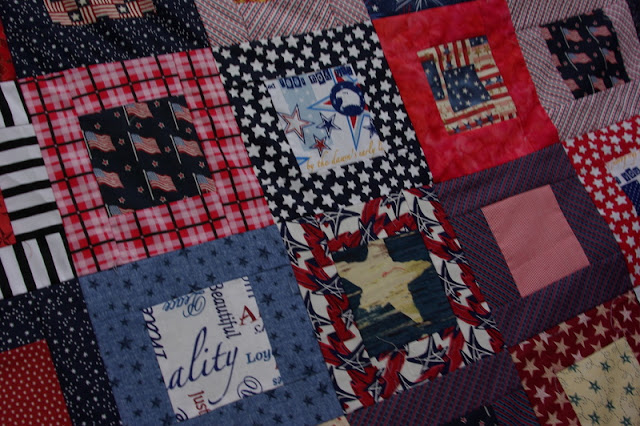 ....so I made sixty-five more and then made them into a top.

And now the Happy Place is just a little bit lighter too. (I found a partial set of nice Autumn themed blocks in there too so those may end up in a top soon...MAYBE). 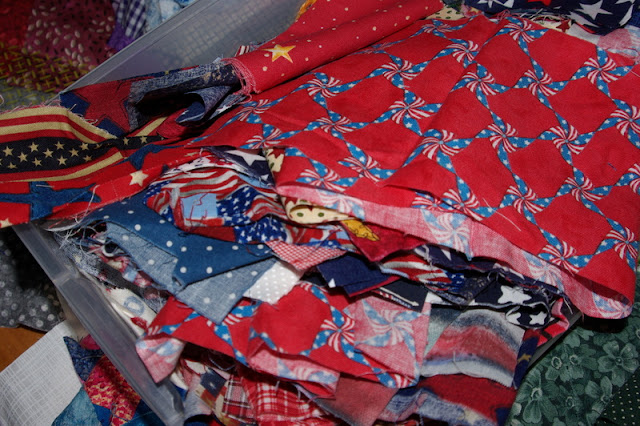 The Foothills quilt left me with a lot of five inch scraps I've kept in a bin along with other patriotic themed scraps. I'd been wondering what to do with them for quite awhile and then I came across... 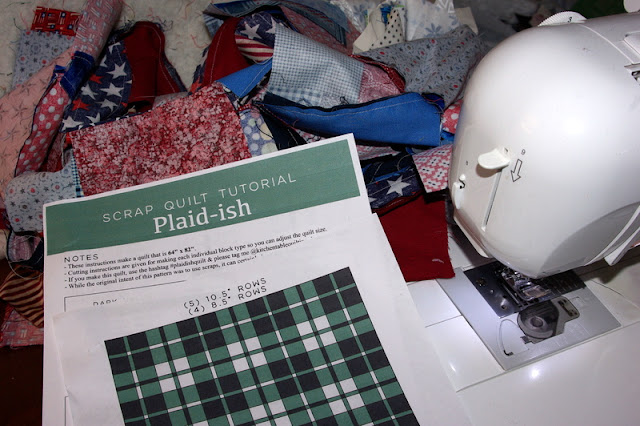 ... the Plaid-ish quilt (free tutorial at Kitchen Table Quilting) that calls for a lot of five inch pieces. So I have cut and chain pieced all of the block rows and now just have to sew the block rows together and then assemble the top.  The patriotic themed scrap box is almost empty. The few pieces left in there will be sorted into the other scrap bins I have based on scrap size. 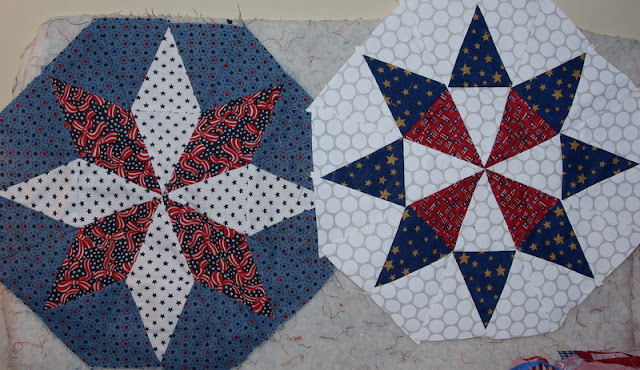 Finished or Not Finished Friday at Alycia's Quilts

where, as you can see from her blog post back then,  I sent those QOV quilts I made back in 2013.

Peacock Party at Wendy's Quilts and More
Posted by Cathy at Friday, October 11, 2019

Feels good to move it out, doesn't it?

That’s a lot of adoption of orphan blocks! I’m feeling the need to dig in my RW&B box!

Your creativity knows no bounds! Did I spy the Evening Star block from Quilters Cache in that kaleidoscope patriotic UFO pic? Congrats on facing your fear-of-sashing (sashaphobia?) and making that wonderful Foothills quilt. Sandy at sewhigh.blogspot.com

those are soo pretty and for such a worthy cause...win/win!

I love that first quilt, and the second one also. The others are very pretty too, but that first one really speak to me. Those last blocks are special too, and will make a beautiful quilt. I'll be watching for that one! ---"Love"

So, your orphanage and Happy Place are a little bit lighter after THREE Quilts of Valour quilt tops! These are just the red,white and blue blocks. How many other blocks do you have on hand........yellow, pink, orange, brown, grey, black, brown, turquoise etc etc. The mind boggles! However, congratulations on three super quilts, such clever inventions. I have been waiting for some surprise flimsies as you have been quiet on the blog front all week.

Wow!! Great job - and they are all so patriotic!!

The weather this week has been conducive to getting season ending outdoor chores done, so there's been little sewing here. Seeing all your finishes makes me wish for the freeze so I could get back to the sewing machine. Not that I have boatloads of orphan blocks to work with. Do you make Happy Blocks on a regular basis without a project in mind? You seem to have an endless supply.
Pat

They are all fantastic! I always look forward to your posts!

I love how you got in a RWB mode and just kept rollin' rollin' rollin'! You know I love the mixed orphan one especially. I'd like to link to this post when I write about this style of quilt; is that OK with you?

Forgot to add: I've printed a copy of Plaidish, too. It looks like a super pattern for scraps!

Three fabulous quilts! I love the block in the first one. Very unusual. And the red sashing is perfect. Orphan block make some of the most interesting quilts. Yours is no exception. Happy Patriots is just lovely!