Something Old. Something New. 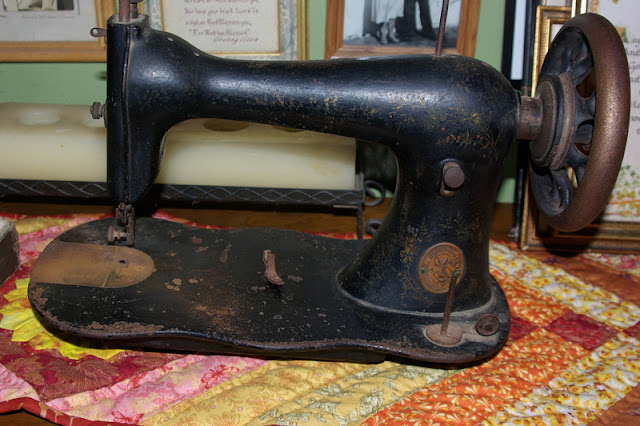 This is my husband's grandmother's (Celesta Leona Westendorf Petersen 1894-1970) old treadle sewing machine. It was in a cabinet but I took it out so I could fix a hinge on the cabinet. I'm also going to fix up the sewing machine so I can use it. Almost everything is in good shape except for some rust. According to the serial number 6956164 it was manufactured in 1885. 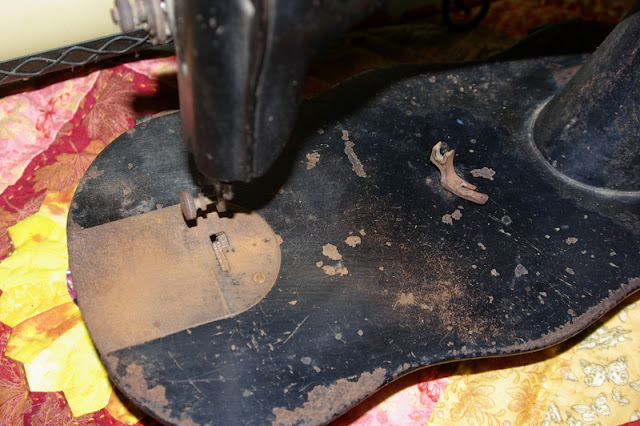 I've started using steel wool on that needle plate rust. I may wait until it is nicer outside and go out and use the Dremel on it. The rust is so bad that the needle plate parts are fused together. If I can get those pieces apart and off I can soak them to clean them.  As far as moving parts...everything moves. I needed a new belt for the treadle and I've received that.
From my research I think this is an 1885 Singer Improved Family Model 15-1 treadle with an oscillating long beak shuttle, lock stitch drop feed,, serpentine fiddley shape bed plate and old style (simple) bobbin winder. Apparently the bobbin winder is missing. From research I have read that some folks use a sidewinder to wind bobbins but I will still go in search of a bobbin winder for this one. 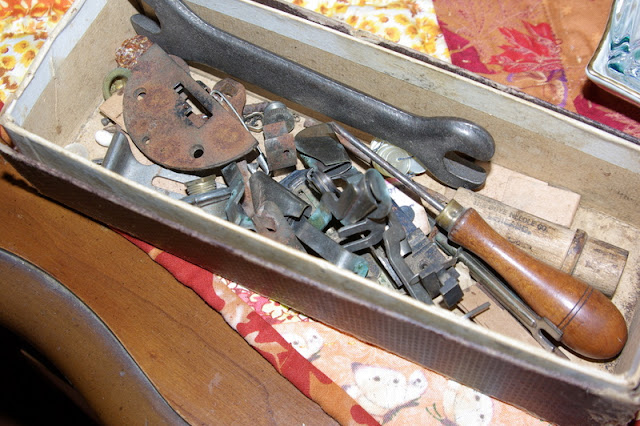 The two drawer cabinet contained a box with some parts most of which I think I have identified. 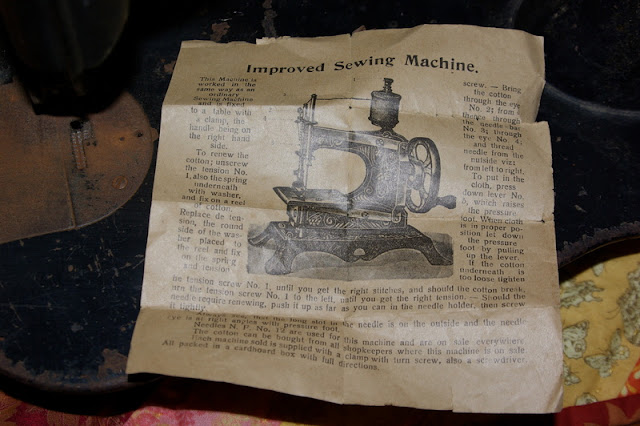 It also contained this old paper about the machine. I thought at one time I saw a sewing machine booklet but don't see it now but I did find one on line. 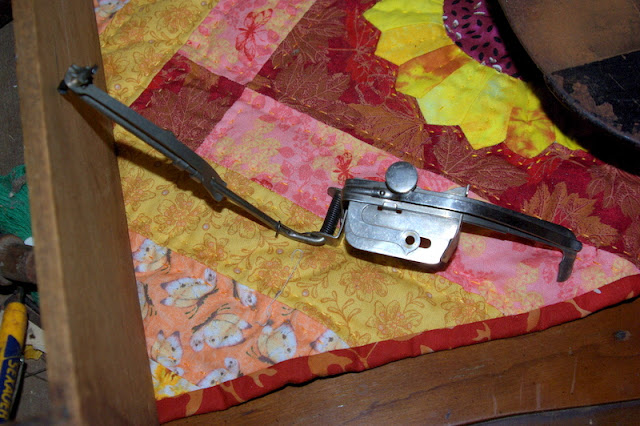 I'm not sure what this thing is. Any guess? 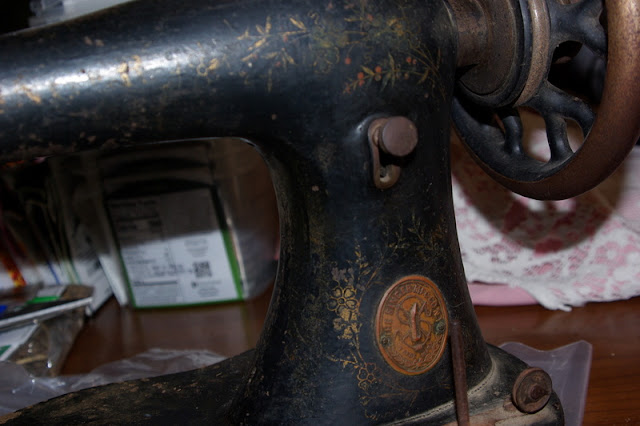 I decided to dig this one out of storage and fix it up so I can use it because I seem to sew too much for today's machines and wear them out after a couple of years. At least that's what the Janome and Brother repair men have both told me. Sew too much???? Really?????
More on this one as I move along on my new project.
I'm also going to dig out my old Kenmore and clean it up and oil it and find room for it in my sewing space. It's in a flimsy old fiberboard cabinet so I may have to do something with that. But Old Kenny is very reliable after all these years. I think he's been around since the 70s and was mostly used back when I made most of the clothes for our family and several Barbie Dolls.
My last Brother sewing machine went in for repairs once again in January and I instead decided to put it to rest. When a machine goes into the shop for repair multiple times a year the costs start to add up. I've been sewing on an old Janome but it sure has a lot of tension problems and is the reason I bought the Brother. That and the fact that it was a very long trip to drop the Janome off for repairs.
I bought a new machine. 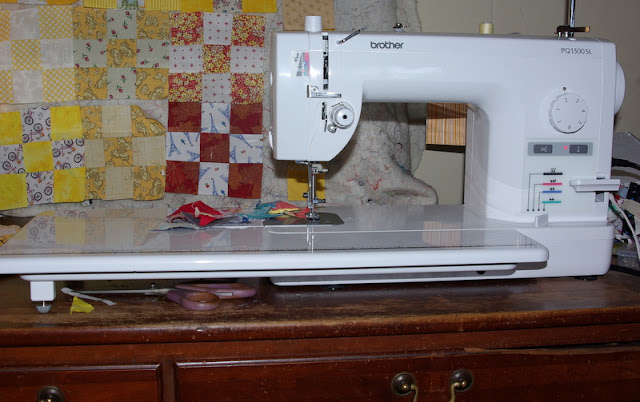 Brother PQ1500SL. It's nothing fancy but I think it will stand up better to "too much sewing". And I can easily oil it and maintain it myself I think.
Posted by Cathy at Tuesday, March 02, 2021

That old machine is a treasure - good luck bringing it back to life. And congratulations on the NEW machine -may you have many many productive happy hours using it.

Good luck getting this old gem ready for a new lease on life. That button you asked about might be the stitch length regulator?

I think you will find that machine is all you need. I have the Babylock version and it has never been repaired and I think it is 17 years old. It is the quietest and most heavy duty machine I have. Besides that it has a nice large opening for quilting. My only beef is my quilts get caught on the left edge corners of the table sometimes. I have a large teflon pressing sheet that I might tape on the machine table and let it drape off the left edge and tape it to the table.

it's sad but the older machines were made much sturdier...my old viking 43 years old finally got to the point where no parts are available....so had to go with a newer babylock, nowhere near the workhorse the viking was....a sad commentary on our times...rockets to mars? no problem...study affordable machine? not so much....

Good luck with your machine. I hope you’ll share progress on your treadle

I don't know what the part is used for, but it is super cool that you are going to bring this baby back to life! :)

I collect, restore and frequently use vintage and antique sewing machines. Your older sewing machine is a Singer Improved Family. Email me if you would like a copy of the manual. These machines were designed for the user to maintain.
I use Evaporust on rusted parts. Evaporust can be used over and over. Be sure to oil or wax the derusted parts soon after removing from the liquid.
Once cleaned, oiled and adjusted, your IF will sew for another 100 years.
I've used a BabyLock QCP which is similar to your Brother, for over 20 years and it continues to sew anything that I put under the needle.

Best of luck with your new machine, Cathy.

I think the trick to finding reliable machine is buying one with solid state (metal) inside parts instead of plastic. Most of the lower-end models have plastic. But for sewists and quilters like us, the investment in a solid machine is well worth it. My repair people always comment on the million or two million stitches that I put on the machine every year (there must be a counter that we can’t see). I have a 1916 Singer Treadle in excellent shape except for a belt, which I need to order. I loved my 1974 Kenmore until the motor finally failed about 3 years ago. Like you, I sewed everything on it - clothing for me, hubs, three kids, plus stuffed toys, slip covers, curtains, pillows, costumes, etc. Now I love my almost-10-year-old Bernina 550QE. I have a backup Brother and the treadle. I’m content!

I hope the new machine works out better than the last one.

So, your machines would last longer if you didn't sew so much. Them's fightin' words. But looks like you have enough to keep you busy, between cleaning up the treadle and learning a new machine. Oh, and sewing occasionally.
Pat

Good luck with renovating the old sewing machine. It would be great if you could get it back into workable shape. Glad you decided to buy a new machine. The machine guy’s comment about you working your machines to death made me smile. I shouldn’t think he’s ever met anyone who sews and uses their DSM to quilt them as much as you do! The surname, Patersen, of the original owner of the machine sounds Scandinavian, Sweden?

Great people powered machine! If you haven't already discovered it, here's a link to the Treadle On website - devoted to restoring and using old sewing machines: https://www.treadleon.net/. Check out the page entitled Sewing Machine Shop. There's also a link to the Treadle On mail list, which you can join to ask questions and learn more about old machines. It's an active list with lots of friendly and knowledgeable folks.

Good stuff! It's kind of fun to bring back old (vintage) machines. I was given a 1966 Singer all metal machine which needs a lot of TLC. It weighs at least 100 lbs so when it does get on the table -it stays. Lol. Still trying to fix. Can never have too many machines or sew too much!!!

Congrats on the new machine!

I sew on old Singers for just that reason - a bit of oil on a regular basis, all moving parts are metal and no little plastic bits to break. I've never tried a treadle but will be interested to hear how you find it.

Refurbishing the treadle sounds like a great project. I'd like one myself. And congrats on your new machine.

Happy tinkering with the old machine! And then I hope you get much enjoyment sewing with her!
I've been eyeing that exact Brother machine for a while now, with much dithering over whether I actually **need** another machine... Please let us know how it behaves for you!

I have a hubby who is great at figuring things out, and he keeps my 45 year old Viking running. That's a workhorse! I also found an old 1929 Singer 66 out at the street and he's brought it back to life with a motor and a few other parts and it sews like butter! My third machine is a Janome 7700 and I've had nothing but problems with it....I wish you luck with your old and new machines!

I think that's really neat that you're overhauling the treadle machine. I'm sure hubby's grandmother is delighted watching you put it in working order!

My dad found me an old Singer treadle machine, still in the cabinet, and my husband fixed it up for me recently. I haven't really mastered it yet but I'm excited to use it. Congrats on your new machine, I hope it holds up well for you!

If you take another look at the treadle you are cleaning, and then the piece of paper with the Improved sewing machine, you will see that they are very different. As a child I played with one similar to that Improved machine, which only does lock stitch, so no bobbin needed. If you tire of cleaning those parts you can find new parts to replace them, online.

Hello,
Do you have trouble threading your new Brother machine? Reviews of the machine are good, except for the complex threading.
Thank you and I really enjoy your blog.
Kathy B
quiltnurs@yahoo.com

An acquaintance in our community is a commercial crafter and sews constantly. After burning out "regular" machines she has gone to a semi-pro. I think this one, or the Elna version. https://www.janome.com/machines/sewing/mc6700p/