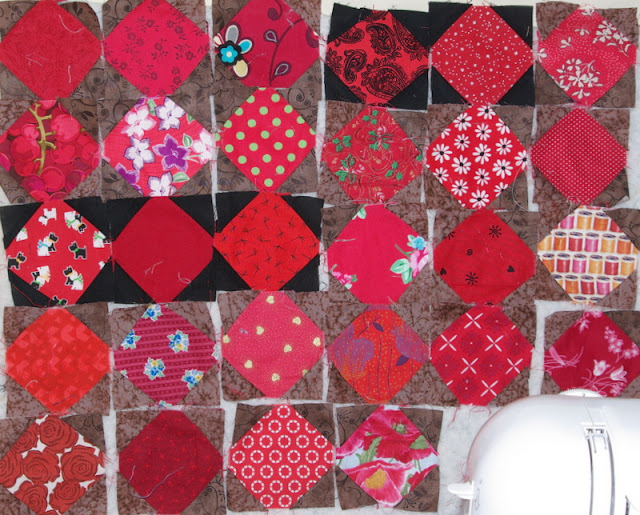 I guess it's about time I try to figure out what to do with them so I know how many I need. 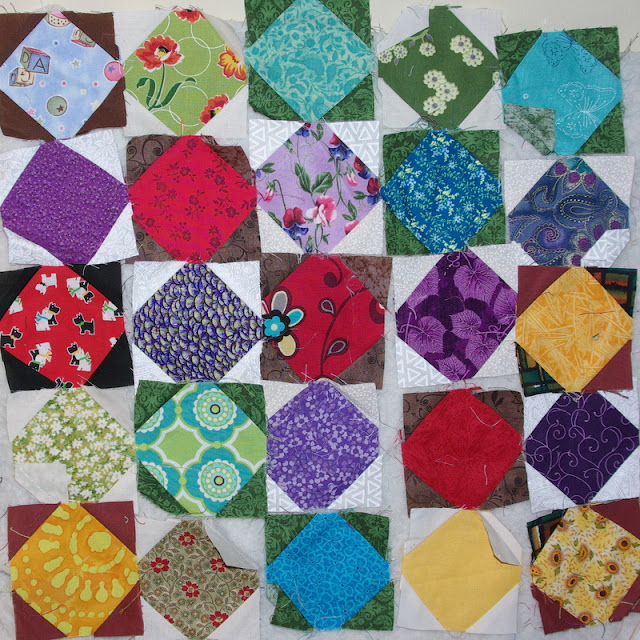 Originally I was thinking I would alternate light and dark corners - a look similar to a lozenge quilt I made a couple of years ago.  I love that quilt and it currently resides on the bed in the camper. 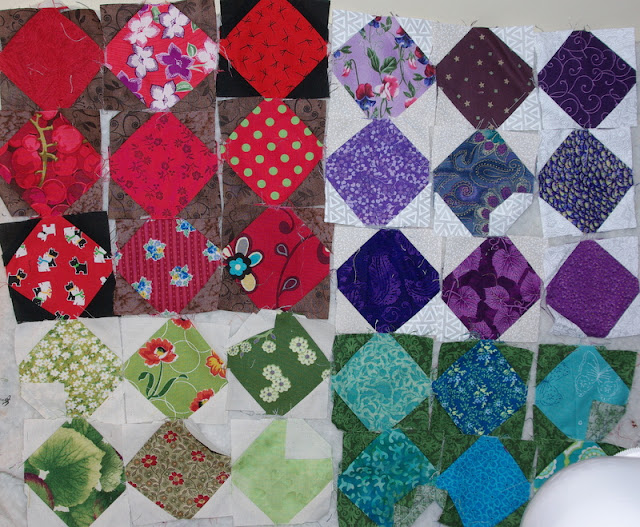 But each month when I took photos and blogged about the blocks I began to be attracted to a nine patch block and started thinking this might be the way to go.  I think I like this arrangement better than mixing them up. 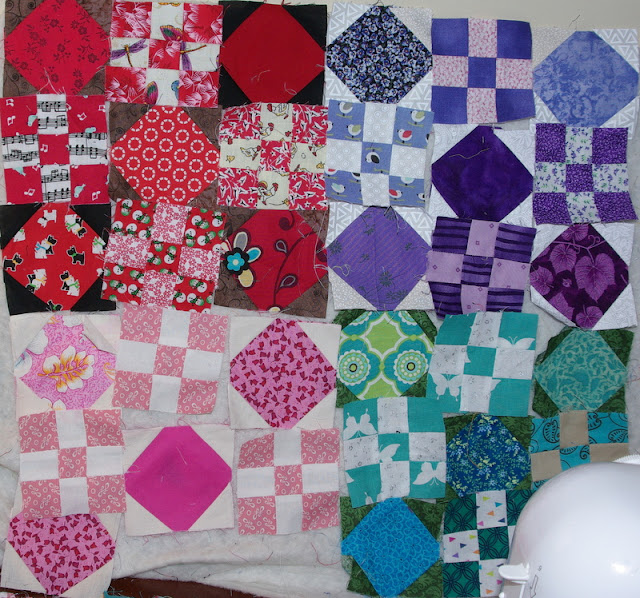 But what if I changed some of the blocks out with some nine patches? I have a bin of three inch nine patches and have been looking for different ways to use them. 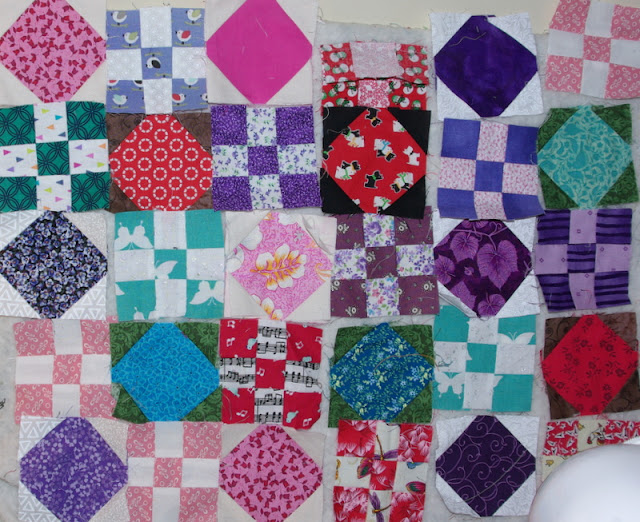 What if nine patch and snowball colors were just alternated?

Snowball/Nine Patch quilts are too common. 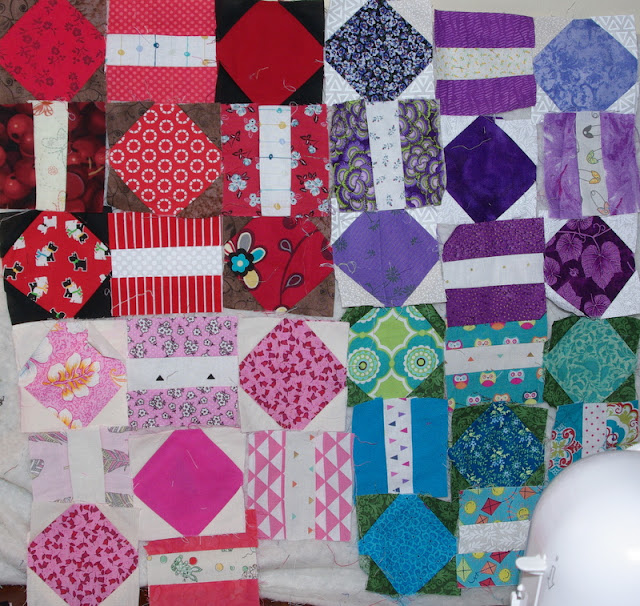 Let's go back to keeping the same colored snowballs in a nine patch configuration but this time replace the snowball or little nine patch with a rail fence block. I've also been making these for a couple of years from my 1.5 inch scraps.

Ok. I kind of like it but I think I like the nine patch blocks with all snowballs better.  Or do I? 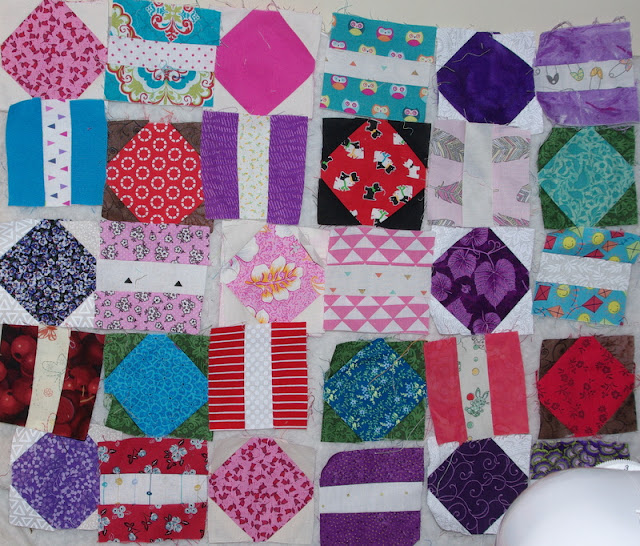 Let's mix them up. 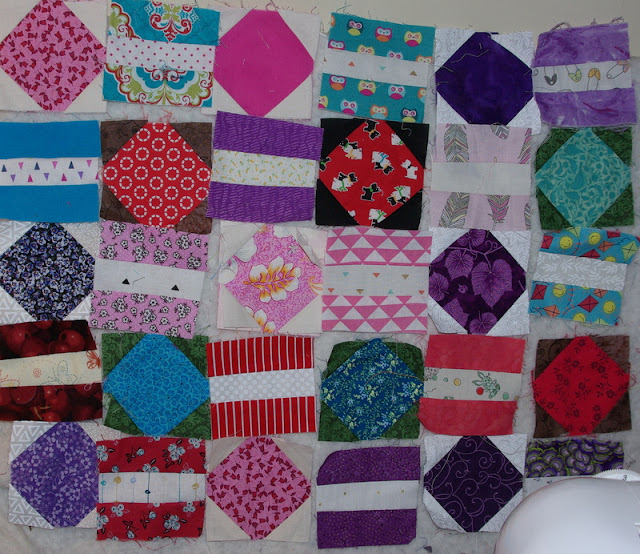 Let's mix them up and keep all the rail fences horizontal. 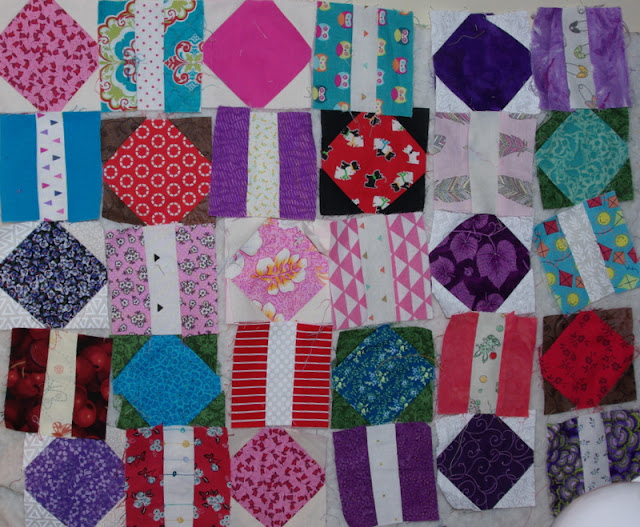 I think I like them mixed up with rail fences all vertical better.  Maybe if I just used the light cornered snowballs?

Still undecided on layout or how many blocks I need.
Still playing......

You have so many GREAT variations! Makes me want to go sew

Even more fun than playing with Legos!

Or ... or ... Lots of great options. I look forward to seeing what you decide.

I like the 5th version down the best, for what it's worth. Your Lozenges quilt is gorgeous! I've often regretted not making that one. It's amazing what you can do with scraps. And to think some people throw them away.

They are all beautiful. I can't believe you work with such small pieces!

I know which combo I like best, but the decision has to make you happy. Hard to go wrong with so many great building blocks, though!

You could spend all day moving around blocks. I will say I like when the colors are grouped together. I look forward to seeing what you end up using.

So many options. So difficult to choose!

So many wonderful ideas! My favorites are the 9-patch groupings of like colors, either with the 9-patch blocks or the rail fences.

Looks like fun to consider all the different possibilities!

Go, Cathy, go! You’re always a fountain of ideas, and I know that whatever you decide on will be fun and colorful!

Not that my opinion carries any weight, but I really like #5 myself too. That is what I would make. Gut do what you want, and we'll love it anyway. You do beautiful quilts.