It's a Flimsy! With No Clever Name No Name
I forgot to measure it but I THINK it's about 78 x 78
It's a Puss in the Corner block set on point with 3 inch nine patches for centers and stripes for sashing.
It was inspired by a picture of a Susan McDermott quilt found in Quilt magazine. 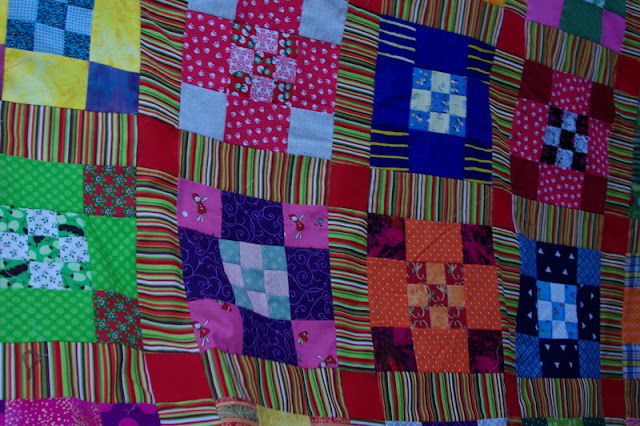 I had the nine patches already made. I used some 2.5 inch scraps and scrap chunks for the sides of the Puss in the Corner block and all of the corners came from the 2.5 inch scrap bin. 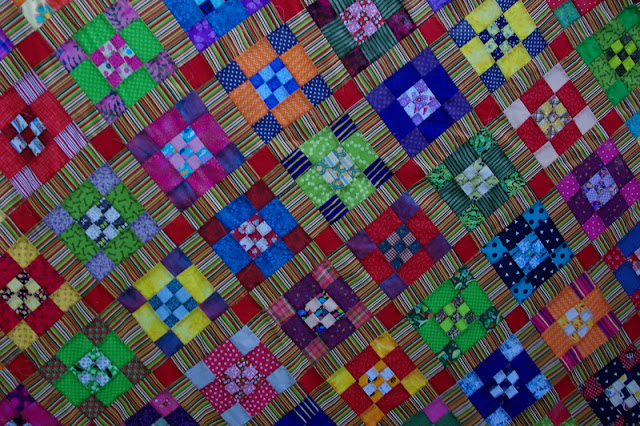 One of the things I loved about the quilt was the striped sashing idea.  I hunted around in my stash and found ONE larger pieces of striped fabric that I bought for a donation quilt backing.  Would it work? (Probably...I'm trying to make do and use stash for as long as possible). Would it be enough? (After piecing together some strips).

This is the second flimsy within the last couple of weeks that used little nine patches. The other was a zig zag nine patch (which also has no clever name). 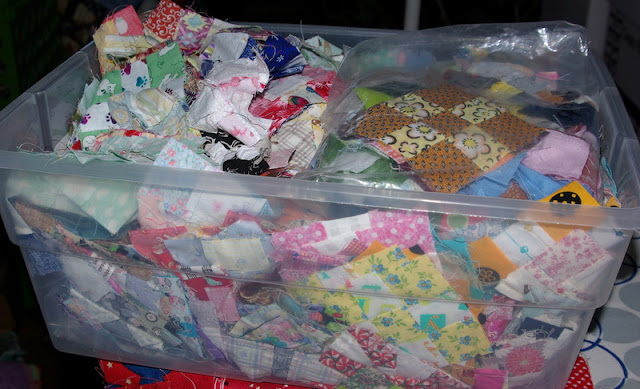 Someone suggested they would like to see how many nine patches I have left after I mentioned I would be off searching for more quilts to make that use them.   Well, here's what's left now - a 16 quart container of them. (Why not just label it as a four gallon container?) 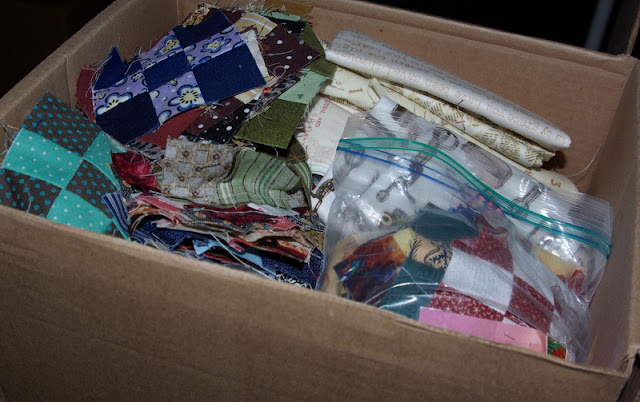 That's not counting some darker ones I have set aside in a project box... 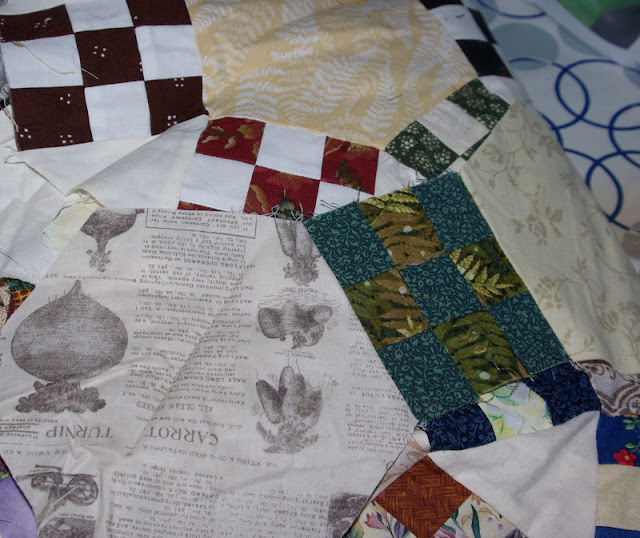 ...to complete a Jack's Chain.

And now that I've taken it down from the top shelf I guess I should work on Jack's Chain again.

It seems fair to say you like making 9 Patch Blocks!!! What a great way to use up your scraps. Your latest quilt is wonderful with the striped sashing.

Needs no clever name it's fantastic all on ir's own! Love the striped sashing really adds pazazz !

How about Cat on Point....a play on dogs on point/puss in the corner? It's beautiful and the striped sashing really makes it sing!!!

I love this! Good job! No name necessary.

I just love these scrappy nine patch quilts! You are the bomb! I thought for sure that I had commented on the 9-patch zigzag quilt because it just about stopped me in my tracks. Alas, no. I often read through the blogs early in the morning on my Bloglovin' app but don't like to comment via there. You are such an inspiration CAthy! Love how you take all these random bits and pieces and make such lovely quilts.:)

Love it! So much color - it reminds me of Starburst candies!

Love the stripy stripping! I do believe you have more 9-patches than I do - yay! But you are getting something done with yours, and that's a big plus.

I just love all the colors. I might not have chosen that sashing but it is lovely. Just perfect for the quilt!

Love that stripe for sashing! It really ties all the fun, bright blocks together. All sashing does that, I guess, but STRIPED sashing does it in your signature style: crazy (like a fox)!

Meanwhile, your stash of nine patches has boggled my mind a bit :)

Your quilt is fantastic! And where in the world did you get all of those 9 patches in your bucket? So many more possibilities.

I too like your striped sashing; it just sets everything off perfectly. I hope you will show your progress from time to time on Jack's Chain. That one really fascinates me! ---"Love"

Hurray for using up the Stash. I find I get far more creative when I try really hard to use what I have. I think the striped sashing was a brilliant choice. I really like this one!

Another 9 Patch wonder! The striped sashing was perfect, glad you managed to make your piece of fabric stretch to complete all the sashing. So only another huge box of 9 patches to use up.............. what will the next quilt look like, I wonder?
I think you should call the Zig zag one "Lightning Strikes".

suggestion for at least one of these quilt names... To The Nines!

Holy Cats! That stripy sashing is making me drool - so very very perfect! (My to-do list gets longer every time you show off your latest quilt, ya know. Now I'm going to have to live to be FOUR hundred instead of three hundred...)

Those clothesline photos are irresistible.
And the blocks on point are very attractive.
I agree, another 9 Patch wonder!

Stripy stashing is a brilliant idea - I want to try it now. Another amazing scrappy quilt.

Why, I recognize that block! Glad you were able to use the idea!