Cleaning Up the Red Crumbs 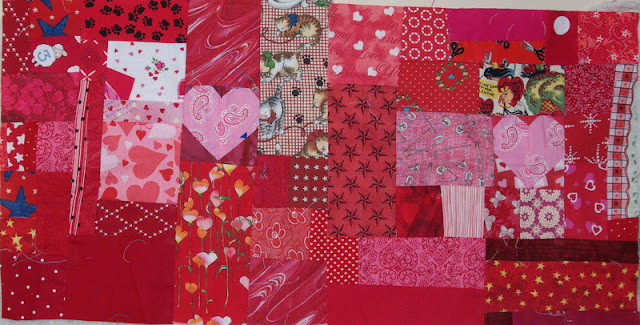 I work with my crumbs all month long. I have an old sewing machine set up with a couple of boxes of all colors of crumbs next to it.  That's my Crumb Machine.   I define crumbs as odd bits and pieces usually less than a six inch square.

I've never been very successful at ridding myself of these crumbs so this year I decided to sew them together each month by color - the Rainbow Scrap Challenge color of the month.   And then I'm saving up all the blocks to make donation quilts at the end of the year.  I can't wait to see how many donation quilts I will be able to make.

First of all, I usually pull the biggest regular shaped pieces out to make Slabs with heart centers. 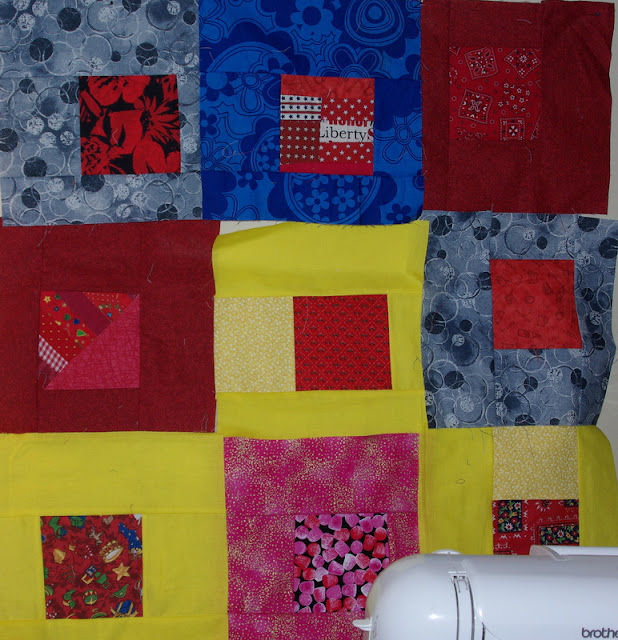 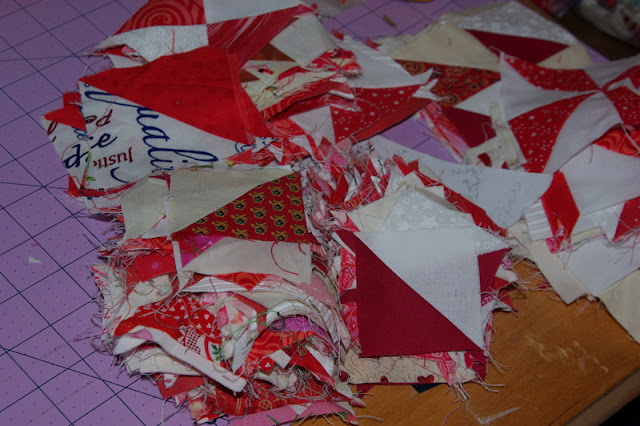 In the wonky HST box I found enough red/white HSTs in various sizes to make a quilt all by itself I think. I have an idea in mind but haven't gotten to it so set these aside to work on later. 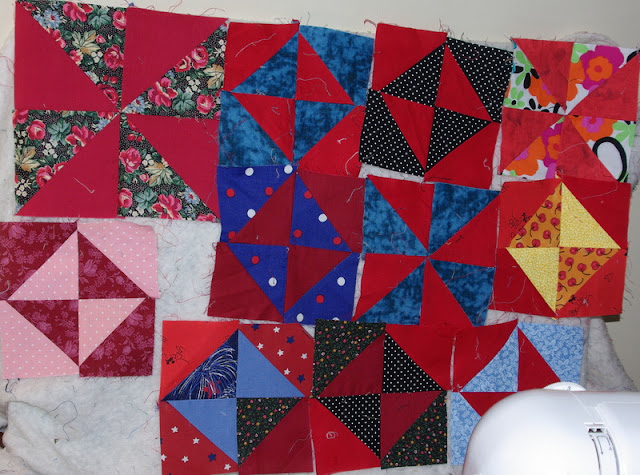 I sewed together the rest of the wonky HSTs that weren't red and white into a variety of blocks. The reason these are wonky is because I think most have been cut off blocks made with "flippy corners" and I don't cut them off leaving an accurate 1/4 inch...I just cut with scissors and eyeball it. Hey...what does it matter? The seam is already sewn.   I used to sew those flippy corner cuts together right away and throw them in a box but I've gotten sloppy over the years and now have a box of  flippy corners that need to be sewn into bonus HSTs as well.

And I chain piece and discovered that when you sew the half pieces together for Pinwheels or Broken Dishes they are the same - just depends on how you arrange them.  I think I meant about half of them to be Pinwheels but arranged them as Broken Dishes. That's how I know. 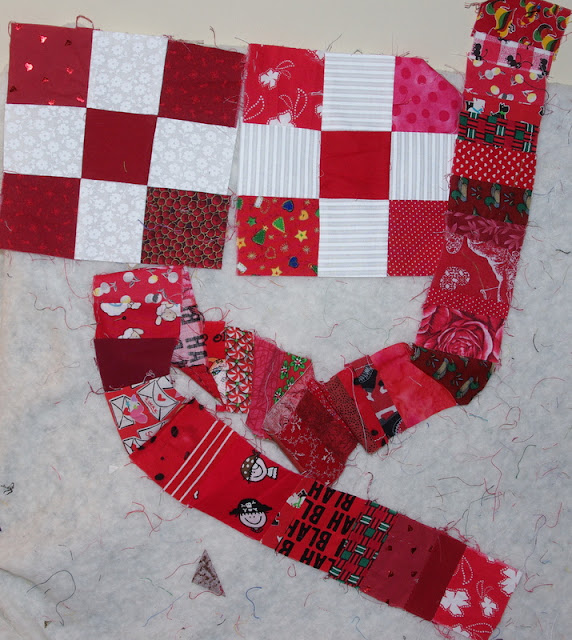 This year I've also been making strips from the various sized scraps as I use them...for instance when I work from the 2.5 inch scraps and a piece ends up less than a 2 inch square I set it aside for a strip. Until this year I did not do that so those bits are in the crumb boxes.  Anyway...I dug out those pieces and made a strip and a couple of nine patches for the orphan box (orphanage). 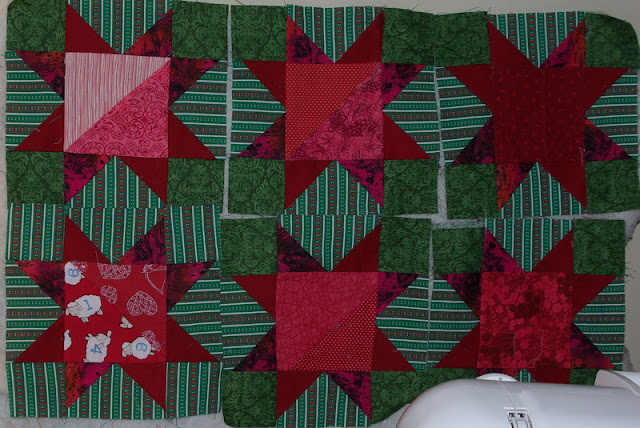 I found a few pieces that were 4.5 inches that were just right for star centers. I've been adding a background in complementary colors. 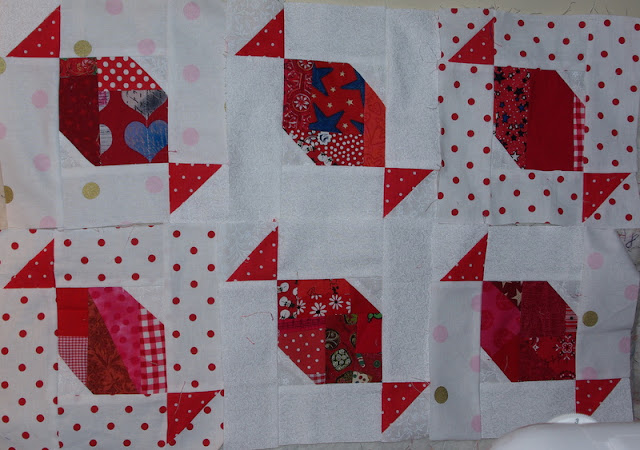 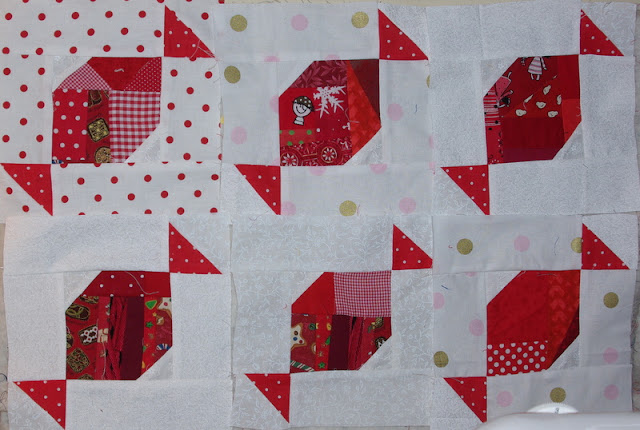 For the Stars, Candies and Fish I usually sew crumbs together into several long strips trying to keep them about 4.5 inches wide.  I later then cut those into 4.5 inch squares. I was mindlessly chain piecing the blocks and was almost finished when I noticed I had left off those "flippy corners".  Well, I could have just left them as square candies but they just didn't look right so to the seam ripper I went.  This batch of candy ended up to be more work than expected! 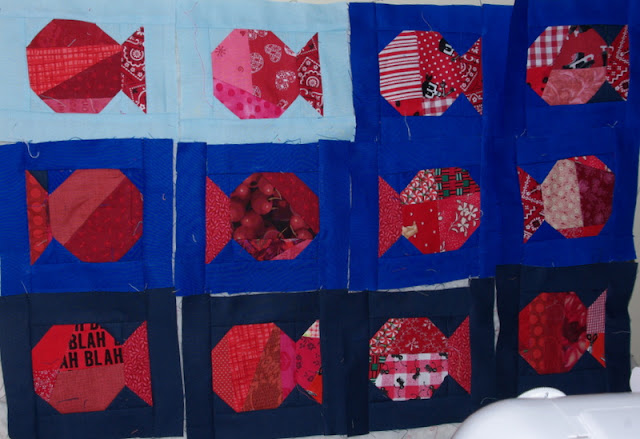 I'd like to apply for a job at Cathy's Confectionary Company please!

What a fun variety of ways to use up scraps!! I will need to re-read this and figure out how to apply it to my own stash as I aim to use up lots more of my scraps. (My little RSC project definitely is not doing the trick this year.) I especially like how your crumb blocks are tied together with the little hearts in them.

Great use of all your scraps Cathy--you are so inventive--I love those chocolate centers--yummy!! I still have a HUGE bag of mostly strips to sort--but I am working on it...I grab a handful and pull out colors I need and then push the rest back in--I am no where near as color-organized as you are...
I need to get my self in gear and do that--thanks for sharing your myriad pieces in the works--lovely job!1 Hugs, Julierose

You have so many great crumb ideas, Cathy! I like the idea of sewing similar size pieces into long strips 4.5 inches wide and then cutting them into squares to use in other blocks. I'll have to remember that!

Wow! What a fabulous collection.

You should really write a book about sewing with scraps. You have so many wonderful ideas and cheeky cute descriptions. I expect that next year we’ll see more scrap candy companies springing up, as well as fish hatcheries, etc. xo

Love the fish!! I might have to make some.

I agree with all the bloggers above. I love seeing your candy and fish every month. Thanks for the hint about the 4 1/2" wide strip of scraps and then re-cutting! Brilliant! As soon as my DS's 50th birthday quilt is bound and my retreat challenge is complete, I'm on that!

Wow!! You apparently had a LOT of RED scraps!!! Nice work.

NICE work!!! Those are all so fun and happy blocks - they will make great quilts!

Good heavens, I'm speechless! Can't believe how much you achieved....... it would take me weeks. Love all your blocks and look forward to seeing the finished Quilts.

As usual, your productivity is amazing! I love seeing the many ways you use your scraps and crumbs. So much inspiration!

I have a crumb/ string sewing machine too, but I have certainly neglected it. I love all your projects

Oh those candy pieces look so yummy! I need to practice a bit more on my new treadle so I can sew up a box of crumbs that have added up lately.

So fun to visit and get so many great crumb ideas.... now I want chocolate though!

I love your red creations and the way you put it all together. So fun!

I don't quite understand how when you put together all these various pieces and mismatched hsts and all the other bits, it comes out wonderful, but when I try it, it just looks bizarre. I know that part of my problem is being too OCD and wanted stuff to match and fit together. I'm working on it and using you as a role model, but, boy, it's hard work sometimes. I love all your crumbs, even though in my world a 5" scrap wouldn't be considered a crumb.
Pat

Great progress. I always have trouble understanding how you can have any scraps left at all with the rate at which you use them up. Looking good!

I don't know how you find the time for all you do even if you are retired. You have a very interesting assortment of blocks. I agree with what scraphappy said. It's amazing that your scraps keep multiplying even though you seem to be sewing at breakneck speed.

Thanks for sharing the details of your process! I find that sort of thing endlessly fascinating. I think I need to stitch up my leftover flippy triangles immediately, too. They get sorta out of control really quickly otherwise.