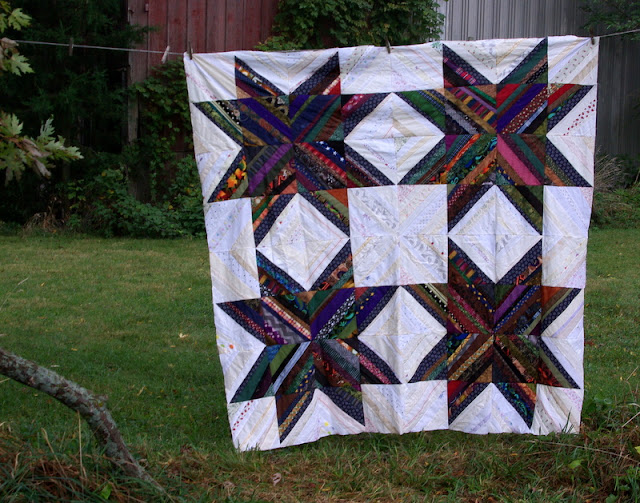 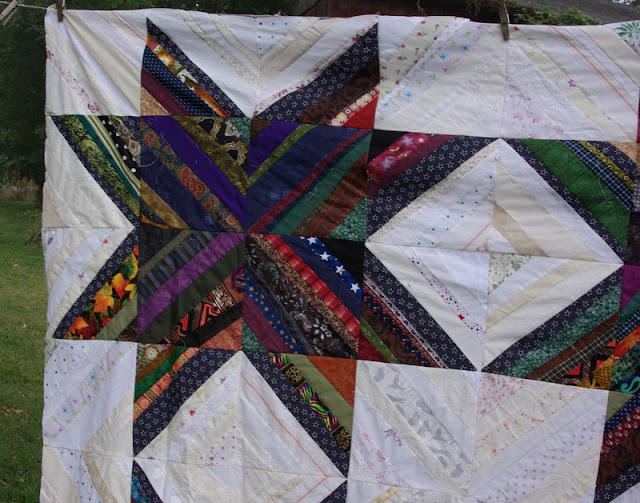 The other day when I blogged about cleaning up after a September quilting marathon I mentioned that Stringing Stars was one of the quilts I planned to make from my strings.  I was actually going to wait until 2022 to work with my strings and crumbs. After I looked at my giant box of colored strings I decided I should work on them as soon as possible or I might end up strangled with strings. 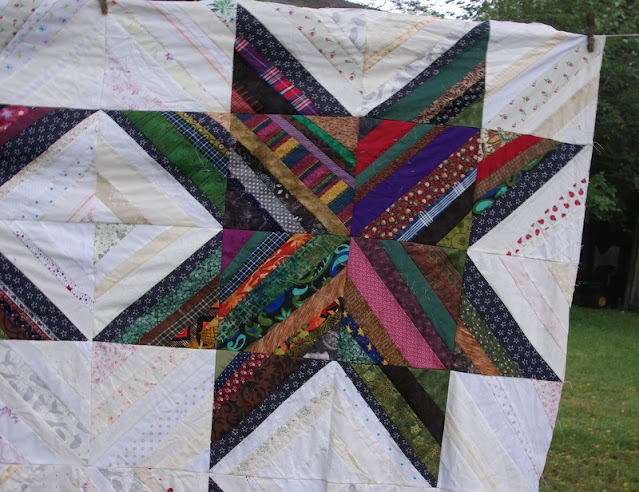 I have a couple of other string quilts in mind but started with this one because it uses some of the longer strings and a few others use shorter strings.  So from my giant box of strings I pulled out all of the darks. I only included a few black strings because I wanted to save those to mix in with the brights later on.  After I had the dark strings sorted then I pulled out all of the novelties from the darks to use in a different quilt for kids later on. 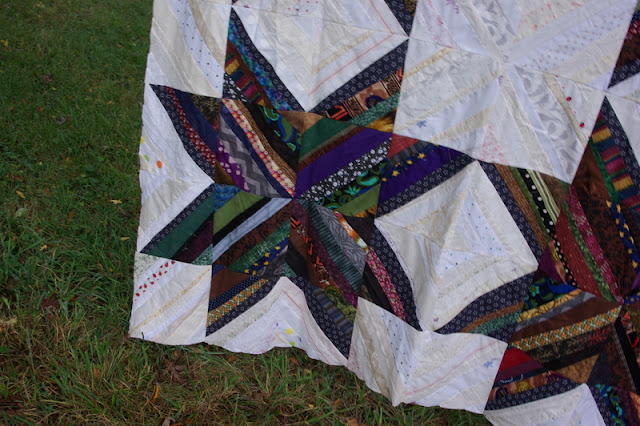 I still get a little hometown newspaper delivered because I use it in gardening  and use it when I need larger paper foundations for quilting. I cut 9 inch newspaper squares for foundations. I don't mind pulling the papers off the back. I throw those newspaper pieces in the compost pile when I've finished tearing them off. 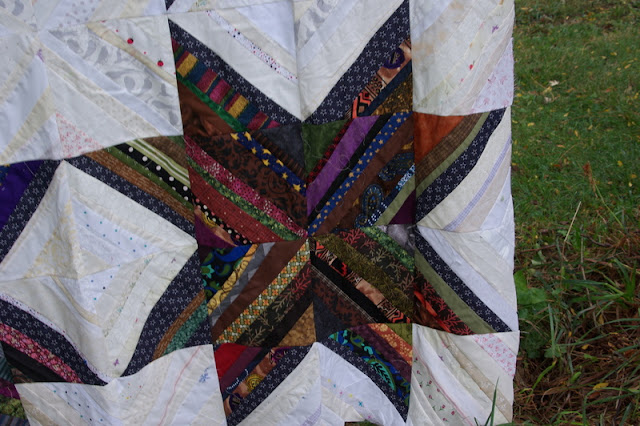 Next time I make half dark/half light string blocks I need to remember to line them up a little better on the diagonal when I sew them. I guess that's where  little glue might come in handy. 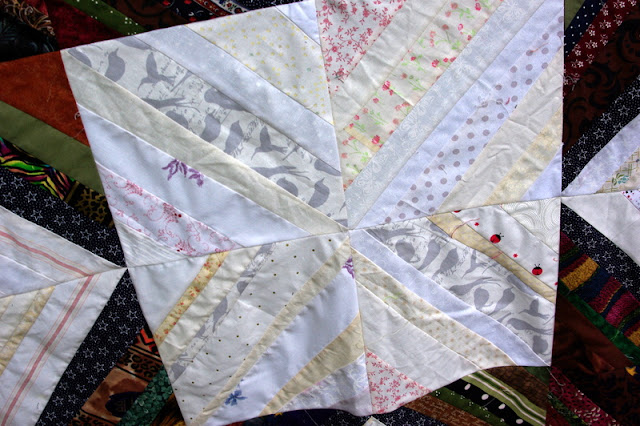 I really had to scrape the barrel to find enough neutral strings. 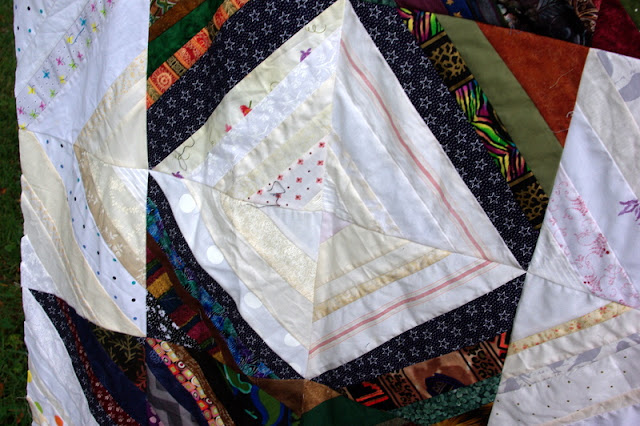 I do have some other light colored strings I was tempted to use but decided to try to keep to mostly white and cream. 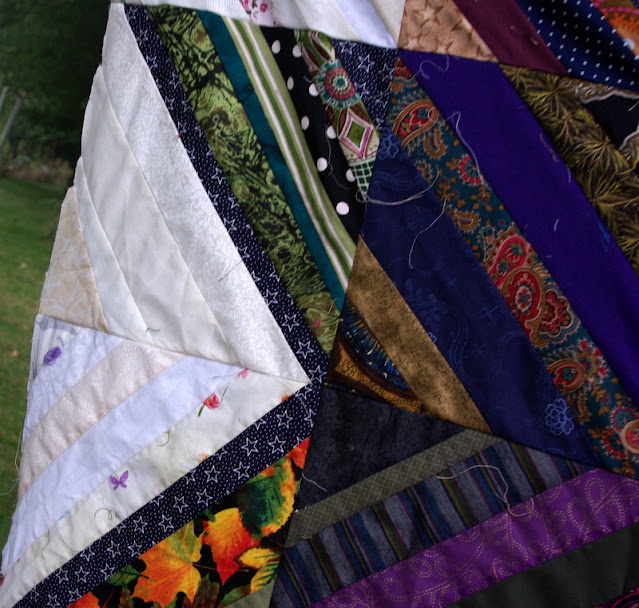 Oh, and I had a bunch of long strings of that dark star fabric that came from trimming a large quilt back. I had enough strings of it in various widths to use in each of the star points so I guess that was meant to be.
I'll be starting on a couple more string quilts soon. Before I do I will blog about that giant box of strings and plans for it.
Finished or Not Finished Friday at Alycia Quilts
Peacock Party at Wendy's Quilts and More
Posted by Cathy at Friday, October 08, 2021

Yay for another awesome string top! I love the very dark with the light strings. I tried some half and half blocks this year when plugging along with the RSC, but didn’t care for a couple of the colors. But the blocks always find a home, don’t they? I’m looking forward to seeing your upcoming string projects as I’ve got several in my future as well. I’ve currently got 378 blocks at 6.5” waiting to be sewn together…. And plans to sew lime green strings next week.

Great string flimsy. Love the stark contrast between the stars and the neutral background. Looking forward to seeing that big box of strings and all your plans for them. How many other flimsies do you think you will make from the strings stash?

Beautiful String Stars! That went up in a hurry.
Thanks for the inspiration and tip on using newspaper for foundations.

Way to use up some of your skinniest scraps, Cathy!!

Your string stars look amazing, such a lot of stitching done in this project!

You're an enabler you know! This is just wonderful, and now I'm itching to make another string quilt! Have a great weekend!

I really like string quilts and yours is great

Ohh this is so gorgeous!!! all the yummy and the scrappy goodness!!!

I love those string stars too! I just finished up one and have started
saving up strings and making string blocks for the next few!!
Stay safe and sew on !

Strangled in String Stars would be a good name for this one. Don't forget if you have a good neutral but just too much dark in it, turn the fabric over to see if it is lighter then. Love it!