Report From A Fly On The Wall 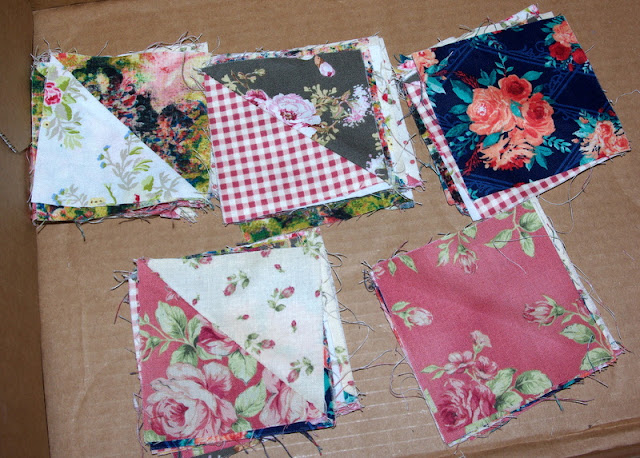 After I reported on my string quilts to the Stashbusters Group  someone said they wished they could be a fly on the wall and someone asked how many hours in a day I usually spend sewing.
Well, on average I probably spend about four hours a day in my sewing space sorting, cutting, sewing and ironing. And today there was a fly on the wall that will report on what I actually did in four hours in my sewing room this morning after my coffee, yogurt and toasted homemade sourdough bread.
I made some HSTs in July for a quilt called Mystica. The top consists of 4 panels of 14 rows and columns of HSTs and squares. I have one panel sewn (1X) and just started working on another panel yesterday and sewed together pieces in rows 1-4. 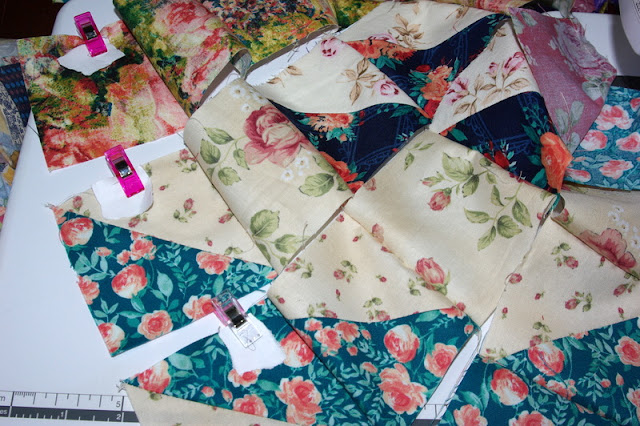 . Today I worked on sewing together rows 5-9 for panel 2X. 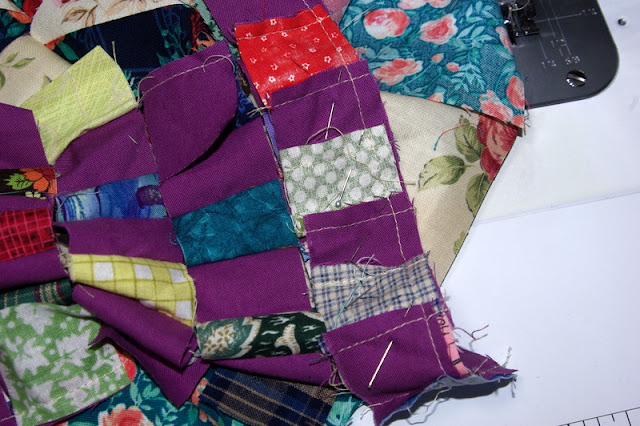 I was going to sew together webbed rows of  PSP20 (Postage Stamp Pandemic 64 patches) for leader/enders at the end of each column but that seemed too slow and like too much pinning. 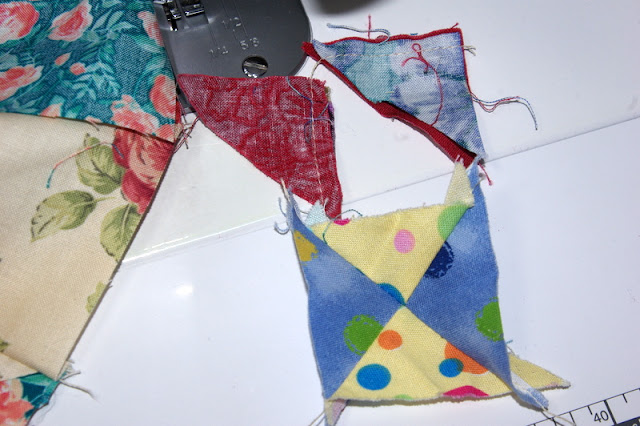 I decided instead to use waste triangles to make wonky HSTs instead. I blogged about these and the quilt I want to make inspired by a vintage quilt back in January. 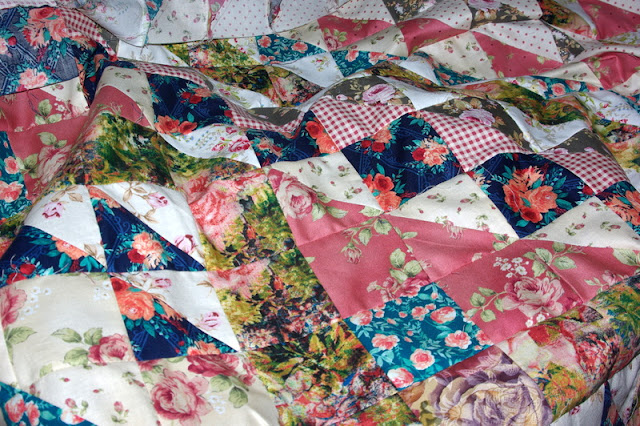 Panel 1X. I'm working on making another panel like this one which I've named 2X. 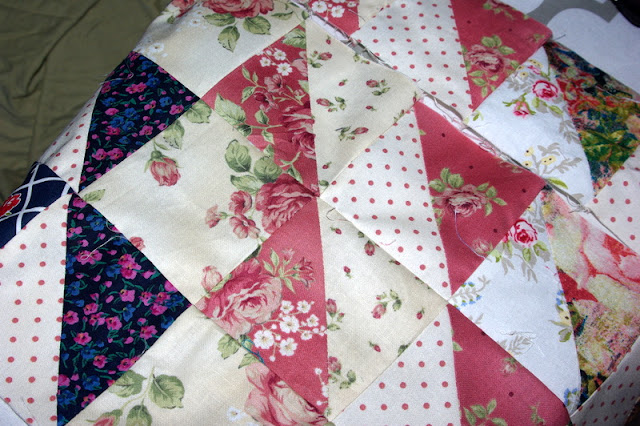 So anyway, after I webbed together rows 5-9 of panel 2X I sewed together the rows 1-4 I webbed yesterday. Then pressed. And then I was tired of Mystica so moved on to something else. 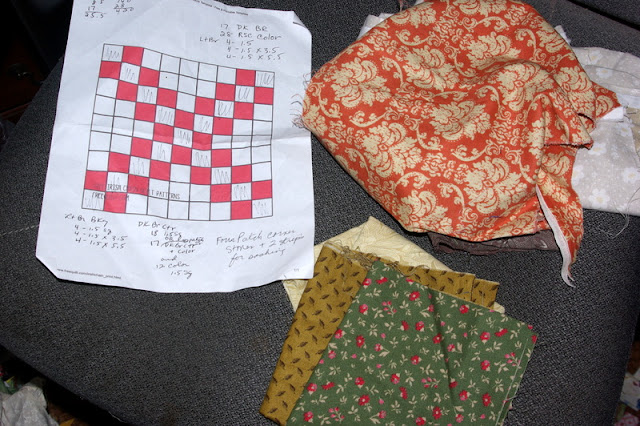 Double Irish Chain is one of my Rainbow Scrap Challenge (RSC) projects. I have 52 out of the desired 63 blocks made and I want to have all 63 blocks finished by year end. So I decided to work on those. I picked out fabric yesterday for a couple of blocks so cut the pieces for two Double Irish Chain blocks from those fabrics. Then I put the fabrics away where they belong. 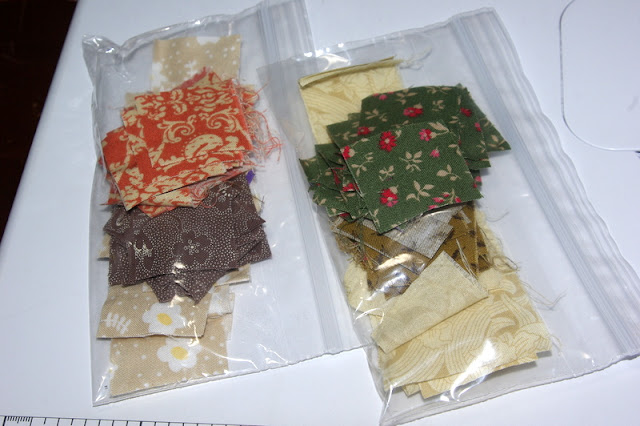 Then I started piecing the blocks. A lot of blocks can be chain pieced but not these. I make them one at a time and work from the inside out. 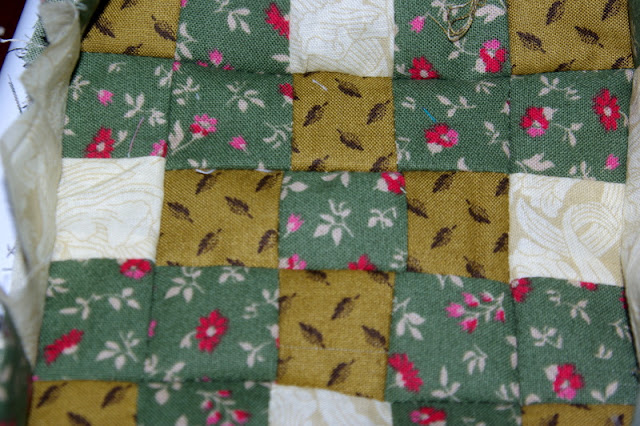 I started with the green one and got so far along and was missing a green 1.5 inch square. I searched around for it and then noticed I put the center together incorrectly. The little center nine patch should have brown corners and not green corners. Oops! I haven't had that happen before. Well, I set that one aside and will take the seam ripper to it tonight while watching TV with hubby.
I did continue on and make the second Double Irish Chain with the orange pieces. 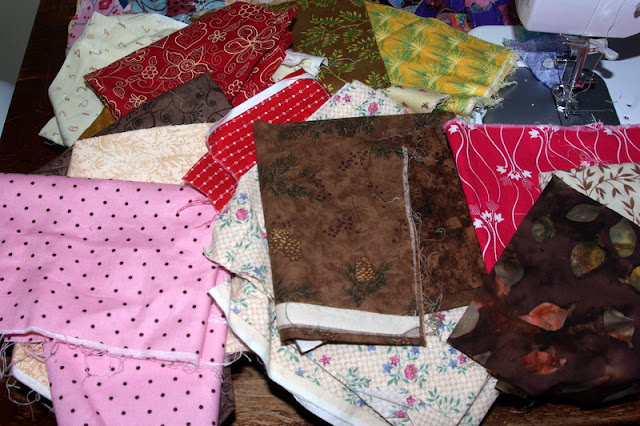 Then I dug through scraps for fabric combinations for some more Double Irish Chain blocks. I may or may not cut and sew some tomorrow. But if I do feel like it I have some fabric combos ready.
Then at this point I took a break - went upstairs, went to bathroom, got a glass of iced tea, chatted a bit with hubby and went back downstairs. 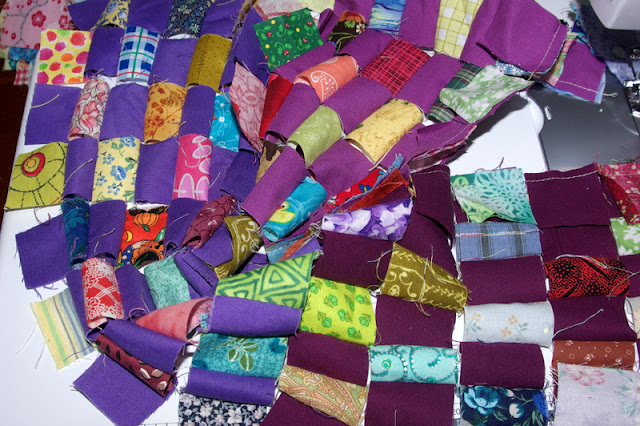 Then I sewed together the rows of three PSP20 blocks I webbed together yesterday. 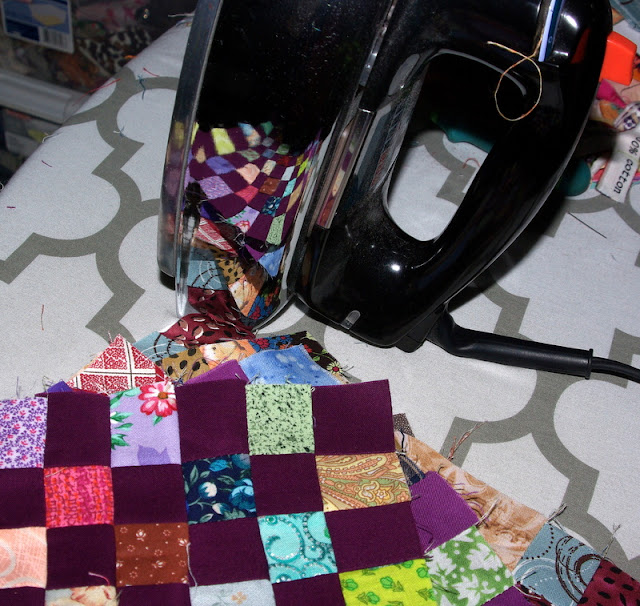 Then after I finished the three PSP20 blocks I ironed them. I also ironed the Double Irish Chain I just made and the two I made yesterday. I have more blocks in the ironing pile but I only ironed these because I want to blog about these two RSC projects tomorrow.   If you are interested my iron is a cheap Walmart Black and Decker. I don't use steam. If I want steam I spray the fabric with a spray bottle of water.
Then I took photos of the PSP20 and Double Irish Chain blocks for tomorrow's blog post. I don't have a design wall. I prop an old cutting mat covered with a piece of batting against the wall and put blocks on it for photos. 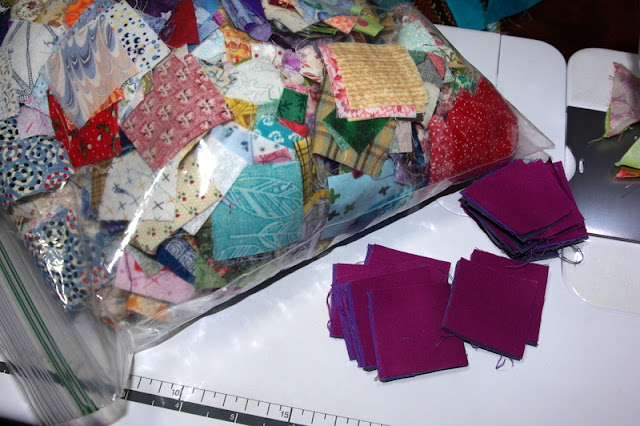 After that I cut solids for three more PSP20 64 patch blocks. I was getting low on different solids but recently found a few different purple solids in with some pansy fabric scraps so have been using those. I have a gallon baggie of postage stamps (1.5 inch squares). 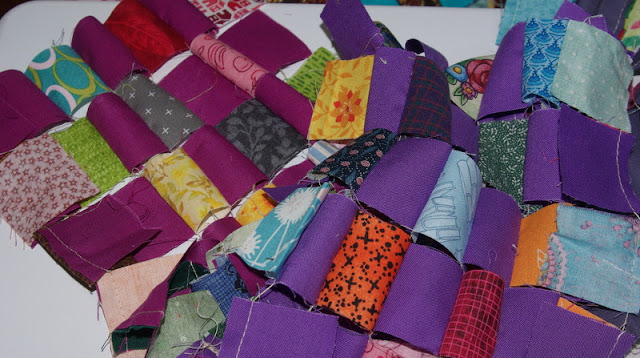 Then I webbed together pieces for 8 rows of 8 for three blocks.
Then I was tired of postage stamps. 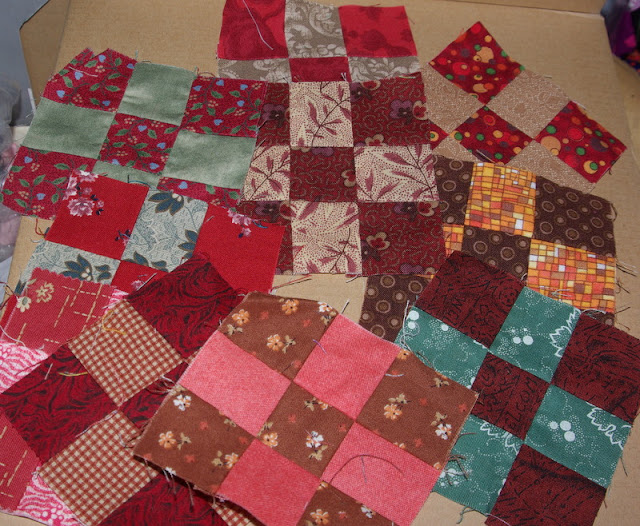 I've been working on Path and Stiles blocks and have been using 3 inch nine patches for the centers. For several years I used to participate in a quarterly 3 inch 9 patch swap and even though I have made several quilts that used them I still have a bin of them. For the Path and Stiles blocks I am using nine patches made with two colors and then trying to match up scraps to the blocks to make the blocks.
I picked out a few nine patches in two colors that had reds in them. 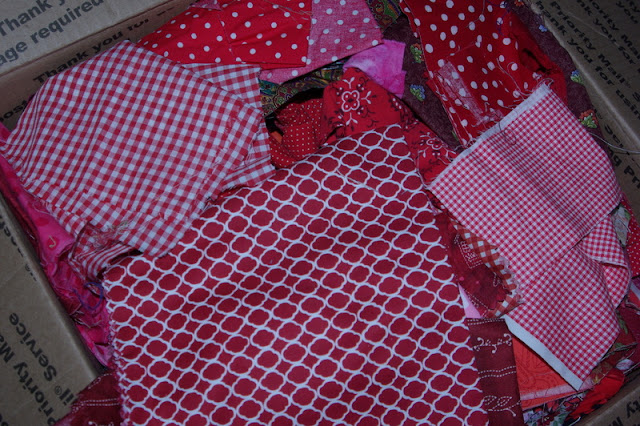 Then I dug through my red scrap chunks for some possible fabrics to match the colors in the little nine patches. 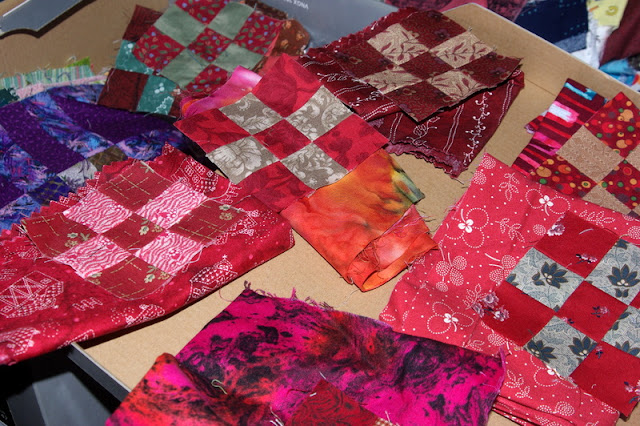 After I found some red scraps to match (I only need a 3.5 inch width scrap) I dug through scraps of other colors for the second fabric match. So when I feel like working on Path and Stiles blocks my fabrics are ready.
So that was about four hours today in the sewing room. Doesn't seem like I did a lot but every little bit adds up!
Then hubby called me for lunch- last night's leftover chicken vegetable soup made with garden veggies (onions, green beans, carrots, tomatoes and potatoes) and some homemade crackers.
Posted by Cathy at Friday, October 29, 2021

What an amazing amount of sewing, planning and sorting you squeezed into four hours. I still don’t know how you keep track of all these projects. I seem to have accomplished very little in comparison. 😂

I love to read about your organization, planning and sewing endeavors...it is very inspiring! But I am wondering what your husband is doing while you are busily engaged in the sewing room? He doesn't seem a bit jealous of the time spent there! :)

You spent four hours sewing and you didn't think it seemed like you did a lot? That's more than I get in a week. Lots fun going on there.
pay

I swear you are the Queen of Squirrels! I just downloaded Mystica...

Please tell the fly thank you for a peek into your time in the studio.

Thanks for the fly's eye view of your day, Cathy!! Now, please pass one of those homemade crackers this way, would you? YUM!!!

I for one, think you accomplished A LOT in your sewing session today.

It looks as though you accomplished quite a bit to me. And you are moving several projects forward which is a plus. Thanks for the peek into your sewing day.

I just checked out the quilt Mystica and I will be interested to see your version.