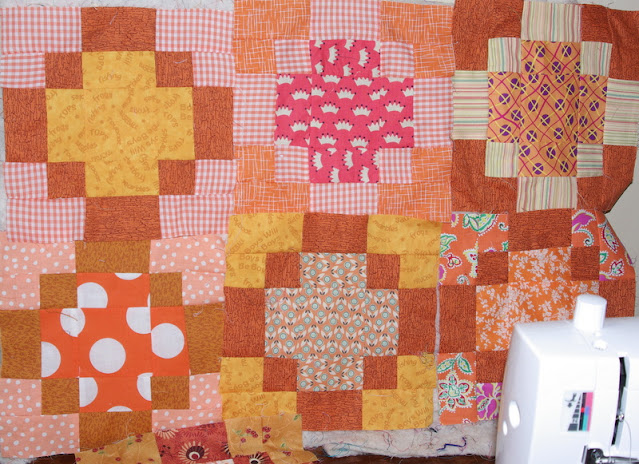 I didn't get my Rainbow Scrap Challenge (RSC) orange blocks made last month so I'm working on them this month. This month's RSC color is lime or light green but I used all colors of green scraps back when the RSC color was dark green so don't need to make any green blocks.
This year I've been mostly working with scrap chunks. I've been cutting off some 3.5 inch width pieces and some 2 inch pieces to make blocks that use both of those size scraps.
Antique Tiles
9 inch finished blocks
I currently have 56 blocks and my target is 63. I'm going to try to get 7 more blocks made within the next few weeks and think I will use brown scraps to make them. 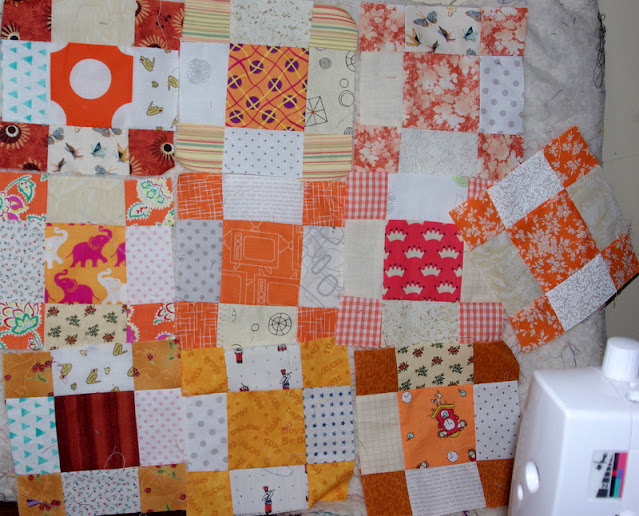 These are also made of 3.5 and 2 inch pieces.
Uneven Nine Patch
Six inch finished blocks.
I currently have 76 blocks and my target is 130. This will continue as an RSC project next year. 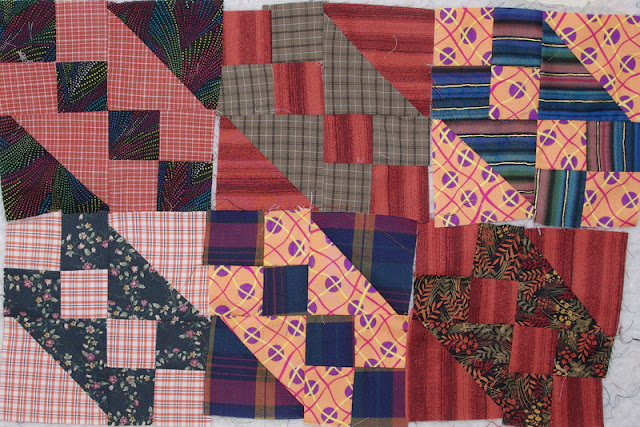 This is another block with 3.5 and 2 inch pieces. I've been making them with scraps in the RSC color of the month and old shirts or dark scraps.
Buckeye Beauty
Six inch finished blocks.
I have 84 out of a target of 130 so this block will continue into next year. And I have a few shirts I still need to cut up to add to the mix.

This is yet another block that is made with 3.5 and 2 inch pieces.
X+
7.5 inch finished blocks.
I have 46 out of a target of 99 so this is another block that will continue into next year.  I'm thinking that I will make the rest of the blocks in the RSC color of the month plus it's color complement. 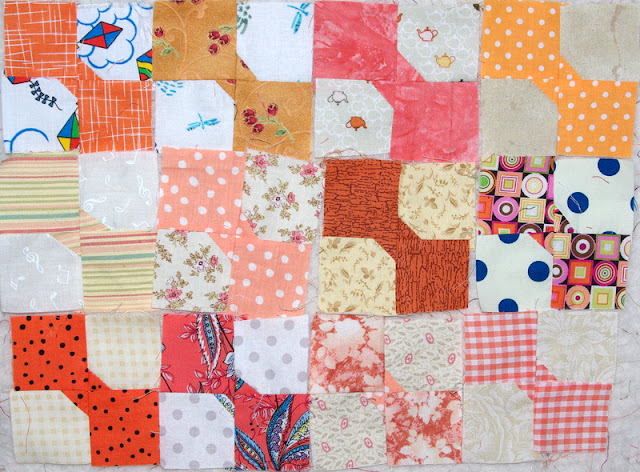 These little 3 inch finished Bow Ties are a new RSC project made with 2 inch scraps. 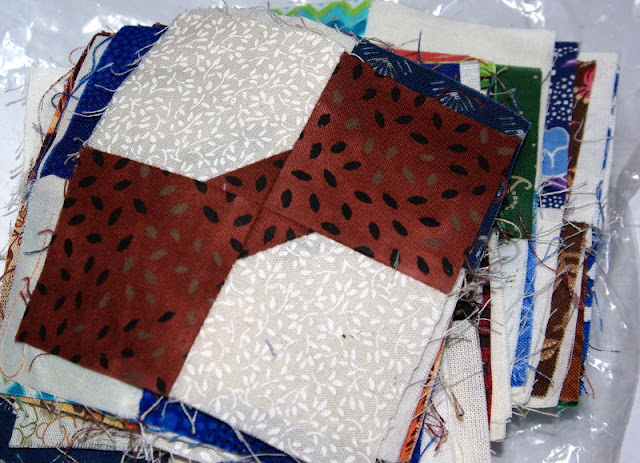 In August I worked with my orphan blocks and found a little baggie with 40 little Bow Ties. I adopted those orphans and now they are happy to be a new RSC project. 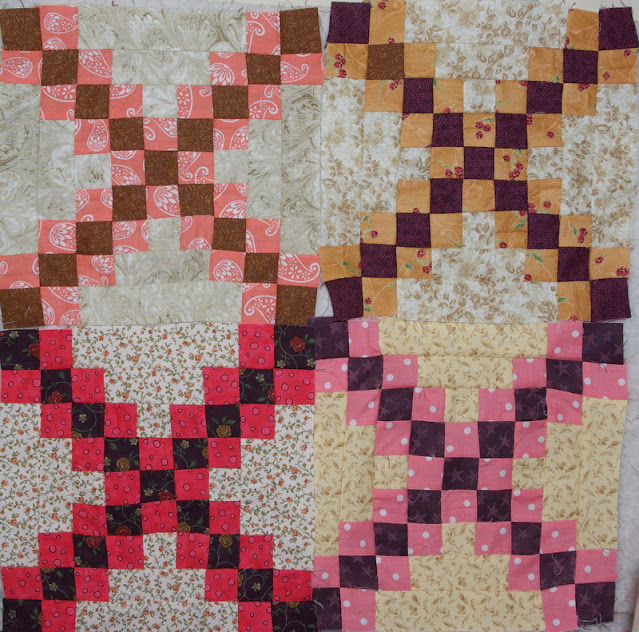 Double Irish Chain
These are made with 1.5 inch scraps in the RSC color of the month plus a light brown or cream background and a dark brown chain.
9 inch finished.
I have 52 out of a target of 63 blocks. I hope to make 11 more blocks by year end. There will be a scrappy cream/lt brown  sashing with cornerstones. 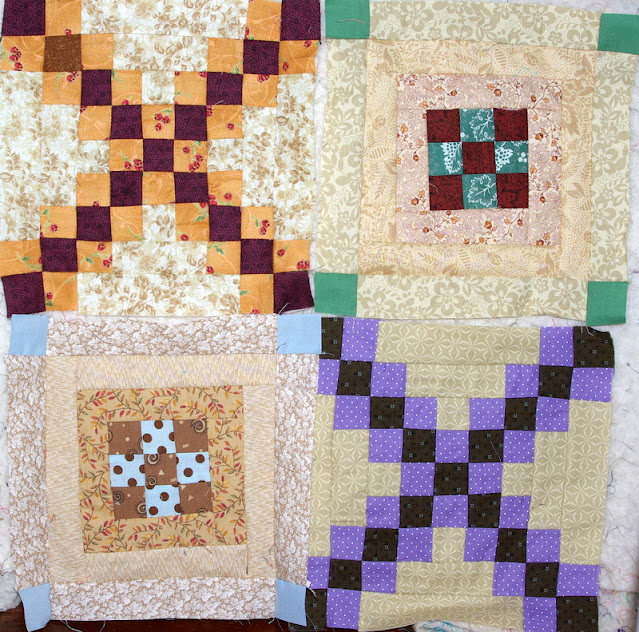 I played around a little bit with an alternate block. I like the look of a quilt at Quilter's Cache called Soldier's Walk but I don't think I like that idea for this quilt. Instead I'm thinking I have a lot of small patriotic print scraps that would be put to good use in Soldier's Walk.  So I guess those two alternate blocks I made are now orphans.
RSC ScrapHappy Saturday
Posted by Cathy at Saturday, October 09, 2021

I agree the Soldier Walk does not work with your blocks, like it did with Quilter's Cache. But,the are really pretty and calming. I could see them as an alternative to another block that has a diagonal pattern. Violet Withey

SEW busy catching up on ORANGE, Cathy!! You really have a good variety of print scraps. Happy sewing!

You've almost got some quilts ready to put together! For the alternate blocks for your double chain, how about simple friendship stars? they would look like they were floating in between the chains. Sawtooth stars could also work. Good luck getting to the finish lines!

I'm still working with orange here and there too. You have so many fun projects happening! LOVE the bright that the orange brings to each one.

You always have some great ideas, and the Soldier’s Walk block is another one. I love all your blocks this week!

More ideas for blocks, all great! I agree that the chain blocks need to be by themselves. And your Orphan blocks stash has a new addition.

I love seeing the variety of blocks you make with your scraps! They always make great quilts. I've tried alternate block ideas with some of mine that don't look quite right either. Back to the drawing board!

My goodness, so many blocks, it's hard to keep up with you! I love the bow ties, always looks so effective.

You have more than a good start on all of these. Way to go.

I too have some orange playing to do as well. Looking great.

What inspiration you have there for us! I personally love the Buck Eye beauty!