It's a Finish! HISSS 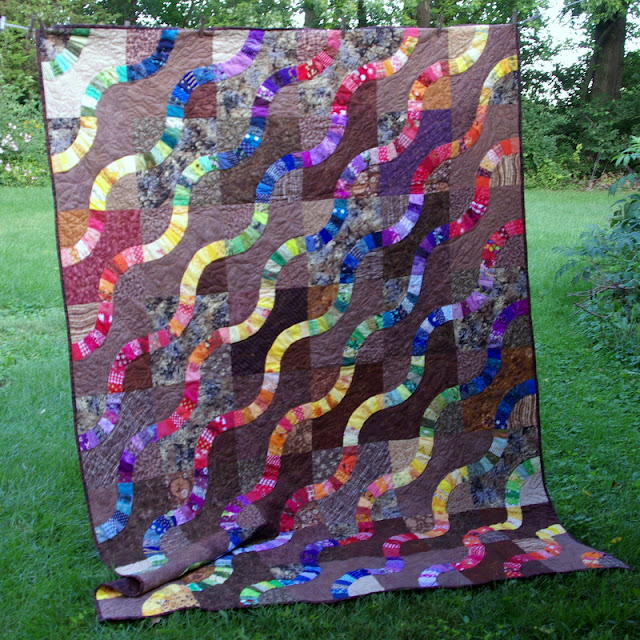 I've only had small snippets of time to sew the last several weeks so I just kept a quilt under the needle and did some free motion quilting when I could sneak away to the sewing room for a few minutes.  A few minutes here and there add up because I have several quilt finishes to share next week after all are bound and washed.

My husband accidentally changed the settings on my Pentax camera. I've had them set perfectly for my picture taking for so long that I could not remember what the settings were so I've been playing around trying to make things right again, darn it.  So excuse the pics that might seem a little blurry, dark or too light. 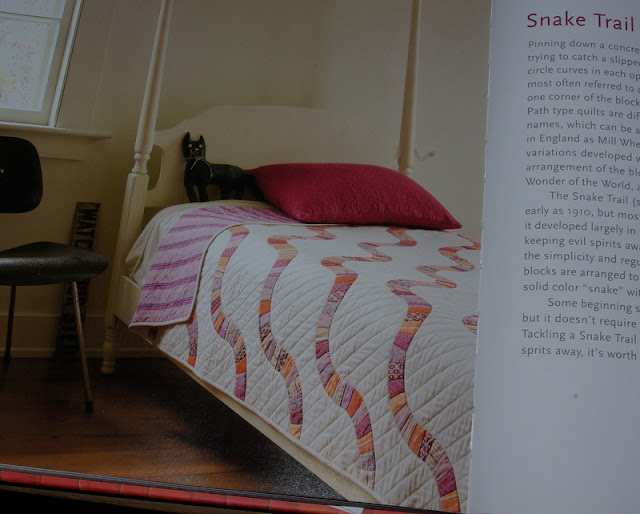 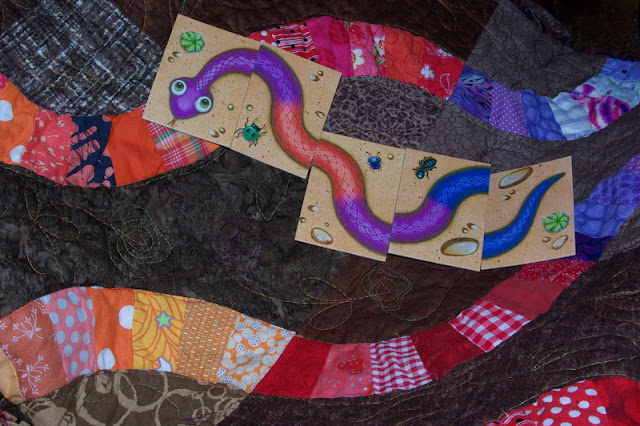 I call my quilt HISSS. That's the name of color matching game that used to be one of my grandson's favorite games to play when he was younger. (He's now a grown up ten year old). 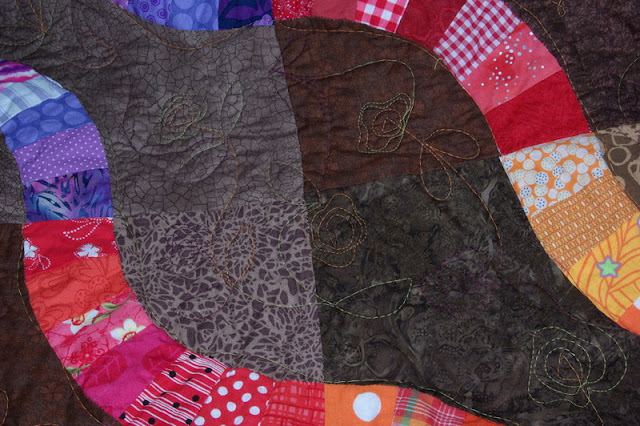 I started making the blocks way back in 2014 as a Rainbow Scrap Challenge project to use 2.5 inch scraps for the snakes and a variety of brown pieces for the background that looked like dirt. 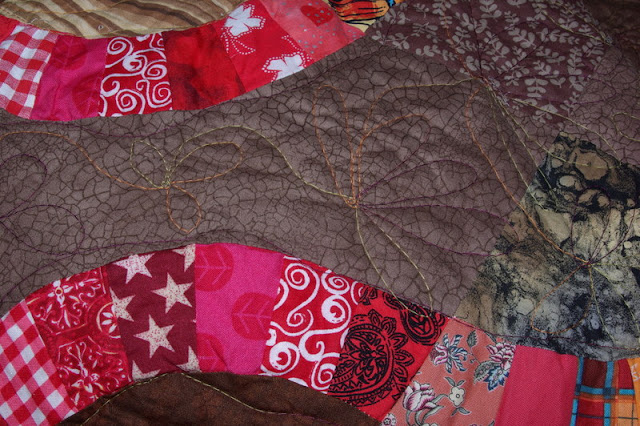 I quilted it on my DSM with a variegated thread on top and a dark brown thread in the bobbin.  I didn't quilt in the snakes so they would stand out. I did a squiggly line either side of the snake since I'm not good at stitching in the ditch. 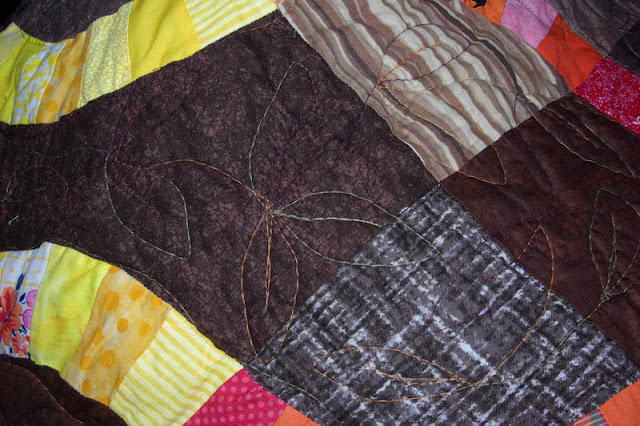 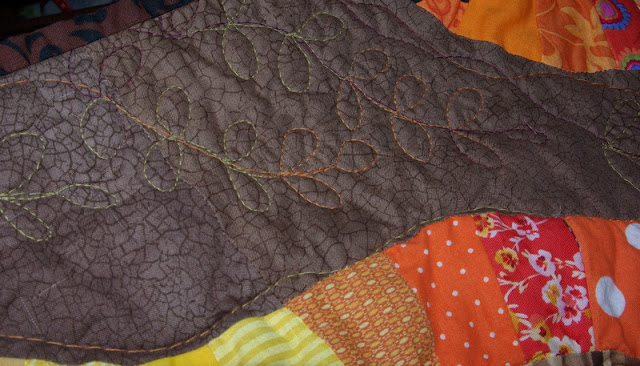 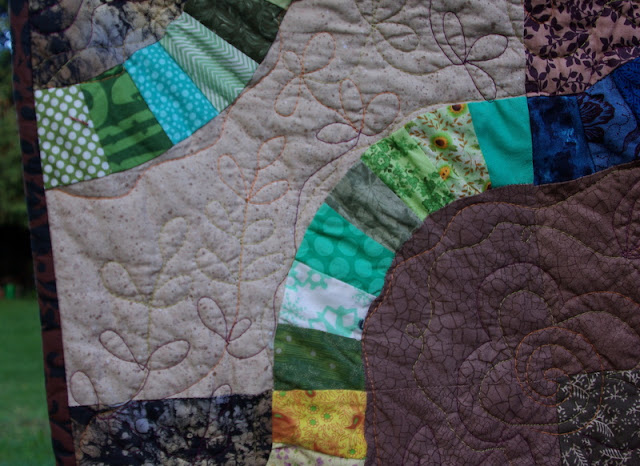 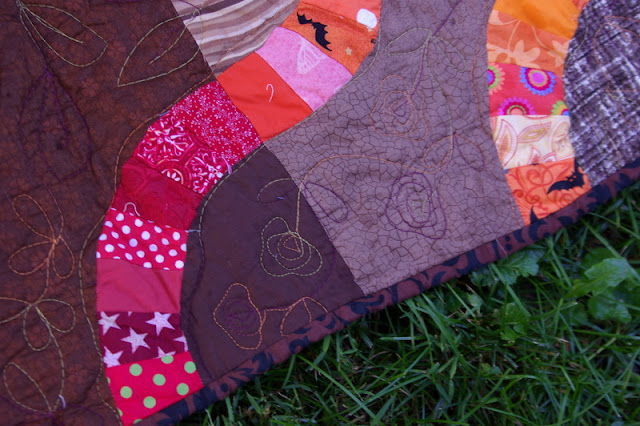 The binding is the same as... 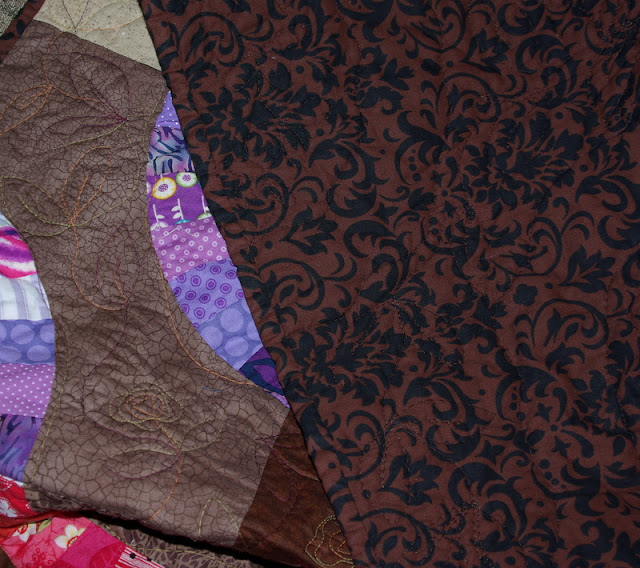 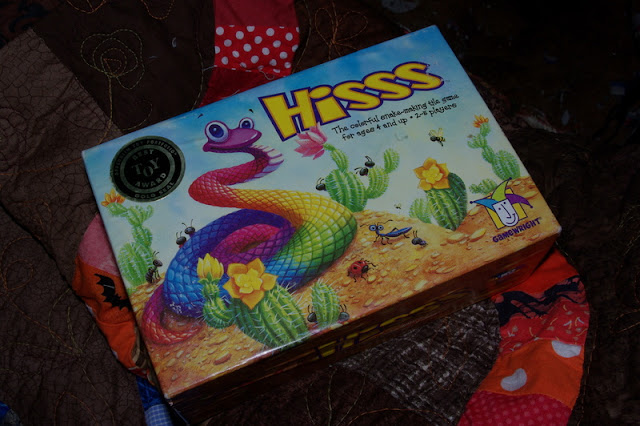 The game and the quilt and some pictures of my grandson Jacob playing the game (when I find them) will go into the hope chest. I'll give it to Jacob at some later date when he sets up his own household.

This was my goal #4
for
Q3 Finish-Along

Finished or Not Finished Friday at Alycia Quilts
Posted by Cathy at Friday, September 13, 2019

I love it! The name is very appropriate, and your quilting looks great too! ---"Love"

Cathy, HISSS is just awesome! I bet your grandson will get a big kick out of receiving this one someday. Such a great quilt to build on a sweet memory!

This is so beautiful! :D

So fun! Jacob will love that quilt along with his favorite childhood game. I'm betting that it will be passed on to future generations!

Hisss! The quilting is just perfect with all those leaves and flowers growing out of the dirt!

This quilt is one of my favorites. I wish I liked sewing curves more or I would try and make one of my own.

Great quilt and I love the quilting. I can’t quilt in the ditch either so usually quilt a sewing machine foot width either side of a row or column join. I wouldn’t know where to begin doodling freestyle flowers! Well done for another FINISH!

HISS is such an imaginative quilt! You must have had fun quilting in all those different motifs. Congratulations on a great finish!
Sandy at sewhigh.blogspot.com

What a fabulous quilt brimming with gorgeous colour and pattern and FUN! A most wonderful finish.

What a cool quilt. It will be treasured.
Pat

Hiss hiss hooray! What a terrific finish! I remember the flimsy and its even better fully quilted. But then again, aren't they all? I love all the little leaves and flowers in the dirt :)

Love your idea of a quilt... and a game.. and all those memories! Such a special gift!

Sounds like perfect quilt for your grandson. I like that your quilting makes a garden for the snakes to live in.

What a wonderful quilt! Such fond memories and it shows in in all the choices you made. Family always inspires the best quilts!

A beautiful quilt, and I love the story that goes with it!

I'm not ordinarily a snake person AT ALL. But yours is wonderful!

As always, you have managed to take an inspiration piece and turn it into something extra fabulous!

What a fun RSC quilt idea!
And with the photos and the game, it's a wonderful heirloom treasure for the next generation!

Hissss Turned out great!! so now you are going to have to hide the camera like we all hide our scissors!!

Perfect name and I love the quilting you did on it!

Love this so much! Fantastic layout and so much fun. Probably the only kind of snake I wouldn't run away from!