Out of the Depths of the Orphan Block Box: Bow Diddley 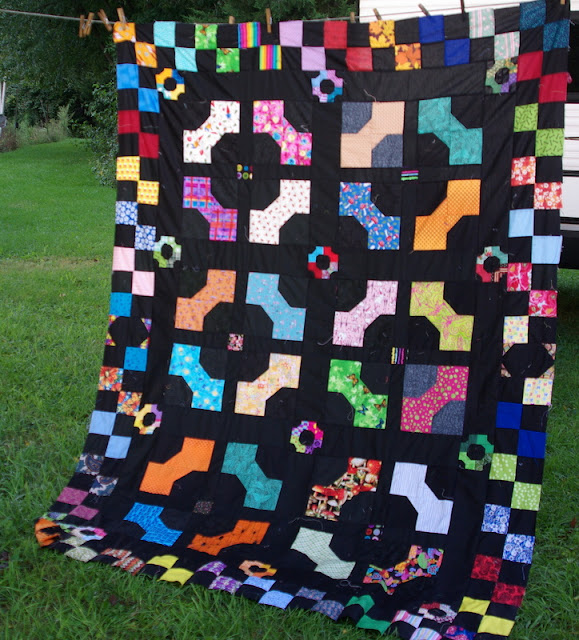 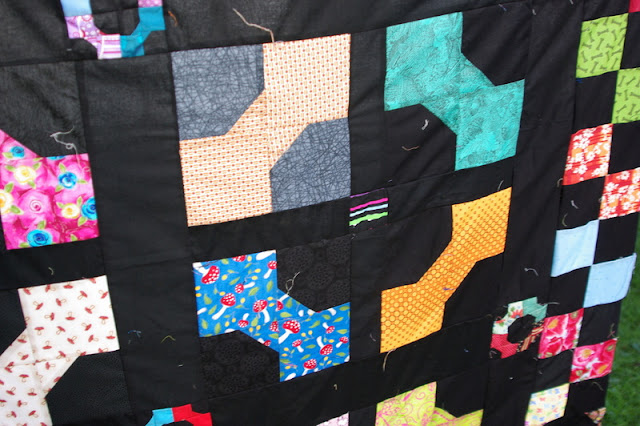 This month I pulled a pile of orphan blocks that have black backgrounds to see how many quilts I could make from the pile of buried treasure.

This quilt started with twenty-two eight inch Bow Tie blocks from an online swap from long, long ago.  I finished one donation quilt made from thirty-five of the swapped blocks back in July 2016. After that quilt I had 22 blocks left for the orphanage. The ones I put in the orphanage kind of had  woodland theme going on. 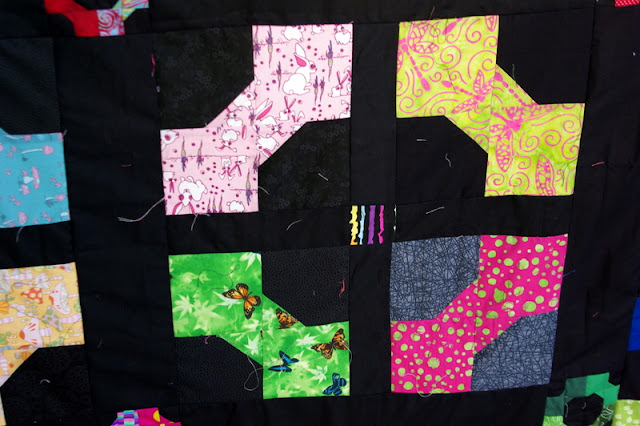 I decided I wanted a twin sized quilt so decided first to join sets of four blocks with 2.5 inch sashing and 2.5 inch cornerstones which made eighteen inch finished blocks.  To come out with an even number of blocks I had to make two more Bow Tie blocks so dug into the 4.5 inch scrap bin to look for some woodsy themed scraps. I made the lime green/pink dragonfly and green butterfly Bow Ties. 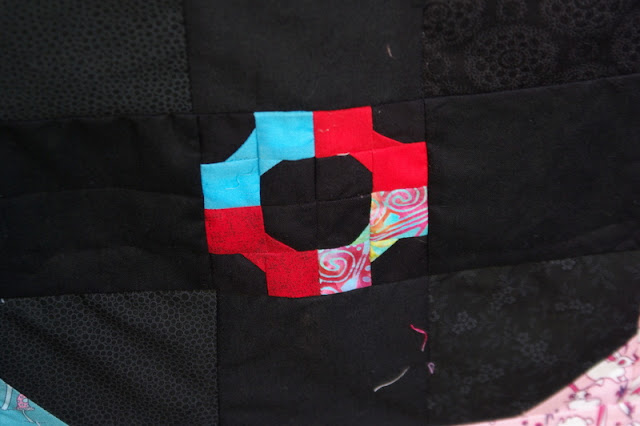 I decided a four inch sashing to join the blocks would make a quilt 48 x 70.  I don't know what possessed me to dig into my 1.5 inch scraps to make some little bow ties for cornerstones but strange things happen sometimes when you diddle around in the sewing room. No design wall here but that's what I imagined in my mind that the quilt needed.  (Yes, I just made it all up in my mind as I went along - no rehearsals or try outs or endless fiddling and rearranging on a design wall - just imagine and then do). 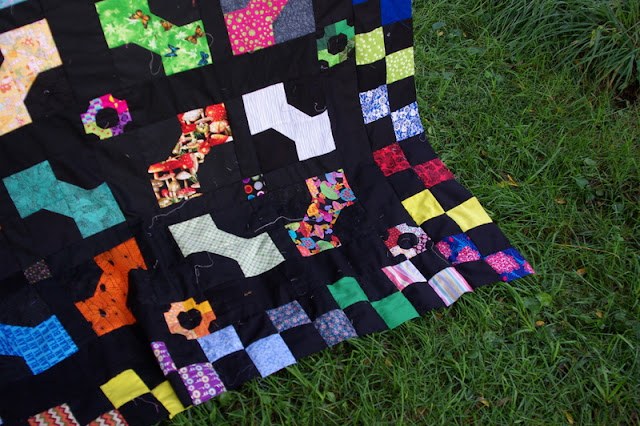 So after all blocks were joined with a four inch sashing and little bow tie cornerstones all around I had a quilt top that was 48 x 70 which was still short of a twin sized quilt. What to do? What to do?
A six inch border around would make for a quilt 60 x 82. Ok. That's close enough to twin sized for me....maybe a little small but it could also make a nice sized comfort or couch quilt. 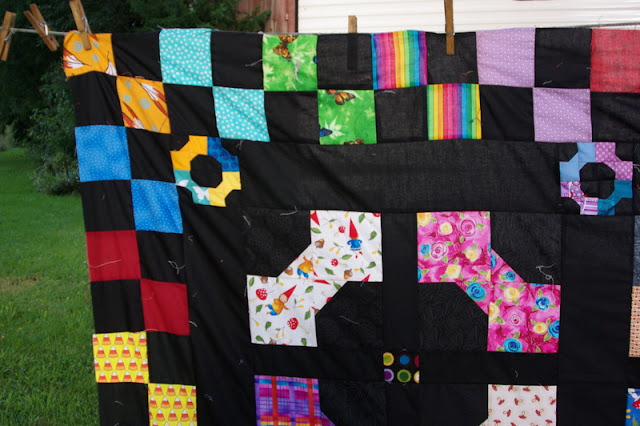 I don't have a lot of large pieces of yardage to make borders with all one fabric so that was not an option otherwise I probably would have went that route. I looked into my 3.5 inch scrap bin and saw a lot of brightly colored scraps and at first thought I would make six inch Bow Tie blocks for the border but then felt a wave of laziness surge over me. I really didn't want to make that many Bow Tie blocks because I don't really like sewing and trimming those flippy corners. Instead I just made Four Patch blocks from 3.5 inch square scraps. 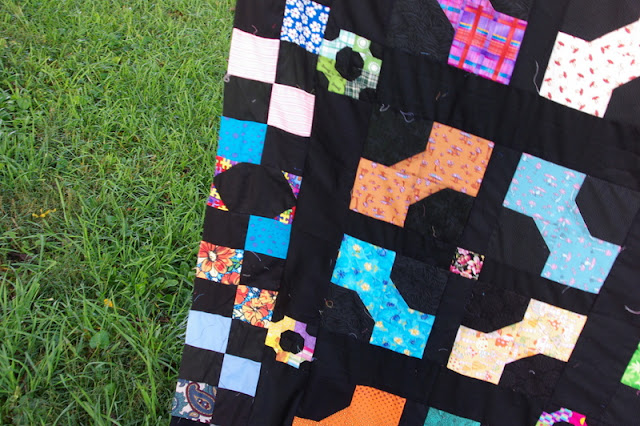 The two sides didn't divide evenly by six so I ended up adding a 4 x 6 inch lozenge in the center of the border strip. 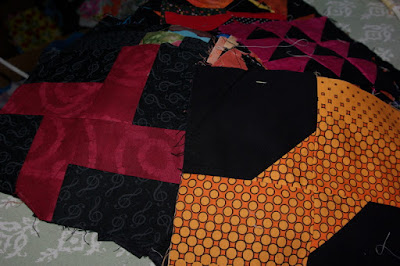 This was orphan block top #2 from the orphans with black backgrounds pile and there are still orphan blocks in the pile.  (Coddiwomple was top #1). Stay tuned.

Moving it Forward Monday at Em's Scrapbag
Posted by Cathy at Monday, September 30, 2019

Those tiny bowtie cornerstones are brilliant! You really did a great jib turning those orphan blocks into a great quilt.

I greatly admire that you don't diddle around with design walls, and I strive to emulate that. And the name Bow Diddley made me laugh :)

Those bow tie cornerstones are so cute! Black is such a great unifier, and you can never go wrong pairing it with brights. And I agree with Louise; Bow Diddley is a hilarious name!

The tiny bow ties are so cute!! Perfect simple border shows off the colourful Bow Ties to perfection!

You have a great imagnation! I love it.

What a great name for your quilt top (aka Flimsy)! Diddling around seems to work wonders in your sewing room. I really enjoy reading how you work with a set of Orphan blocks, use your imagination, add a bit of this and a bit of that, and Hey Presto, a new quilt is born! And lots of scraps get used in the process.

Love your "one thing at a time" process. Thanks for sharing it. I often work that way too.

All those stray threads on the black background made me chuckle. I have the same problem! Black fabric is like a magnet for every stray piece of dust, thread, hair and paper. Bow Diddley is such a creative use of extra blocks. Good job! Sandy at sewhigh.blogspot.com

They look striking against the black. Someone will enjoy your wonderful quilt. Congratulations on getting these orphans off to a new home.

I love it! The black background makes the bow ties pop. The bow tie cornerstones are perfect. What an awesome finish!

Great job! It looks like you planned the quilt from start to finish!