What Happened To Those Pink Crumbs? 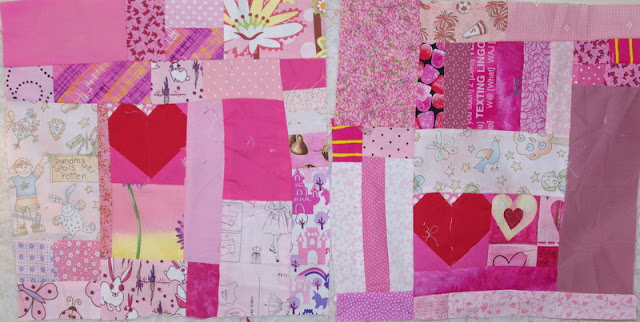 It seems like I've been sewing up pink crumbs all month long.  I define crumbs basically as any scrap less than a 12 inch square.  A lot of the pieces are very small and a lot of the pieces have curves or angles.  I define chunks basically as any scrap greater than a 12 inch square but less than a fat quarter.  I've been making blocks each month using crumbs in the Rainbow Scrap Challenge color of the month.    At the beginning of next year I'll see how many donation quilts I can make from the blocks.

And so...
I made two heart centered twelve inch slabs. 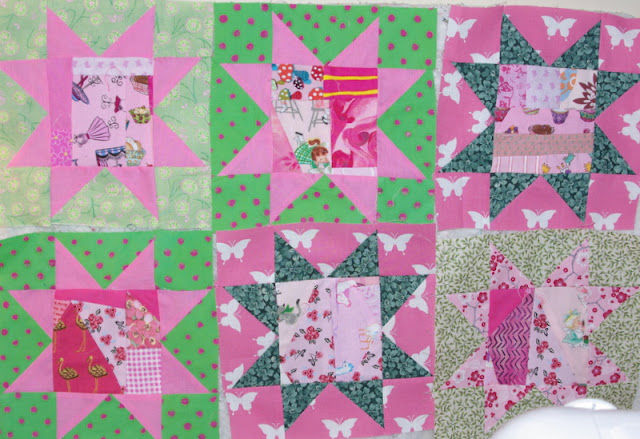 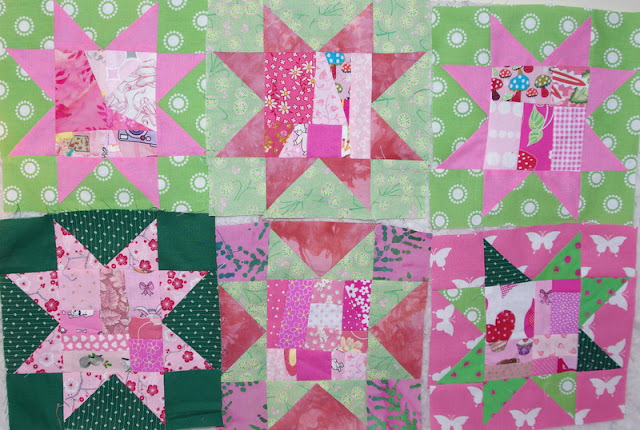 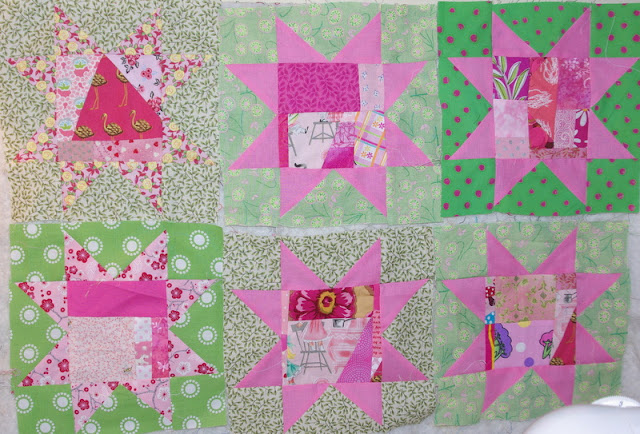 I made 18 eight inch crumb stars.  For these I've been using chunk scraps in complementary colors. If I have no chunks I pull from stash. 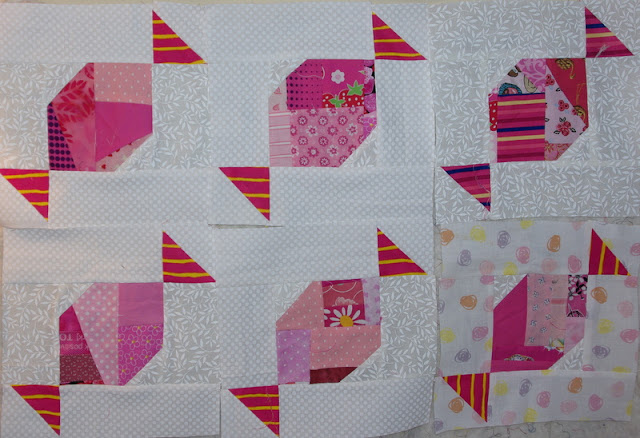 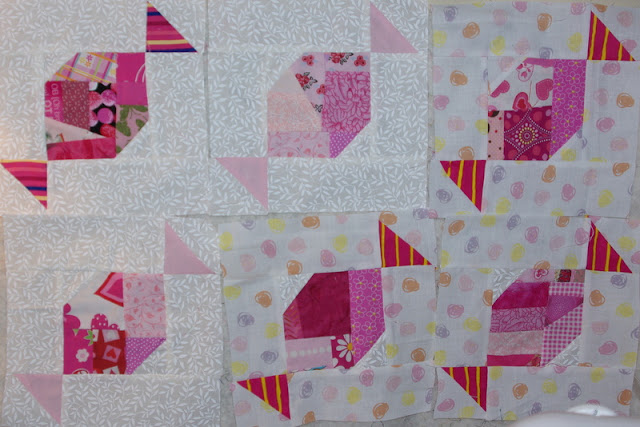 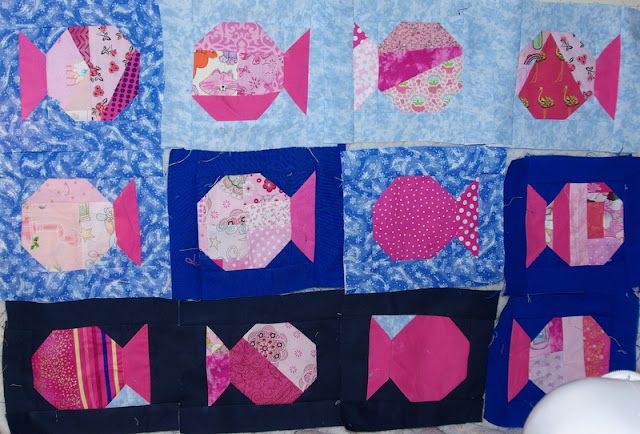 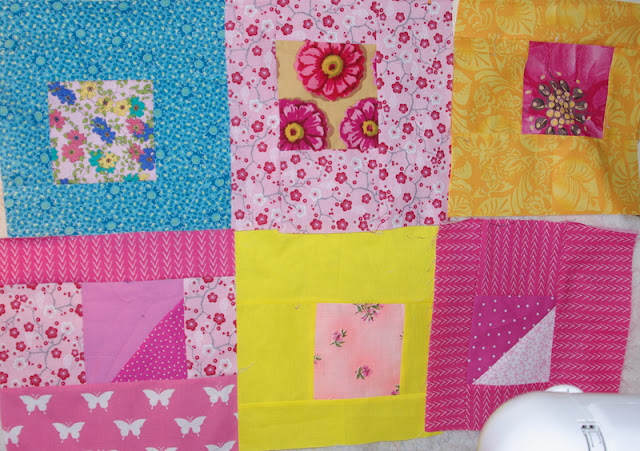 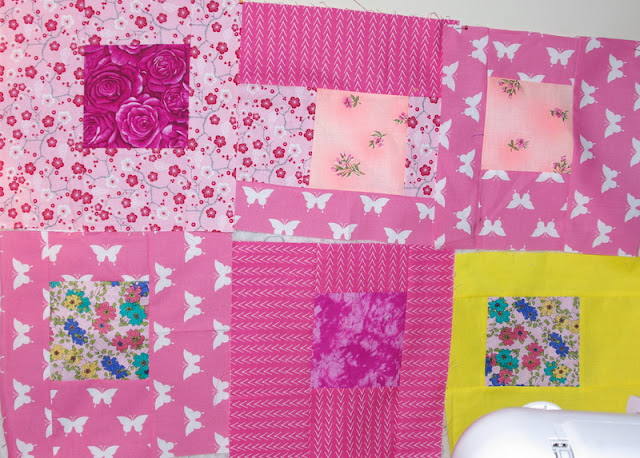 I ended up with a little mixture of four inch blocks.  (I THINK that pink calico in the four patch is left over from a sundress I made my daughter when she was about 4 years old.  She will be forty-two in July.) 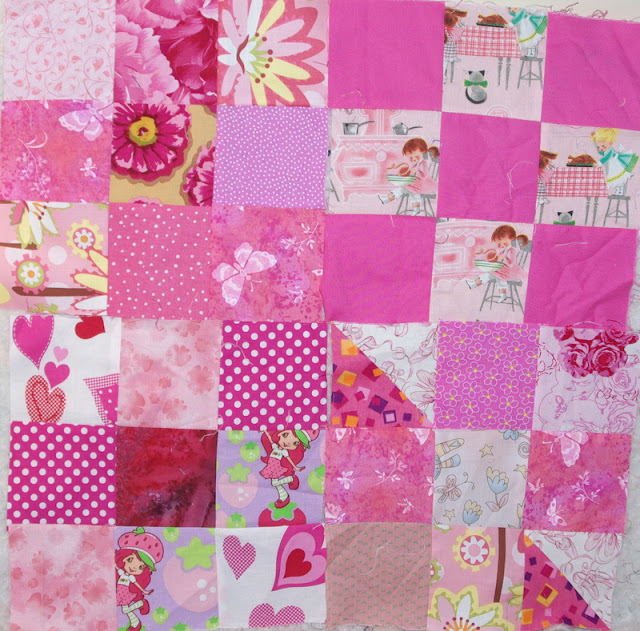 Four nine inch blocks.  (The fabric with the little girls in the nine patch is left over from aprons I made the granddaughters when they were about six years old.  They will be fourteen later this year. I also gave them Easy Bake Ovens that year. If I remember correctly it  was the last year the ovens used a light bulb for a heat source. ) 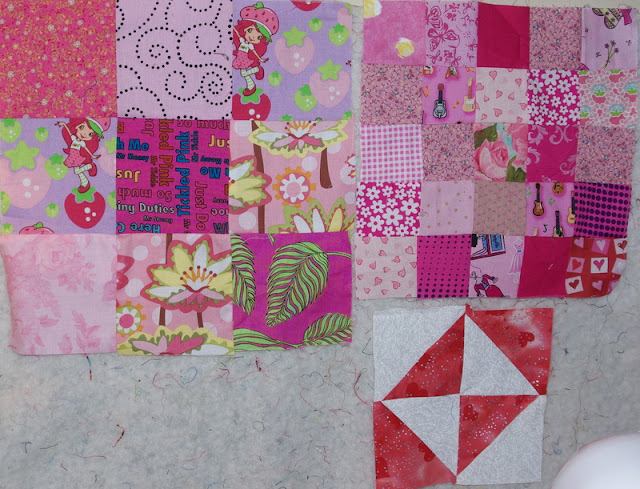 Gosh that was fun.

I see in June I'll be working with aqua/teal/turquoise scraps.

A very productive month. Am I safe to assume you don't do these all in one sitting?

Very impressive! Love all the pinks and what you have done with them.

So much pink my mouth started to pucker! But quite glad to have you back at it.

Lots and lots of pink goodness! Your scraps are deep and wide, and clearly your memory is long :) I'm liking the Mendotas very much, but the crummy candy is my favorite.

I still have pink crumbs scattered all over my little side table and lots of partially sewn larger crumb blocks that still aren't quite big enough. I never know whether to keep trying to finish some of them or throw them in a box and move on to the teal/turquoise. It will be a busy month if we get some rain so I can stay inside ans sew. Very little rain in May and they just announced that it was the warmest May in Rochester ever.
Pat

Sweet; Cathy's Confectionery Company!
Great piecing and variety in your blocks.
They're going to make up into fun quilts.

Goodness, that's an impressive collection of pink blocks! Particularly love the stars and Candies. I can see some great Donation Quilts being sewn next year.

WOW you really did a whole lot of pink beauties this past month! I love those cute fishies! hugs, Julierose

It's been fun watching too.

I love the stars and the candy blocks.

That's a lot of fun pink, Cathy! I really like the stars with the crumb centers.