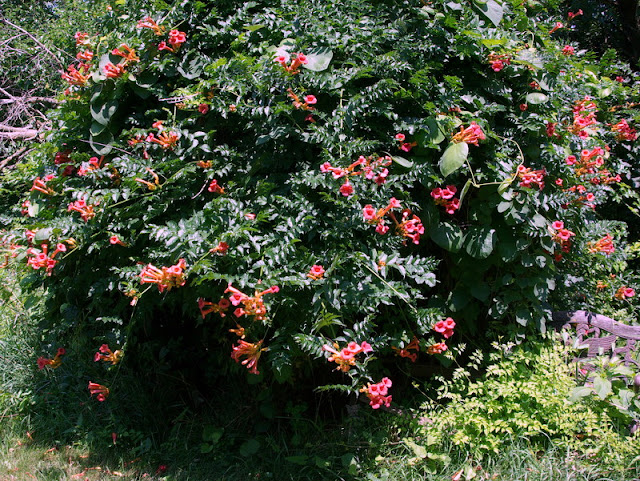 I still have not gotten caught up on all of the weeding after we had a week of rain at the end of June and now it is warm so I go out right after sunrise to start working in my gardens until lunch time at around 11. That means I get up very early to eat breakfast (usually yogurt and a piece of homemade bread toasted) and enjoy a couple of cups of coffee before venturing out.
This is my unruly Trumpet Vine. It is on a wooden trellis archway that has caved in on the sides and I keep trying to repair the trellis best I can but some of the stems on the trumpet vine are now like tree trunks.  I really should cut all of this down and tear it out but I also have Dutchman's Pipe and Clematis interspersed through there. Hummingbirds love that Trumpet Vine. I used to have a bench next to it so I could watch all of the visitors to the Trumpet Vine when it was in bloom. But the wooden slats rotted away and the bench is no longer functional. And Trumpet Vine new starts are constantly springing up here and there around the garden as you can see on the right hand side. As part of my normal weeding process I spend several hours a week just cutting or digging out Trumpet Vine starts from the Cottage Garden. 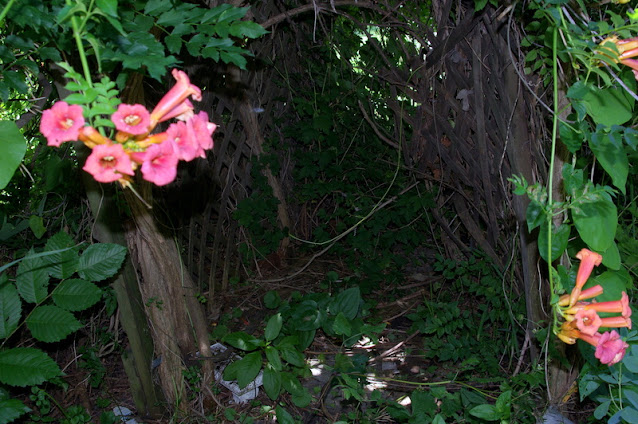 This is the view from the back.  I have large square stepping stones in there but one can no longer step through there. I used to plant pansies in between the stones. The grandkids liked to hang out in there in the summer.  I hate to think about tearing it all out. Maybe I will. Maybe I won't. 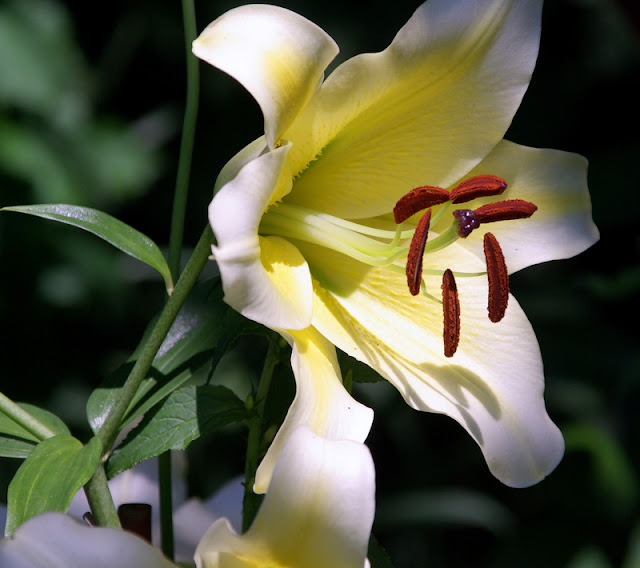 New this year in my Cottage Garden are Tree Lilies (aka Orienpet or OT Lilies). They are a cross between Oriental Lilies and Trumpet Lilies and they are oh so fragrant. Over time they should multiply and grow taller - some up to eight feet. Right now these are almost as tall as I am. 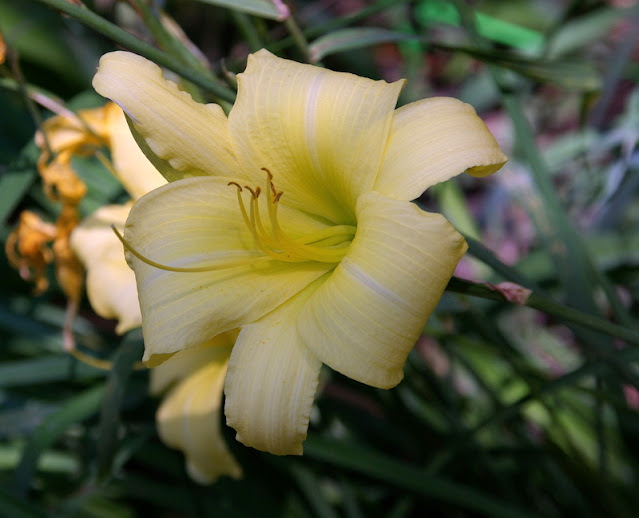 The Daylilies are still in bloom all over the garden. I have them in lots of different colors. 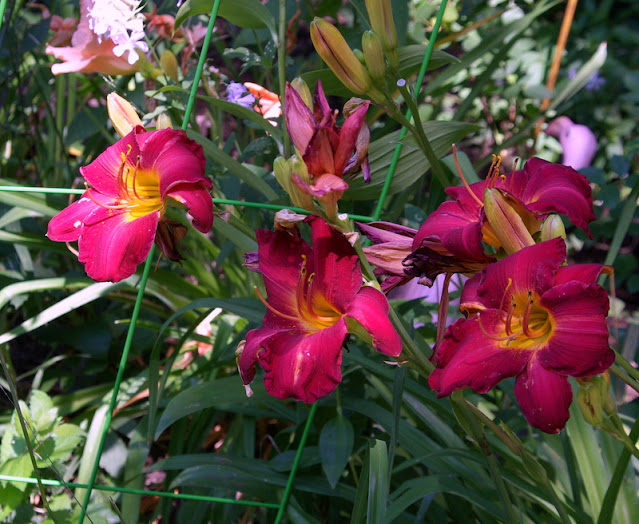 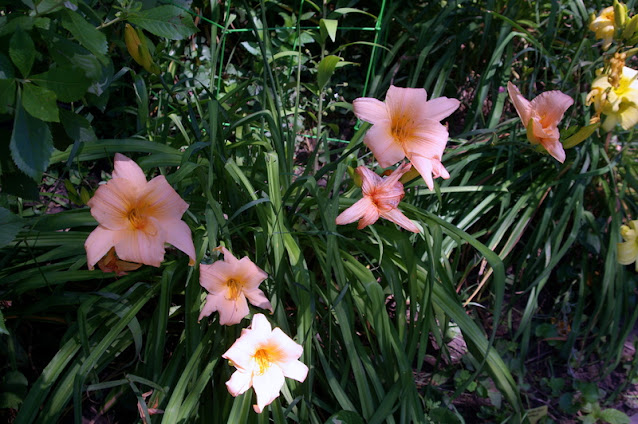 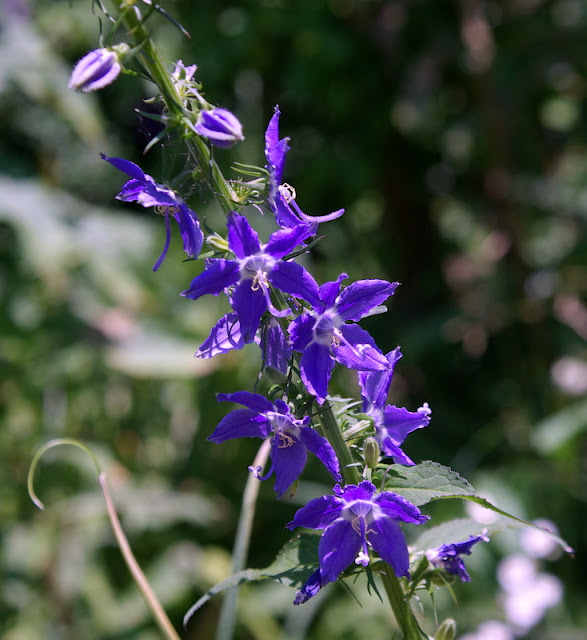 The Tall Bellflower (Campanula Americana) magically started  appearing here and there throughout the Cottage Garden a few years ago. I couldn't identify the leaves  as a flower or as a weed when I first saw it sprouting up so I let it grow until I could identify it.  I guess it can get invasive; however, it is easy to pull out if I don't want it somewhere.   I've been working on a new Native Wildflower garden and I see it popping up in there now too. It adds a pretty touch of blue. 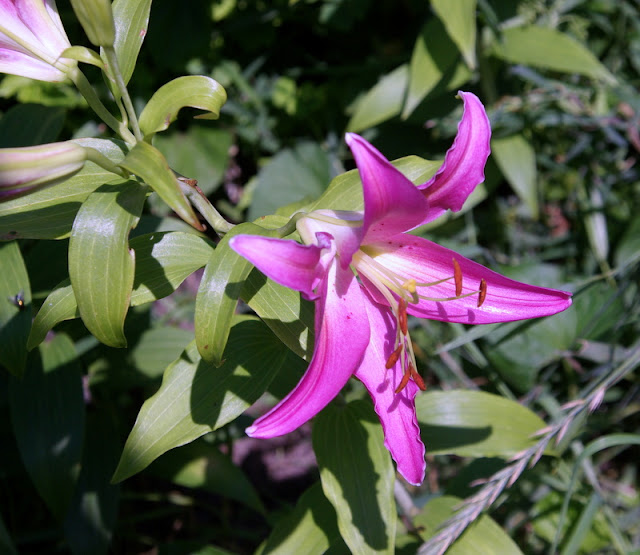 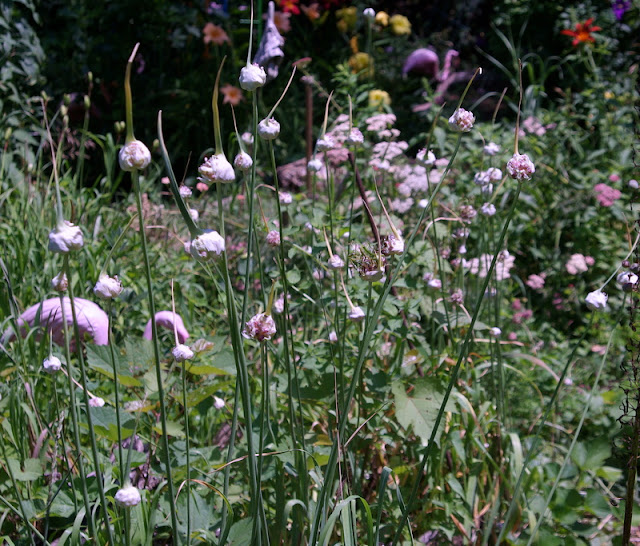 One of the things I've planted here and there over the years throughout the Cottage Garden is Rocambole Garlic. I had read somewhere that it may help deter rodents and deer so at first planted it around my roses. After blooming it produces a set of little bulbils at the top of the plant which are edible and can be used like any garlic. Or they can be planted. After two years a garlic bulb forms. But the garlic in the first year is a round and that can also be used.  I freeze garlic so we rarely have to buy garlic anymore. Does it keep deer and rabbits at bay? I don't think so. 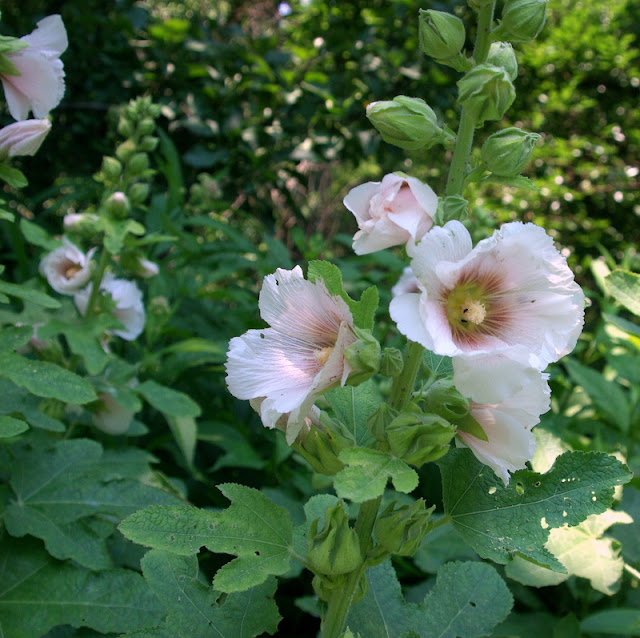 Hollyhocks are glorious this year. I have a mixture of colors. 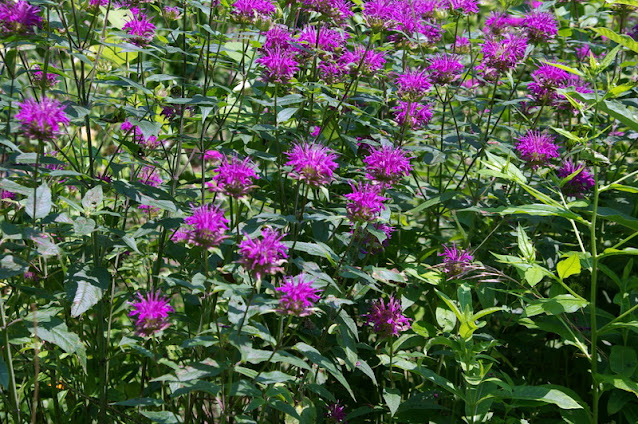 The Bee Balm (aka Monarda) has been buzzing with bees. 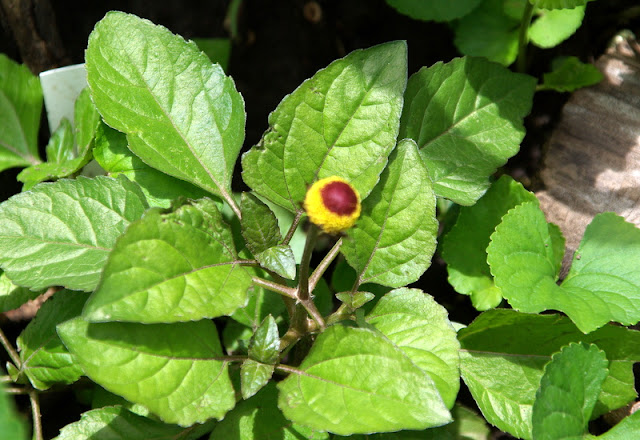 Have you heard of Toothache Plant (Spilanthes)? It's a new annual I grew from seed this year. The flowers have anesthetic and anti-inflammatory properties. It is also called Sichuan buttons, buzz buttons, tinglowers and electric daisy. I haven't had the courage to taste one of those buzz buttons yet! They are just a fun addition I planted near a  pathway. 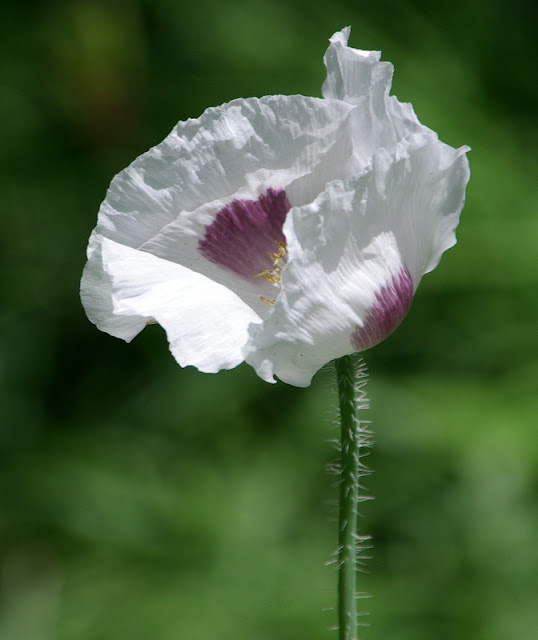 This year I also planted several different varieties of annual Poppies. But the rain kind of wiped out most of the delicate little leaves on most of the plants so I'm not sure I'll see any more than just this one bloom that occurred before the last week of rain.  Darn it! I was hoping to have lots of blooms and then lots of seeds because they are supposed to reseed easily. 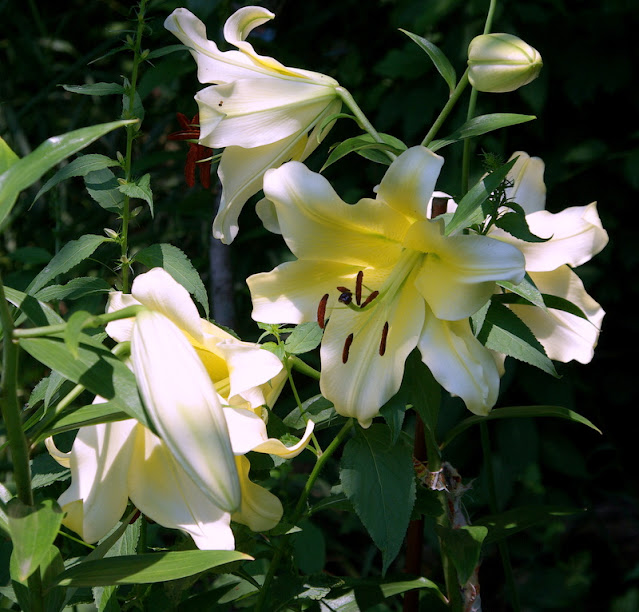 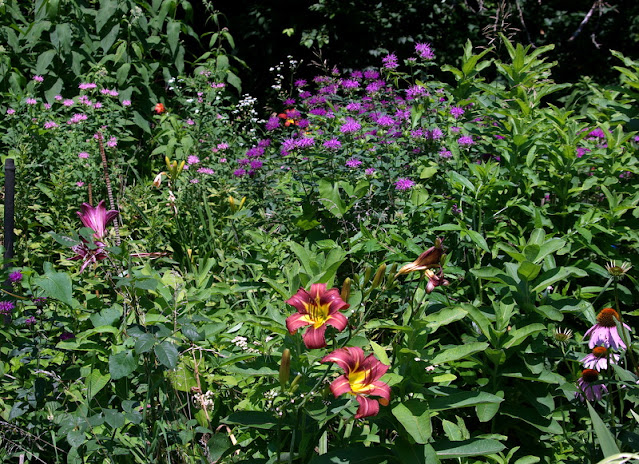 I previously mentioned Bee Balm. You can see it in the back of the photo. I have three different colors - pink, purple, and a sort of purplish pink. 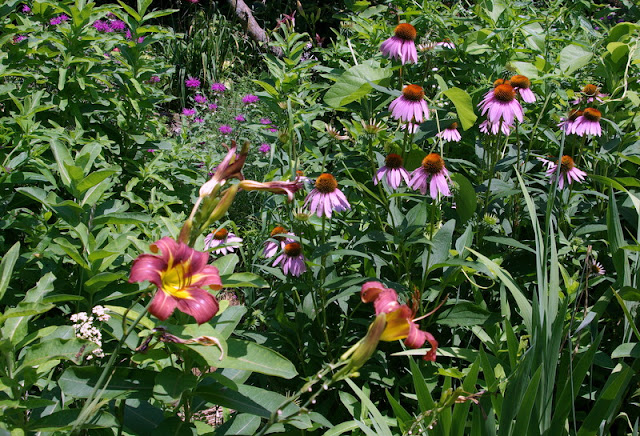 There's actually a narrow pathway in there along side the Purple Coneflower but it is rather hidden by all of the growth.  Later on I'll see Goldfinch sitting on top of the Coneflowers picking out the seeds. 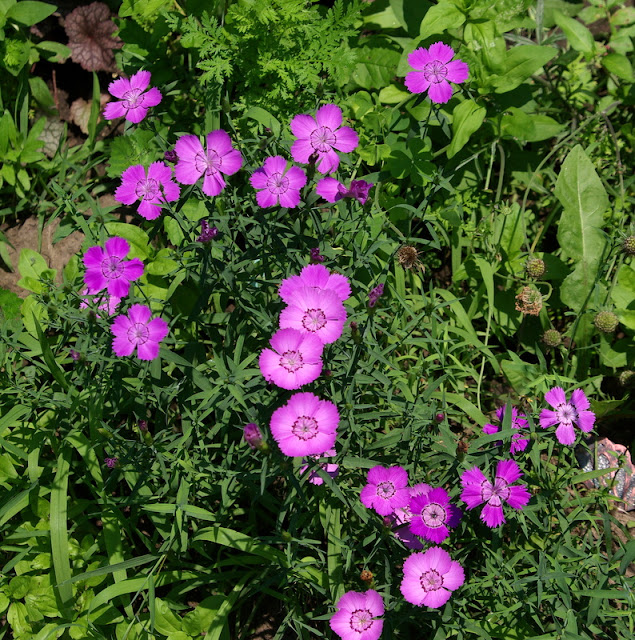 Dianthus in bloom. I have several varieties of Dianthus --both annual and perennial -here and there throughout the garden. I love the scent. 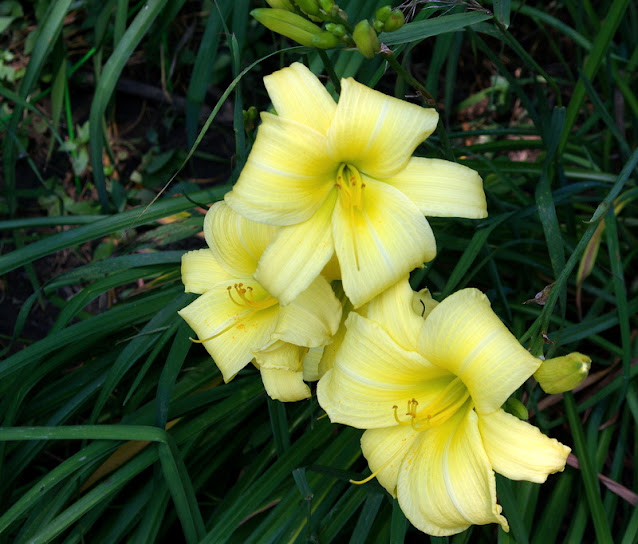 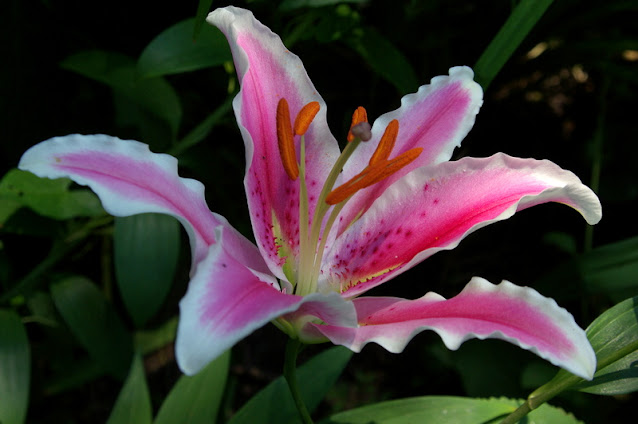 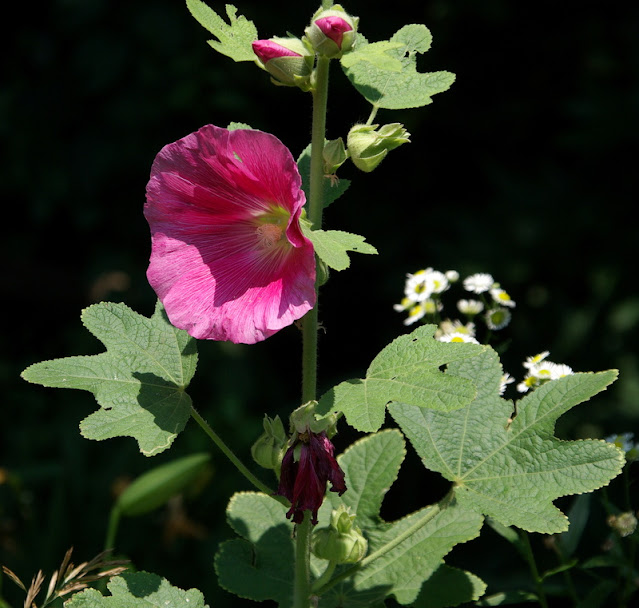 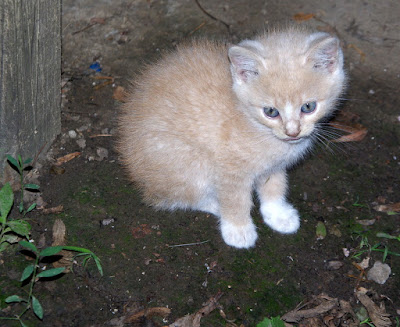 And look who showed up the other day. We run a Cat House, er I mean a bed and breakfast in the barn for free range cats. They are still a little timid but I know they will soon be following me around. I called this one McDuff. 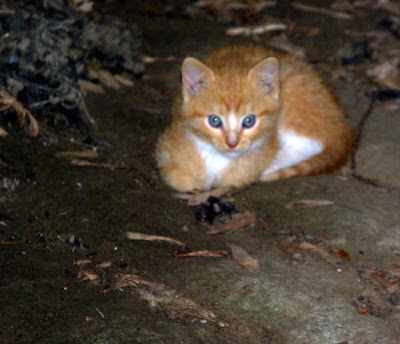 This one is McNally. My paternal grandmother was a McNally and all of the McNallys had red hair until it turned gray. 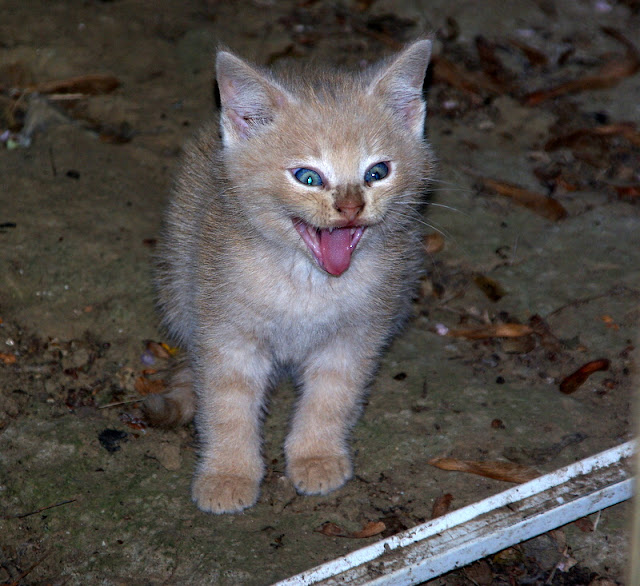 This one I call McGinty. When we stayed at our grandparents house on the farm in the summer my brothers would always be off into some kind of trouble and my grandmother would always say "What are you up to now, McGinty?" I never knew why she called them McGinty but it didn't sound like she was calling them a nice name. Actually, though, McGinty is a rather sweet kitty caught in a nasty pose. 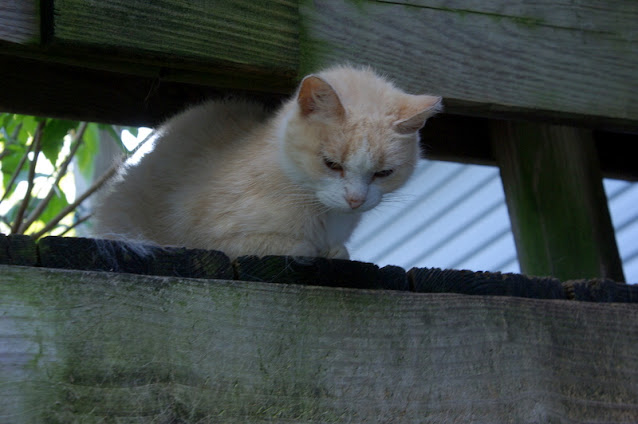 Mama Hazel on the deck looking down from above guarding McDuff, McNally and McGinty while they explore. 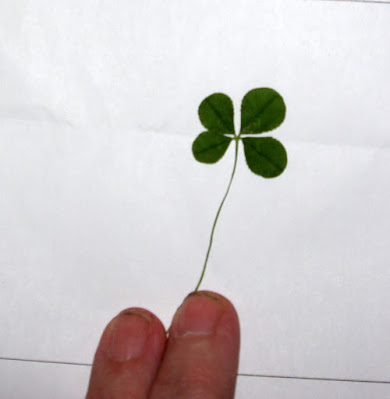 I was feeling rather depressed the other day when I saw a lot of groundhog damage in a shady area where I just planted a few Coral Bells and Astilbe. They had pulled up most of the plants and left them beside their holes. I replanted everything and then the next day I found the plants all pulled up again. I decided to move the plants to a different shady area and when I went to pick up the hose end I bent down and immediately spotted a four leaf clover. Ok. I'll take the good luck! I've pressed it and will put it in a little frame.  And I've ordered some castor oil try to rid myself of that darned groundhog. I hope there's only one.  Yesterday I saw it or they tore up my Cathedral Bell vines. 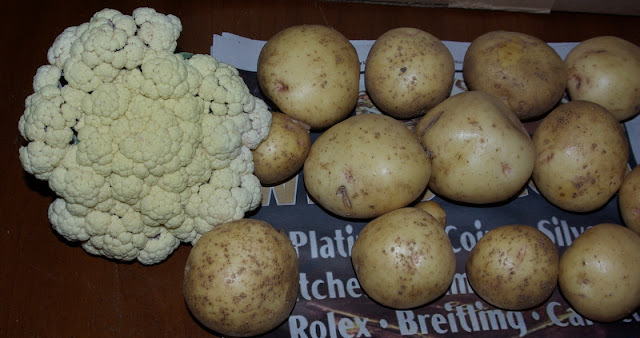 And in the veggie garden we have been harvesting cauliflower and potatoes. Yumm!
And now the sun is up so I need to go.
Posted by Cathy at Wednesday, July 07, 2021

Love those baby kitties! Your flowers are beautiful! Can a person just scatter Hollyhock seeds, and they germinate? We have a hill full of brush, and I'm wishing to add color.

Such wonderful flowers. The people I knew who had trumpet vine either had to tear it out or watch it destroy their space. I have a small flower garden as my lot is 55 x 145. Trying to get pictures up on my blog of the July bounty. No room for vegetables, so I support the farmer's market.

Oh my goodness, your thumb is amazingly green. Your garden is gorgeous. I love all the photos especially that beautiful poppy.

I always enjoy your garden pictures! Your lilies are so so so gorgeous!
I've never heard of a toothache plant - anything named buzz button deserves a little side-eye...

So beautiful! I have never heard of the toothache plant...sweet little button flowers! I used to have barn cats, and I miss them. The kittens were such fun to play with, and the mamas were terrific hunters! :)

Thanks so much for posting all your flower pictures. Your gardening schedule sounds just like mine! Just weeding these days, too hot to plant anything. I moved here 4 years ago and my biggest problem is the trumpet vine. It comes up everywhere and no amount of digging or cutting out will get rid of it. What a pain it is..... I wasn't aware of the attraction of beneficials tho. Hope you can deal with it well.Thanks again for the pics....

Another wonderful Wednesday wander through your garden. I don't have nearly that much in bloom. The day lilies are just started. I did get the deer repellent sprayed last week, so hopefully I will actually get to see some of them this year. Saw first zinnia flower today, along with Japanese beetles which were only on one plant. Must have been a tasty one. We went from near 90 yesterday to 72 today with heavy rain expected tomorrow. At least that means I'll be able to sew.
Pat

Beautiful flowers and gorgeous kitties. Such unusual colourings, never seen a cat with the colour of nose McGinty has. Has he been lapping whisky?

I love seeing all your garden wonders! Your flowers are so different from what we can grow here (except the day lilies), so it's a great treat! Thanks for taking the time to share everything.

Fabulous garden! I wish sometimes I had a bigger flower garden, but know I’m not up to the task! Gardens take a lot of work! Thank you for sharing yours!

Love those gorgeous kittens! What, no McTavish's?

Fantastic garden! Flowers are just beautiful. And the kittens-I'd be chasing them all day just to give them squeezes! Lol. Thanks for the beauty :)

Wow!! I know your garden is a lot of work - but I sure enjoyed the tour of it!! everything is just so colorful!!! and the kitties - too cute!!!