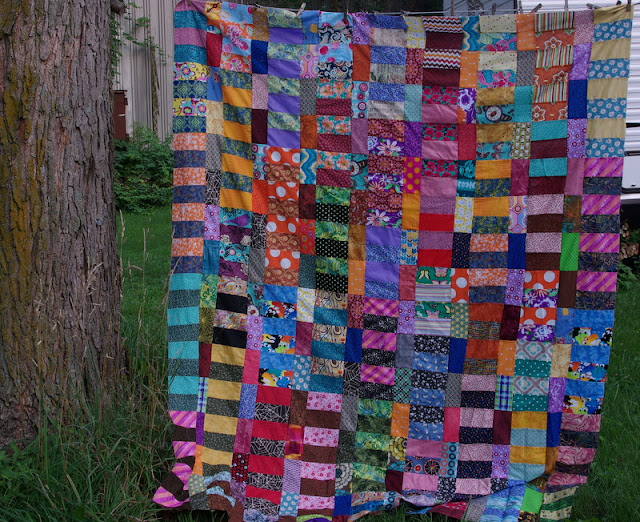 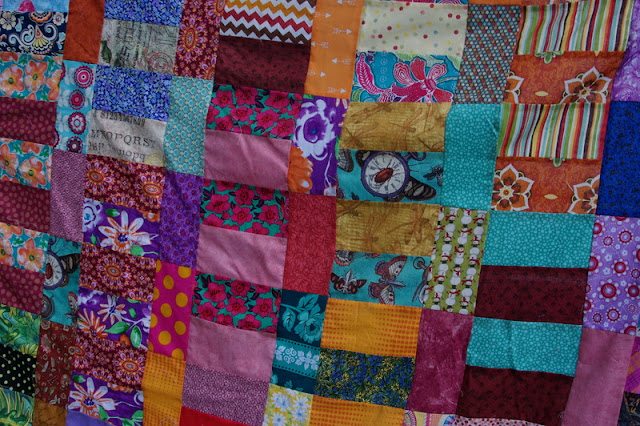 Back in June I blogged about some 3 inch width of scraps I came across while sorting through boxes of scraps that came from a clean up of my cutting mat over the years.  I used to put leftover scraps from a project into bins of scraps sorted by width but I never did have a 3 inch width scrap bin so those pieces usually went into a box with other odd sizes of scraps. 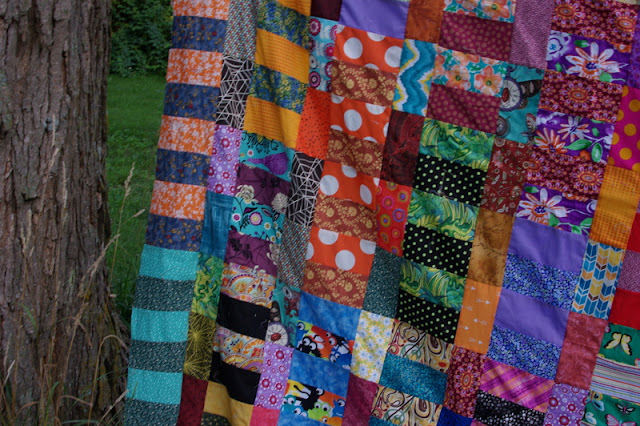 So, anyway, I also blogged that I would make a Coin quilt and so I have. Well, it's not actually a quilt yet but it's much closer to being one than the last time I blogged about those scraps.
I like making scrap quilts from actual scraps because I usually have a difficult time figuring out what fabrics to use in a scrappy looking quilt.  With actual scraps all of the decisions are made for me. I like it when scraps happen! 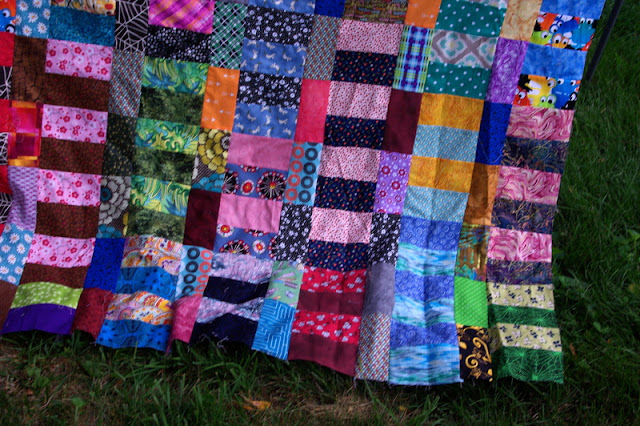 I didn't have quite enough 3 inch width scraps in my little starter box for this size of quilt so I dug through an overflowing box of quilt back trimmings for the rest of the of the pieces.
I sewed two fabrics together and sewed up a bunch of strip sets which were then cut into 5.5 inch lengths and sewn together into blocks of varying lengths and then those blocks were sewn into columns. The columns are joined with sashing that consists of more 3 x 5.5 pieces. 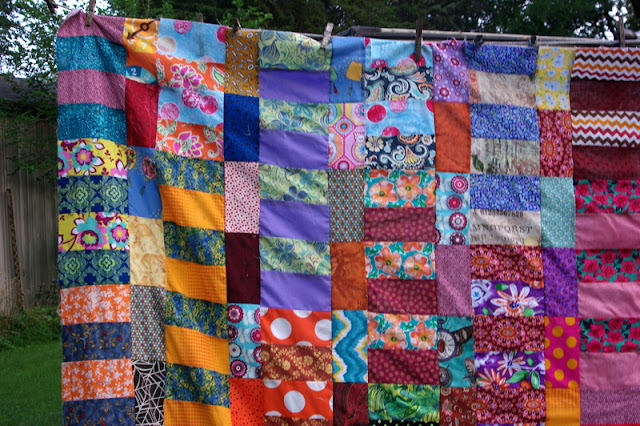 I was surprised by the number of aqua and orange fabrics in the scraps. I didn't even realize I used that much of either color but I can remember most of the quilts that used those fabrics on the front or the back. 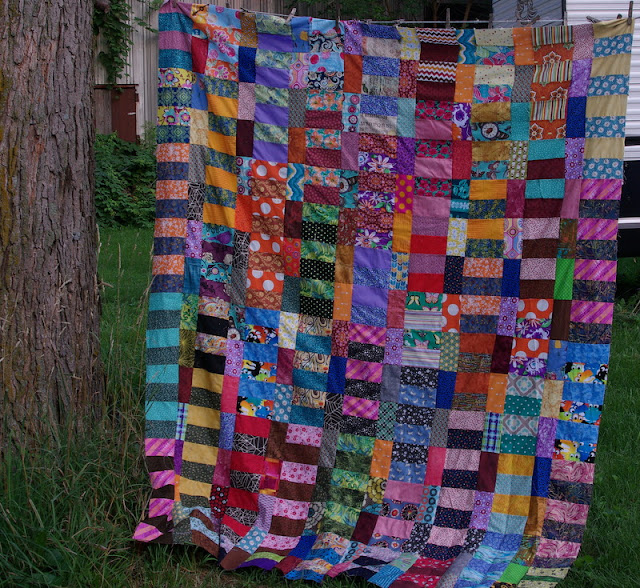 Like usual (and like grandma) I sewed everything together randomly. A comfort quilt doesn't get hung on a wall so I usually don't dither away my time arranging and rearranging my blocks. I know no arrangement would probably ever satisfy me.  And with that said...now that I see it hanging on the line it appears to me that there is a purple "hole" in the middle - two purple fabrics without much contrast. And it is kind of weird that the two six patches of googly-eyed monsters and solid blue ended up in the same place in two different columns.  And..
Posted by Cathy at Tuesday, July 27, 2021

I love it!! Great idea for those 3-inch scraps!

Great quilt, good way to use up those odd strips. Chinese coins will be one of my RSC projects for next year, from the 2" strip box though. Happy stitching!

Random fun!
I was recently sewing together a scrappy top and realized that in my zeal to keep two of the same fabric from falling next to each other I'd managed to make three in a row of the same background fabric. I just sighed and kept going...

Having groups of the same two prints (rather than totally, totally random) makes this easier to look at, I think.It's kind of like Bonnie Hunter's recent design Bitcoin with a Sane & Crazy twist. (That is, the vertical patches.)

Another great scrap quilt. I love Coin quilts and like your idea of making columns from vertical bricks.

In statistics class, they teach you that successive coin tosses don’t always come out “even”. You can have long runs of heads or tails. So your googly eyes patches are just following that principle. I really like the vertical lines between the coins. Dot

nobody would ever know this wasn't planned perfectly from the start....luscious scrap quilt!

But those are the things that make a scrappy quilt so interesting . . .

Audrey just finished a coin quilt with sashing similar to yours. How clever of both of you. These dark and bright colors look so good.

I love the richness of the colors in this quilt. Scrappy quilts are the best!

Another winner! A great way to use up strips!

And,,,who cares? it's beautiful and "natural"

I just love scrap quilts. You did a great job on this one. It is a good size too.

What a glorious scrap quilt!!!!! I just want to curl up with this one with a book!!!! You have some great fabrics!!!!

Love, love this finish and the quirky free feeling it exudes! It's happy and perfect for a comfort quilt. I would struggle to sew it together without fiddling with color placement. The thing is, even when you fiddle you can end up with areas like you mention. Sometimes I can get so focused on one particular area that I don't notice moving one block created a new "problem" somewhere else. It can be an endless battle.

Great use of scraps!

Thank you for sharing the brilliant colours in the Zinias and your quilts. Just so uplifting.
Kay.