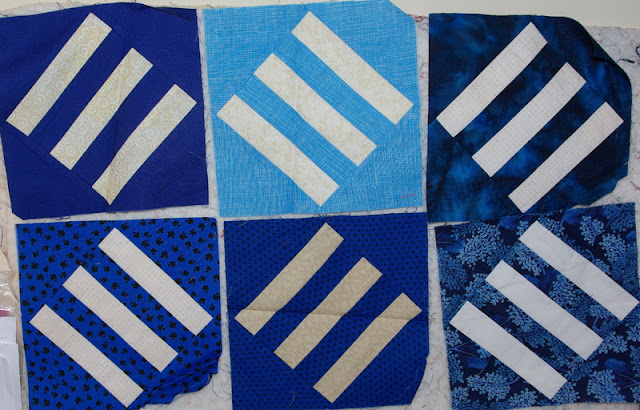 Dark blue is the July Rainbow Scrap Challenge (RSC) color of the month. I finished most of my blue RSC blocks previously in the light blue month so thought I would dig into the UFO bin to see what might need some blue that I could concentrate on this month.  I found some old Block Lotto Diagonal Bar blocks I won back in 2014. 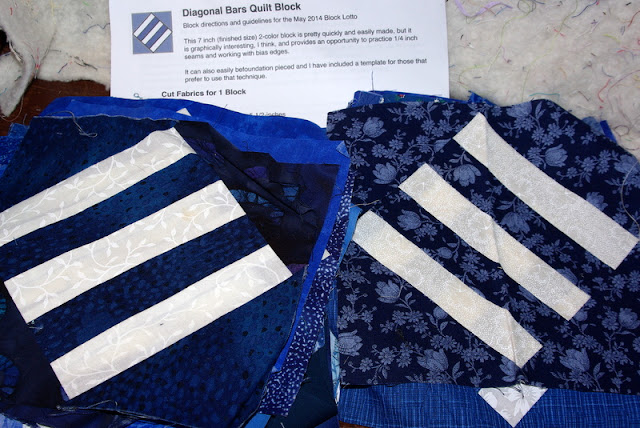 I think there a little over fifty blocks that finish at 7 inches. I'm thinking I'll just have to make a couple more blocks and I'll make a sashing and get these blocks made into a top this month. 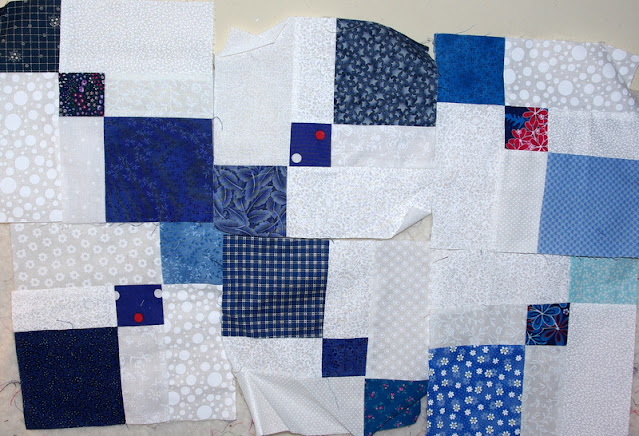 Then I found these even older Double Disappearing Nine Patch (DD9P) blocks from a swap that might have been around 2012 or so. One of the addy labels on the back of one of the blocks had the year 2012 on it. 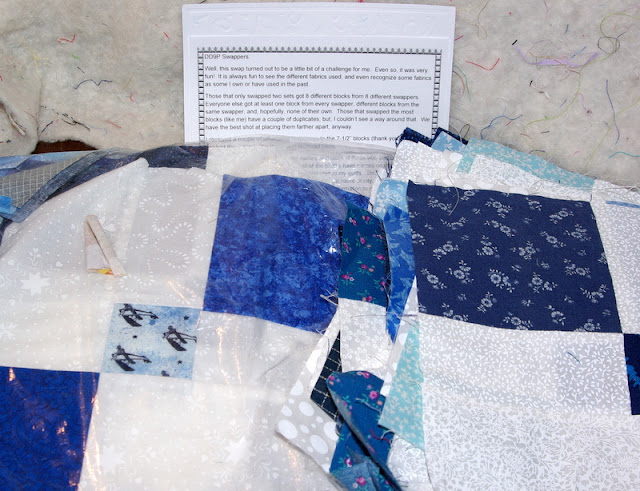 I have over 70 blocks that I think finish at 7.5 inches. Some were swapped and some I made. I didn't really like making these blocks. Honestly...I'd rather just cut the pieces and make the block as it ends up. It seems like a lot of extra steps to me to make one block and go to the work to cut it apart and then flip around pieces and sew everything back together again
.   I think these blocks have been a UFO for a long time because I didn't like the process. But, really there are enough for a nice sized donation quilt so might as well get them put together. 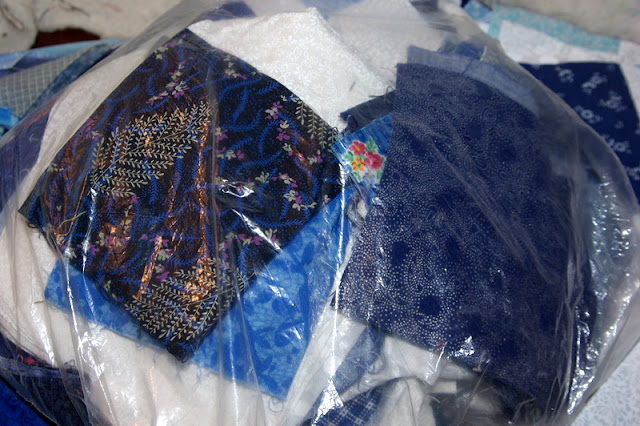 There was also a big bag of parts in with the DD9P. I don't think I'll need them for the DD9P top but you never know.
So...as long as I'm going to be working on these blue things during the RSC dark blue month of July I might as well declare a goal for One Monthly Goal (OMG).   My July OMG is to get at least one of these sets of blocks to flimsy stage. I actually hope to get both of them to flimsy stage but I think July is going to be a very busy month for me so I don't want to make overly ambitious goals for myself.
RSC ScrapHappy Saturday
OMG at Elm Street Quilts
Posted by Cathy at Saturday, July 03, 2021

These will both be very nice quilts. Blue and white is such a good color combination. And what a good idea, to work on some UFOs! I should try that.

You found some great block collections to work with this month, Cathy! I haven't seen the Diagonal Bar blocks before - I bet they'll make a neat design. You make a good point about the D9P blocks!

I have to agree with you about the DD9Ps. They are a pain in the butt to assemble the “disappearing” way. I do love those barred blocks from Block Lotto, though! You’re smart to keep your goals simple this month. Mine are too pie-in-the-sky for a summer month!

Those diagonal bar blocks are really cool!!! It looks like a fun pattern!

Love blue and white quilts and a bag full of blocks ready to stitch is great. Good luck with getting one set of those blocks wrangled into a flimsy this month.

You've got a good head start on the month. You Go, Girl!

It's always a surprise sometimes to see what is lurking in the UFO pile. Lucky you finding enough blocks to make two donation quilts.

I did one DN9P and was frustrated because the reconstituted blocks kept coming out too small. I'd rather just put the blocks together in the first place. But, hey, you have to try different things to find out what you like and dislike.
Pat

Nice find in your UFO stash. Like the blue and white Bar blocks, look good in those colours. Good luck with putting together a flimsy, but I know you’ll finish both!

Great blocks and I am in love with the diagonal bar block. Your postage stamp quilt looks awesome in the previous post too. Happy quilting.

I recognize both those blocks because I was in those swaps, too! I had a heck of a time with the bars; they didn't turn out the specified size. (Something with the on-point setting.) I didn't like the DD9Ps, either -- too clumpy? -- but hung onto them for years.

I'm right there with you on the 'disappearing' blocks. It always seemed like the hard way to get to a particular block.
I've never seen those Diagonal Bars Blocks before - sort of like tipsy coins, eh?

How lucky for you to win those barred blocks. They'll certainly make a wonderful statement on a quilt. Good for you!

I think I saw some diagonal bars blocks somewhere. Now I'll have to search them out. Blues are beautiful.