What WAS In The Bin? 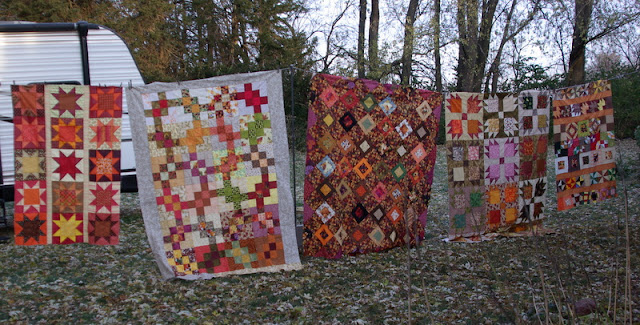 A few days ago I was wondering about what I could make from a bin full of "Autumn Stuff".
And now I know...flimsies (or tops if you prefer) for a whole bunch of donation quilts. Or do you call them charity quilts? Or comfort quilts? I never know what to call them. 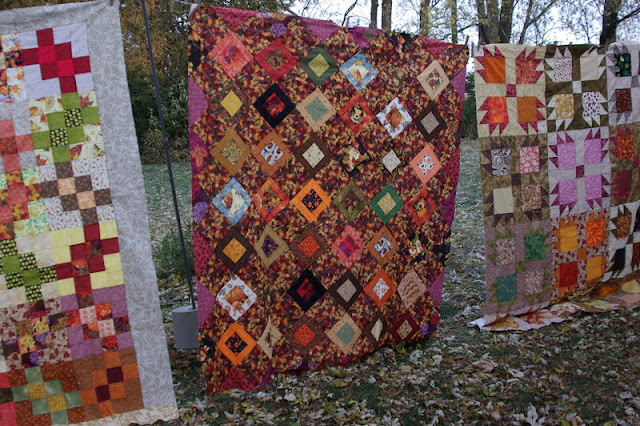 The forty-two Happy Blocks that finish at 6.5 inches were combined with some leafy yardage and set on point for this quilt that measures 67 x 77. 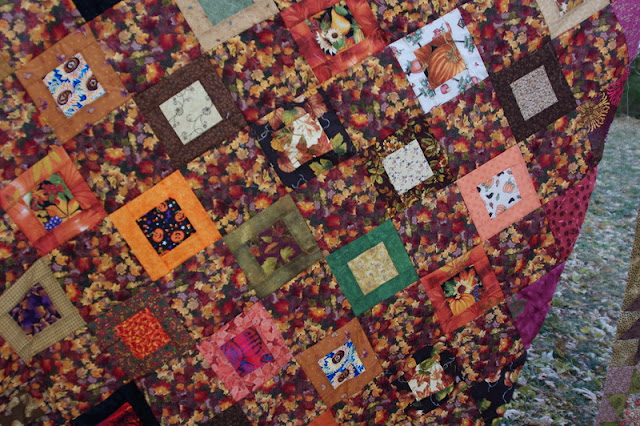 These blocks were from a long ago fall themed swap of Happy Blocks. I wanted to try a different layout for the blocks so set them on point alternating with squares of the same fabric. I don't have a lot of fabric that is of any length unless I purchased it on sale intended for a backing. Those leaves was one of those purchases. Since I used it on the front of a quilt instead of the back I then felt compelled to make a scrappy pieced backing for this one. 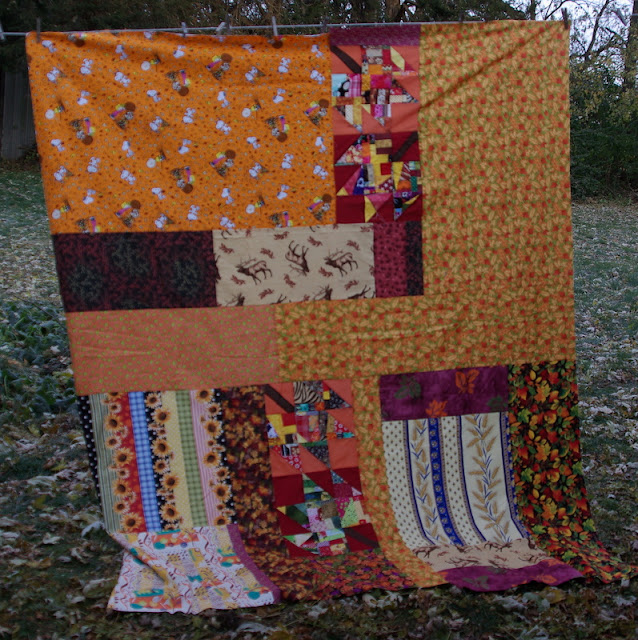 This is the scrappy pieced batting that will go with it. 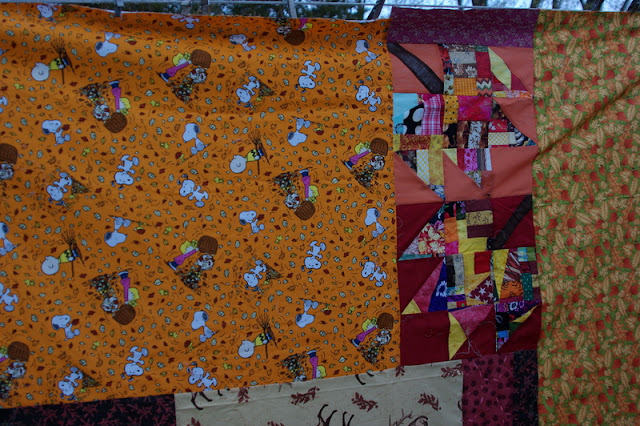 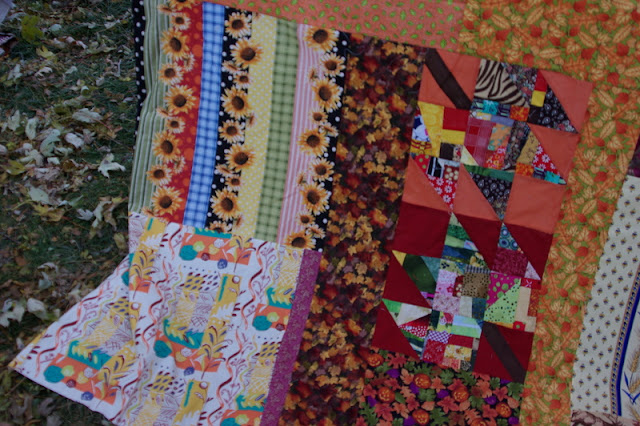 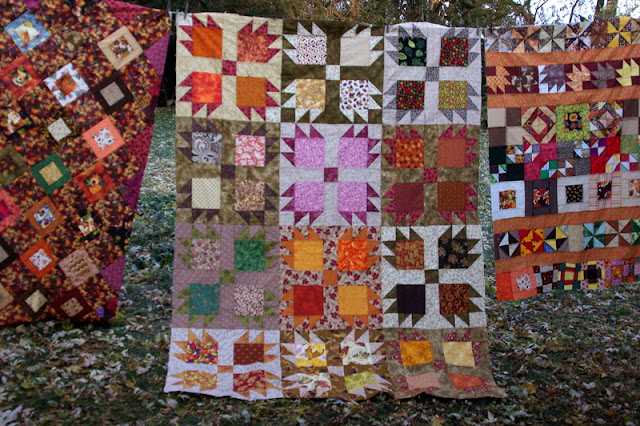 This quilt measures 63 x 84 and consists of 21 inch Bear Foot blocks as they are called in the Ladies Art Company Block Tool.  Bear Paw is a different block in the Tool. 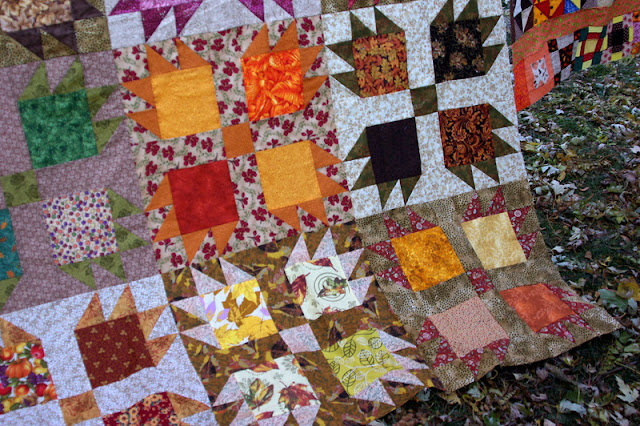 I used 48 of those 88 - 6.5 inch squares that were in the "Autumn Stuff" and used a variety of different leafy neutrals for the backgrounds and HSTs. 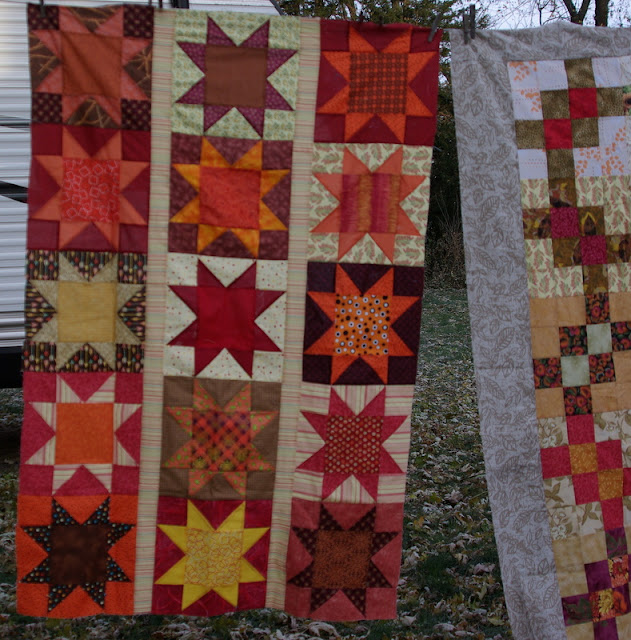 Fifteen more 6.5  inch squares from the "Autumn Stuff" were used as Sawtooth Star Centers.
This quilt measures 40 x 60 and stars finish at 12 inches. 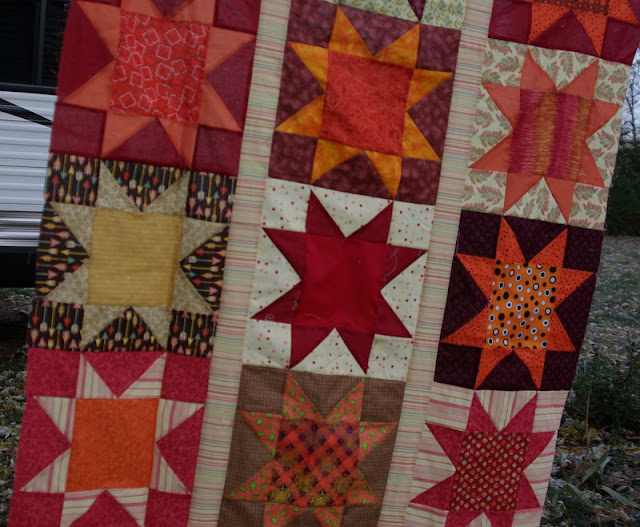 I picked the more tone on tone or geometric squares to use in this quilt so was not confined to using just autumn themed fabrics for the backgrounds and star points. 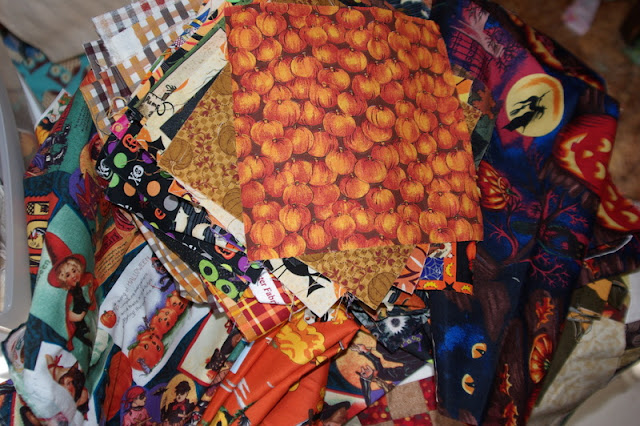 Other squares with pumpkins I put in a drawer with some Halloween fabrics to be made into a quilt later for my granddaughter who was born on Halloween and just celebrated her 15th birthday. 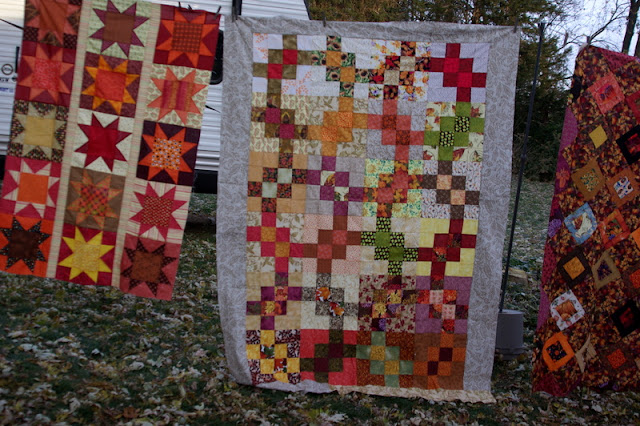 Next up is the top made with those Arrowhead Puzzle blocks left over from a long ago swap. swap. I had thirteen of those Arrowhead Puzzle blocks and pieces cut for 10 more. I cut pieces for one more and ended up with 24 blocks. I set them 4 x 6 which gave me a very odd sized 48 x 72 quilt. I have been trying to make more twin sized donation quilts this year so added borders to make the top 60 x 80.  I had almost enough of a  leafy light colored batik that I used because I thought it would help make the colors in the blocks and the block pattern stand out a little better than a darker border. 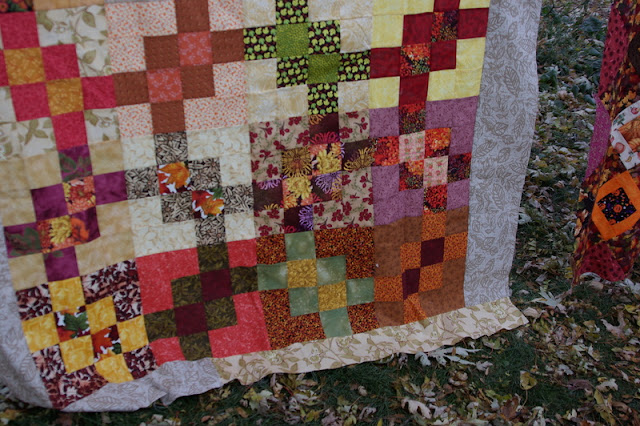 One of the reasons some of those 13 swapped blocks were orphans was because some swappers just didn't follow directions. Background for the blocks was supposed to be light neutral and that wasn't always the case.  I stuck those down in the bottom corner but now I'm kind of thinking they would have been better up in the middle. But that didn't happen and so it goes... 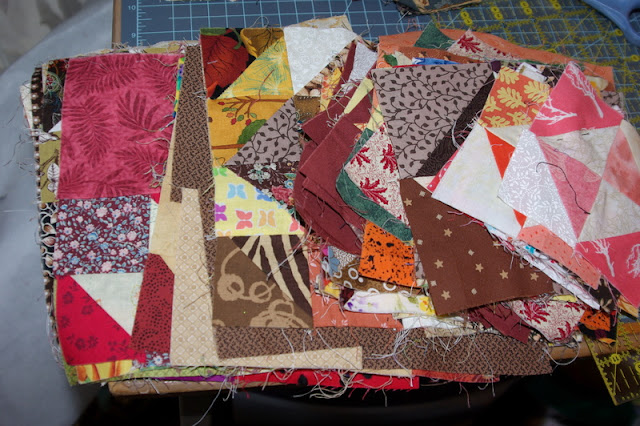 And that about used up the "Autumn Stuff" bin but I was on a roll and had the box of Autumn themed fabrics open so dug through the Orphanage (orphan blocks, if you prefer) for blocks in autumn colors. 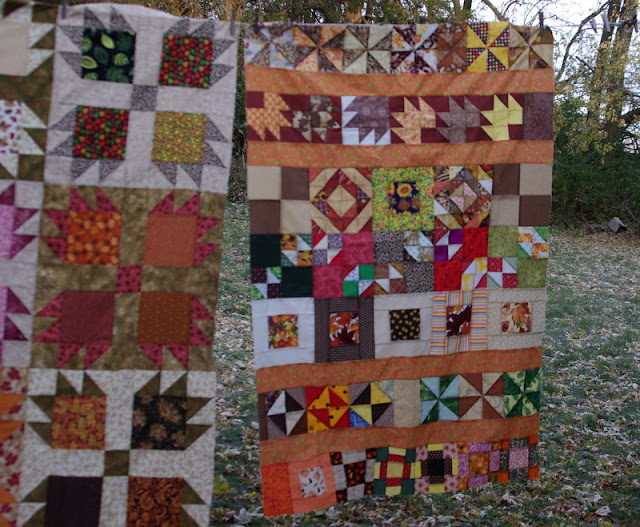 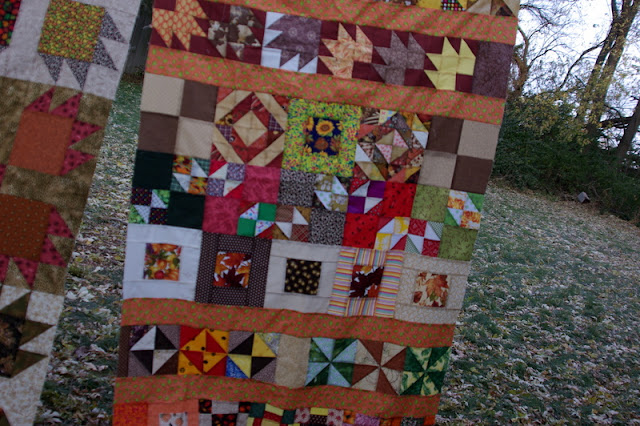 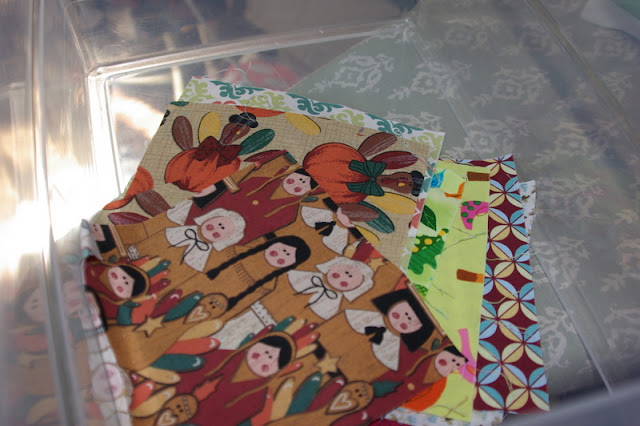 The "Autumn Stuff" bin is now empty except for a few odd 6.5 inch squares I'll probably cut into smaller squares. 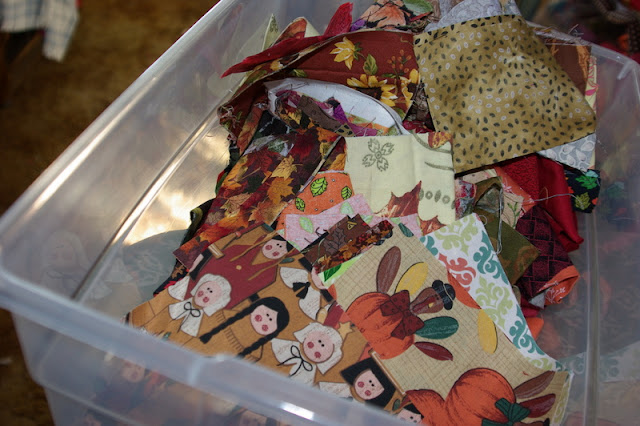 For now I've added them to the scraps left over from all this quilt making. Most are 3.5 inch pieces destined for the 3.5 inch scrap bin but there are ends of fabrics probably destined for the string box and other small pieces in there too.  I will deal with that stuff later in the week. 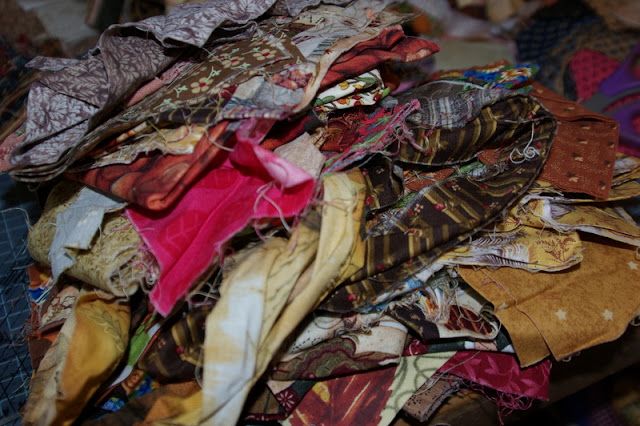 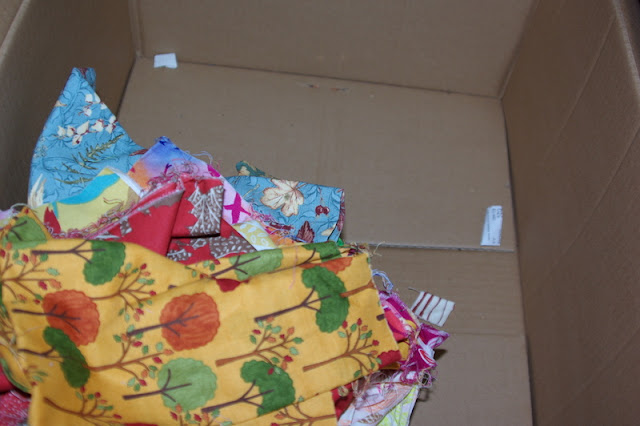 Oh, and this is all that is left in the Autumn themed fabric stored in a big old desktop computer box. These all have trees and I will probably use them as a backing for a Tree of Life UFO or Improv Tree UFO.  I can now put them in a much smaller box. 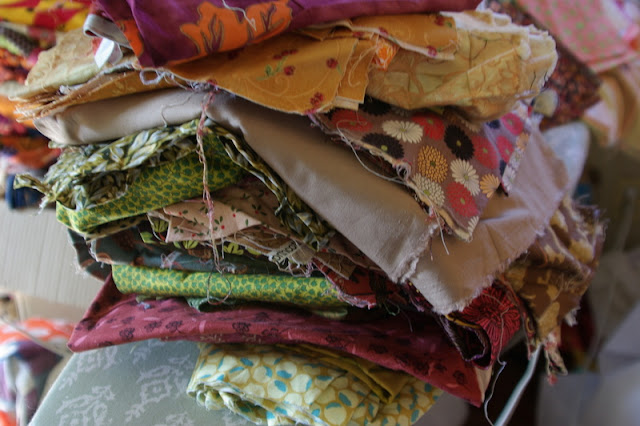 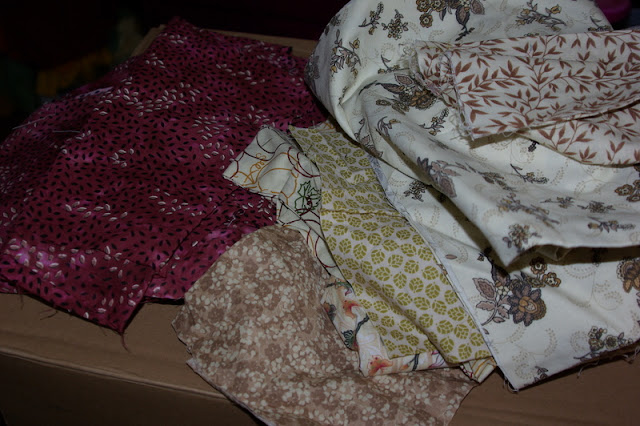 ...and neutrals.  No need any longer to keep them separated by theme. And I have several pieces of that seedy looking brown fabric I think I can piece together for a backing.

Empty boxes and bins, oh my!
And the UFO list grows.
That was a fun Autumn Adventure!
Now back to my regularly scheduled piecing...

Finished or Not Finished Friday at Alycia Quilts.

My One Monthly Goal (OMG) for November was to make at least one flimsy from the bin of Autumn "stuff".

Cathy! That is an amazing run of quilt tops! Well done!

I call them beautiful! Wonderful inspiration for my autumn-themed tub that will make several charity or comfort quilts.

What you did with bits and pieces is miraculous! Our Devo group calls them "encouragement" quilts. I like that.

That is so awesome! I wish I had that much motivation to clear out some of my scrap bins and bags!

My goodness, who would have thought you had enough spare blocks and bits and pieces to make such a stunning array of quilts. Well done indeed, and these will be going to wrap the recipients in love! I personally dont like the name charity quilts, I call mine donation quilts and have recently found a charity, there's that name again, that I wish to support with donation quilts for children in foster care.

Isn't it great to get stuff cleared out! Lovely, lovely quilts!

Well, I knew when you hadn’t posted all week that you were going for “the big reveal “ very soon. And here it is! I looked at your Autumn scrap bin and thought you might make 6 quilts as long as you were happy to make a couple of smaller ones. But hey, this is Cathy! Small?? So, five it is, all brilliant!

Wow! What a successful way to use scraps and bits. Well done.

There's going to be a lot of very happy recipients when those quilts (and all the others you've shown us) are wrapped around someone! All of those shown today are very pretty, but my favorite is still the one with the garlic knots.
Why don't you take a few days off to rest?! ---"Love"

Woo hoo, what a fantastic collection of tops you have created! And I am super impressed you pieced a scrappy back as well, my brain hurts too much to do this when I have had to use my math to get the front to work! So much autumn loveliness, these are going to keep lots of people warm and brighten their day.

I am impressed as usual. Love all those vibrant colors.

My dear, you are awesome! I'm waiting for you to run out of fabric but you never seem to. Love your blog.

Thoughtful of you to make some twin size quilts. I think people would find them useful if they only have one. You are clever to use and use up these autumn prints to make a group of quilt. It's always nice to be able to move boxes out. Hooray.

You must sew from sun up to sundown! That is an amazing amount of sewing, with such impressive results. Yeah, yeah, I know some were already blocks, but STILL. fun, fun tops!!

Fabulous (and I call them comfort quilts). What a terrific way to empty out a bunch of boxes and use up those orphans etc. to make colorful and soon to be much appreciated quilts.

I know I'm repeating what others have said and I've said it before, too, but you are amazing. I love the leaf fabric in the Happy Blocks quilt and the Snoopy fabric included as part of the back. I like to use the term comfort quilts. Now what overflowing bin(s) will you work on next?
Pat

Love, love, LOVE your Autumn Adventure quilts!! I've got a bag with much the same. YOU are the boss of that bin! :o))

That is truly amazing. Good on you!

Big tubs no longer overflowing and what super interesting quilts.

I love fall colors and you just made some great looking charity quilts with them! Wonderful idea. You make it look so easy, but we all know it takes some very dedicated time to accomplish this much!:)

Fantastic job of whipping through that Autumn bin and making such useful quilts for ones who need a bit of comfort, a win win.

Thanks for showing and telling your thought process as you worked thru your bin. Impressive to have these finished and ready to move on.....

Oh, yeah! These are great! I don't think I can even choose a favorite. All that warm, comforting fall color together on the line. It's like the very best autumn leaves all delicately fell in your yard at once. I'm looking forward to seeing them quilted, one by one, and sent off to do good in the world :)

You are the scrap quilt queen!
So amazing!
Hooray for empty boxes!

What a happy, scrappy, busy week you've had! And thanks for sharing photos of how you sort your "theme" fabric. (Now I'm going to look up Ladies Art Co. to find out their two versions of bear paw blocks.)

What?! Did you just not sleep all week :)

Lovely job on all of them!

Just spotted you used those 4 Crumb maple blocks in the Scrappy backing. Good idea, those two unloved blocks were used after all. Waste not, want not!

Just reread my last comment. Don’t know how the word “two” crept into the second sentence. Just ignore it!

All of these tops are wonderful! So warm, cheerful, and scrappy! (Scrappy quilts are my favorite.) Well done!

And this post just shows the world why YOU are my QUILTY HERO!! I am still amazed....after all the years I've read your blog....by how much you accomplish! I wish I was a "Cathy". Great job!!

WOW WOW WOW! What beautiful tops - and you have such a way with fabric!! yours just turn out so great!

Wow! This is amazing!

These are amazing! Thanks for linking up with Elm Street Quilts One Monthly Goal and congrats on your finish.