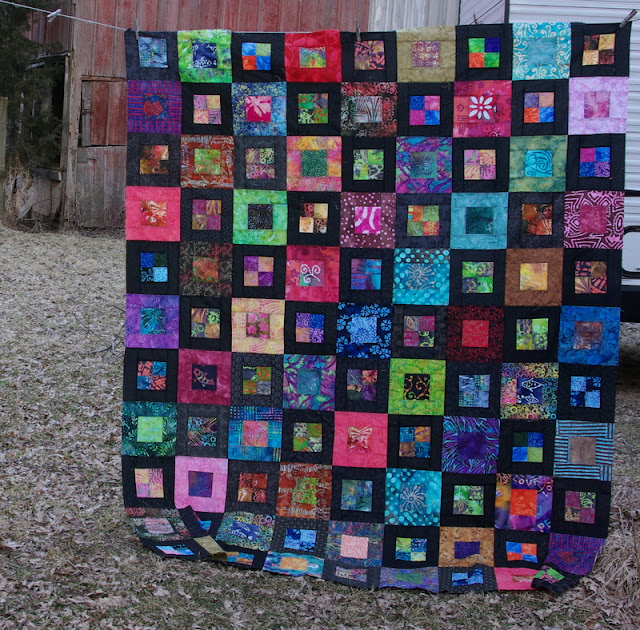 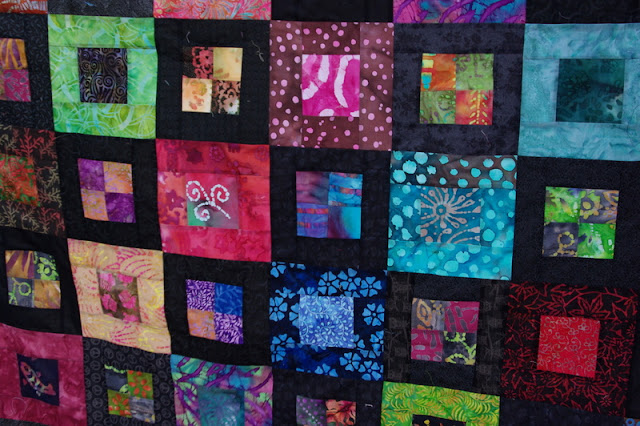 #103 was one of the UFO numbers drawn to work on this month. I had it listed in my spreadsheet as Framed Batik Four Patches - a really really old swap. 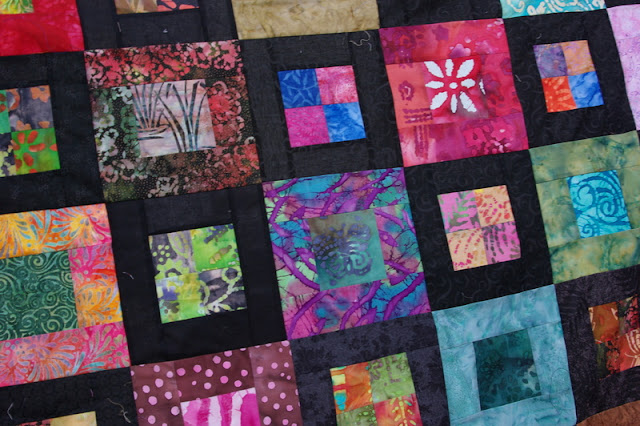 When I went to the project box to see how many blocks I had and what I needed to get the UFO to flimsy stage I found two different blocks in the box - the Framed Four Patches that finish at 8 inches and Batik Happy Blocks that finish at 7.5 inches.

Well, I could have pretended I didn't see those batik Happy Blocks since I didn't have them officially listed as a UFO in my spreadsheet but where is the challenge in that?  I decided to use all the blocks. Yesterday I posted what I'm doing with some of the official UFO #103 blocks - 24 inch Massachusetts blocks that call for 8.5 inch centers and those Framed Four Patches are 8.5 inches unfinished. Perfect!  Or so I thought. In the process of figuring out which Framed Four Patches to use I found that some of them were not all the correct 8.5 inch size. (Remember they were swapped blocks).   I don't really like trimming blocks but I decided I would trim the remaining Framed Four Patches to 8 inches and combine them with the Happy Blocks which were also swapped long ago but all the correct size. 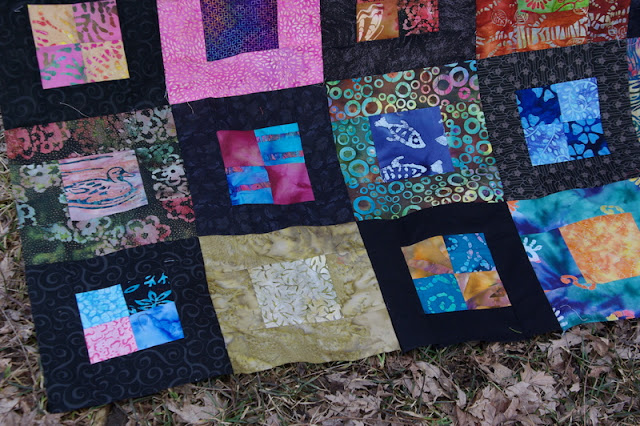 And now I have flimsy #103b for lack of a better name. It's probably going to be gifted or donated so it doesn't really need a name anyway.

I think these swapped blocks were circa 2010 so it's nice to get them out of a project box and into quilts.
Posted by Cathy at Thursday, March 21, 2019

Congrats on clearing out more of your swap blocks. Do you ever sleep? As for a name, how about Batik Bazaar? Sandy at sewhigh.blogspot.com

I really like this quilt - so pretty and wonderful colors

The 4Ps look quite comfortable in mixed company.

You go girl! Another one out of the bins and off the list. :)

Well, it turned out beautifully. I loves me some rich, bright COLOR. And the name 103b is rather cool in a fun, nerdy sort of way; it almost begs to be asked about the name! I hope it stays that way!

Well, you've done it again. Taken a bunch of random blocks and made a beautiful quit from them. I like the dark sashing on the alternate blocks. Really sets them off. Another idea for my mountain of batiks, not that I need more ideas. Currently working on a baby quilt using your Happy Block concept and I Spy type centers.
Pat

Those batiks really show up nice next to the blacks. So that's how you decide what to work on ~ from looking at a spreadsheet? I have many lists of WIPS and UFOs, but it's not very inspiring looking at a piece of paper. I need to see fabric!

It is a very striking flimsy, and will be another beautiful quilt! ---"Love"

And done is good;) I see some fabric in your quilt that are in my stash,

Wow - those played beautifully together. The deep tones are gorgeous.