A Finish! Sunshine on a Cloudy Day 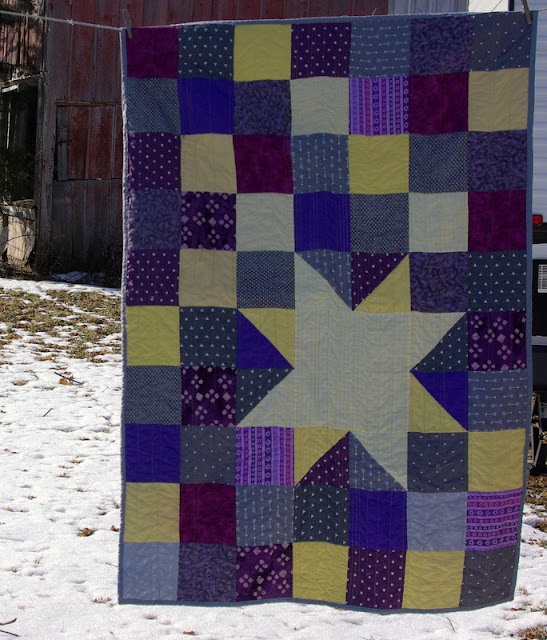 Sunshine on a Cloudy Day
42 x 60
It's a finish ready for giving or gifting!

I took advantage of yesterday's warmer temperatures that melted most of the recent snow and ice to take pictures outside. And today it is about 45 degrees F colder!!!

I modified a free Katie Blakelsey (Swim Bike Quilt) pattern she calls Star Bright.  I used 6.5 inch squares instead of 6 inch and I made the HST star points my own way.

I have a milk crate of "chunk scraps" (scraps greater than 6 inch width of fabric and less than a fat quarter) and picked out some yellow, gray, and purple scraps to use. I've always wanted to try that color scheme. 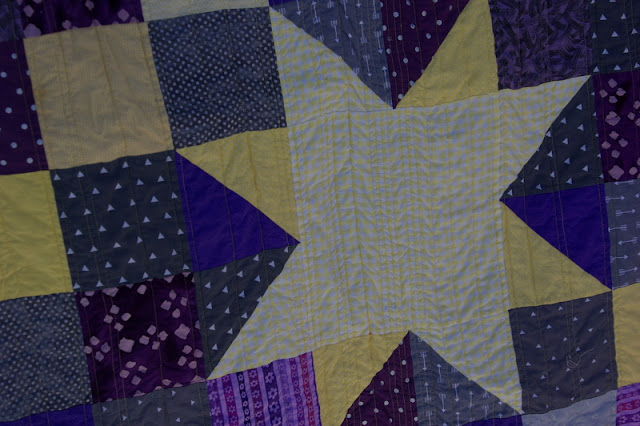 My main machine quit sewing again and is in for repairs. I'm thankful I have a backup machine to use in the meantime.  I just quilted some straight lines at irregular intervals but sure had a lot of thread breakage which left me with lots of knots to bury because sometimes I don't see well enough to match up the end and beginning of the lines.  And, of course, the sewing machine light had to burn out in the middle of quilting which did not help.  I also think this sewing machine does not like cross wound thread. Even with a walking foot I had some shirring mostly at the same spot where I had most of the broken threads - of course that was right in the middle of the yellow gingham star. 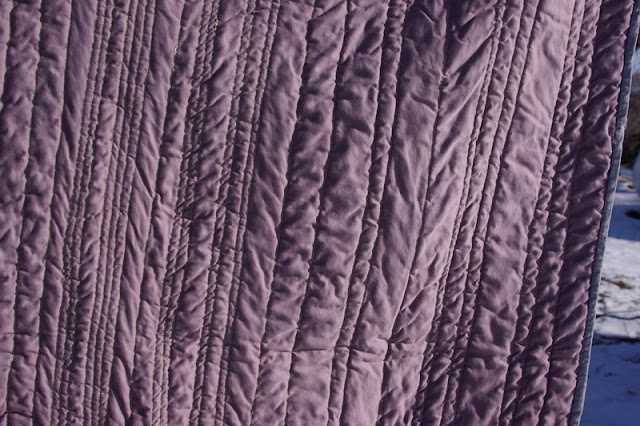 I used a very soft sheet on the back and I think the front shrunk more than the back which caused all this shirring after the quilt was washed because it wasn't there before washing!  I've used sheets lots of times for backings but I've never done straight line quilting on those. Maybe it's because I did not have front and back lined up on the straight of grain? And maybe that's why I had thread breakage problems in places?  Well, it doesn't affect the comfort or warmth of the quilt. That sheet is soft!

On to the next!

This was my goal #15
for
Q1 Finish-Along

Peacock Party at Wendy's Quilts and More
Posted by Cathy at Friday, February 15, 2019

It looks great. When you use sheets for the back, do you only use Cotton? I'm having a hard time finding cotton sheets.
xx, Carol

Most thread breakage comes from having 'drag' on the quilt when it's not supported enough. It pulls on the needle and the thread breaks. Shirring can occur for the same reason. Just a thought...

This is lovely. I like that colour scheme too!
I've had thread breaks when the thread coming off the horizontal thread pin gets hooked on the rim of the spool. It shouldn't, but sometimes the spool is a little rough around the edges, and the drag on the spool overrides the machine's tension. Then I use the vertical pin.

Great color combo! Frustrating to have so many thread issues, but it looks warm, cuddly and inviting. I guess saying "It will all come out in the wash" isn't quite right for this one? :)

Love that big star. Your chosen colours are great.

I love all the great dotsy prints you've combined - all the stars in the sky!
I don't have enough experience with machine-quilting to have any useful advice. In my (limited) experience, some quilts just resist being quilted. Who knows why?

Another wonderful Donation Quilt to add to your collection!!

It certainly looks like you need sunshine on that very cold day! This quilt will certainly make someone happy. Thank you for linking up to the Peacock Party.