Holey Moley! It's a Finish! 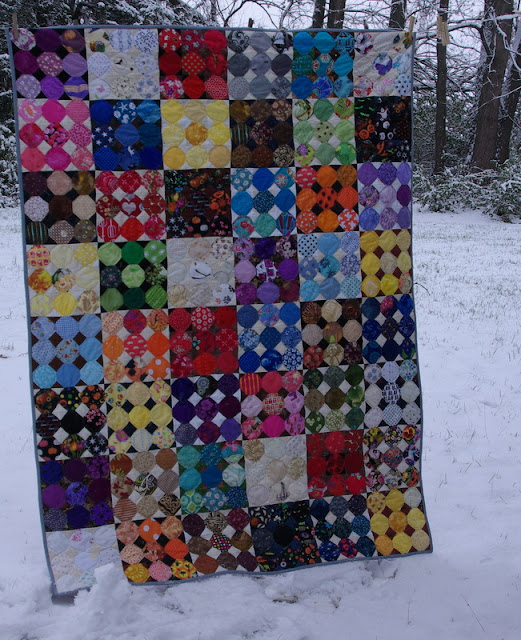 I'm calling it Holey Moley because after I put the top together I lamented that the white on white Snowball blocks made it look like the quilt had big holes in it. 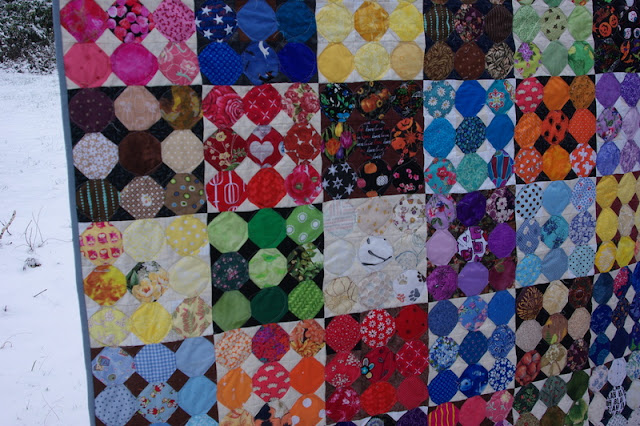 I usually don't use a design wall or floor or bed and just sew blocks together randomly -- just like grandma used to do.  Let the scraps fall as they may!  In 2017 when I made light cornered Snowballs I must have had a lot of light/neutral scraps. Now that the quilt is all finished it doesn't look so "holey", thank goodness. 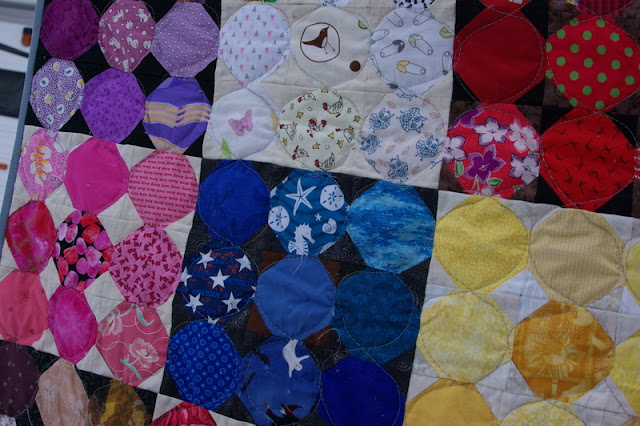 This was a Rainbow Scrap Challenge (RSC)  project started in 2017.  I used scraps from the 3.5 inch scrap bin to make the Snowballs.  In 2017 I used whatever was in the scrap bin in the RSC color of the month to make Snowballs with light corners.  This year I made Snowballs with dark corners. I fully intended at the end of this year to just mix up all the Snowballs and sew them together alternating dark and light corners. But somewhere along the line this year I decided to make nine patch blocks instead. 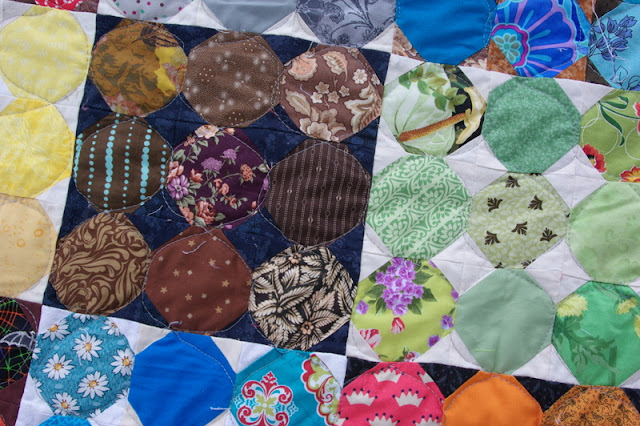 Quilting...
I pieced together about eight batting scraps. Then I couldn't figure out the color of thread to use or how to quilt it. I tried a couple of different things and ended up with skipped stitches and a seam ripper and cuss words.  I love hand quilting but most of the time I don't consider machine quilting on my DSM a lot of fun.  Finally I changed to a microtex needle after trying a topstitch and quilting needle. That fixed the skipped stitches.  I decided on gray thread since that seemed to blend and I had enough of it on hand.  And I decided I would just relax, take it easy and breathe and try to have a little fun and not be so uptight.  It's a comfort quilt...it just needs to be comforting.

I made the Snowballs stand out by doing a liberated- wonky- free motion quilted- figure eight around the Snowballs.  And that was kind of fun. Snowballs, after all, aren't all the same perfectly round shape. 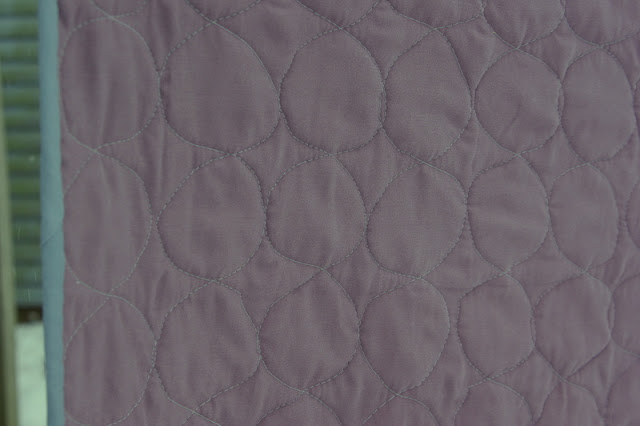 I used a nice soft eggplant colored sheet for the back and I had just enough of that gray solid to use for binding. 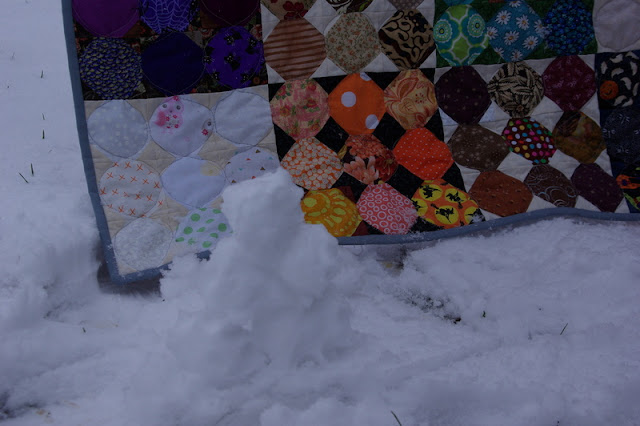 I finished Holey Moley last night and funny thing...when I woke up this morning it was snowing.  The snow is perfect for making snowballs. I may have to go out later and build a snowman - my exercise for the day.

Scraps always make the best quilts. I really like how you grouped your blocks into a nine patch. Great finish!

Has it really been going since 2017? Seems like you started this only yesterday!
Happy snowman building! (We got a big dump of snow on Thursday and I realized how Not Ready I am for winter...)

Love those snowballs--especially the white ones--but then, I always do march to a different drummer...nice finish! hugs, Julierose

Congrats! on another wonderful RSC finish!!! I'm not sure that I would ever have thought to create 9-Patch blocks with the Snowballs. It made for a really cute quilt!

What a fun finish! It is so much fun to see those long term projects finally coming together. The quilting is just right!

Deciding to join your snowballs into 9 patch blocks was a brilliant idea. They look great and make so much more of an impact than the individual snowballs would have done. Alternating neutral and dark corners worked wonderfully well too. A super RSC finish and yet another design for my Must Make list.

Holey-Moley done just in time to make a colorful debut in your snowy yard - perfect! I nearly always use a microtex 70/10 needle in my DSM for quilting, except with a flannel backing I'll switch back to a universal 80/12. I've also tried the quilting needles and topstitch, and neither works well for me, for whatever reason.

I like the 9 patch snowball layout! Looks like a great way to manage the smaller blocks for a quick finish. I'm glad the quilting worked out, too!

What a great scrap quilt! Love it and will be tempted to do the same, if I ever get square scraps bigger then 2.5", for some reason I seem to be in a 2.5" vortex, but one day I will get there!

Your quilt is charming. Well done.

I like the holey look! Almost like a giant lace pattern in bright rainbow colors. Fun quilt in every way :)

This is quite a surprising quilt! I thought it was more appliqued circles. I would never have thought that those snowball blocks would join together to make such a cohesive quilt. I think this just moved to the top of my list for a RSC quilt for the new year.

It's fantastic... so fun! I love how you build quilts... you are so inspiring!
I waste so much time worrying about the layout and whether I have it "right".
I want to be more like you :)

Holey Snowballs, Cat-woman! That quilt rocks! I love your groupings of nine by color. I think there’s a snowball and nine-patch quilt on my short list for RSC2019.

I love scrap quilts. The snowballs are perfect. The irregular machine quilting looks great. Nice picture in the snow!

It's lovely. I love the way you alternated the background colours in the final layout.

I love everything about this quilt! I especially love the light and dark 9-patch layout. The quilting is fabulous. I too love to use a nice sheet in the back once in a while. Party in the front, business in the back. LOVE the binding. Beautifully done...and fun from the scrap bin. Such an inspiration for the RSC18.

Always love seeing another scrap quilt-congrats on the finish!

Terrific name, and fun fun fun all the way around.

Such a fun quilt with a great name. I think the quilting on it is perfect.

Great finish! I love the backing, too, and let's hear it for getting those scraps used up!

Perfect! Snowball quilt in the snow on your clothes line. It doesn't get any better than that!
Thanks for the microtex tip for quilting.

Super scrap quilt and a perfect shot of it with the snow as the background.

Scrappy makes my heart sing! On behalf of the FAL crew, thanks for linking up!