WIPs to UFOs to WIPs Again 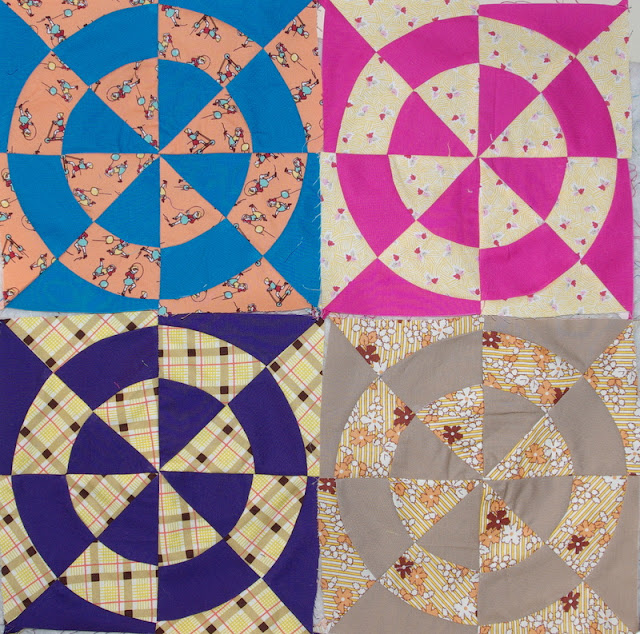 I have several boxes and bins of UFOs. They are UFOs for a variety of reasons.  Periodically I dig through to see if there's anything I feel like actually finishing.  I feel like finishing Wagon Wheels so made four this week and moved them out of the UFO box and into their own project box.  That makes 16 blocks total now out of 63 required. 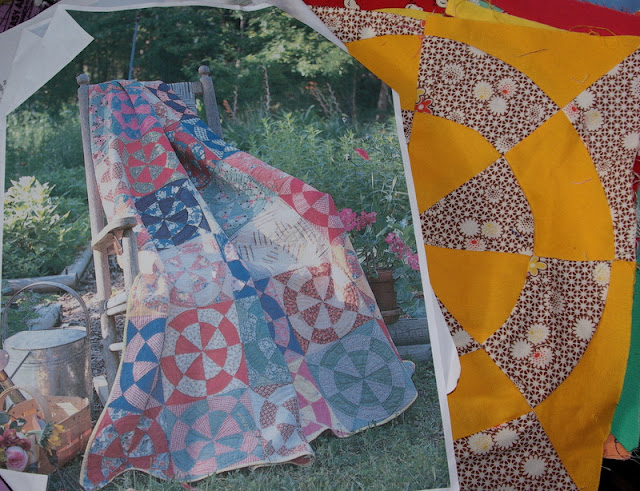 I started these nine inch Wagon Wheel blocks in July 2013 and worked on them a little in 2015.  The pattern is from a McCall's DVD I think I've misplaced now so good thing the instructions and templates were with the blocks.  I found these difficult to make when I started them. But since then I've made a lot of quilts with curves so they seem pretty easy to make now as long as I remember to cut the pieces correctly.

Actually this is a smaller block version of an Anna Maria Horner pattern called Spinning Stars that I made in 2015 and called Petunias and the quilt I have in flimsy stage called Salsa Dancing. 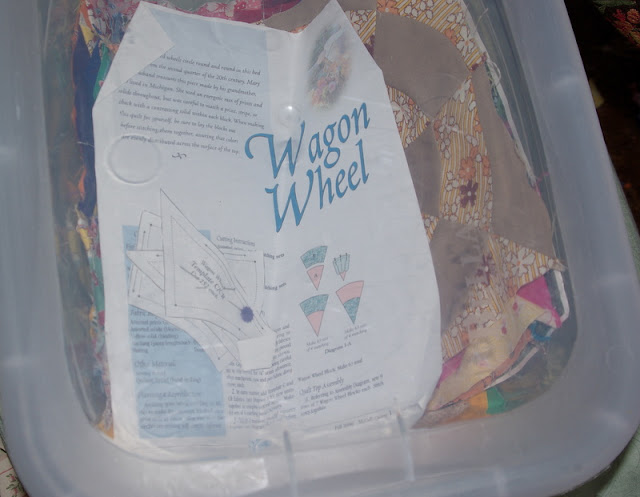 Now that it is in it's own project box and out where I can see it I hope to make a few blocks each week out of 30s reproduction fabrics and solids although I don't have many solids to choose from. 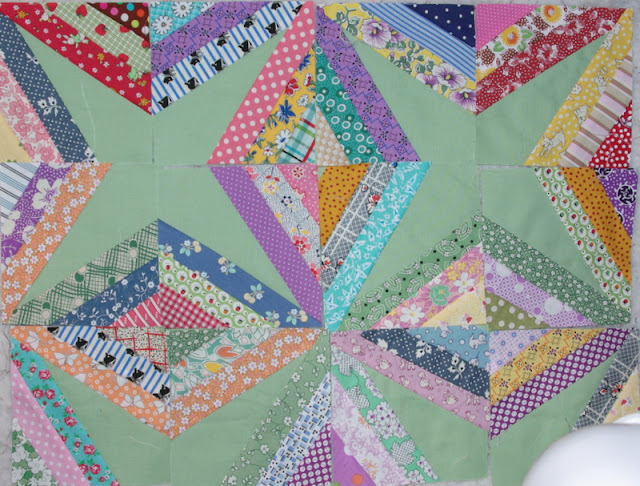 And speaking of 30s reproductions...this is another UFO that recently got it's own project box - little five inch string blocks.  It looks like I started these in 2014 to use my 1.5 inch 30s reproduction scraps.  The reason this became a UFO is because I ran low on scraps and didn't want to cut any fabric specifically for these String Stars.  The stars are Kona Spring and I had a piece of it folded around the blocks I had made. The Kona Spring reminds me of the green Grandma used in her quilts in the 30s so that's why I picked that color.  I used a tutorial at the Molly Flanders blog. 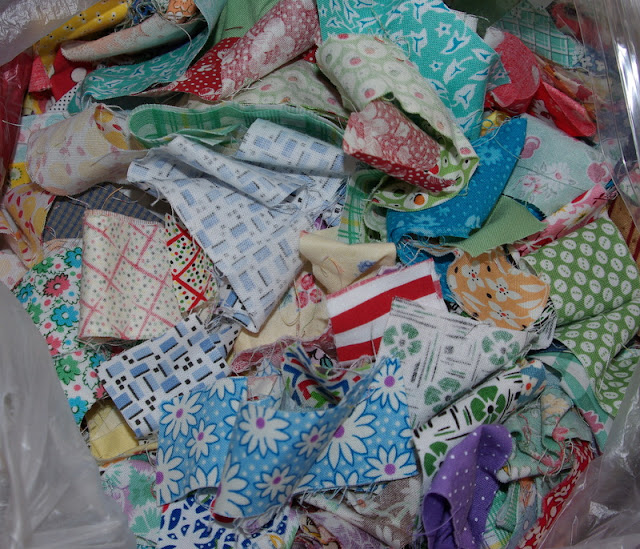 Over the years I've been accumulating 1.5 inch 30s scraps for this project.

I've been working on about ten blocks a day. I have all the foundation squares cut and I'll be darned if that piece of Kona was exactly enough fabric to give me the size quilt I want. Weird since I didn't really know what size quilt I was making until I recently dug out this UFO. 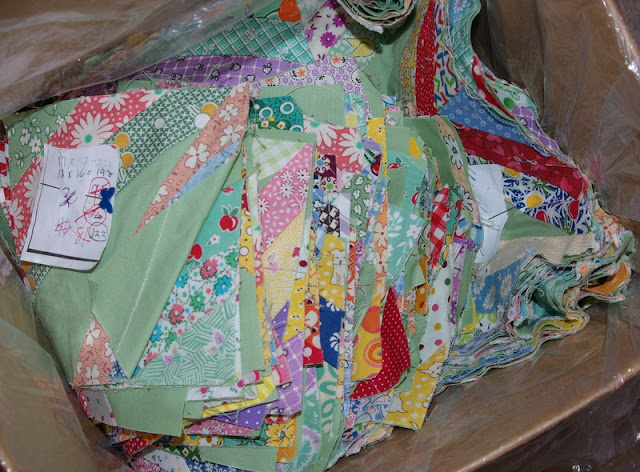 Now this UFO turned WIP has a project box all to itself too. 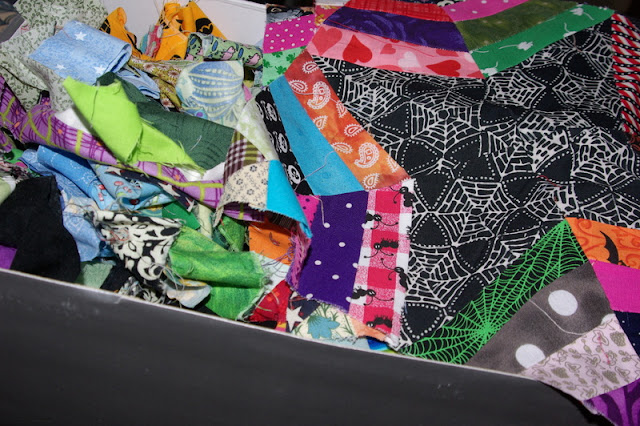 After I'm finished with those 1.5 inch 30s scraps they will go into the project box with the general population of 1.5 inch scraps I've been accumulating to move forward on my Spider Web quilt using the tutorial at Quiltville.  I previously used the Quiltville tutorial to make a Spider Web quilt in 2012. That one used different sized strings.
Posted by Cathy at Tuesday, November 20, 2018

Lovely quilts and patterns hugs for a Happy Thanksgiving to you and yours...
from me and mine lol Julierose

Oh my - ssooooo much scrappy wonderful-ness in this post!!!

Oh oh oh! So much gorgeousness!
Your Wagon Wheels are kaleidoscopes in disguise!
And there you go tempting me with strings again...

Love all your 'wagon wheel' quilts, I popped back to see your earlier makes too! All this scrappy goodness is inspiring!

I love scrappy string quilts and looks like to lots all ready to go!

Glad you have moved two of your UFOs into project boxes and are busy working in them again. Coincidentally I've been working on a Spider web UFO and am now sewing down the binding.

Your quilts are always so awesome full of wonderful scraps! Hard to beat! The green looks great in that string quilt!

That green is so classic to use as a background for 30s fabrics! Very springy and lovely :)

I think it is good to let the UFOs out and get some air. You have a lot of lovelies to choose from and move forward.

Such colorful work you have.

Wow, you have a lot of UFO's. I love the vintage style fabrics you use.All the blocks look beautiful. Can't wait to see them turn into finished quilts!!

I see the similarities between your wagon wheels and the other quilts but really like the curved piecing here. We don’t do enough of it. I guess it’s just easier to rotary cut our pieces when they are straight. This will be a delight.
And that green is a perfection for a 30s reproduction. Another beauty on its way. You are so clever and busy, Cathy.

I love all these scrappy projects, especially your String Stars! You were so lucky you had enough green fabric. How often does that happen? Thanks for the link to the tutorial. I see one of these in my future.