Stackin' and Whackin'; Slicin' and Dicin' 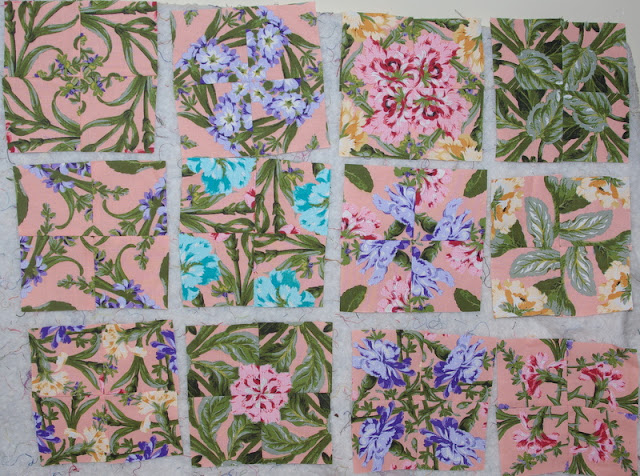 I recently dug out one of my oldest UFOs to work on - Four Patch Posies.  The UFO must be pre-2009 because I can't find any mention of it on my blog. 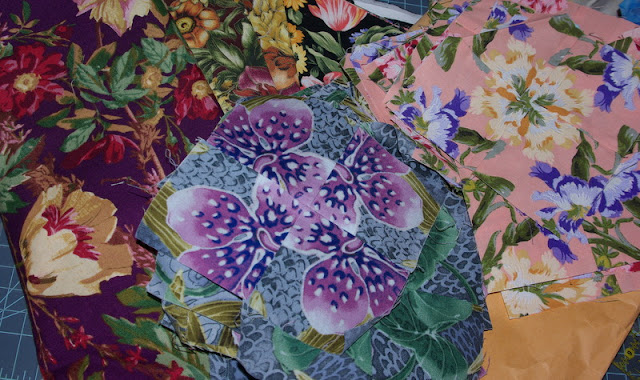 In a large manila envelope I found 30 blocks made from a green, gray, purple floral. I also found 18 blocks in that floral with the pink background plus a stack of more of that floral all pinned together ready for cutting. Also in the envelope were pieces of several other fabrics I guess I was going to use to make some posies.    I managed to make 29 more blocks with that pink background. 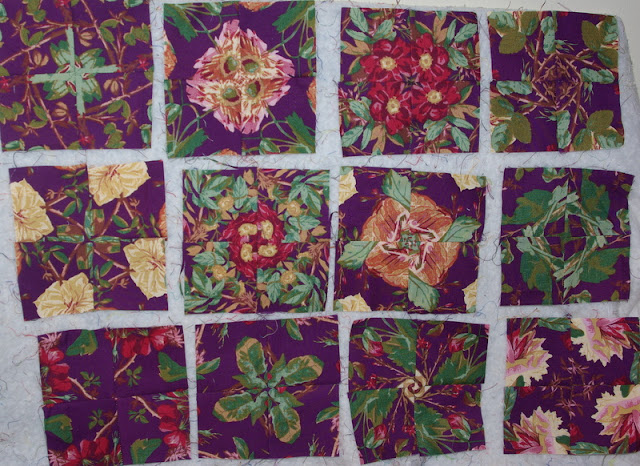 I had enough of one of the fabrics for four repeats so made 42 more blocks. These are made of 3 inch pieces for a 5 inch finished block. 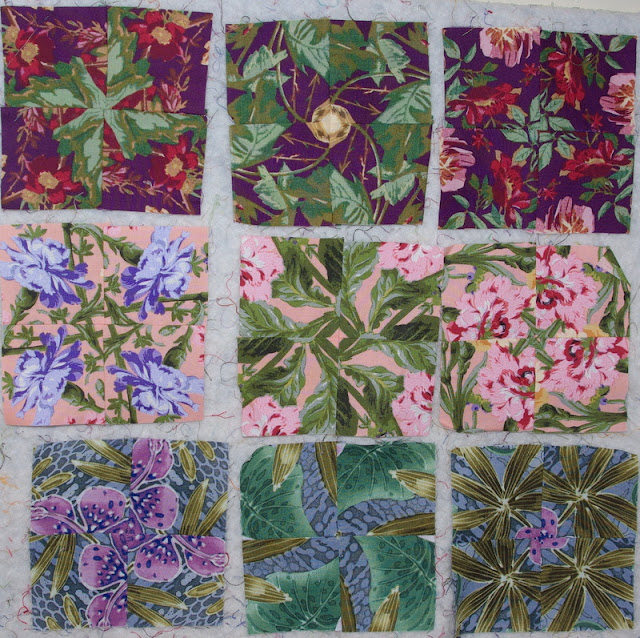 I ended up with a total of 119 posies from three different fabrics. I'm hoping I counted incorrectly and there is actually one more hidden in those piles for a total of 120 blocks. Then I can have a layout of 10 x 12 (50 x 60 inches) which is a respectable size. There were four repeats of a floral with a black background in that manila envelope but I'm not going to cut that up. Maybe I'll just use it on the back.   Now I have to decide how to put these together. I usually sew blocks together randomly but I'm thinking this one might take some planning. I'm even thinking a very thin dark green sashing might be nice.   Anyway...I moved this oldie forward and had some fun doing it.

And then I was in Whacky mode and felt like slicing up more fabric. 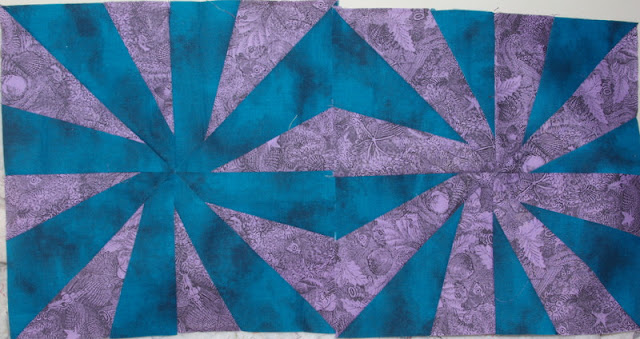 These blocks finish at 14 inches.  The free tutorial for Twirla can be found at Butterfly Threads.  (I'll call mine Twirl and Whirl or something like that instead of Twirla because Twirla also happens to be the name of a contraceptive patch). 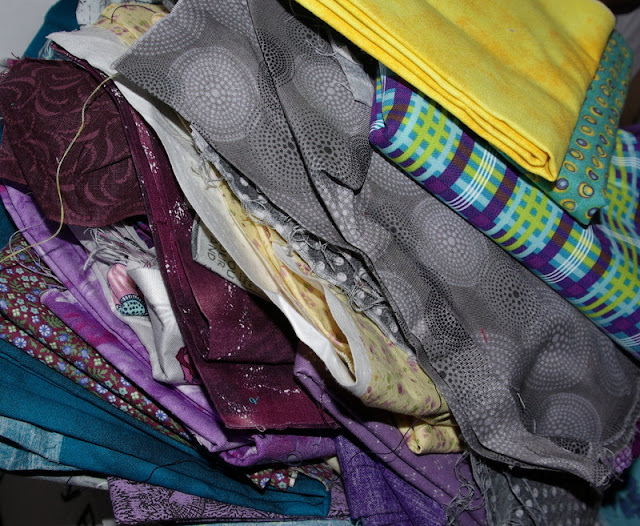 I was first thinking I would make it with some scrap chunks of gray, purple and yellow but found I didn't really have many yellows so also added in some aqua. 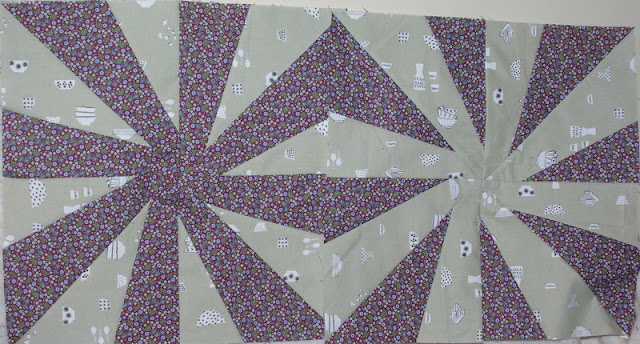 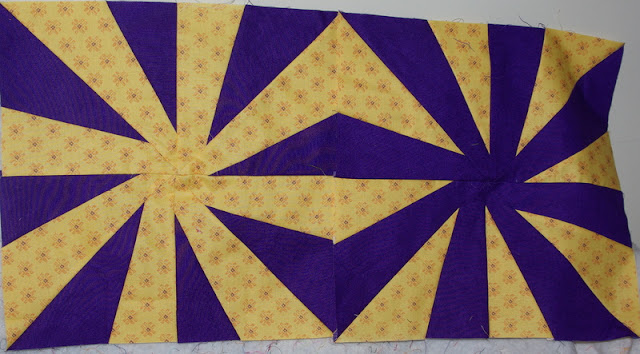 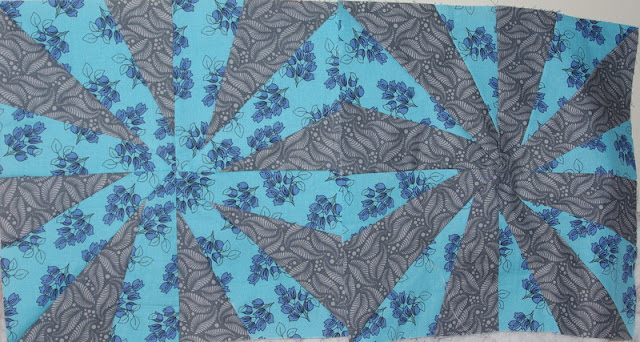 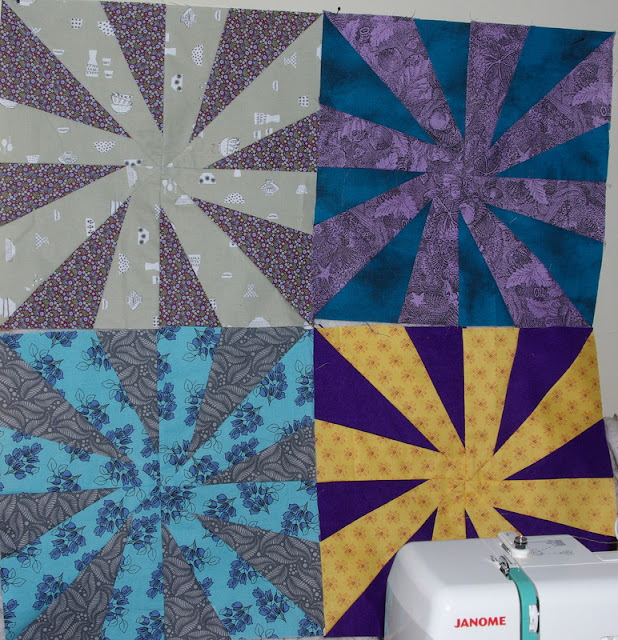 In no time at all I had eight blocks.   And then I was bored with that but still felt like whacking away at more fabric so... 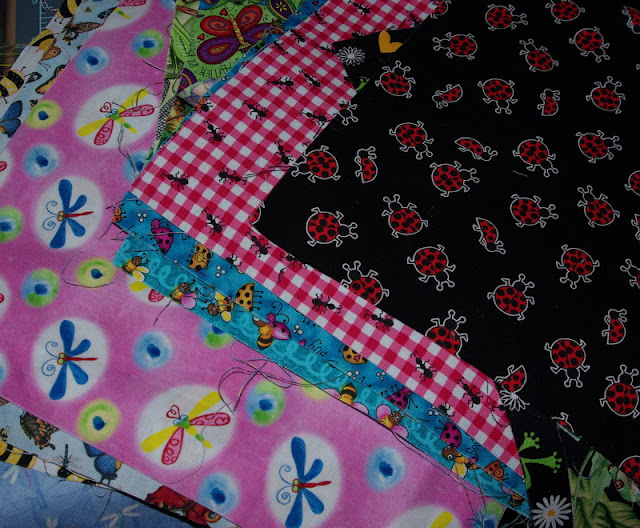 ...I broke open a package of I Spy Bugs/ Critters that someone gifted me last year. I don't buy precuts myself but I think this is a layer cake? Package had several 10 inch pieces. 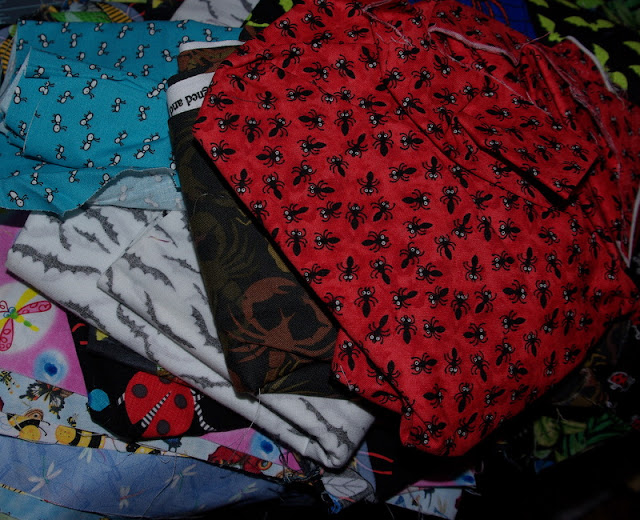 And I have a few bugs myself. 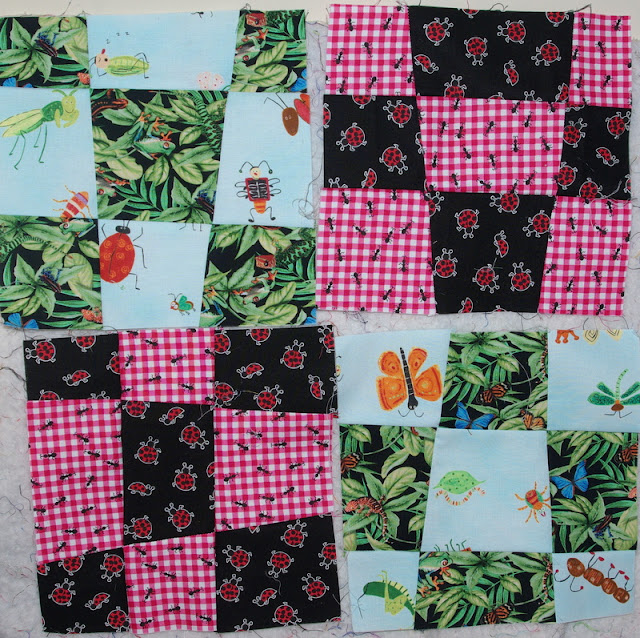 I made some stack and shuffle nine patches that finish at about 8 inches or so. 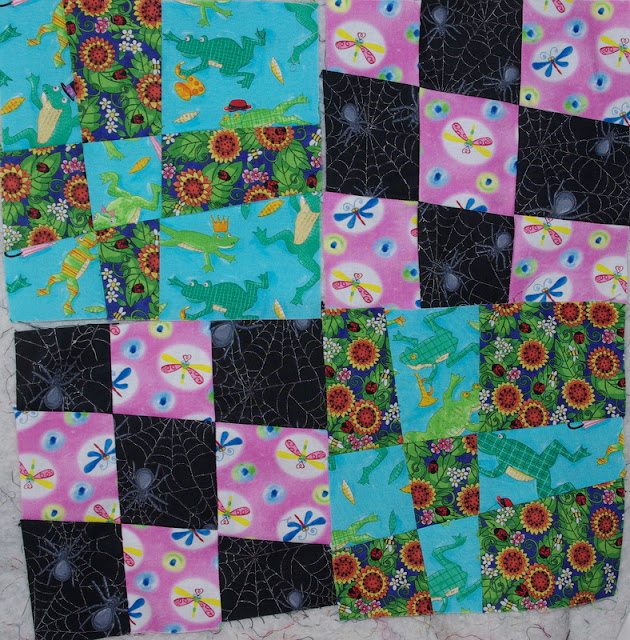 I used the method similar to what I had bookmarked at Zippity Quilts only I used larger sized squares.   And then... 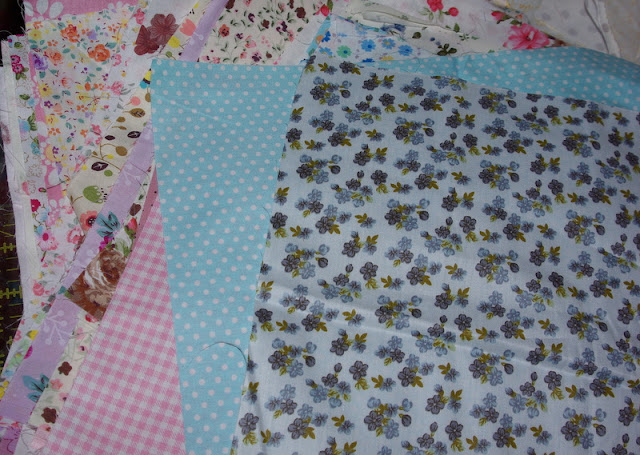 ...I remembered another package of floral 11.5 inch squares I was gifted a couple of years ago. 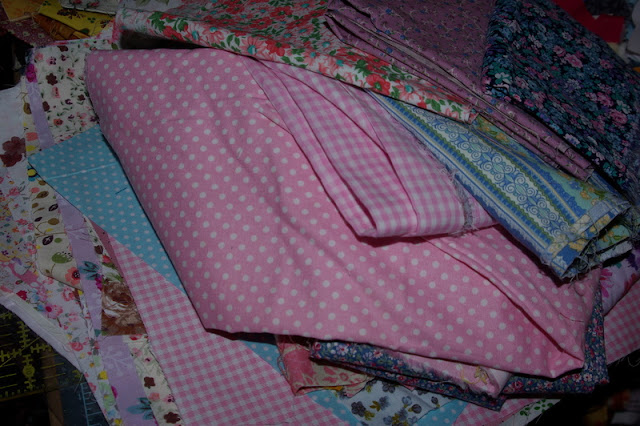 And I found some stash I could add to the mix because I decided I would like to make a twin sized donation quilt. 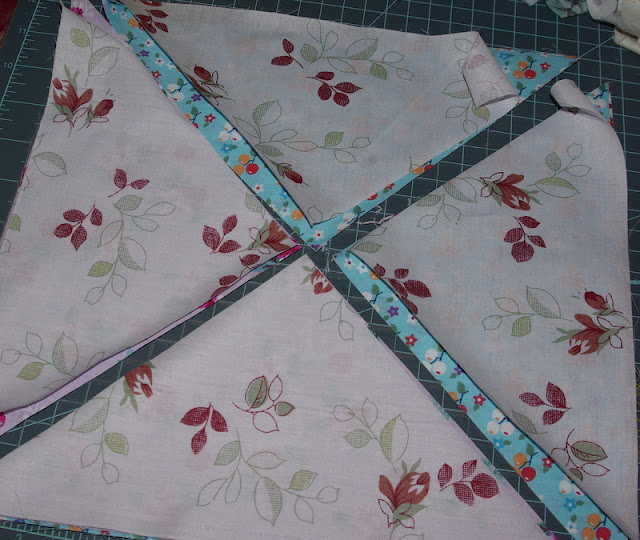 These I am stacking and slicing on the diagonals... 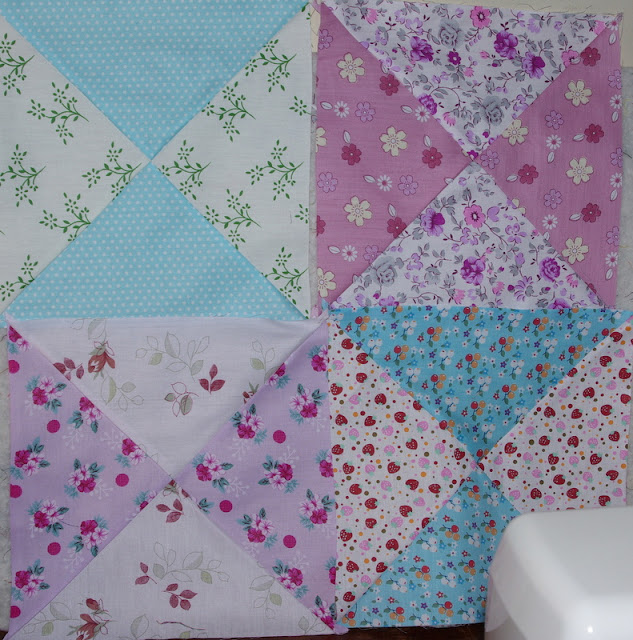 ...and they are being made into Hourglass blocks that finish at around 10 inches or so.

Well, I can't seem to work on one thing at a time but I'm not putting any of these away as a UFO until I get them to flimsy stage so I expect to have four flimsies to show soon if I work on them all a little each day.

Oh Scrap! at Quilting is More Fun than Housework
Posted by Cathy at Sunday, April 26, 2020

nice collection of blocks...all will be winners!

Goodness me, you have been busy! Four lovely flimsies to look forward to viewing on your blog.

I'm new to your blog and enjoy it a lot and impressed by your fabric stash. Love your ideas. thanks for sharing.

I am also new to your blog and I enjoy seeing your creative use of blocks and fabric. You have a gift, keep using it!

All of this is so much fun! I love seeing all the projects you're working on.

The 4-patch Stack and Whack is one of my very favorite patterns, and the fabrics you used made beautiful blocks! I absolutely love the surprise in every block when I start stitching the four pieces together! I've got to find time to make at least one more of those! Have a fun time with yours. ---"Love"

Ugh!! Did you HAVE to dig out one of my own UFOs?!?! I have an abandoned 4-Patch Posy quilt, too. Next, you pulled out the very project that attempted to lure me away from my niece's baby quilt. Then, you pulled out an old stand by in that Wonky 9-Patch project! Have you been spying in my studio window?!?! Have fun putting those quilt tops together!

You have been busy! Great blocks - keep on stacking and whacking and slicing.

Thanks for linking up with Oh Scrap!

Oh my! Look at you go! (Meanwhile, I'm having trouble motivating myself to haul my butt up to the sewing machine...)
I always love to see what you're up to! Please carry on!

I've mad a couple of four patch posie quilts and actually have some leftover blocks somewhere. They're so much easier to put together than the regular stack 'n' whack hexigon shapes. I think I;ve also still got some floral I intended to make more four patch posies. Well, they'll just have to wait in line. You've certainly been making good use of your stay at home time.
Pat

Wow! I could never keep up with you!
I didn't know about Twirla...thanks for that tidbit of trivia. Ha, ha!
I really want to see what you do with the posie blocks! :)

I've never seen the four patch stack-n-whack blocks before. They must have been the "in" thing before I started quilting in 2014. That will be a really beautiful quilt with a dark green sashing. Lots of whacking going on at your house this week! :)

I love the stack and whack blocks! If you don't find another block to have 120, you could just alternate them with 5" dark green or black squares since they're small and that would come out to a 14 x 17 grid. That would make a bed size quilt but they're soooo pretty that I just put a stack and whack quilt on my list.

Wow - that looks like lots of fun! It also reminds me of a disappearing 4 patch I made that still needs borders. Have you ever made a disappearing type quilt?

It must be so satisfying to advance an old UFO like that, good work! Now onto deciding the final setting. The posies are going to be such a pretty quilt.

So many lovely quilts in progress. One good thing about stack and whack is that there aren't leftover scraps. Yay. With so many projects I often wonder how you dig yourself out at the end of the day. You are always so prolific and clever. Congrats.

What did you think of that Twirla / Whirla pattern? Their centers look nice and flat. My version will likely be a planned color scheme, although I am rethinking using a brighter teal as a background rather than brown. I like your stack and whack combos. Sandy at sewhigh.blogspot.com