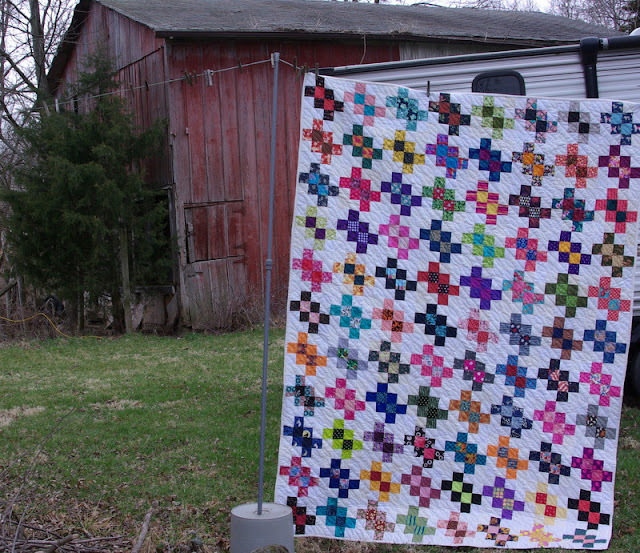 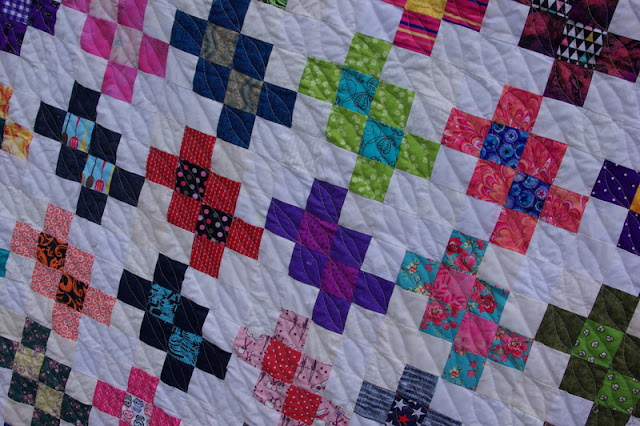 The traditional block name is Arrowhead Puzzle.  Bonnie Hunter made an eight inch version of the block popular and called it Garlic Knot. 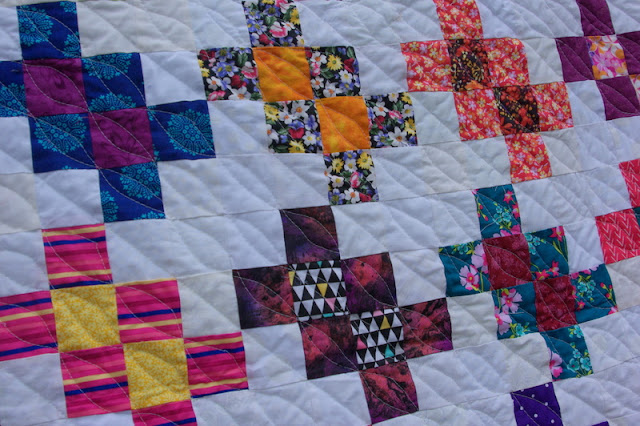 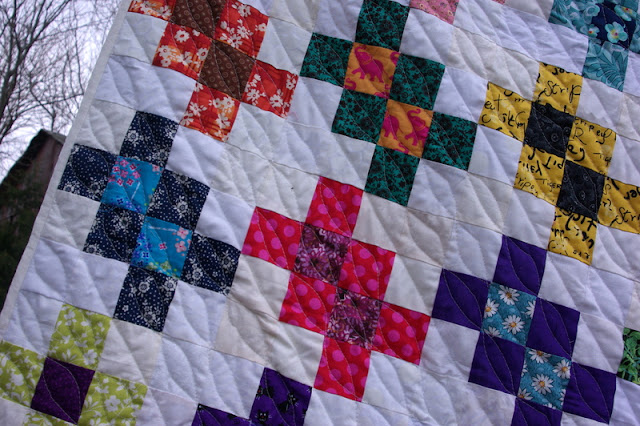 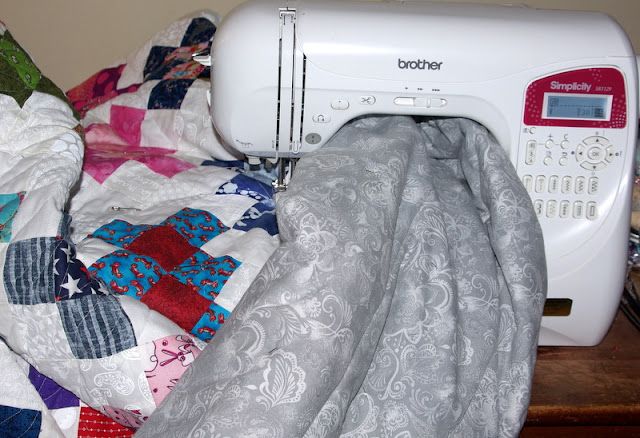 You know it's not easy to wrangle a quilt this size through the 7.5 inch throat on my sewing machine but it is not impossible. 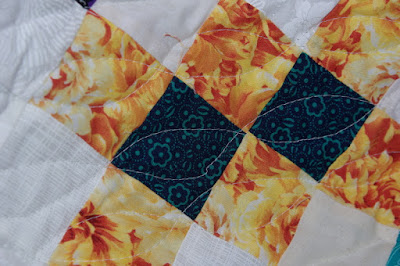 One of Murphy's Laws of quilting states that if you are going to accidentally zig or zag while wrangling large quilts it will be a zig with light thread in a dark space or a zag with dark thread in a light space. 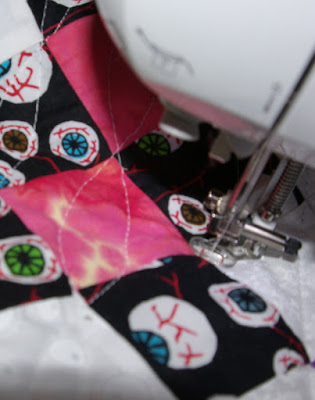 But if anyone is eyeballing a quilt for things like that and they aren't the quilt police then I say they have too much time on their hands.  After a good wash those things almost disappear and a recipient will never notice. 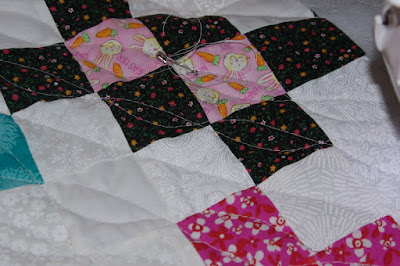 As I quilt I always have to put a pin where I need to bury knots. If I don't then I miss some places later on when I have a knot burying ritual. 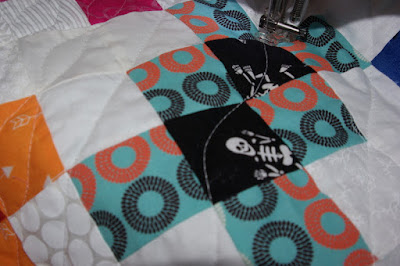 I take a long break after every bobbin is emptied in order to move around these old bones.

Oh...one last tip...if you have long hair be sure to wear it in a bun when quilt wrangling otherwise it might accidentally fall in front of the needle and get sewn into the quilt. 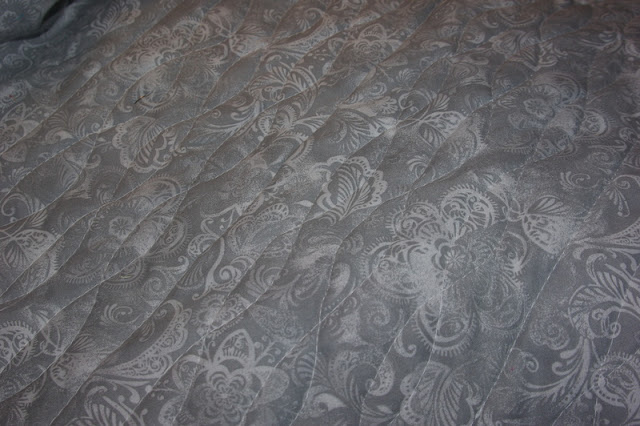 The backing came from a friend. 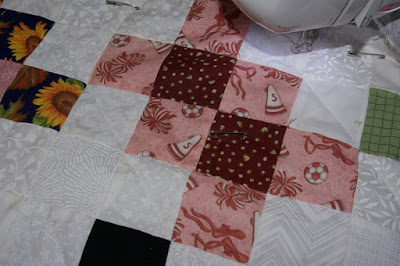 Finished or Not Finished Friday at Alycia Quilts

Very nice, and someone is going going to love that one! The back is really special too! ---"Love"

You're absolutely right, all those little zigs we notice while the quilt is right under our nose (or hair, lol) will never be noticed when the quilt is finished. It's a very lovely quilt.

Well at least we all know one quilter who hasn't let her productivity slip. Three cheers for another well done finish. And I like pea soup, both the food and the quilt top from your last post. I'm not sure why I can't get caught up on my blog reading when I have nothing else to do.
Pat

Lovely finish--now hmmm should i ask how you knew about long hair getting sewn into a quilt?? ;0000
I tie mine up in a pony tail whenever I sew on La Machine...just in case...
What a lovely donation quilt--someone will be thrilled...
~ ~ ~ waving in the rain (after washing my hands of course)
Julierose ;)))

you are amazing, one of my fave quilters to follow, and I love the scrappy magic you make out of seemingly disparate elements of cloth. Can't wait to see your new rose fabric one done, too...congrats on another great finish!

Nice and colourful, it be be a most cherished donation quilt, I'm sure.

I like it! I also wondered how you learned about tying long hair up out of the way when quilting. ;-)

That was quite an accomplishment to get that quilted on such a small throat space. I am again impressed with everything you do!

I feel your light-thread-zigging-on-dark-fabric pain! Happens every time. Love the term "lemon peels," too. Or maybe they are garlic peels? Terrific quilt, lots of controlled scrappy goodness :)

What a great quilt. Love all the different colours and combinations of fabrics. A real scrap quilt which will be a lovely donation gift. I’m amazed how you quilted this on your sewing machine.

That is so true about wobbles and zigs and zags showing in the most noticeable places possible. But like you, I don’t really care. I’ve been waiting for red or yellow to come up in the RSC to finish up my garlic knots quilt. But I’m going to sew them this month for assembly in May.. Your quilt is, as always, so lovely!

Love that block! Quilt looks great! Anyone who cares about wiggles and wobbles better stay FAR away from anything I've quilted! :) I think this looks fantastic!

Another fabulous finish! Love the diagonal peel quilting design!
And amazing feat considering the harp size on your machine!
Thanks for the inspiration!

Very nice finish!This is on my list for some day......

That's a great pattern, and a great finish.

Congratulations on this beautiful finish. I have to admit that the blocks themselves weren't moving me much but together I feel differently about it. I really like your rendition of this one. I hear your pain of quilting such a big quilt on a DSM. I struggled for a long time with one made out completely of flannel. Glad it is now done. ;^)

I love those blocks, and your quilting looks great to me! Washing and drying will definitely squish it all up and you'll never notice the bobbles. Great finish!

That is a great finish! I like how all the colors are shining because of that background!

Great finish! Love how colorful it is.

Hip! Hip! Hooray! Great finish! The quilting is wonderful. I too quilt on my older domestic sewing machine with only a small throat. Loved the tip about the pulling the hair back ... so far (fingers crossed) that hasn't happened to me.

Hip hip hooray!
I hear you on the curse of the zigzags. Fear of zigzags makes me twitchy. Which causes zigzags...

Love Garlic Knot quilts and this one is no exception. The backing is perfect too. I don't know how you quilt on your DSM without tearing your hair out - oh wait, your hair is already sewn into the quilt!

Such a fun version of Garlic Knots. Or Arrowhead. Or whatever....And the weathered red barn is a great backdrop.

Hey, Cathy - that pattern looks familiar - oh yes, it's also a quilt top on MY design floor! Great job, good to see yours is to the quilting stage - So nice to find another version - wasn't it fun?