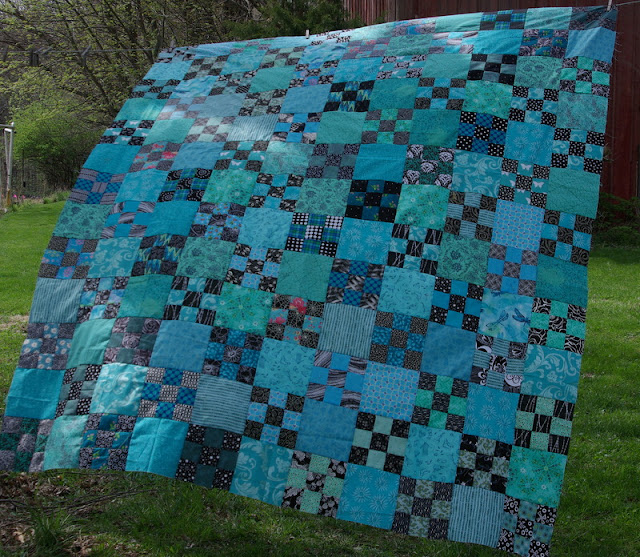 This month the Rainbow Scrap Challenge color was aqua.  I found I had very few aqua scraps except for several chunks - scraps greater than 4.5 inches and less than a fat quarter. 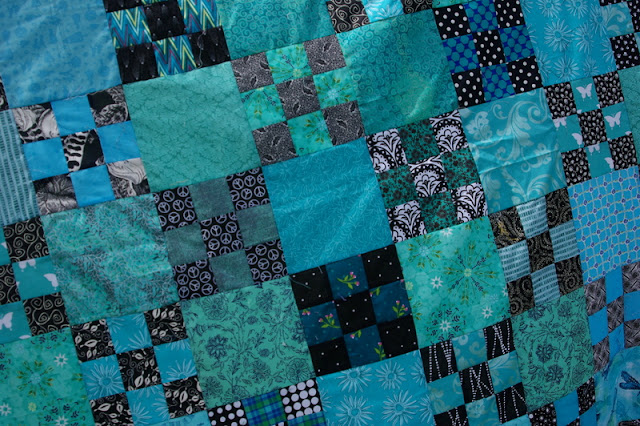 I also had a small shoe box of 2.5 inch half width of fabric black and white strips from a swap long ago. 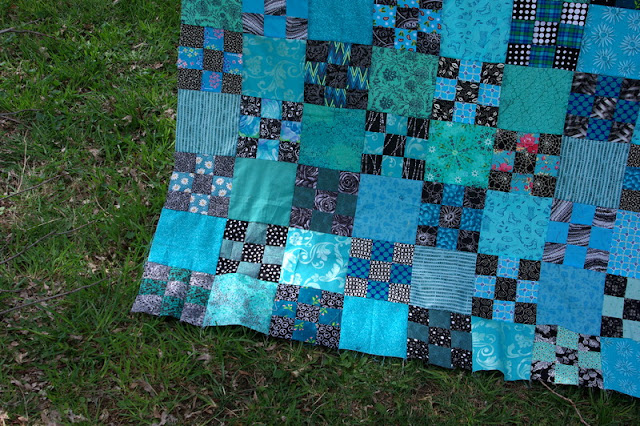 I have been working on several UFOs this month that fall into a chain theme so I was in chain brain mode and dreamed up this Irish Chain. 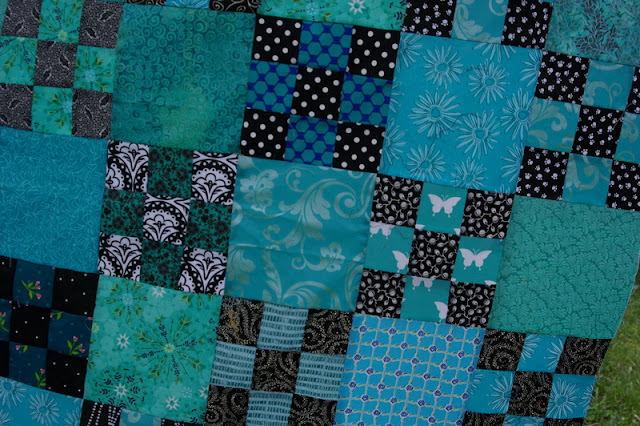 And now that I have that out of the way the aqua scrap chunks became smaller scraps so I can now proceed to make my normal Rainbow Scrap Challenge projects I make from small scraps. But the month has almost  run out so I'll just combine aqua with a blue month to make those normal RSC blocks. 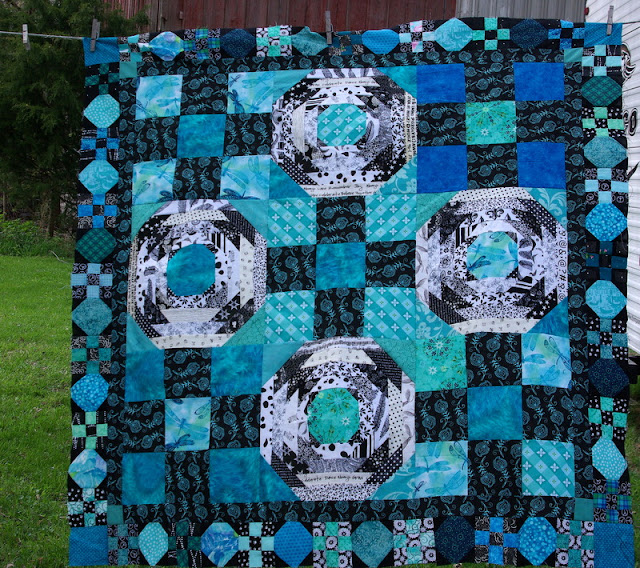 Oh, but wait a minute...I've been working on a Medallion Quilt too.  So far it is 45 inches square but I'm not stopping here. 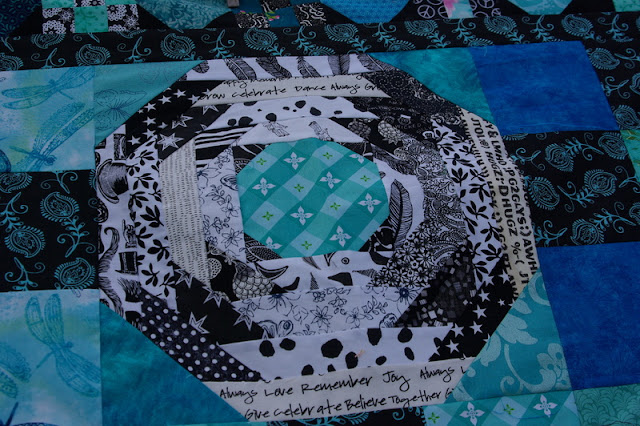 Previously I posted about these Pineapple Blocks that I didn't like. I made them incorrectly I think or picked colors that didn't contrast enough. Whatever. Some of my aqua scrap chunks were in with four of these Pineapple Blocks. I was going to call it quits and throw the four blocks in the orphan box to deal with later rather than sooner. Gayle (Mangofeet blog) suggested I make a nine patch medallion center with them.   So I did. 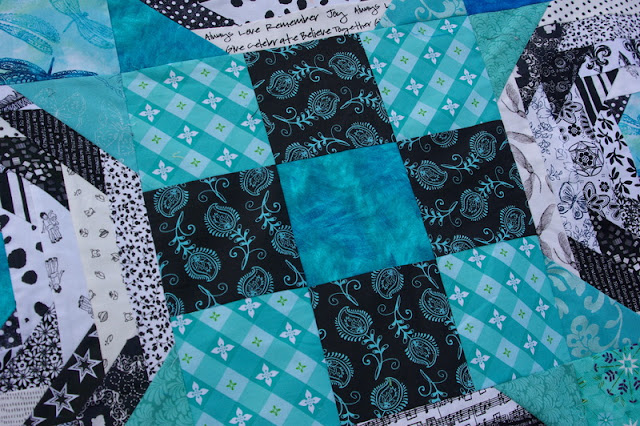 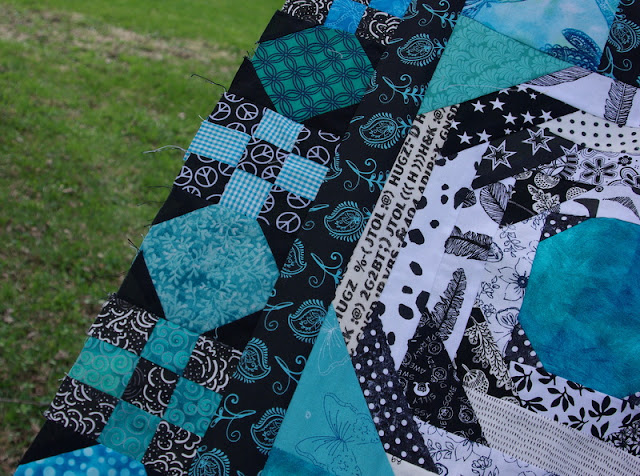 Then I added a little 1.5 inch border.  Then I made a Snowball/Nine Patch border.

And now I know what my next border for this will be because I've started on it!

Now i really love your Irish Chain in those blues (my absolute fave color--any variation thereof, too) with the blacks...Just a wonderful look--great work on both of these...
hugs, Julierose

I like your versions of aqua. The medallion quilt is a great idea

Absolutely great Chain Brain ideas. Super idea of Gayle’s to use those unloved pineapple blocks as a Medallion centre. It’s looking fabulous! Both quilts will be amazing. 🤗

The Irish Chain with aqua and black and white turned out just great! I love seeing what you did with those chunks! And the medallion with your unloved pineapple blocks gets a "Wow!" from me, too. Don't you just love quilty friends who give you great ideas?!

Do those pineapple blocks know how lucky they are? You rescued them from impending orphanhood -- and with an innovative setting! (I like the Irish Chain, too.)

I imagine what your stash storage looks like that you can come up with such a variety of units on hand that make such wonderful designs.

Two winners for sure! How creative you are! Good job!

Wow, your Irish Chain quilt just glows! It's beautiful, and so hard to believe it came together from using scraps.

Loving the new medallion quilt and that Irish Chain is GORGEOUS!!

When you can get two quilt tops out of your “very few aqua scraps”, LOL, I can’t help but be impressed by the depth of your fabric stash. And those are both stunning quilts (can’t wait to see what you add next to the 9-patch medallion!) You and Gayle are both amazing quilters, but as a design team you’re unstoppable!

Love the Irish chain so simple but really nice in that color scheme! And the pineapple blocks look like thay belong there! Their shape is complemented by the snow balls, it looks great!

Such fun creativity... a wonderful way to design a quilt!

Pineapples and nine patches combine gloriously. Such depth of value.
You are always an inspiration.

I'm in aqua and quilt heaven!
Your mix of prints is exciting.
And your photos are fabulous.

Love the irish chain in teal and what a great idea Gayle had for the new quilt with the pineapple blocks! Looking good.

Ya done good! And for not having much aqua, you still managed to pull two quilts out of thin air! Amazing!

BOTH of those AQUA quilt tops look SEW good!!!

Love the Irish chain and the pineapple. Thanks for sharing that layou. I have a few pineapple blocks that I don’t care for too much. You have given me inspiration for them.

Such a wonderful variety of aqua and the black Irish chain is amazing. Heaven only know how many quilts you would have created if you had a lot of aqua scraps.
Pat

Wow two great quilts in one post! You certainly met your aqua goals this month!

Love the Irish Chain and all that aqua!

that aqua irish chain blocks is definitely one of the most beautiful and glowing quilts that i've ever seen!!!

Black and white and aqua look so, so good together! Looking forward to seeing the next round on the medallion, and the finished quilt on the aqua chains. You got quite a bit done in the sewing room, so I'm guessing your gardening hasn't reach fever pitch yet.

What a great selection of aquas you have! It's one of my favorite shades of blue. And I really like what you did with your medallion and pineapple blocks. I'm glad you didn't just toss them back in the orphan box. Both are great quilts.

I haven't done an aqua based quilt yet,but seeing both of yours paired with the black scraps makes me giddy. Both are gorgeous. I can't wait to see the next row of the medalian quilt. Way to use those pineapple blocks. Gayle had a great idea! Oh I love our quilty blog by friends!

As a blonde-haired, blue-eyed girl, I love all shades of blue, especially aqua. Your simple Irish Chain made my whole body relax, thinking of cuddling up under a quilt like this. I also like what you decided to do with those rogue pineapple blocks. Brilliant! Sandy at sewhigh.blogspot.com

Your Irish Chain quilt is so eye catching! LOVE that you made it out of scraps. It's simply beautiful.:)

I am a bit jealous of all your lovely aqua fabrics. You really turned them into some lovely quilts!