The Case of the Missing Aqua, Teal, Turquoise and Blue-Green Scrap Chunks 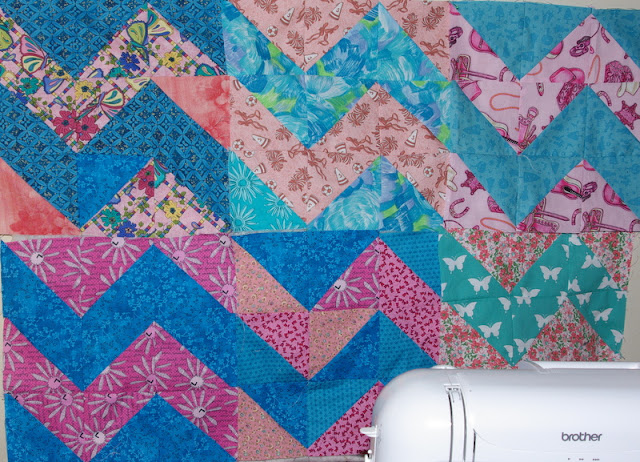 Usually when a new Rainbow Scrap Challenge color is announced  I go to my milk crate of chunk scraps first to make some blocks.  I didn't see any of this month's color (aqua, teal, turquoise and any other variation of blue-green) in the milk crate and I knew I had some.  I had to do a bit of searching through project boxes but I eventually found some of those chunks mixed in with two different UFOs.

The first UFO is a pink and aqua/teal/turquoise/blue-green Streak of Lightning I started in 2017, and added to in 2018.   I probably made blocks each year when aqua came up as the Rainbow Scrap Challenge color of the month and used what scraps I had at the time.

This was a UFO waiting for scraps to happen and evidently they happened and I forgot about them happening.

Anyway...I found some pink and aqua scraps in the project box, counted 19 blocks so made 99 HSTs for 11 more  twelve inch blocks, six of which you see above. 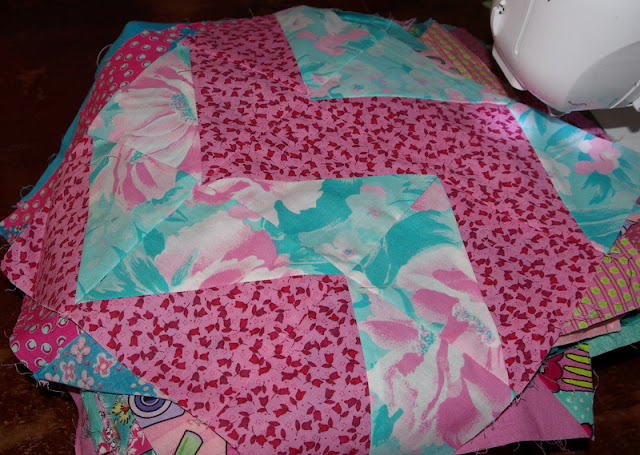 Now they can join with the other 19 blocks and I can assemble a quilt top.  It will be a nice sized 60 x 72 and when finished will be donated locally. 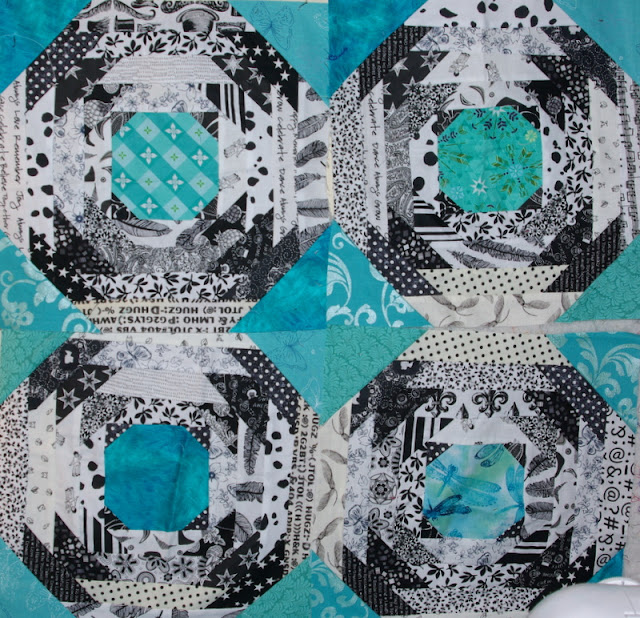 The other project box that had aqua/teal/turquoise/blue-green chunk scraps was this one with four twelve inch pineapple blocks.  This was a UFO because after I made the blocks in December 2016 I wasn't happy with them. I knew something was wrong with them but wasn't sure what. 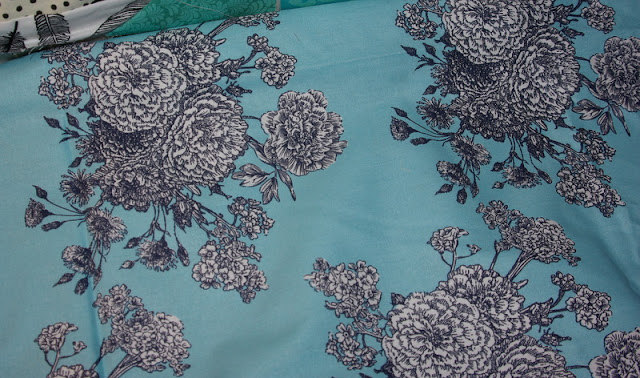 I normally don't know what I'm going to use as a backing for a quilt until well after the top is finished but in this case the color scheme for the blocks was inspired by this five yard piece. 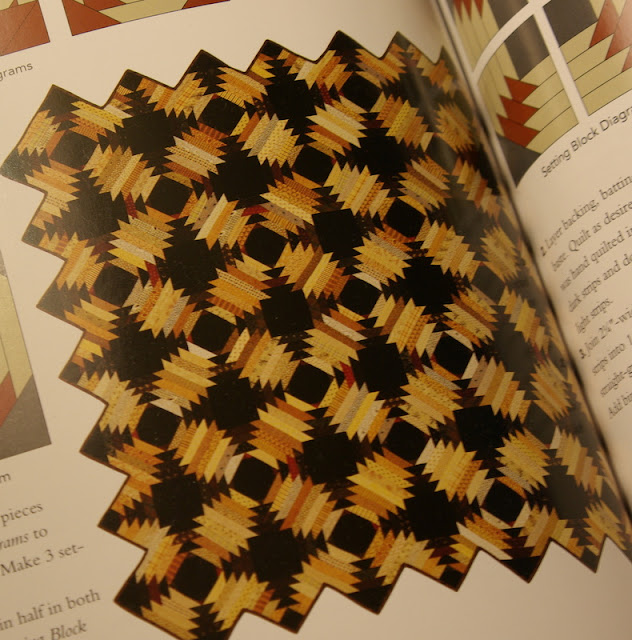 And I thought I would make this Pineapple quilt so made those four blocks I found in the UFO project box that didn't make me happy.  And now I know why - not enough contrast. And, I didn't use the pieces in the block properly I guess.  Good thing I don't cut all pieces for a quilt before I start it. 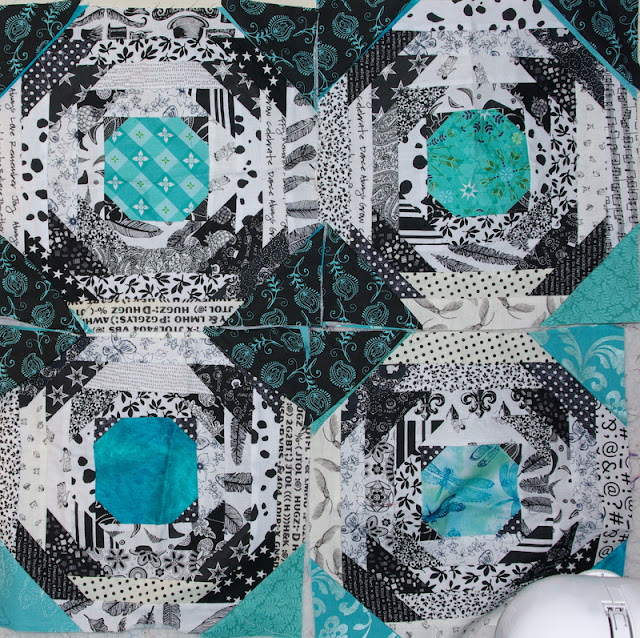 So, off to the orphan box these four blocks went. The Pineapple quilt in this color scheme was not meant to be.  Maybe someday I'll dig them out of the orphan box and try making a medallion out of them or I'll make a few more different twelve inch blocks in the same color scheme and make a sampler. 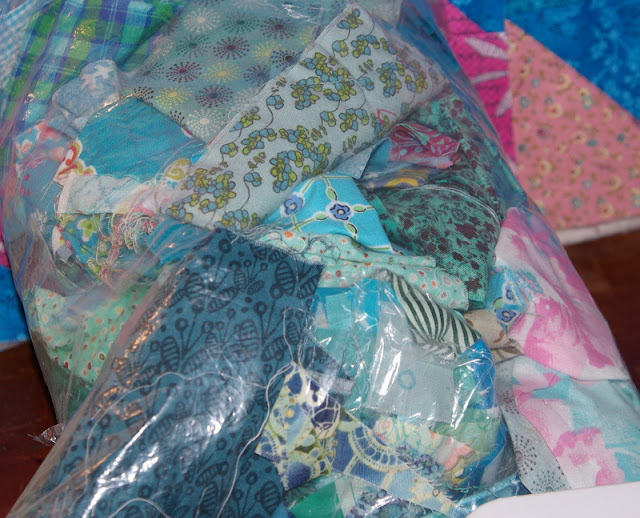 So after making the 11 Streak of Lightning blocks and after turning the Pineapple blocks into orphans I now have these chunks to work with.

But wait! I'm not going to start in on my usual Rainbow Scrap Challenge blocks that use scrap chunks just yet.  I still have to make a quilt to go with that aqua, black and white backing fabric.

You know I've been working with chains this month so an Irish Chain quilt just popped into my head. So now I have a new start. I have a shoe box of black and white 2.5 inch strips that I swapped long time ago so I'll combine them with 2.5 inch aqua scraps I 'll cut from chunks in that plastic bag to make six inch 9 patch blocks. 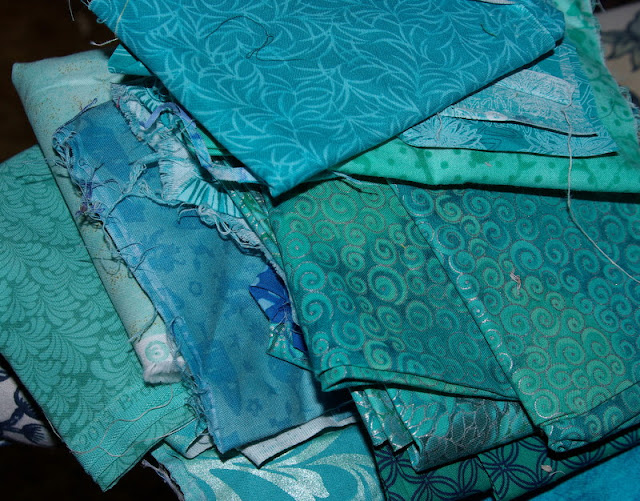 And I think I'll be able to cut 72 six inch squares from the aqua yardage I have.  If not then I'll make some aqua crumb blocks to fill in.

And then after that I'll have some aqua scraps left for the Rainbow Scrap Challenge blocks.

I enjoyed reading your adventure about the mysterious missing aqua chunks.
I like your solution, keep looking and keep trying!
Great fun and projects happening here.

Good for you for deciding NOT to pursue the pineapple blocks. Those four would make a great oversize mug rug or a table mat. (I try not to feed an orphan box - I'd rather make a pillow or a mat of some sort and have the blocks be usable now instead of someday).

Glad you found all your tricky hiding aquas! You've got them looking good now!
Maybe your orphans are giant snowball blocks? Make a big nine-patch with five stars or something, and you've got a medallion center...

Smart to just be done when a block isn't floating your boat. Maybe those orphans will end up as Sunshine lotto blocks? They would have worked well in my latest panel quilt for Wrap A Smile :)

Those are beautiful shades of aqua/teal/turquoise/blue-green! Good thing you rescued them. They will make a gorgeous Irish Chain with the black and white added! I can't wait to see what the quilt will look like...tomorrow maybe?

I love those Streak of Lightening blocks! And just like people, sometimes you have to let quilt ideas and blocks go. I bet you’ll come up with a good use for the orphans down the road!

Love the streak of Lightning blocks so much! You always have so many good projects going on!:)

Phew! I love to read how you "discover " buried treasure and then work through your thought processes to achieve a plan for new blocks or a finished quilt. You have both an inventive and logical mind, very inspiring to other quilters.