Tales From The Scrap Yard: Farewell To Green 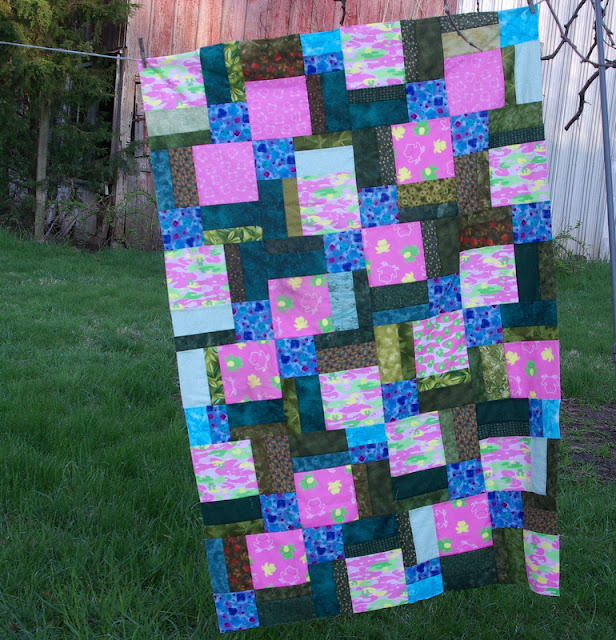 I received several bags of scraps back on March 24. I sorted them into various categories and then started with a grocery bag of green scraps. The goal was to see how many small donation quilts approximately 40 x 6o I could make from those scraps.

This is top #5 that came out of that bag of green plus some pink 6.5 inch squares with frogs that were also included with all of the scraps. The blue squares came from my scraps.

I've been blogging about all that I make from the March 24 gifted scraps (aka Candra scraps) in Tales of the Scrap Yard.

As seen previously on Tales from the Scrap Yard: 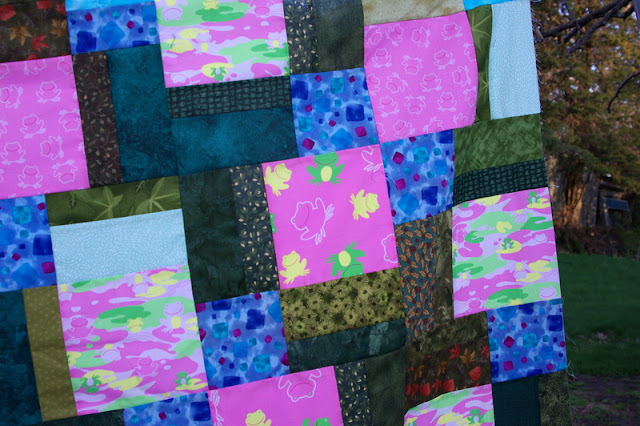 I was going to make Happy Blocks with the pink 6.5 inch squares in the center and bordered by 3 inch green pieces but none of the green pieces was long enough to use for two 11 inch sides that would be required. I always like to try to make the blocks for donation quilts around 10 inches if I can. So I decided to sew some of the 2 inch width scraps to the 3 inch scraps and then cut them to 6.5 inch lengths in order to border two sides of the pink centers. Well, then I needed some cornerstones and could not decide on a color. I finally thought...well, I have frogs, I have green land and so maybe I need to add water. And so I went to the scrap bin to find some water.  I had a blue that looked like water with stones in it and/or flower petals floating on top.  But of course I didn't have enough of that "water" so I had to piece a few cornerstones I kept near the edges with a different "water". 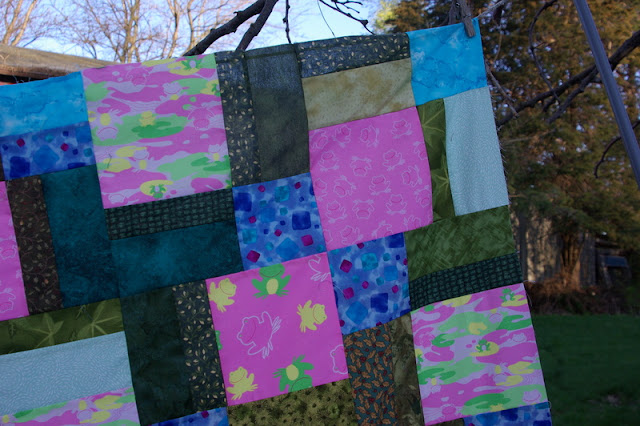 And so another top was made that will be donated when finished.  And that left me with just a few more scraps to deal with. 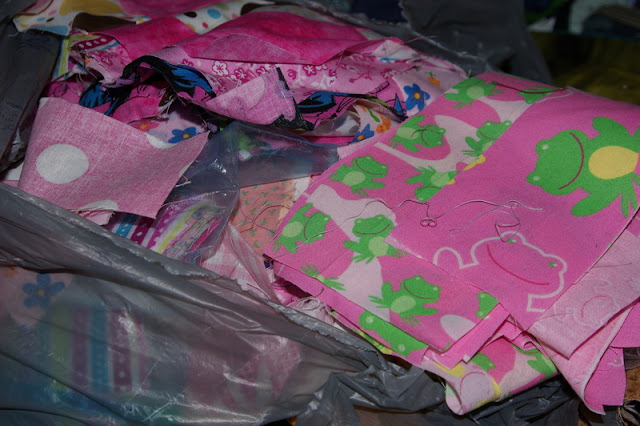 I put the remaining pieces of pink fabric with frogs into my pink orphanage of pink parts, orphan blocks and odd bits of pink fabrics. I think there might be enough items in there to make a couple of quilt tops now. Well, not NOW...I mean later. 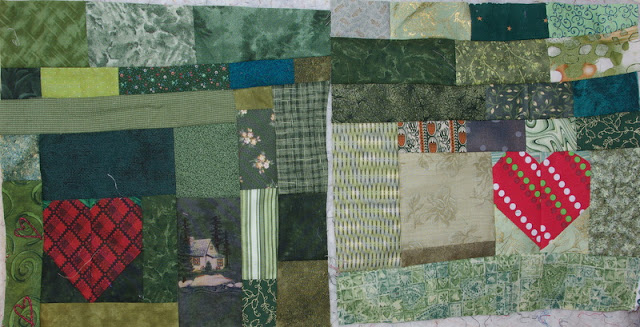 Next I made a couple of 12 inch (finished) slab blocks. I first made a couple of 4 inch (finished) hearts from scraps to add to the blocks. I will make some of other colors to add to these blocks when I get the chance. They will all contain a red heart somewhere within the block. I made a "with heart" quilt like this in the past and really like how it turned out so why not make another? 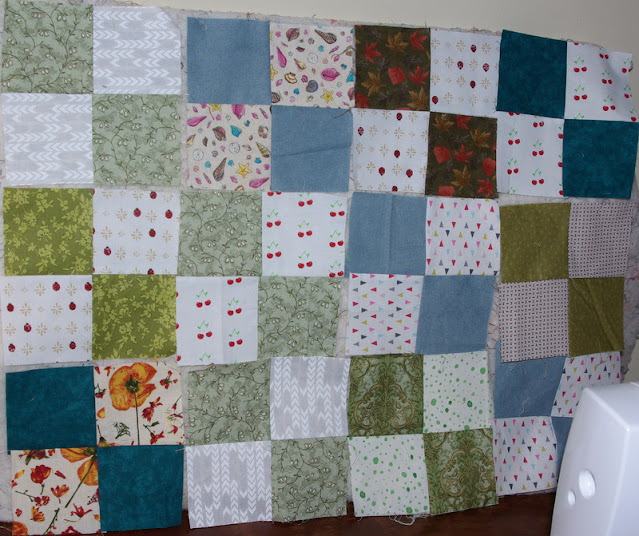 Then I had some 3.5 inch width pieces left over from making the Double Four Patch quilt so you know what I did with those...I made Four Patches for the Parts Department. That is almost always what I do now when I have at least two squares left over of 3.5 inch widths of fabric. I use low volume scraps for the alternate squares. 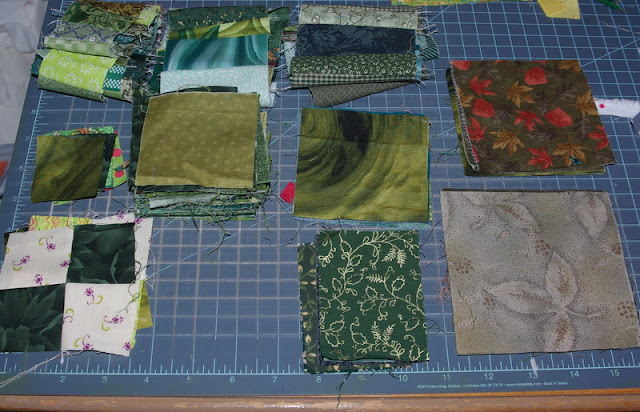 I also make Four Patches with left over 2 inch scraps for the Parts Department. Everything else got cut into squares and if there was not enough for a square then it was sewn into a strip for a future Chinese Coins quilt.  Oh, I do also cut 3.5 x 2.5 rectangles and will continue until I reach 1600 which will be enough for two quilts I have in mind. ( I think I may be almost at the 1400 mark now). 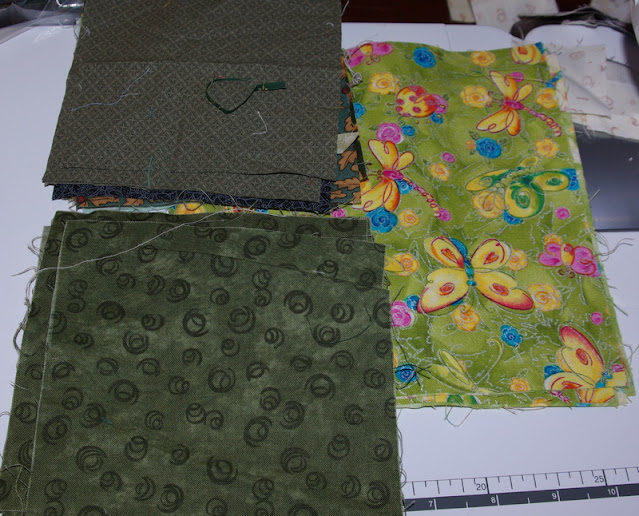 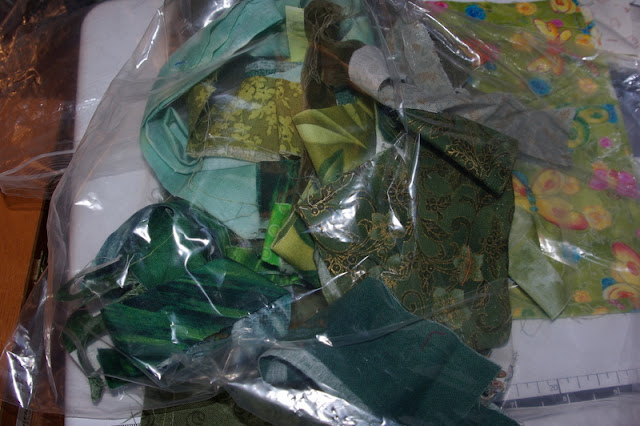 I also added some strings to my box of all colors of the rainbow strings and... 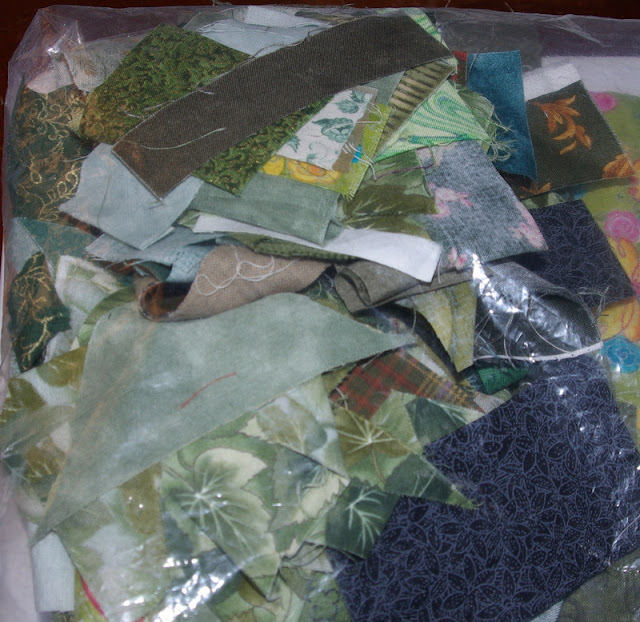 ...I added some crumbs to my crumb box.  I usually differentiate between crumbs and slab pieces. For me crumbs are usually irregular shapes and smaller than scrap pieces I use for slabs.
Now that I've documented use of the green scraps I was gifted I'm ready to move on to the warm scraps- red/orange/yellow. So there will be more Tales from the Scrap Yard in the future.
Posted by Cathy at Thursday, April 22, 2021

Another great blogpost, Cathy. I always enjoy reading about your procedures. I would never have had the ideas you had to create your pink, green and blue froggy quilt. Looking forward to seeing what comes out of the yellow/red/orange scraps.

Wowzers! You always make the best possible use of scraps!
I've enjoyed watching you play with the greens - now I'm looking forward to the warm colors!

I am loving this series of posts along with the quilts you've made, Cathy!!

I have some of the blue"water" fabric with colored stones. I've used it in many baby and kid quilts. Always interesting to see how you put together all kinds of sizes and colors. Last summer I grabbed a bunch of dull looking green pieces, cut them into 1.5" strips and used them to tie up my dahlias. As the dahlias grew, the strips blended in with the leaves and they were soft enough not to damage the stems. Can't wait to see what comes out of the warm scraps.
Pat