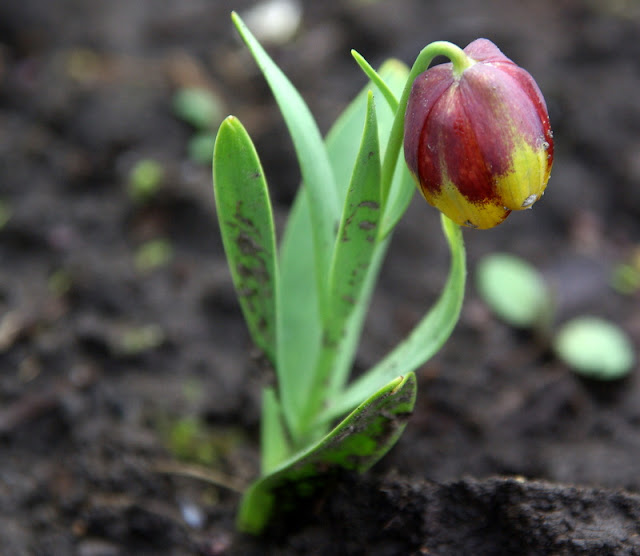 New in the flower garden this year is Fritillaria Michailovskyi. Only about 6 inches tall it is supposed to be honey scented (I haven't gotten my nose down that far to see if that is true)  and repel deer and rodents. That's fine to repel rodents as long as they aren't repelled into my house instead.  I planted lots of bulbs last fall here and there in dappled shade areas along some pathways and I hope it will naturalize over the next few years. 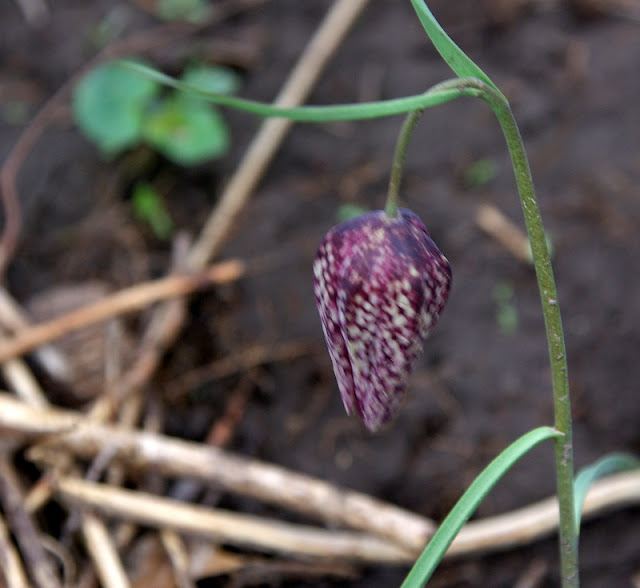 Fritillaria Meleagris (Guinea Hen Flower) also pops up here and there in the flower garden. I think some people also call these Checkered Lilies. 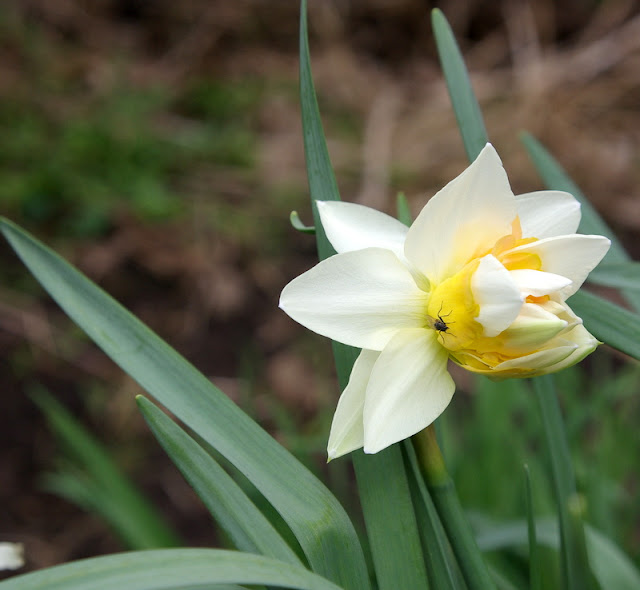 Some of the Daffodils are still in bloom. 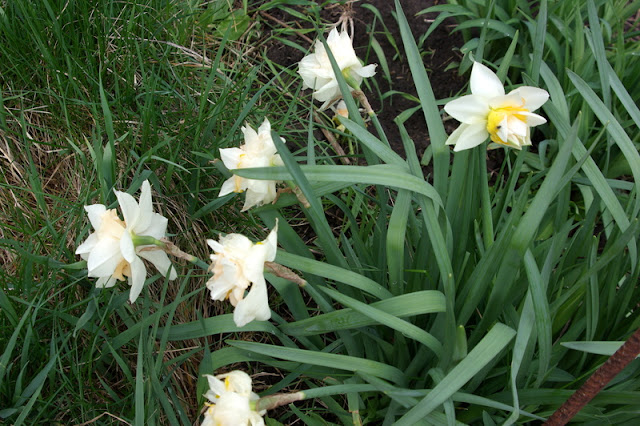 But it has been raining here off and on for several days and the rains have kind of beat down most of the Daffodils. 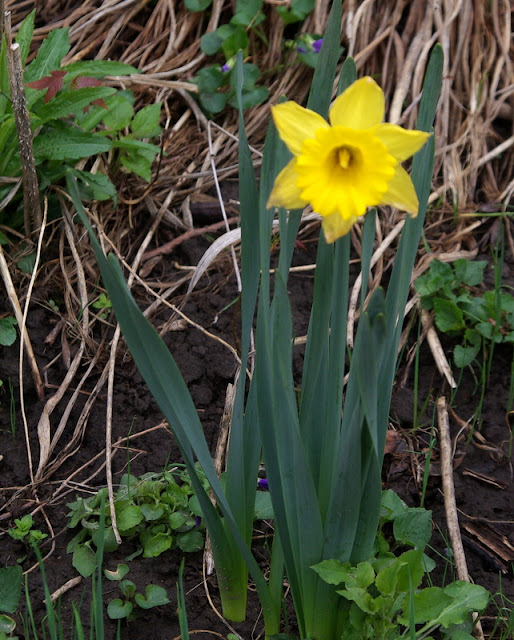 I have several different kinds of Daffodils and since they are one of the first flowers to bloom in Spring they are always a welcome sight. 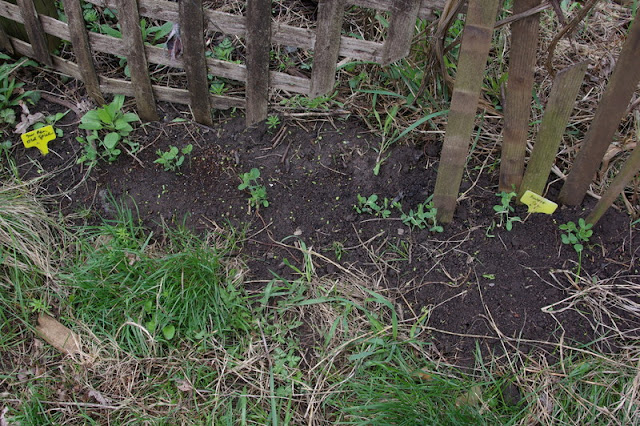 So far the rabbits and deer have left my Old Spice Sweet Peas alone. For many years I used to have a large section of trellis covered with sweetly scented Sweet Peas but I think the last five or six years I have not had any luck with them because something usually eats them as soon as they sprout. This year I started the seeds in a pot on the deck and transplanted them so we shall see how this works. Watch this space. 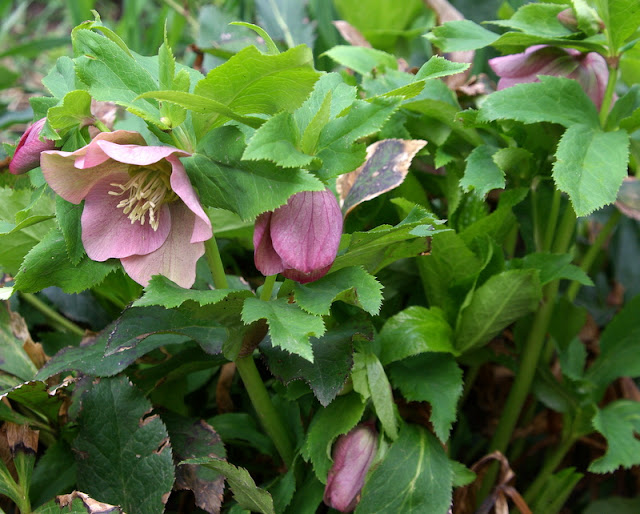 I thought something was eating my Hellebore buds because it sure seems like it is late blooming this year. But now I have blooms so either I was mistaken or whatever critter was eating buds went on to greener pastures. 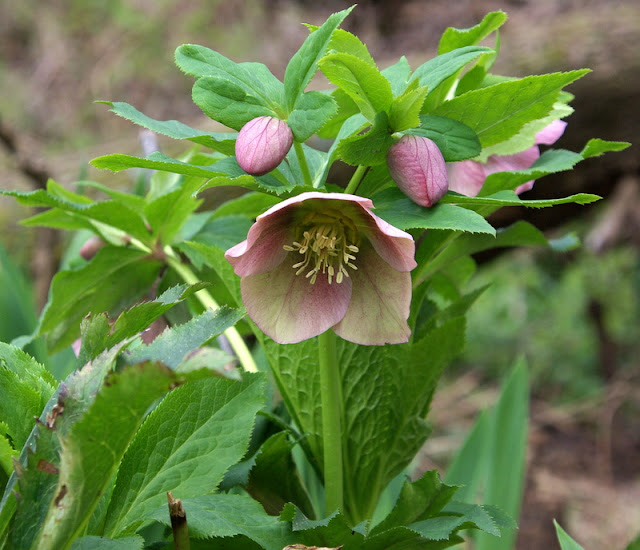 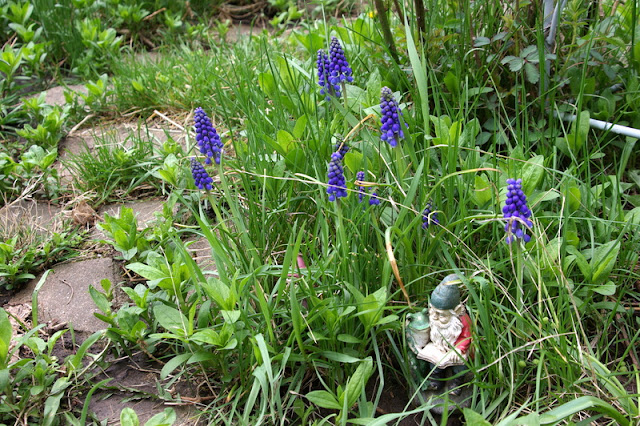 And in the Fairy Garden I spy a little patch of Grape Hyacinth (and weeds). 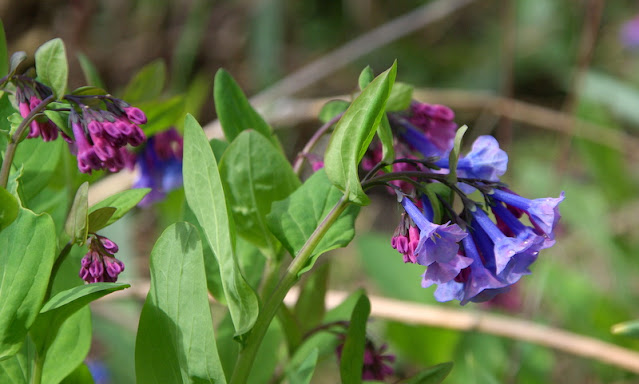 The Bluebells are starting to bloom. 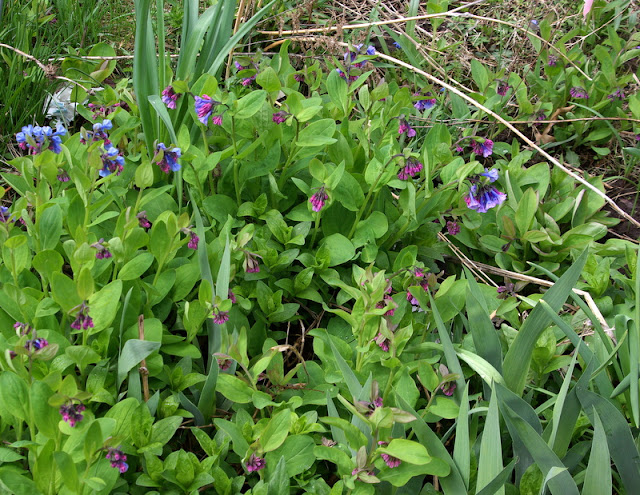 They have spread over the years and I think this year I may dig some up and put some in the new native wildflower garden. I think I read that they were native but there are two kinds of bluebells and this may not be the native one. I'll have to check my notebook. 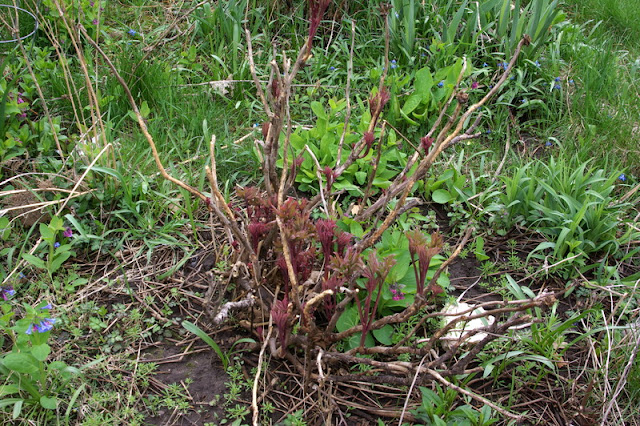 I have 4 Tree Peonies for many years and I thought for sure they were all dead this year because the wood showed a lot of deer damage. But I have been so excited to see new growth on all of them. 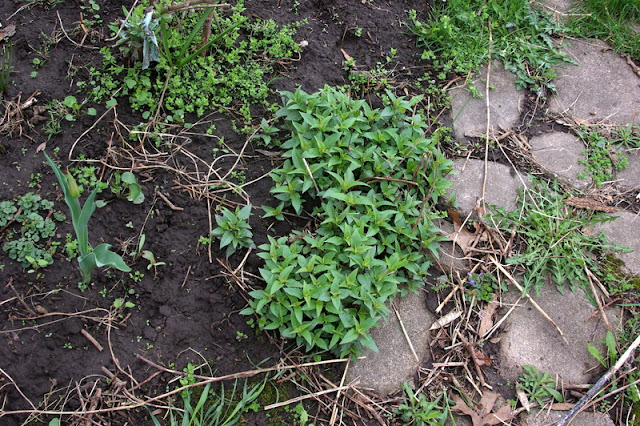 That Bee Balm (Monarda) spread across the path so I'm going to dig it out and put it in the new native wildflower garden. 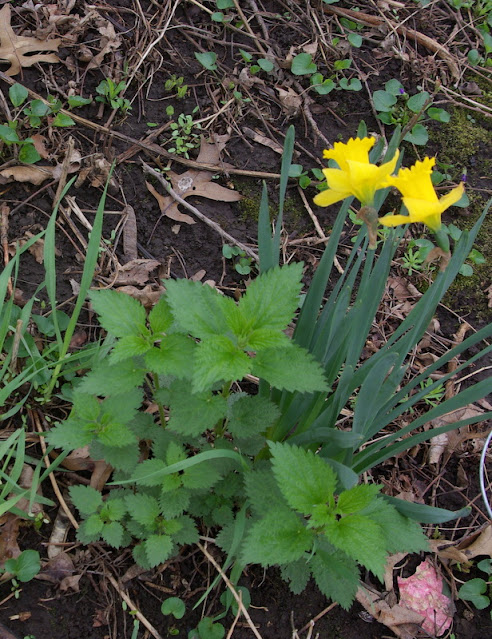 This year the Stinging Nettles look like they are sprouting up everywhere already. There is a reason they call it "stinging". I have to wear heavy gloves when I pull it up. It is good for the compost pile and in a few years past I have made Stinging Nettle tea and used it as fertilizer. But that's more work than I want to go to now so usually it just goes into the compost pile. Supposedly you can make beer or soup or salad with Stinging Nettle but I'm not going to try that unless I'm starving some day. 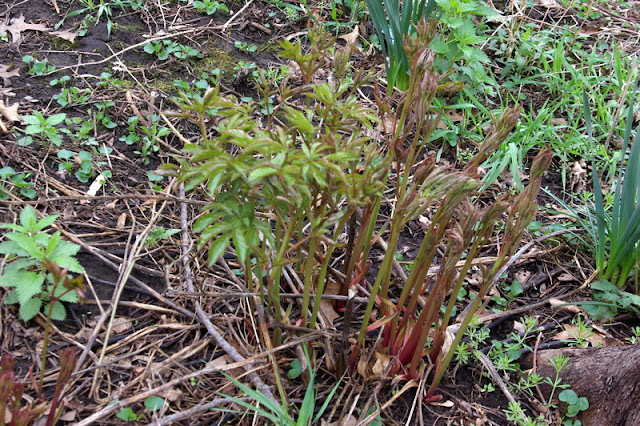 I also have herbaceous Peonies (there are three types of peonies - tree, herbaceous and a new one called intersectional) and I see those sprouting up in several places. I really need to get some of those round things to put around them to keep the flowers from drooping on to the ground. 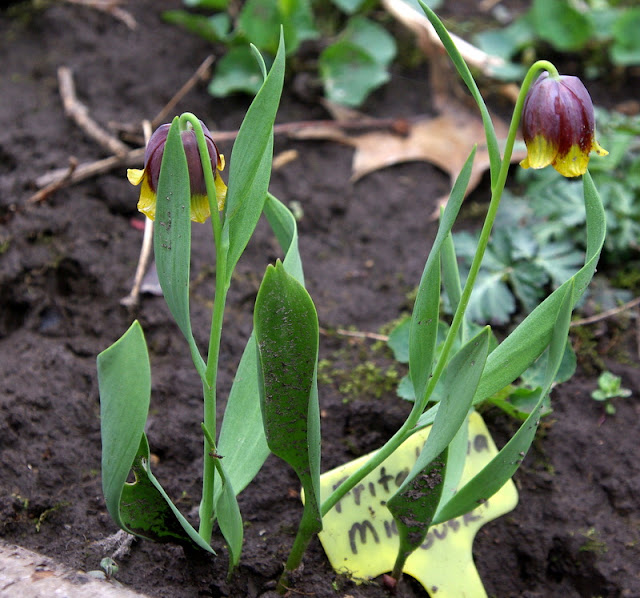 And here's another pathway I bordered with  those little Fritillaria Michailovskyi. 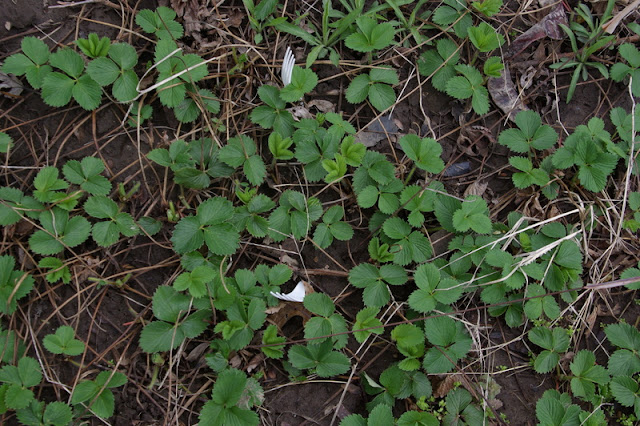 Remember last week I told you I stuck plastic forks here and there throughout the strawberry bed to try to keep squirrels and rabbits and who knows what else from eating the strawberry plants?? Well, so far so good.  The forks appear to be working. Stick a fork in it! The real test will be if the critters will stay out when the strawberries bloom and bear fruit. 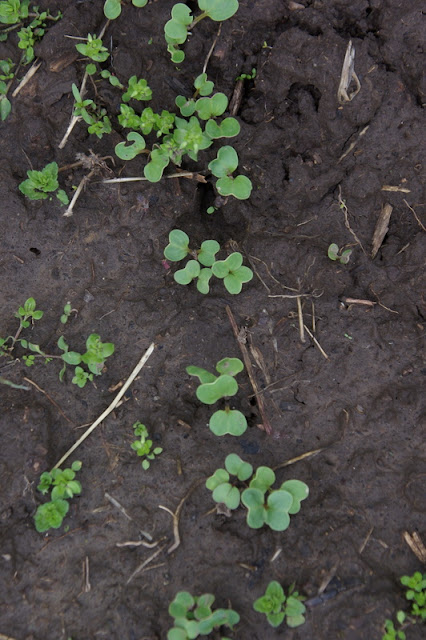 Radishes are up! They need a little thinning. 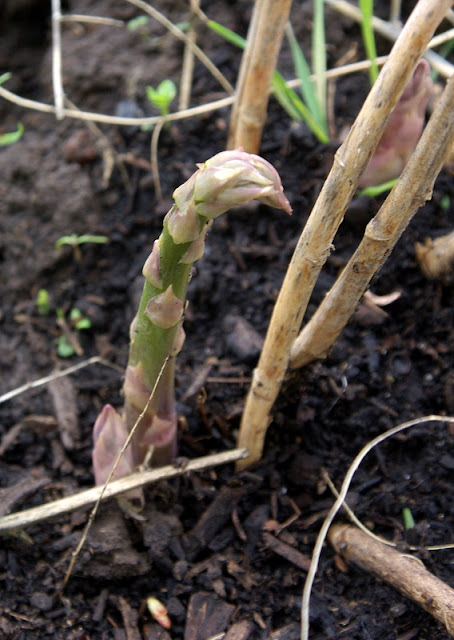 Asparagus is sprouting up. 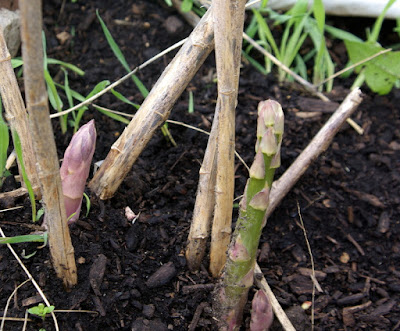 I think this will be a very good year for asparagus. I spread a lot of compost on the bed a  few weeks ago and now that we have had lots of rain I think after a few days of sun we will be eating some asparagus. Last year I had so much asparagus I was able to share with several others. 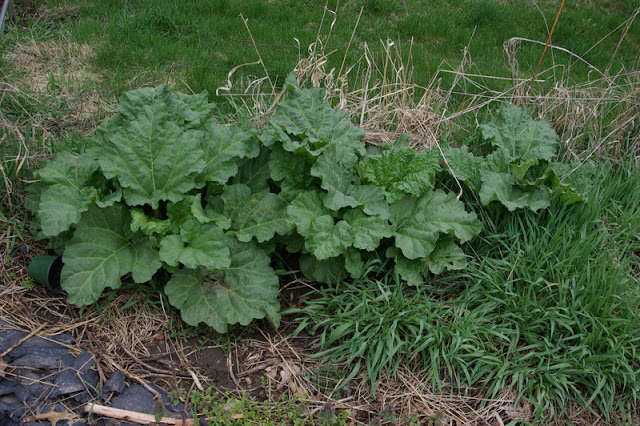 I still haven't weeded the rhubarb bed but it doesn't seem to mind. It has grown a lot in one week. I've dug out my rhubarb recipes! My fav is a recipe of an aunt of my husband called Sompun' Else and another I copied out of a library book long ago before internet and when I could not afford cookbooks--rhubarb bread. 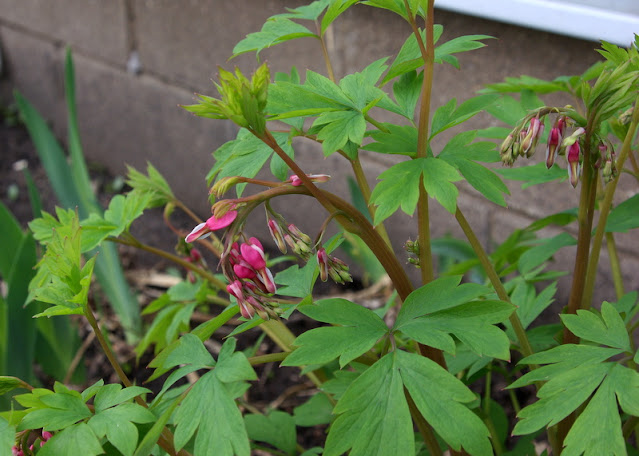 And finally the Bleeding Heart is starting to bloom. I used to have a white version but it disappeared a few years ago. And that's the way it goes.
Posted by Cathy at Wednesday, April 14, 2021

You have lots growing and it's all so pretty! I'm glad dome things are coming back that you thought were lost. I'm impressed with the asparagus! Yum!

Thanks for the treat of a visit to your gardens. They are lovely.

I am constantly amazed by how many quilts you make and even more so after seeing the wide variety of flowers and veggies you have. Love spring and seeing things turn green again!

Spring has definitely arrived where you live! Beautiful! ---"Love"

I'd love to know what Sompin' Else (rhubarb recipe) is! We like rhubarb too but I had to start with new plants last year because something ate my previous plants' roots. I won't cut any of the new plants' rhubarb for another year.

Your garden is so pretty. So many lovely flowers and veggies coming up. My rhubarb has made a big spurt this week too. Your family rhubarb recipes sound intriguing but I’ve never heard of Rhubarb bread! I do have crowns of my lovely mother in law’s rhubarb, transplanted in our garden well over 20 years ago. We thought we had lost them last year but they’ve bounced back. Stewed up some rhubarb yesterday, a gift my daughter had been given but she passed on to us as her husband and granddaughter don’t like rhubarb.

You really do have a green thumb! And as someone else said, you finish an amazing amount of quilts and still have time to tend to a huge garden. You must have a good tan already from being outside so much.

Thanks for your garden tour, warmed my heart!
Quilts and gardens go together don't they?

I do hope that you can share your Sompin' Else and Rhubarb Bread recipes! I am always looking for ways to use my rhubarb!

Your garden is looking great! Love the fork idea! I wonder if that works for turkeys? I ought to try it! :)

Thanks for the garden tour. I've found a number of the minor bulbs have pretty much disappeared due to chipmunks or voles or deer or rabbits. I'd love to have a rhubarb patch, but I couldn't find a place where it would grow, so I gave up. Now I have several invasive weeds that are driving me crazy. We finally had a good soaking 1" of rain this week, so everything is perkier and the grass is growing like mad. Back to the 40's the next two days, though, so that will slow me down. At least I can get back to the sewing machine for a few days.
Pat

Spring has sprung your side, beautiful! Your flowers remind me of spring in Norway. Daffodils, tulips and such don't grow here due to the hot and humid climate.

I enjoy the garden walks - I have many shady parts to our place that I need to find the right plants - been here 30 years. - I really don't like stinging nettles either. Hope I am never that desparate

Beautiful garden pictures. My mother would be jealous of your rhubarb and I'm jealous of the radishes. Of course Mother, daughter, sister, and me are jealous of all your gorgous flowers. Yes, get that round thing in to support your peonies. I'm always sad when my neighborhood peonies get beaten down with rain and wonder why they don't get the idea when they see others have and their peonies look good. Have a wonderful week!

So much pretty going on in your gardens!

How about sharing those rhubarb recipes with us? I have garden envy!

Another type of peony, the fern leaf peony, is one you should try. It was here when we bought our house, and has bloomed for a few weeks every spring!
https://www.gardeningknowhow.com/ornamental/flowers/peony/growing-fernleaf-peonies.htm