Tales From The Scrap Yard: Some Green Leftovers and Odds and Ends 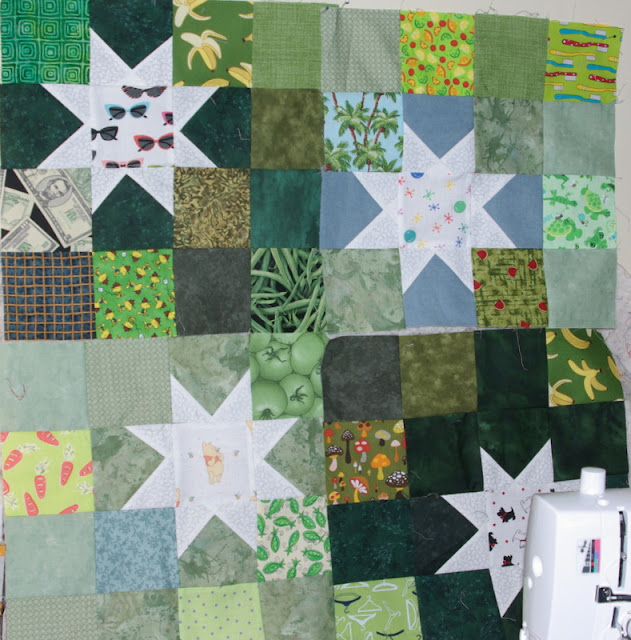 As seen previously in Tales from the Scrap Yard:
Backstory and Quilt Tops 1-3
Quilt Top #4
I'm still working with green scraps I received on March 24. Then I will move on to some of the other colors.
There were some 4 inch width of fabric strips in the scrap bag so  I decided to cut those pieces into squares and added some other scraps of mine to the mix to make some 16 Patches with Stars.  These finish at 14 inches and I ended up with enough scraps for four blocks so I will make some in other colors in the future to go with these. 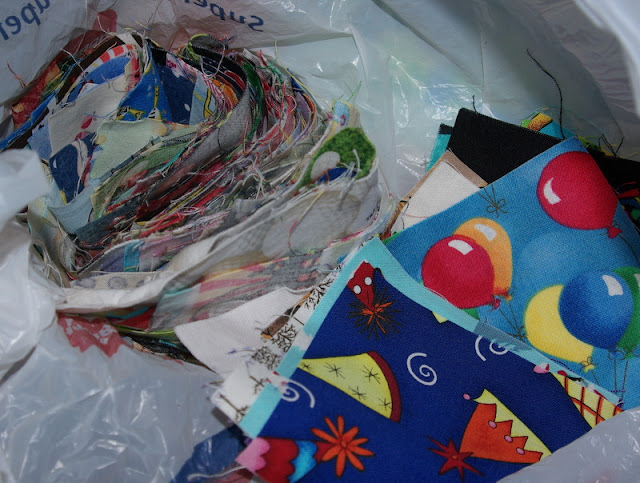 Years ago when the grandkids were younger I participated in several I Spy swaps. Several of the swaps consisted of 4 inch squares. I still have a lot of them so for those 16 Patch Stars I pulled out some green squares and some white background squares. 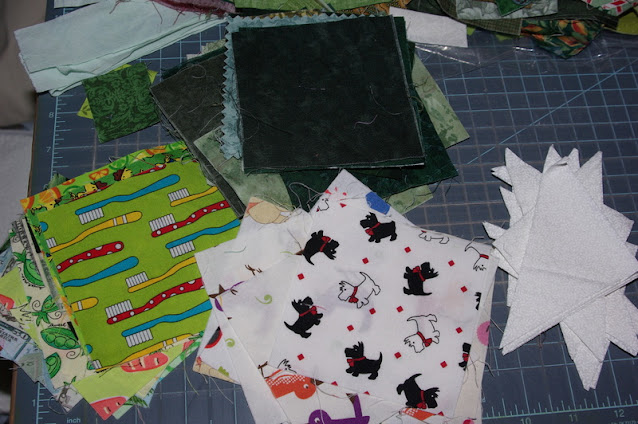 For the Wonky Star points I cut some white 3.5 inch square white scraps on the diagonal. 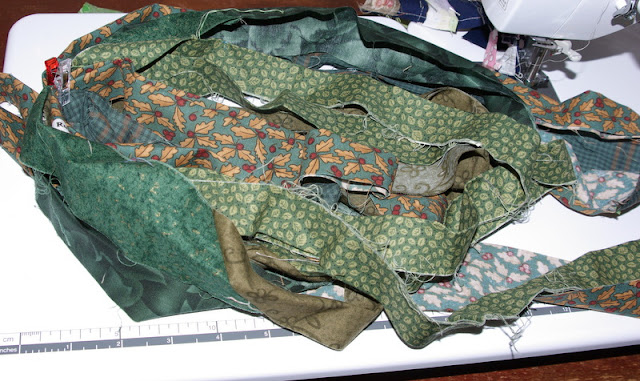 Also in the bag were some 2.25 inch width strips. I sewed them together for binding. I use this width for bindings sewn down by machine as requested for most small donation quilts but I use 2.5 inch strips for bindings I stitch down by hand. 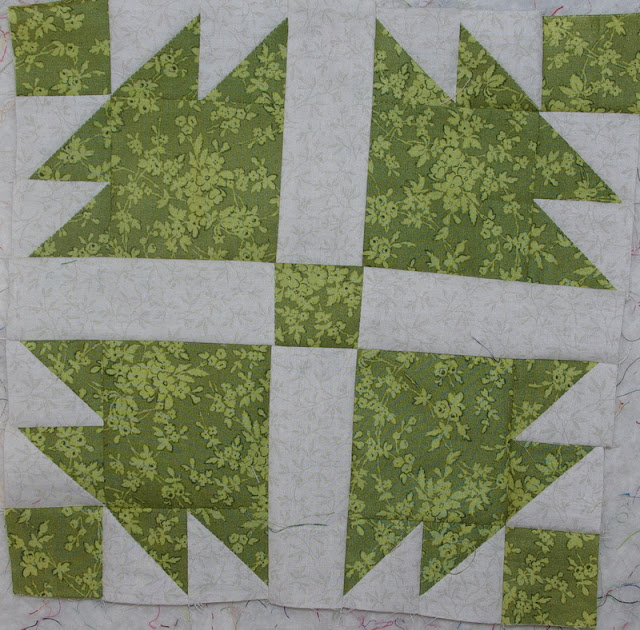 I pulled out a chunk of green floral that was just perfect for one of my Rainbow Scrap Challenge (RSC) blocks- Dove in the Window. 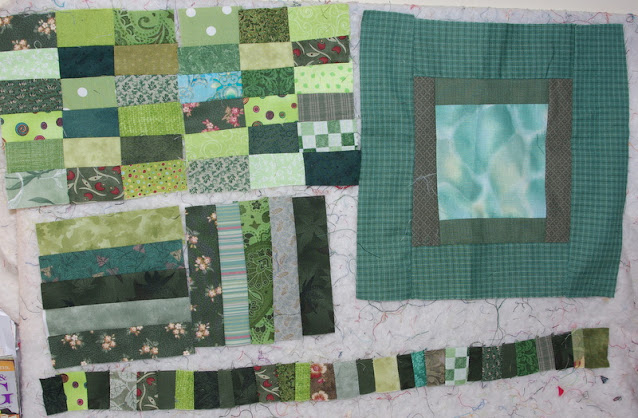 I had an orphan block left over from making one of the tops as well as some 1.5 inch scraps. I emptied most of my scrap bins I keep by width last year and now I try to make some basic blocks for the Parts Department instead of putting things back into a scrap bin. I cut some longer scraps into 1.5 x 5.5 pieces and sewed those into Rail Fence blocks that will finish at 5 inches. I then cut whatever I could into 1.5 x 2.5 inch pieces and made some Bit Coin blocks that will finish at 6 inches.  I also cut some postage stamps (1.5 inch squares) and if anything was left that was at least 1 inch wide I sewed it into a long strip for a future Chinese Coins quilt. 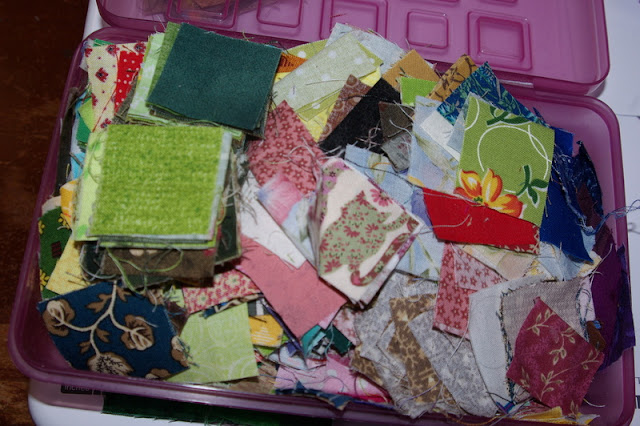 The Postage Stamps were added to my pencil case of Stamps to be used for another RSC project - 16 patches called Postage Stamp Pandemic (PSP 20). 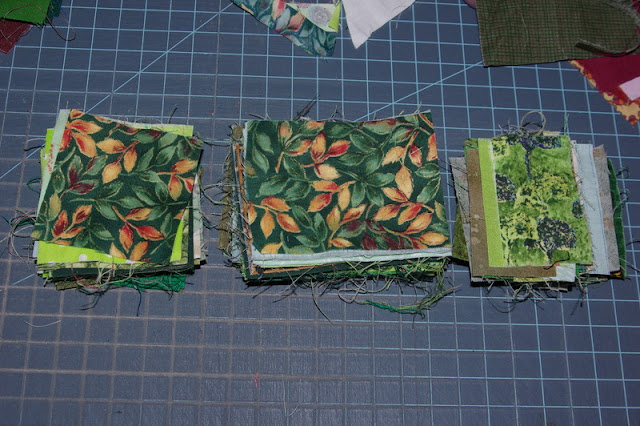 I also had 2.5 inch pieces left over from making some of the green quilt tops. And when I have 2.5 inch pieces left over after making a quilt I make Nine Patches if there is enough length to cut five squares. Then I cut 2.5 x 3.5 inch rectangles for a scrap quilt I have in mind. I need 1600 rectangles to make two quilts so I will keep cutting those rectangles from leftovers until I reach my goal. I think I currently may have about 1300.   Then if anything is left of the 2.5 inch strip I cut a square. If I can't make a square I sew the pieces together for a Chinese Coin quilt. 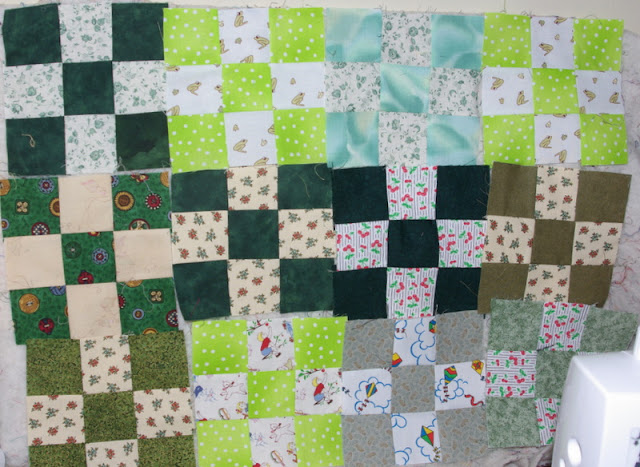 I combine the 5 squares with four low volume squares to make the Nine Patches that will finish at 6 inches. 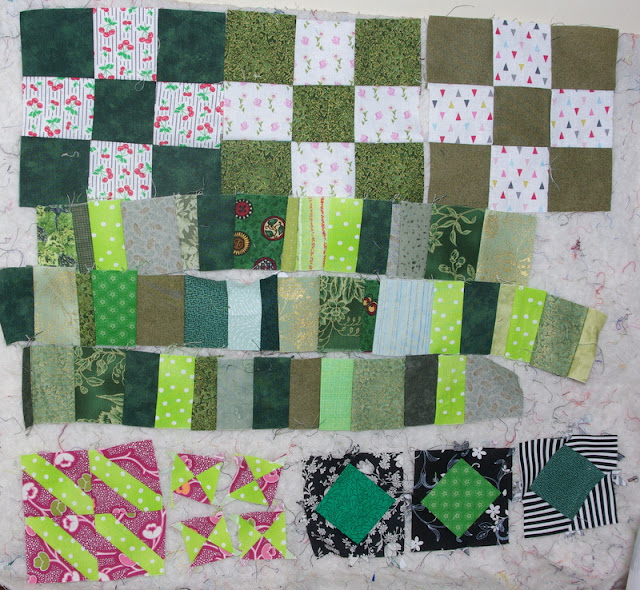 I also made a little Indian Hatchet and some small Chips that are a couple more of my RSC projects. And I make Wonky Hourglass blocks from Indian Hatchet trimmings. 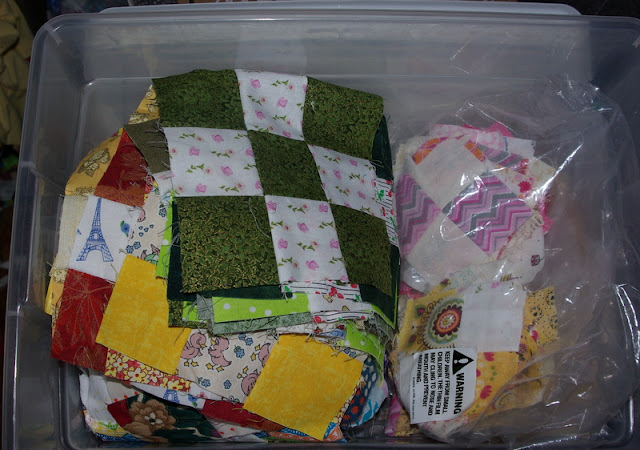 I've been making Nine Patches from 2.5 inch leftovers for quite some time and now have a big stack of them in the Parts Department. Someday I will turn those into some quilts but for now they will just accumulate. They share a Parts Department box with the Four Patches I make from 3.5 inch and from 2 inch leftovers - also accumulating as inventory for future quilts. 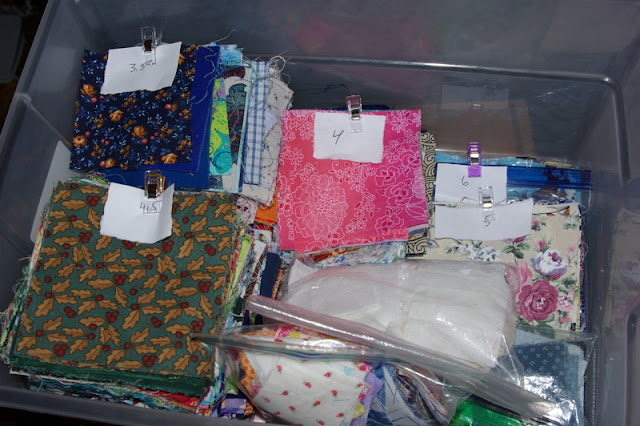 All of the various sizes of squares share a Parts Department box. I recently used most of the 2.5 inch squares in a Jack and Jill quilt top. 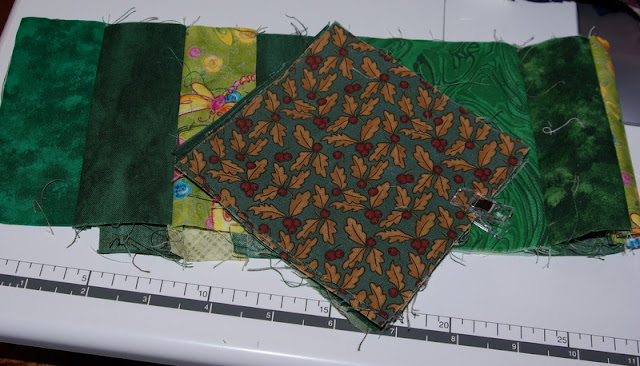 Now after I am finished with most projects I cut squares from the scraps if I can then sew the remainder of the pieces into strips for Chinese Coins. 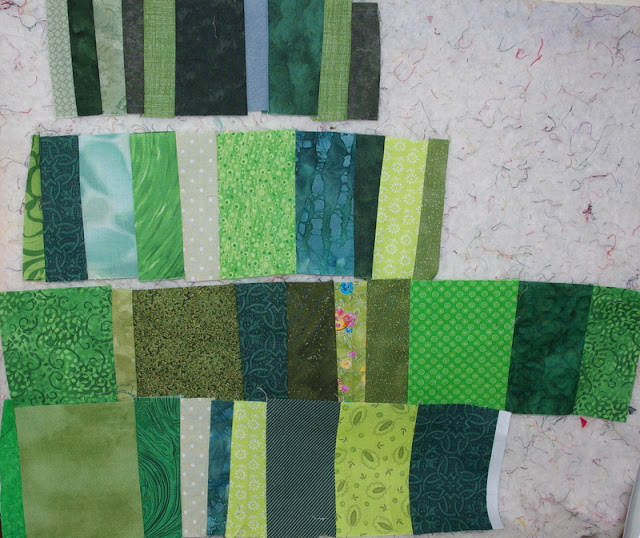 I've been accumulating the Coin Strips for some time now and one of these days I will make a quilt or two, combining all the different colors and widths. 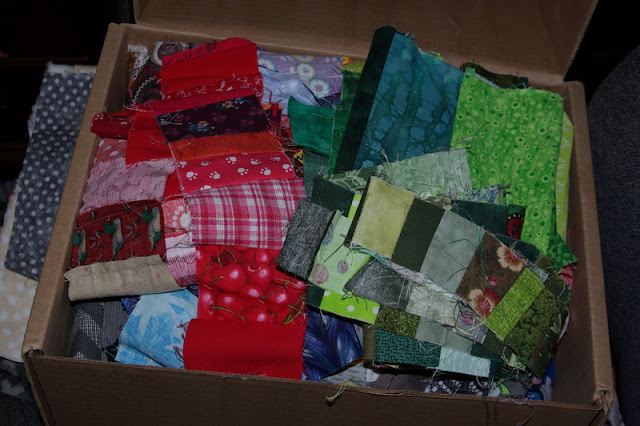 My Chinese Coins box is pretty full.
And still there are some green scraps left in the scrap bag. What to do...what to do...I know!...
Posted by Cathy at Tuesday, April 13, 2021

You're gonna use up all those greens! For some more variety (as if!) you could slice the nine-patches into Disappearing blocks.

Oh my goodness! I love reading how process scraps, like a machine or a computer programme?😉 Amazing groups of blocks which I know you will turn into super quilts.

Stop, stop! You're making my head spin, you are so amazingly organized!

A tiny bit of Light/Bright BLUE and all those lovely green scrappy projects... LOVE!!!

You are so organized and disciplined to get so much done with your scraps. I would love to play more with mine if I had more time!

Thank you for all the inspiration, all these many days. I open each and every one and take joy in all the scraps finding good homes. Not just being "put into a quilt to donate", but installed with a photographer's eye and a painter's nose for color into an oversized tortilla of love.

Lots of pretty greens! You are so organized and I strongly believe that is a 'must' when trying to use up all those pits and pieces. I think I'm pretty good at it myself. :)

You have an awesome scrap yard!!

You make those scraps 'good to the last drop'!

love seeing how you work with your Scrap Department!