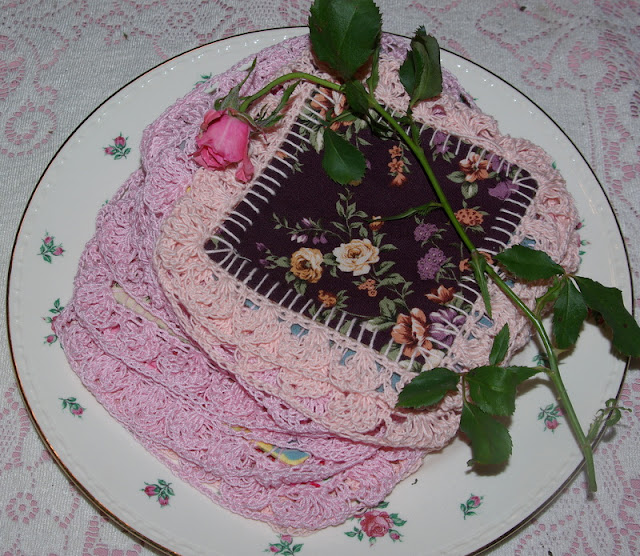 Back on June 14 I posted about an old UFO I pulled out to work on - crochet around 4 inch rose themed scraps later to be joined together into something.   I started on these back in September 2019 to use up both scraps and crochet thread.  When I picked up this project again last month I had 16 blocks. 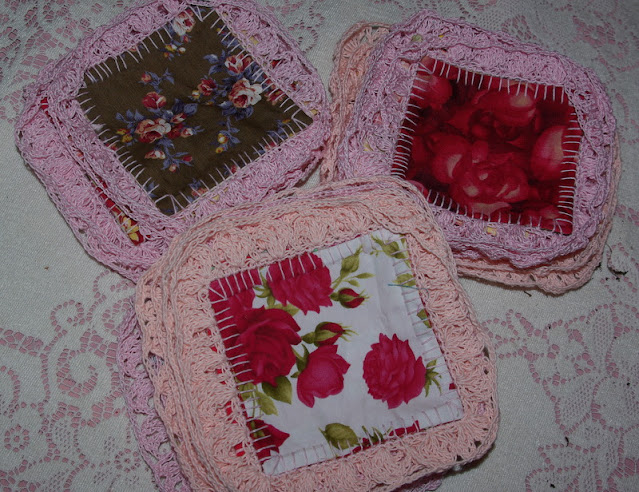 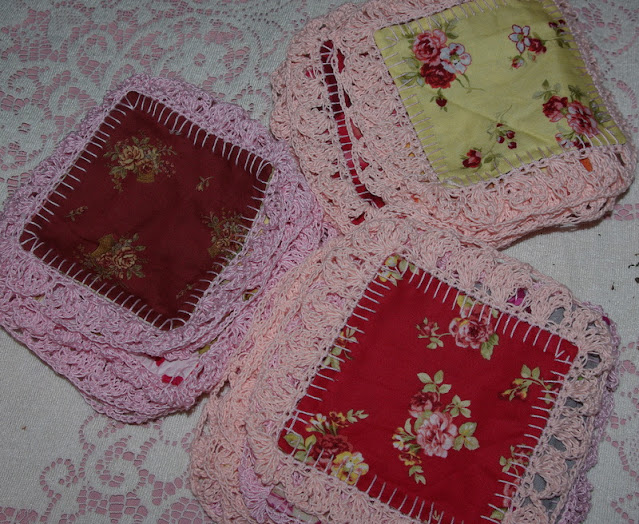 They are reversible.  I start with two 4.5 inch square scraps right sides together and sew 1/4 inch seam all around leaving a little opening for turning right side out. I turn right side out and blind stitch the opening closed. Then I blanket stitch around the outside edges and finally crochet shell stitches around.   I do have more rose themed scraps but as you can see I have already used up two balls of pink crochet thread and both of those were different shades of pink. 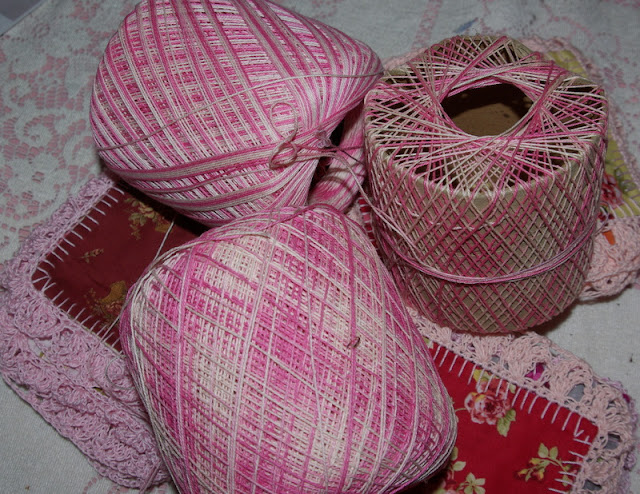 I do have more partial balls (spools?? things???) of thread but it is pink and white variegated. I'll use that next. You know...make do and all that.  Using up what I have was why I started down this road. I was originally going to make a throw but someone else  in blog comments suggested a tablecloth. Now I think I'm going to make a table runner to top the buffet. I just need to figure out how many squares that will take. 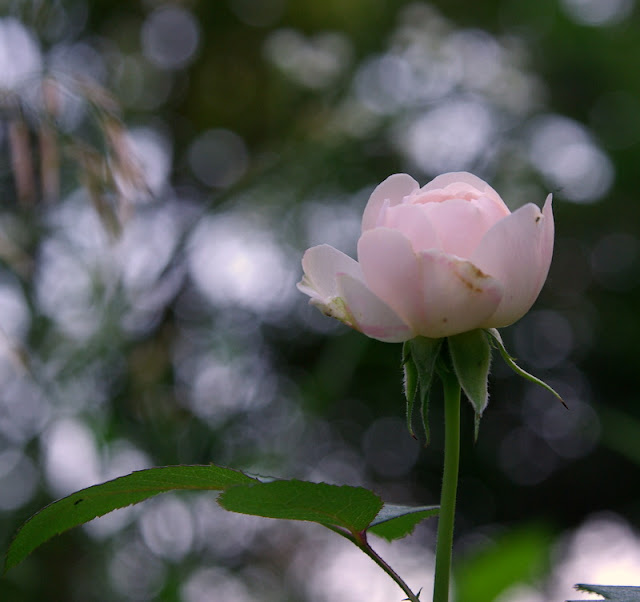 I do love roses. But you may or may not know that I have been battling deer this year who seem have the munchies more than they have in previous years. The deer around here and the rabbits love to eat rose bushes to the ground. And if any roses bushes escape their jaws then they feast on the rosebuds. 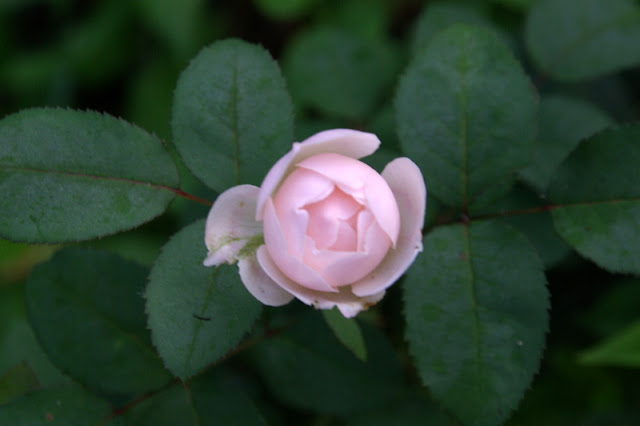 I do have several rose bushes so once in awhile I find a sweet smelling rose. 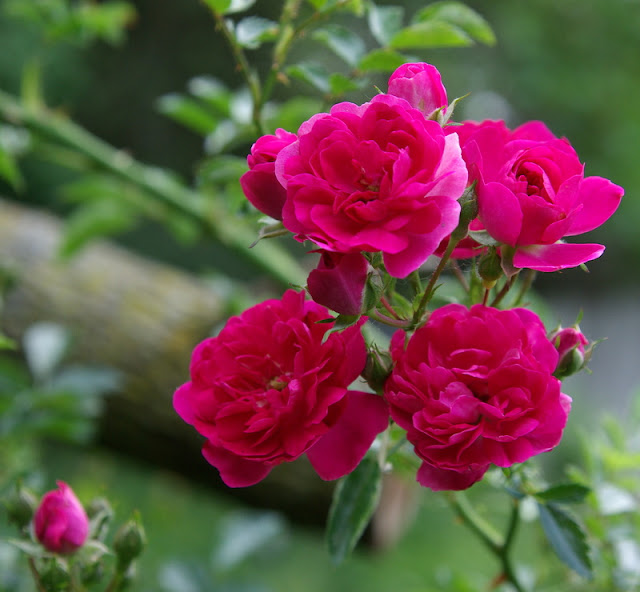 Now these Seven Sister roses are being devastated by beetles (not shown here). Since I'm pretty much an organic gardener I pick the disgusting beetles off and throw them into a bucket of soapy water. 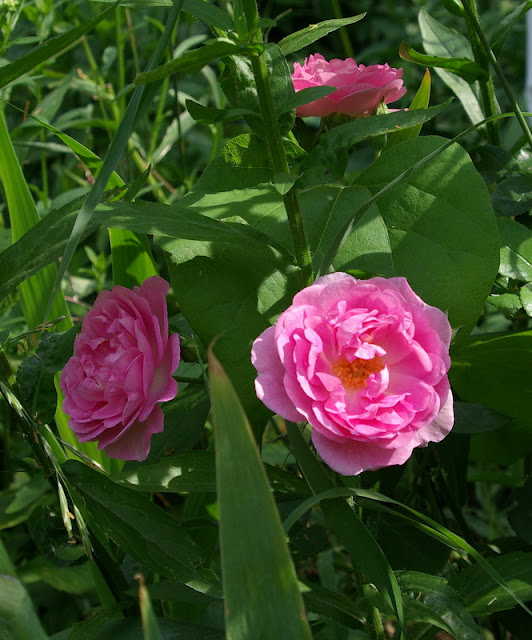 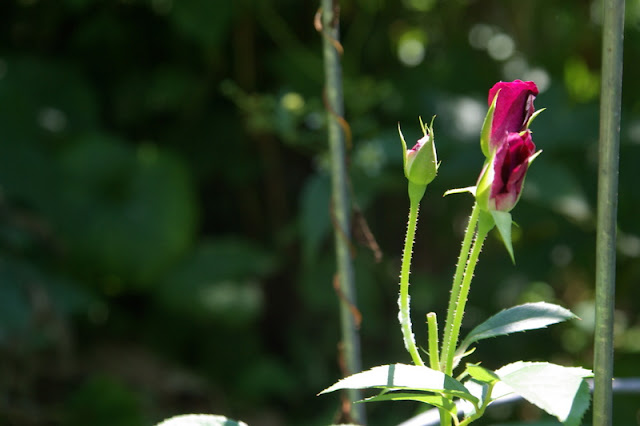 It wasn't me that nipped off the end of the stem there. 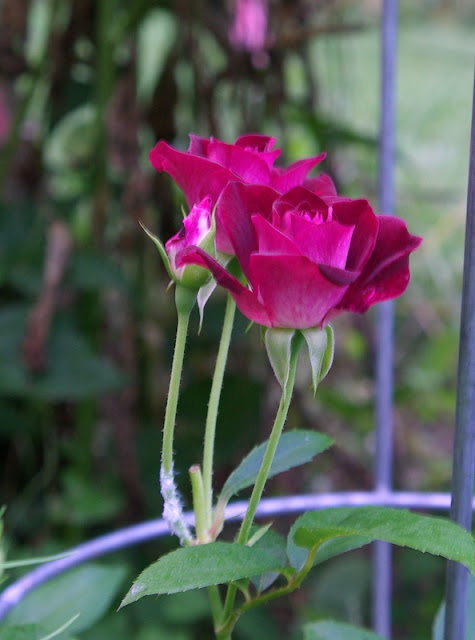 Last fall my husband bought me four Burgundy Iceberg floribunda roses after I showed him a picture of it and said I dreamed of owning one of those. The bushes are supposed to get 5 feet tall and blooms are supposed to be 3-4.5 inches and dark burgundy and smell like honey. 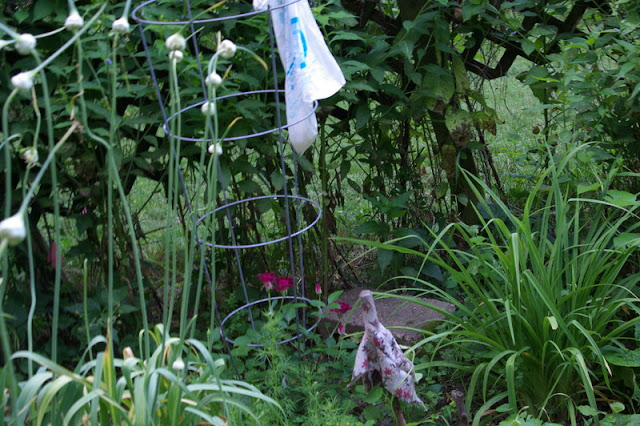 All four of those bushes as well as most others have been eaten almost to the ground several times but I'm determined not to give up on growing roses. (Yes, I'm stubborn).  I've been trying several things to keep critters at bay. I've planted racambole garlic bulbils around my roses. That's a top setting garlic  and those are the heads you see in white. I have a stake with one of my old gardening gloves on it ( as well as my sweaty scent) in front of this one. That bag you see tied to the cage has some Irish Spring soap in it. I don't like the smell of it and deer are not supposed to like it either. I also put shavings of it on the garden paths.  Then you can't see it here but there's a zucchini plant growing up some of the cages since deer evidently don't like them.   Well, something must be working now.
I do love roses!
I love scraps too so I'm hooking up with Oh Scrap! at Quilting is More Fun than Housework.
And I love hand work so I'm going to go visit all the Slow Sunday Stitchers at Kathy's Quilts.
Posted by Cathy at Sunday, July 05, 2020

Love your fusion design focused on rose prints... very neat idea! I am working on something similar and have been missing it lately.. maybe I will pull it out today for slow stitching day :D
Kathi

Deer are a big problem in one of the large neighborhoods just outside the city limits - they literally eat the flowers from the planter boxes on peoples' decks! The blooms you shared are beautiful - especially since they are survivors.

your roses are beautiful indeed....electric fence next?

Gorgeous roses, and lovely project you are working on. I'll be excited to see the end result.

Your roses need bigger thorns. Or possibly venison recipes clipped to their leaves...

Just love those crocheted blocks--what a fabulous throw that will make...Nice work...~ ~ ~ waving from our AC ~ ~ ~ Julierose

My hubby swears by using human hair around the area. He even brought some home from a salon once. Good luck with deer.

I do like your crocheted rose square, such a clever idea to use up your balls of leftover thread. Sadly, I've never got the hang of crochet, tried a few times but it doesn't seem to work for me. So I'll stitch to P&Q and a little knitting!

I love deer and rabbits, but I think I would love your beautiful roses even more. It's surprising to me that they could do so much damage to the roses with their thorns! Good luck finding a solution! Your rose fabric and crochet project has a wonderful old-fashioned look.

Oh the things gardeners will do to grow something :)

Thanks for sharing your pretty crochet and roses with Oh Scrap!

Great combination of your beautiful roses and blocks.

I was surprised how much the deer loved our roses. We tried Irish Spring last year to no effect. We have resorted to chemicals this year with much better results.

Your roses are beautiful! I love all of the tricks that you are trying; very inventive, but I must admit...I have resorted to Liquid Deer Fence (I think that is the name of it.). It is a deer and rabbit repellent and it works!

The roses are lovely, both crocheted and real. Glad you didn’t give up on fending off the animals.

I've never lived any place where deer were a problem. But I'm reading lots of blogs lately complaining about them this year. I'm guessing the Irish Spring is what's helping...that stuff stinks!

Until recently, I had no idea that deer ate flowers. Years ago, my uncle used to grow roses, and he had tons of bushes, and no problem with deer. Beetles and bees, but not deer. I remember that he had roses growing up and around the back door, and you couldn't use that door due to all of the bees constantly swarming around.

It is going to be beautiful, no matter what you make of it.

Your roses look so lovely, I could almost smell them. Hope you win the battle with the deer. Another thing that keeps them away is dog fur(if you have a furry pet or a friend with one)

Looks like you may have deer visiting your yard.