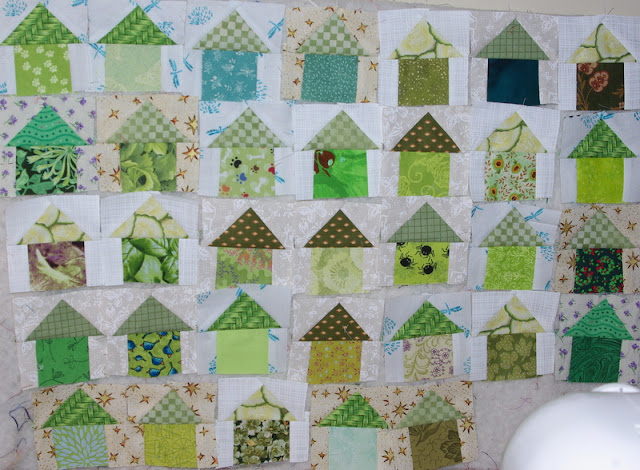 Greenhouses made from green scraps. And I see a bird house and a sunflower house too.

One of the first things we did when we moved to the country over 30 years ago was build a greenhouse. It was a big one. I don't remember the dimensions right now but it was big enough to have two heaters in it, one on each end, and an industrial fan for air circulation and we had another water pump installed right outside so we could water easily.  We started all of our seeds in pots we made from newspaper. As a secondary source of income we sold quite a variety of different lettuces early in the spring at Farmer's Market. There was a small restaurant that bought a lot of lettuce from us every week.  As the season progressed we followed lettuce up with herbs - I can't believe the amount of basil we sold but we also sold a lot of oregano, sage, and rosemary too as well as some of our own herb blends for meat rubs and salad dressings.  Our biggest seller was everlasting flowers - mostly Statice and Gomphrena and Sweet Annie and Helichrysum but a lot of others too that I can't remember just now.   And we sold lots of varieties of hot peppers and heirloom tomatoes. In the winter we went to a couple of local craft fairs and sold dried flower wreaths and lavender wands and a few other things.

And then my husband was sick for over a year. It was oropharyngeal cancer finally diagnosed at stage IV after numerous doctor visits. He received both radiation and chemo and had a G-tube for over a year (that fell out twice). We are thankful he is here now to tell the tale. I think a couple of granddaughters born five weeks apart at that time were the angels that gave him the will to live.

But I digress. Anyway during that time we received a couple of big snows and I didn't go out to the greenhouse (you can't see if from the house because it's behind the barn) to turn on the heaters to melt the snow on the roof. I didn't even think about it between working and taking care of  and worrying about my husband and other things going on in our family at the time. In the spring when I went outside I was devastated to see the greenhouse roof caved in. I guess it was meant to be. The insurance on the greenhouse helped me with medical expenses.

When the kids were little I grew them some Sunflower Houses for them to play in.  Basically I just put down a big piece of plastic as big as the floor space I wanted.  Then the kids planted sunflower seeds all around the outside of the plastic leaving a space for where they wanted the door. In between the Sunflowers we planted Morning Glories to climb the Sunflowers and make a roof. I think I liked the Sunflower Houses more than they did because they had their own secret forts they made down in the woods to play in.

I make my houses a little differently than the free pattern instructions at the Quilting Company but mine do finish at 3 inches.

this is a wonderful story of what inspired your little houses. I like the idea of planting morning glories to row up the sunflowers. I'm going to try that. I have a bush with thorns in the front yard and planted morning glories near it about 10 years ago. Those purple morning glories come back every year and have even spread to another bush. I'm wondering if you will stitch the houses you have made into one quilt. If so, will you keep each theme segregated or mix them up. I'm thinking of joining the RSC next year and make some of these little houses too.
xx, Carol

Love your stories as much as I love your quilts. Thank you for sharing.

Your time using the greenhouse sounds busy and worthwhile, and glad it even helped you in a way, when your husband was sick. Your stitched little greenhouses are a lot of fun!

Pretty greenhouses, thanks for sharing the story about them

I love reading your stories and memories, and I know your kids and grands will love them too! They are always a wonderful addition/backstory to the stitching. I truly believe you are a true renaissance woman!

What a story! I'm glad your husband came through okay and is still with you. Those green houses are lovely, and I love the idea of a sunflower house. What a creative idea!

That's a cheerful town, and a good story.
Life does have its turn arounds doesn't it?
I have to remind myself to stay flexible, I think that's what
'hang loose' means.
Thanks for sharing.

I wonderful story..just great...My man died of ALS so I know the drama of caregiving...I am raising my three grandchildren...thinking about that sunflower house...awesome xo

Love the story that you shared...it brings those green houses to life!

Thanks for the stories, Cathy! Your quilts always inspire me, and learning more about your life makes that even more special.

Wow, what a story, I'm glad you are here to tell it. I like the idea of Sunflower houses, might want to try that one. And I love all your little green-houses.

I enjoyed reading your story and seeing your beautiful green houses. I am sure that these times made you stronger as a family, and am glad that your husband is better now. I would have loved to have a sunflower house!

Nice story with a good ending. Thanks for sharing.

That old greenhouse did a great job, didn't it? Growing food and flowers, and then generating some green cash when you needed it. To everything there is a season :)

I also see a dog house, but, alas no cat house (probably a good thing). You have led an interesting life and it has given you many memories to cherish. These house are going on my list, but I really need to finish some WIPs before I start anew.
Pat

I just love all these little "green" houses and love the story that went with them, except for the part about your husband's illness and the greenhouse roof. It is so interesting to learn more about you and makes the patchwork even more special. I love any kind of minis and am thinking I might cave and start making some.

Thank you for your greenhouse story. Goodness you both must have worked so hard raising vegetables and herbs for sale. Love the idea of the Sunflower houses, very creative. Your husband had a long and difficult journey - you too as his wife and carer - wonderful to hear you both came through. Not surprising how hard you still work, turning out your beautiful Quilts. More super little Tacky Town dwellings.

I love your little houses, 3" very tiny! Your story is very inspiring. I am glad your husband is ok now and that you got the money for the expenses. Pity though, that the greenhouse caved in.

I hope you are saving all these stories and photos to put into a book for your granddaughters someday. They are priceless!

What a story! I'm glad that your husband is still ok. Loved the sunflower house story!! The greenhouses are darn cute too!

I'm glad for your husband and sad for your greenhouse roof and interested in that sunflower house! (I always wanted to try that, but hadn't thought of the morning glories!)
Love your adorable little ticky tackies!

You make the most interesting quilts and share the best stories to go with them. Honestly, you do.

Those sunflower houses sound AMAZING! Such a cool idea. I have never heard of that before. I love your ticky tacky houses.