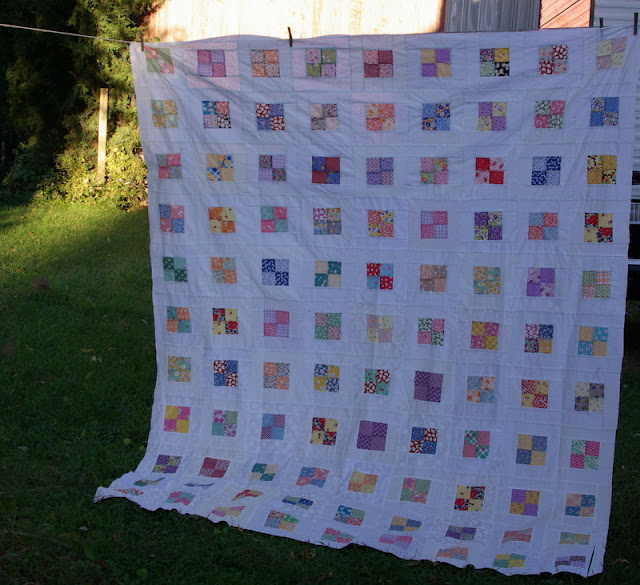 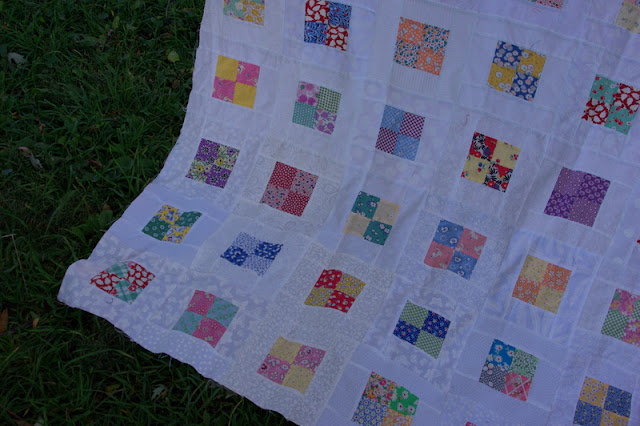 I had forty-four eight inch blocks from a 2007 swap- 30s fabrics in the four patches framed with white on white.  After I finished my Ocean Waves flimsy earlier this month I had a lot of 2.5 inch scraps left over so decided to move this UFO forward and made fifty-five more blocks for a twin sized quilt. I'm not really a fan of a lot of white in quilts anymore but decided I might as well get it to flimsy stage instead of letting the blocks sit around any longer. 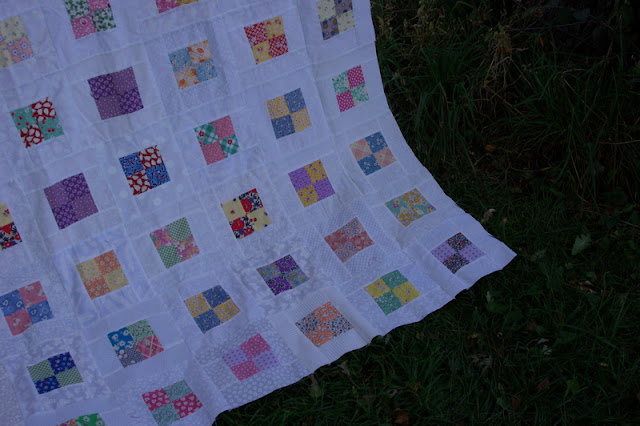 I put this on my list to finish before the end of the year. I was going to machine quilt it with vertical lines closely spaced. Now that I see it I think it would make a nice summer quilt - backing with no batting - with some minimal big stitch quilting with white perle #12 which I happen to have on hand and maybe a tie in the middle of the four patches.  So maybe it won't be finished by year end. 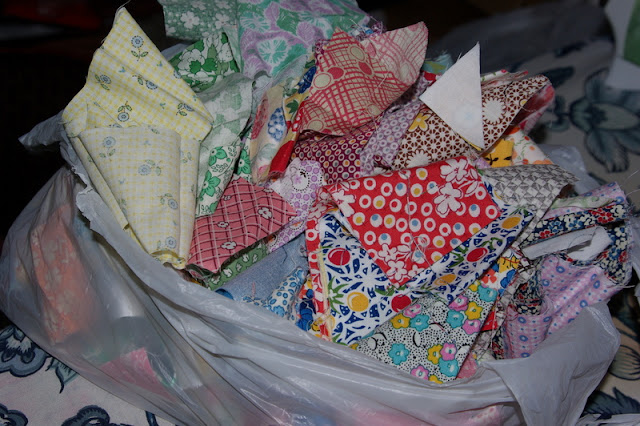 I still have a lot of 2.5 inch 30s scraps. I usually keep 30s and civil war repro scraps separate from other scraps. I guess they are a snobby bunch.  I'm considering mixing them in with the rest of the 2.5 inch scraps or I'll make some nine patches.

I do know I will cut a 1.5 inch piece off the end of each and make a few of these Whatchamacallits that I've been making as a Rainbow Scrap Challenge project.  I've been trying not to repeat any fabrics in these blocks and I haven't used any 30s yet. I want a total of 84 blocks and so welcome the new scraps to make these.

What a great way to set 4-patches--I have a WHOLE bin of them and may STEAL your idea...mine have been sitting around way too long...
hugs, Julierose

Another flimsy, great way to use those 4 patches. The other blocks are looking good too.

Again, your productivity amazes me! I agree that with all the white it would make a wonderful summer quilt :)

Great summer quilt with big stitch quilting, perfect.
So you have a 'snobby' group of scraps? Well it's best to have a sense of humor when
you have to work with them, as I'm sure you know!
Always good projects and inspiration here, thanks.

Oh it would be fun to go diving into that bag of scraps . . .

I've tried keeping my civil war repros set apart, but they keep sneaking in with all the other fabrics so I've given up.
And I bet some of us would pay you for a chance to come roll around in your scrap bags...