It's a Flimsy! Confetti Waves 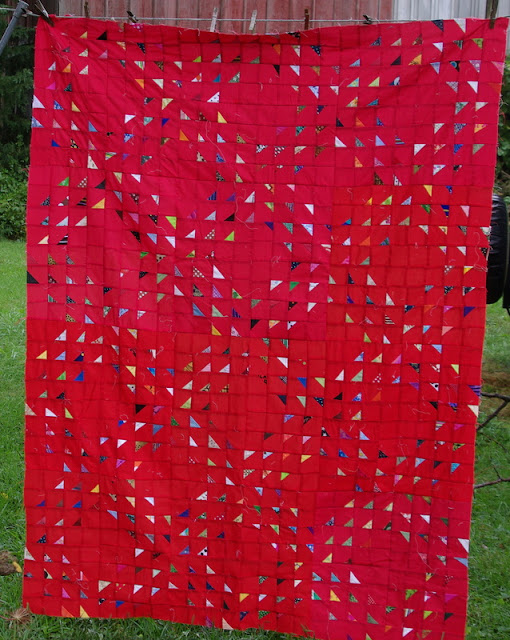 Ocean Waves blocks made of "waste triangles" instead of HSTs. 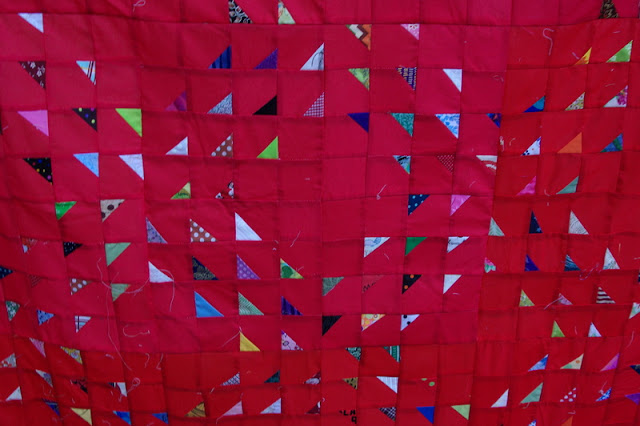 I just sewed a waste triangle to a corner of a 2.5 inch square and trimmed then sewed them together in the same configuration as the Ocean Waves blocks I blogged about yesterday.  It looks like these blocks have been around since December 2015.  I recently made four more blocks and then ran out of the solid red I had in with the blocks. So I guess that dictated the size of the quilt. It will be a donation quilt when quilted.

The red background makes the scrappy triangles shimmer! And congratulations on winning the Stashbusters UFO contest.

Oh wow! This is really cool and would be so much easier! Love it!

Another super quilt! I know how you work making lots of sets of different blocks at the same time but when you suddenly show two completed flimsies two days running I can't help but be amazed!

I agree with Nann, shimmer is a good description of your
confetti flimsy!

I love this one--super fun!

Now that's different, and really cute! I love it! I agree with Linda. ---"Love"

I like this a lot and it's a very clever idea to use the little scraps but then set them in traditional ways.

I love this quilt top -- I like this version of the design even more than the original! Congrats on a fabulous finished top!

Beautiful and so effective with the red background..sure makes your little triangles stand out!

Way to use those tiny little scraps!

I love the more openness of this (from the triangles being smaller and different sizes)! It looks really great.

beautiful! one of a kind!

Gorgeous!! Do you ever sleep? LOL