A Finish! Churns and Spools 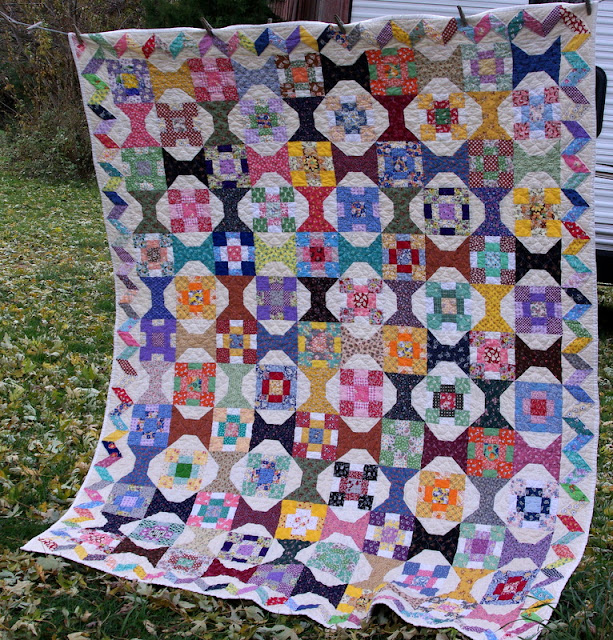 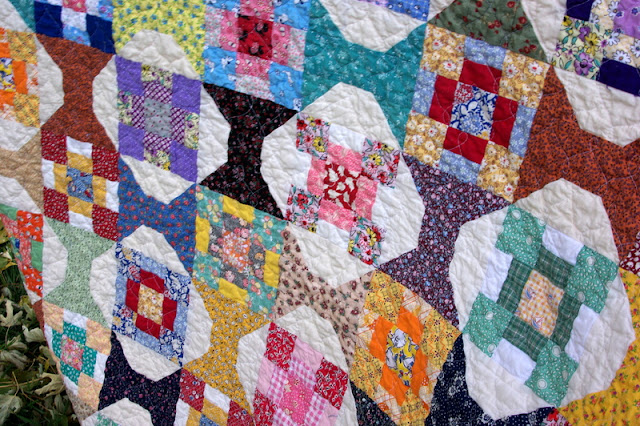 I can mark two UFOs off the list with this one.  I combined blocks from a calico on muslin Spool swap in 2010 and a Chunky Churn swap in 30s reproductions and a solid from 2015. 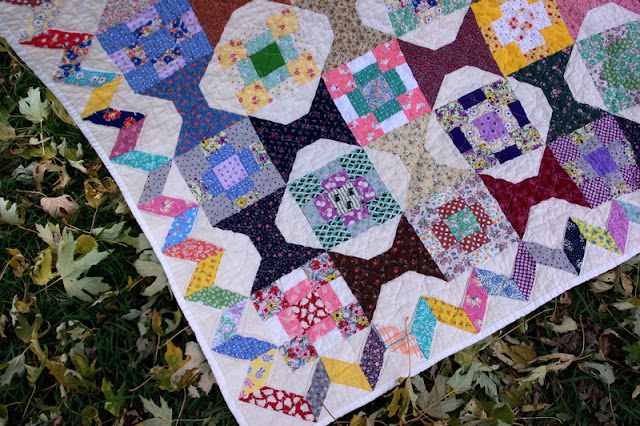 I usually don't add borders because I never know what kind of border to add. Plus I like piecing blocks so piece and piece until I have enough for a nice sized top which means I'm ready to sew a quilt top together. At that point I don't want to make a different block for a border. And I rarely buy large pieces of yardage to have enough on hand for a non-pieced border of fabric(s) and so I usually make quilts without borders.

HOWEVER this time I did not want to make more Churns or Spools to make the quilt a little larger  so I decided to challenge myself to add a border.  I decided to try an easy zig zag or rick racky looking border.    And all went okay on the first corner BUT... 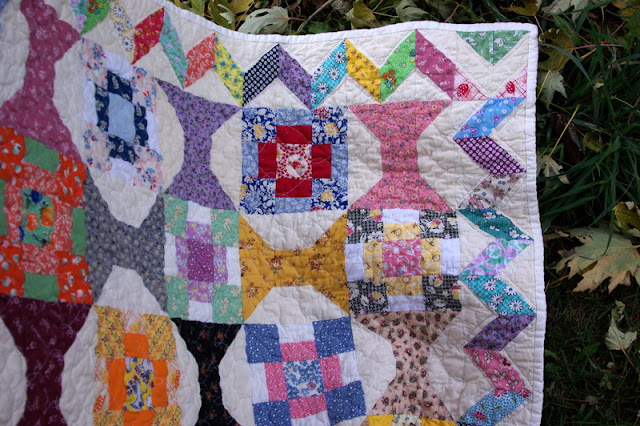 ... only too late did I find out at the second corner that those rick racky ends did not meet up so nicely no matter how hard I tried. Maybe if I had laid out the border on the floor ahead of time I would have seen the problem but I didn't so I had to improvise what to do on opposite corners. It doesn't affect the warmth the quilt will bring someone so I'm all right with that. 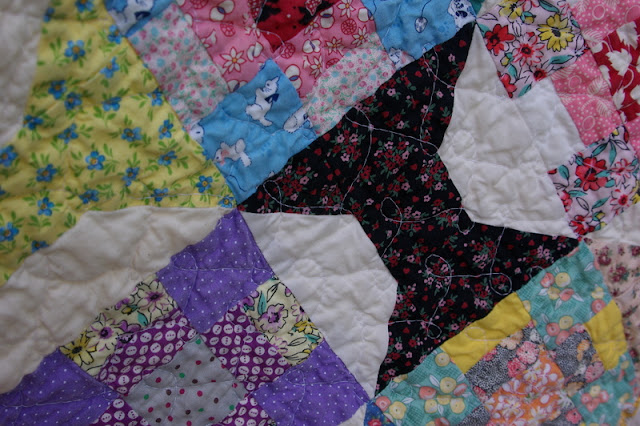 I didn't take a picture of the backing because it was cold outside yesterday when I took these pics but it is a plain white 100% old muslin sheet that I found new in the package at the thrift store with a J.C. Penney logo on the front.   With the quilting I did the back looks like a mattress pad.

You can kind of see the quilting on that black calico spool - a pattern of up and down loops using each 2 inch square as a guide (most of the time).  This was the first time I tried this. I found it pretty easy to do on these blocks laid out on a grid and may try it again.  This time I got a little confused every once in awhile when I hit the blank space on the spools.

I participated in four different Chunky Churn Dash swaps with different themes - patriotic, 30s, fall, spring.  I decided to challenge myself with different alternate block layouts for each theme.  So far I finished the patriotic themed one - a Quilt of Valor for my brother-in-law and this one.

This was my goal #6
for Q4 Finish-Along

This will go into the twin sized donation quilt pile.

Oh Scrap! at Quilting is More Fun than Housework
Posted by Cathy at Sunday, November 12, 2017

even if your corners didn't meet how you wanted them to it still turned out nice and used up some of your scraps. I have had corners do that too as I tend to plan quilts as I go which I know isn't the way to do it if you want perfection - but they are still fun to do and someone will love it for its quirkiness.

That is a happy and fun quilt! I like the design that was created around the churn dashes with the spools on either side, and I always think your method of stitching blocks together randomly works really well. Great finish!

I am one who would have put it on my design wall and stared, rearranged, stared and rearranged half a dozen times before sewing the blocks together! You are a brave woman! It turned out beautiful and love the scrappy nature of it! Great job!

Your quilt looks beautiful! I love the spools as alternate blocks; they make a great frame for the churn dashes.
Your scrappy quilts have a wonderful mix of colors that I find very joyful. That may be partly due to not using a design wall and keeping it random. Great job!!

Great Finish. I love the variety and the way a lot of the churn blocks kind of float in the white background, very cool!

What a great quilt! I like the way you combine secret stashes of blocks (from swaps or RSC etc) and come up with a delightful quilt. The border is lovely.

What can I say--another just beautiful finish ;))) I just love that your quilts "look" like quilts and the colors are so lovely hugs, Julierose

Wow, those two blocks look awesome together! This is a wonderful finish, congratulations!

Congrats! on knocking out two UFOs with ONE quilt. It turned out GREAT!!

Those two blocks look like they were meant to be together all along.

The quilters of old didn't worry very much about how their borders cornered up, and that is part of the charm of the vintage quilts we admire so much. Just call it a design opportunity taken and never look back! And this quilt is quite gorgeous by the way! I like your idea of just setting the blocks randomly rather than fussing endlessly with placement. That's the whole idea of scrappy in its truest form I think.

I love this just as it turned out!!!! Thanks for sharing your highs and lows ... and how your awesome quilt turned out when all done :D Kathi

Another wonderful blend, Cathy. The spools are a nice alternative to hourglasses. (Note to self: remember this!) The quirky corners work well with the scrappy, two-block design.

P.S. I agree with you about random block placement w/o a design wall. Otherwise you would still be rearranging the blocks. (In my experience I have the blocks arranged just so and somehow between the design wall and the sewing machine they flip around. )

I love how these blocks look together - and it's a combination I wouldn't have thought of! And, as usual, I'm so impressed with how your random arranging always works out. I would have been crawling around on my 'design floor' for days...

Love that quilt!! So cheerful! Your pieced border is fabulous! Julia

Spools make a great alternating block with the chunkies! I should adopt your "no design wall" strategy, I think. The process of laying out the blocks and rearranging them isn't the most fun part at all.

The corner blocks could be a feature, right? Two alternative blocks in a small sample of four total blocks? I'm glad you didn't let it stop you, because the quilt looks great just the way it is :)

Your quilt turned out great Cathy! I love how colorful and whimsical it is. I don't have a design wall either, so I lay the blocks out on the bed and keep switching them around until it looks OK. I also end up with a million threads on the quilt that's already on the bed. I wish I could just sew them together at random like so many other people, and not worry about like fabrics touching. I'm not worried about the quilt police. It just bothers me so much that I would need to rip and re-stitch, or my eyes would always go to that spot like a magnet. Did you get your sewing machine back, or are you still sewing on the Kenmore?

The corner is super cute, imo. Such a pretty quilt. It would have to go in the keep pile if it were mine!

Such a happy, colorful quilt. The corners are charming.

Whatever your process for putting blocks together it works beautifully.
Perfect border, happy and not obsessive.


What a very pretty quilt.
Kay.

Beautiful finish and I LOVE the border! Corners, schmorners! No one would know you didn't mean to do it that way unless you pointed it out to them. I think this quilt is a stunner.

I thought I left a comment but I guess I just thought about the quilt instead of writing a comment. Vibrant and beautiful! I'm impressed that you're able to create quilts without using a design wall -- and have them turn out so great. If I were to do that all the reds (or some other color) would end up in a clump in the corner and the rest of the colors -- well, who knows how the colors would be arranged, but I know they wouldn't look as great as this quilt does. Gorgeous!

Often a cornerstone placed in the border will help things finish up so the opposite corners will match and balance out the inconsistency..love this quilt. Might need to add this one to my bucket list.

When I saw the photo of the quilt my first thought was that I love the border. After reading your post I love it even more. ;)

You are so right. The corners don't make a bit of difference in the long run. It's very cute!

Lucy | Charm About You said...

What a gorgeous quilt! The layout and borders are stunning! I like imperfections in quilts it makes them truly unique :) Thank you for participating in the FAL, on behalf of the 2017 global FAL hosts.

Oh my goodness, this is gorgeous! Do you mind if I pin it to my Scrappy Quilts Board on Pinterest? So inspirational!