Out Of The Orphanage And Into A Quilt

It's been a whirlwind couple of weeks with lots going on (I won't bore you with all the details) but I'm hoping now life can get back to normal and I can get back to my quilting and gardening and life of a hermit.
It's been too hot the last couple of days to work out in the gardens so I worked in the sewing room. This month I wanted to work on orphan blocks. So far I have made four donation quilt tops all about 40 x 60 but I have miles of orphans to go before I sleep. 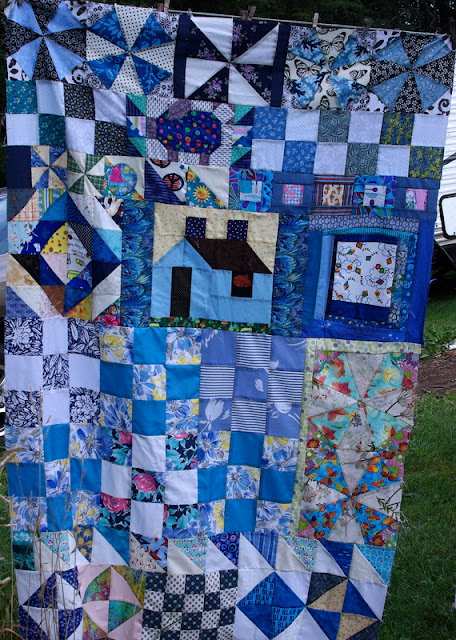 Blueberry Cobbler
For this one I used, as you can see,  mostly blue blocks. 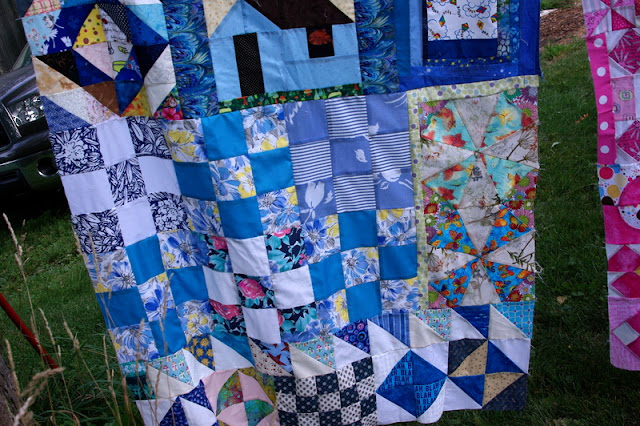 The blue nine patches came in a box of goodies a few years ago from a quilty friend. The kaleidoscope blocks were left overs from a Kaleidoscope of Butterflies quilt I made long ago. Some of the other blocks are odds and ends I sometimes make when I have bits and pieces left over from making a quilt. 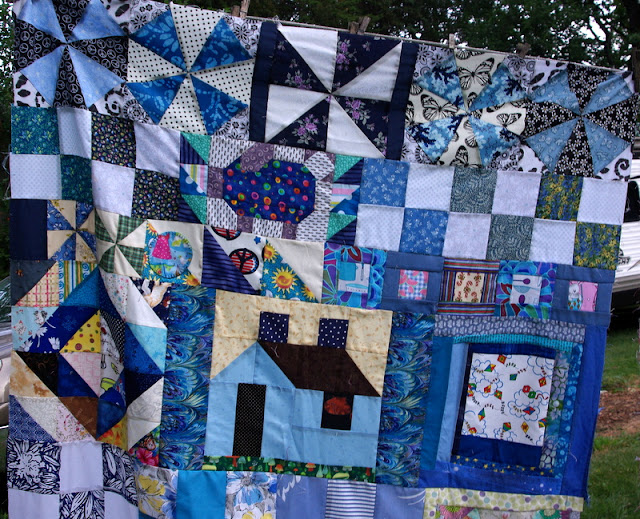 At the top are kaleidoscope blocks that I tried out with black and white backgrounds and did not like. There's a pig from friend Gayle, a Depression block leftover from a quilt I gave as a wedding present. I made a house and decided I did not want to build any more houses in that style.  There's some little four inch I Spy blocks left over from a quilt I made for a new grand nephew and a wonky log cabin leftover from making a donation quilt in 2017 that went to Wrap-A-Smile. Years later I saw a cute little boy in a foreign country wrapped in that quilt who had undergone a surgical procedure. 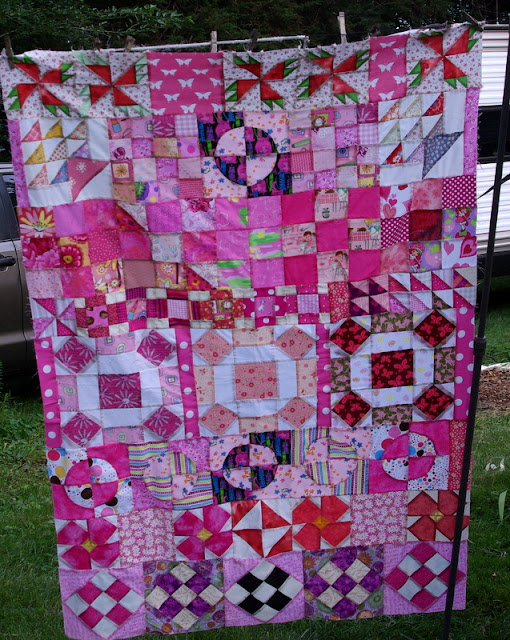 Pretty in Pink
You guessed it! I used mostly pink blocks in this one. 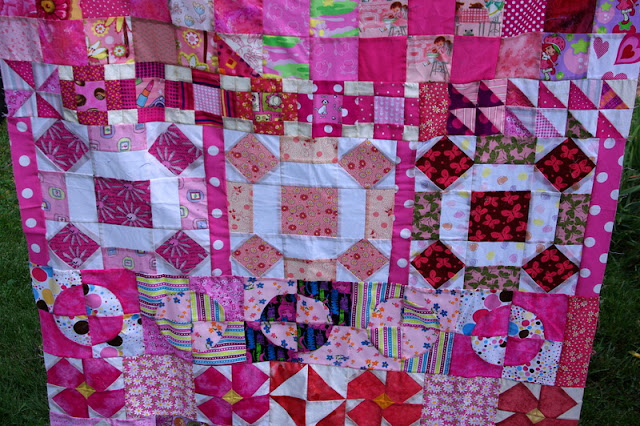 The Rolling Stone blocks were left over from two different quilts. The Drunkard's Path blocks came to me in pieces from a friend a couple of years ago. The Posies were supposed to be for a swap but before I sent them I realized I had cut my center pieces a little too big. Rather than rip and remake I just threw the blocks in the orphanage and made new ones for the swap. 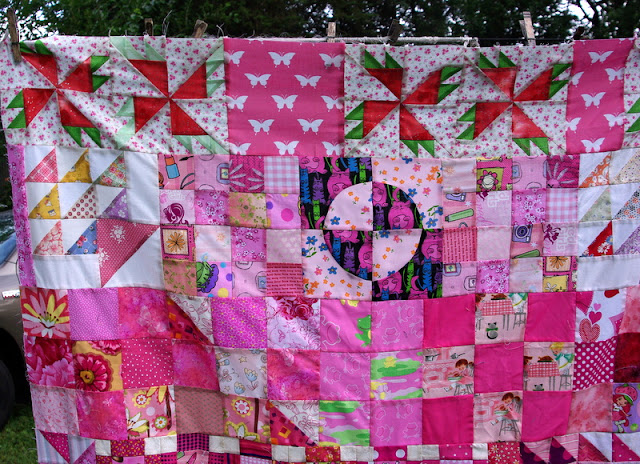 I made the Rosebud blocks on the top for a six inch block swap but they didn't turn out at six inches so I kept them and made a different six inch block for the swap. The Basket blocks were swapped and left over after I made a quilt. 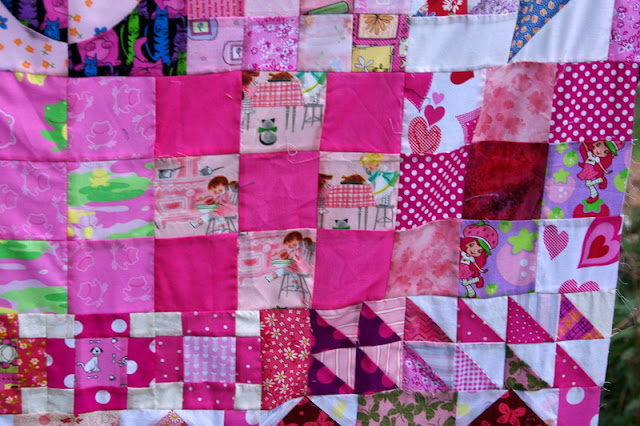 I made my granddaughters aprons when they were four years old with the fabric with the little girls cooking in the kitchen. They also got Easy Bake Ovens that year and I think after that year the ovens were discontinued. I know I made the granddaughters something with Strawberry Shortcake fabric-maybe pillowcases. I think my daughter still has her Strawberry Shortcake doll! I wonder if it still smells like strawberries. 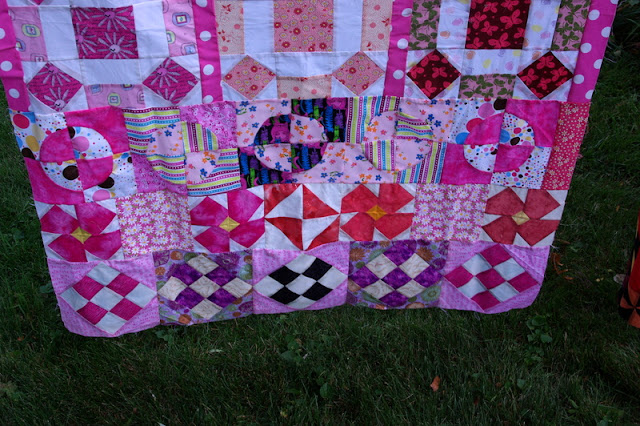 The bottom row consists of swapped Country Nine Patch blocks left over after I made a quilt a long time ago. 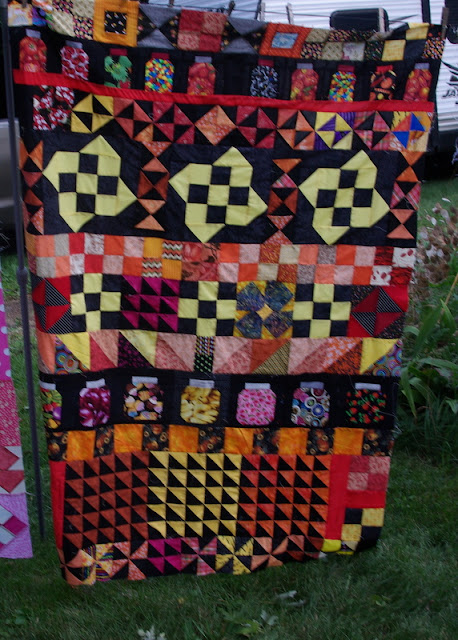 For this one I pulled out blocks with black backgrounds and warm colors. 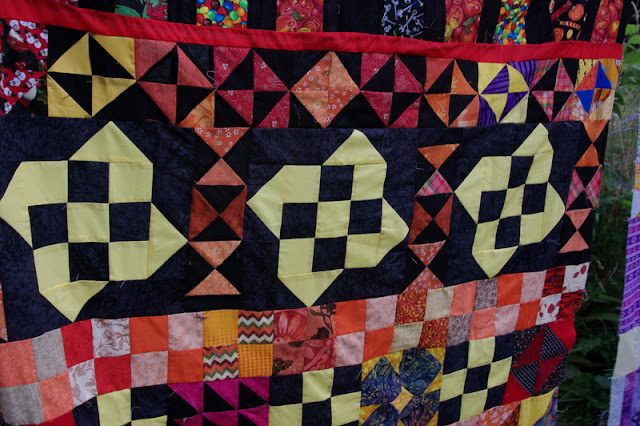 I made some Rolling Nine Patch blocks for a swap that was later cancelled. The Four Patches came from the Parts Department. 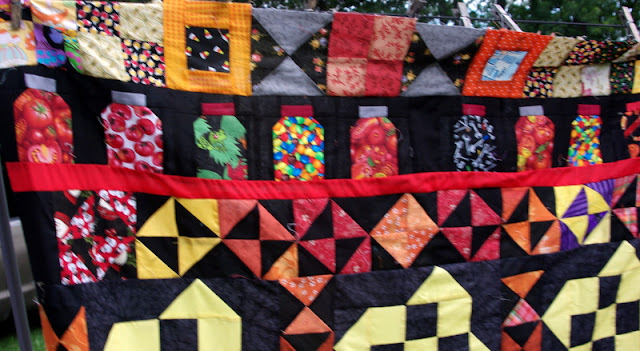 I went crazy filling Jars a few years ago. I made several Jar quilts but still had some left in the pantry. 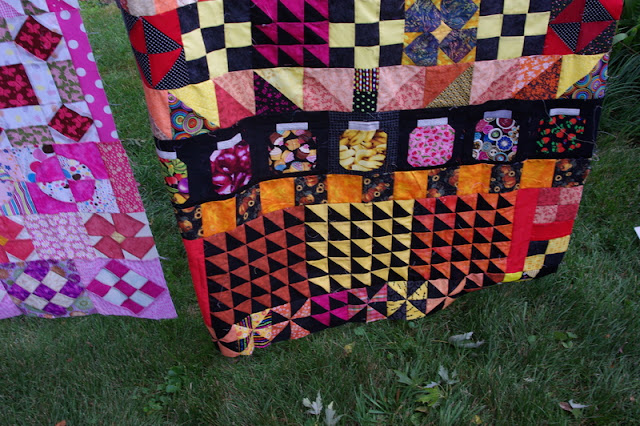 More Jars in a different size. The 25 patch HST blocks were made from waste triangles a long time ago. Time to use them! I cut apart a 16 patch block to make the row with pumpkins and sunflowers alternating with orange solid. 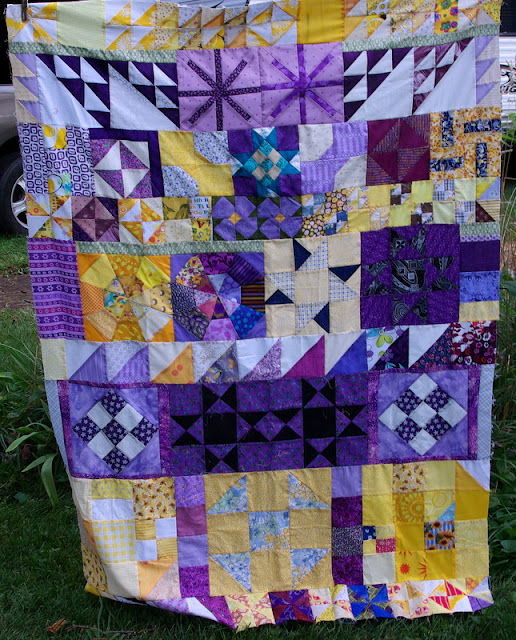 And finally here's a top made with purple and yellow odds and ends. 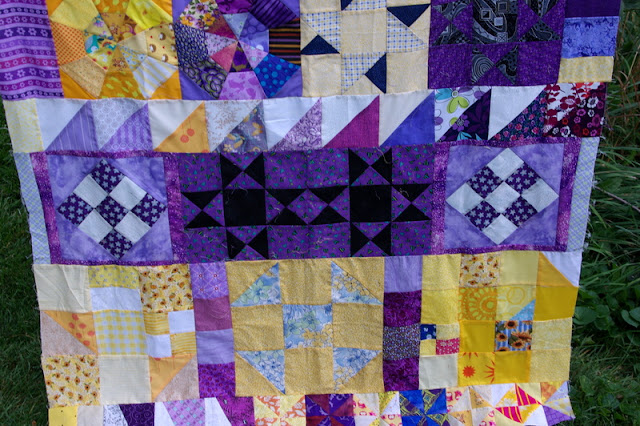 A friends sent me the purple/purple Ohio Stars in a box of goodies long ago. A different friend sent me the big Shoofly block. I spy a couple more Country Nine Patch blocks that were left over. 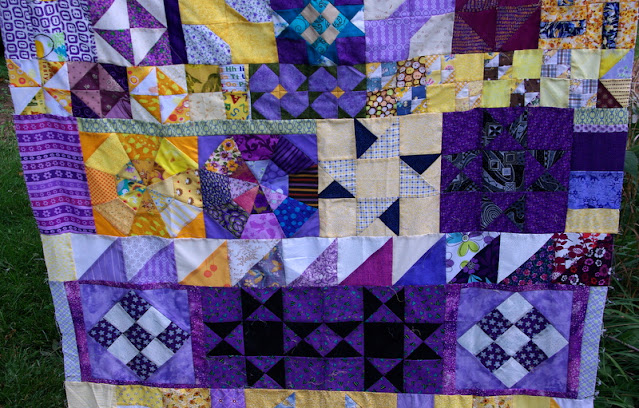 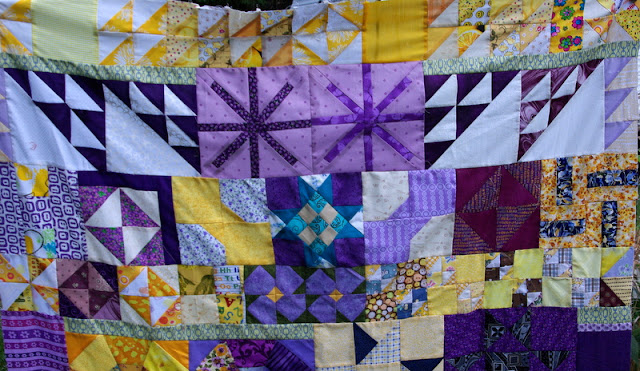 The Birds in the Air blocks were won in a block Lotto and left over after I made quilt top a few years ago that is still in the to-be-quilted pile. A few of those particular blocks had the points cut off so I put them in the orphan box. It's not really all that noticeable in an orphan block quilt.
I think this meets a bunch of challenges!
This month the Stashbusters challenge is to use orphan blocks and parts.
The latest AHIQ challenge is to make an asymmetrical quilt because I normally tend to make symmetrical quilts.
I made it my OMG (One Monthly Goal) to make at least one orphan block top this month.  Mission accomplished so at the end of the month I will link up with the OMG linky party at Elm Street Quilts.
I'm hoping to put a couple more orphan block tops together before month end. Stay tuned!
Finished or Not Finished Friday at Alycia Quilts

Way to go, using up the orphan blocks! I did that last winter and it is such a feeling of accomplishment! I look forward to seeing how many orphans you use, happy stitching!

I think orphan block quilts are so much fun to look at. I don't have as many blocks in the same color range as you do so I ended up dividing by batik, Kaffe, and all other printed fabric.

My orphans are all such different sizes - yours seem to sit together so well. WOW - yes, you surely did meet all those challenges and more!!!

What pretty bright quilts. Good using up orphans. More room for new tops. I like the pink and rusty ones i think the best. You always have so many to choose from!

Wow - you were quite productive during your blog hiatus. I kept checking to see if you had a new post. Sandy at sewhigh.blogspot.com

Wow! You certainly did have a bunch of orphans! And more still?

I don't really have a lot of orphan blocks, but I do have a lot of projects where the blocks were made, but never put together? Do those count as UFO's or WIPs? Too hot to sew right now.
Pat

Glad you’re back to blogging - I’ve missed you. Lovely bright collection of flimsies using up so many orphan blocks. Those jars are great, such a lot to look at. The purple and yellow top, Row 4, two pretty little flower blocks with 4 purple petals and a yellow centre. Can you tell me the name of that blocks, please? I would love to make some of those. Thank you!

The quilts are really fun! I love that you included the origins of the blocks. They are all pretty, but the quilt with the black fabrics has stolen my heart. The jar blocks really make it a standout.

I love that you call it "the orphanage." A lot of great quilts from that bin!

OMG have you spent some time emptying the orphanage! Every one of these is AWESOME!!!! Great work, I mean therapy :-)

Great Job! I'd call that one with the jars Cannery Row. giggle What a very full orphanage you had. Glad they found a place to live and nurture someone. I find it amazing that you made a quilt and then later saw a photo of it wrapped around a little boy in some far away country.

Oh my! I adore orphan block quilts!!! So interesting to look at!!! and that you remember where they came from is even more amazing! I cannot imagine how good that felt to see your quilt hugging that little boy...

Awesome orphans, Cathy!!! Those quilt tops are sure to bring a smile to their recipients.

All those challenges met and you've still got more than half the month left over! Wow!
(I spotted that piglet right away!)

Every last one is wonderful!

These all look fantastic Cathy. Now you have me thinking about my orphan blocks.

Magnificent collection meeting the OMG and Stashbusters challenges!!
I love the colours!

You run the BEST orphanage!!! these are all so great!! and wow!! you met a ton of cool challenges!! now I want to dig into my Orphan bag!!

Your orphans look wonderful! The intensity of all-one-color makes these stand out. (And I recognize those violet flowers. They keep turning up, just like real violets do.)

Wonderful! Thanks for linking up with Elm Street Quilts One Monthly Goal and congratulations on your finish.