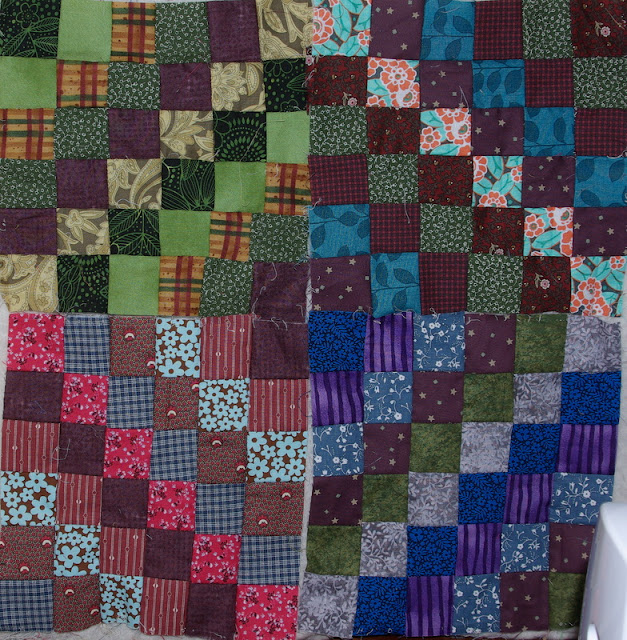 I was clearing off my cutting mat because it was once again almost completely covered with scraps.  I found a lot of scraps 2 inches in width. Since I have not yet emptied my 2 inch width scrap bin I was just going to throw those scraps in the bin. But I didn't. I remembered I'm trying to use scraps as I go and not put them into a bin. I sometimes make Four Patches when I have 2 inch scraps left over but it sure seemed like I would have to make a bunch of Four Patches I didn't really feel like making at that time. So... I had just recently seen Ann's (Fret Not Yourself) lovely Trip Around The World (TATW) baby quilt and so it was on my mind. I've never made a scrappy TATW.
I noticed most of the pieces on my cutting mat were dark. So I also dug around in my 2 inch scrap bin for anything long enough and dark enough. I cut pieces 2 x 13 and made my blocks similar to Bonnie Hunter's tube method except that I don't iron my pieces in the tube before cutting into sections, my sections are cut into six 2 inch pieces and I build my blocks in a different way - the top starts the diagonal and not the bottom. 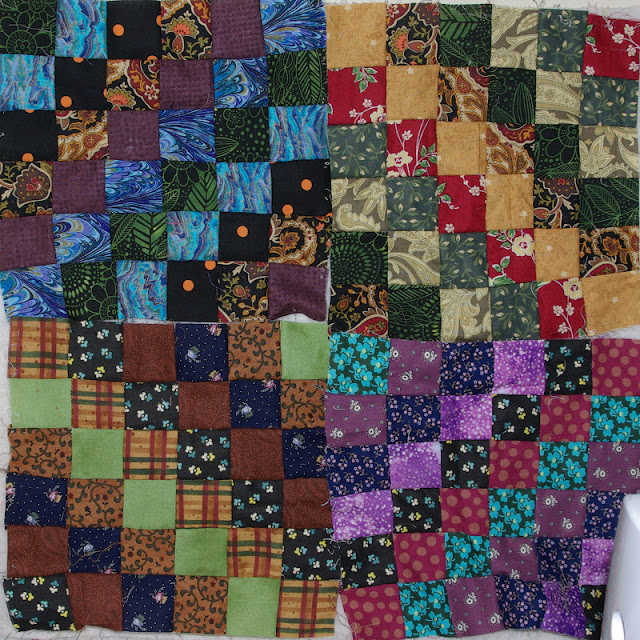 Like I mentioned...I decided to use mostly dark colors. With the scraps on my cutting mat plus the ones I pulled from the 2 inch width scrap bin I was able to make 12 blocks that finish at 9 inches. 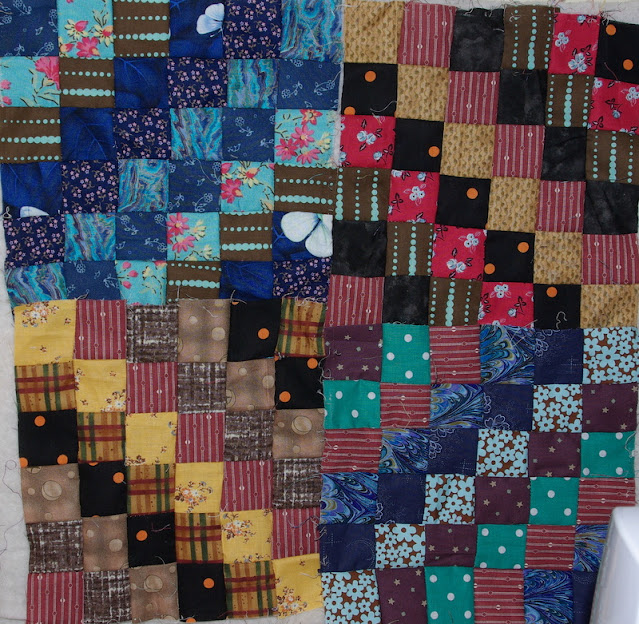 I think I would like a quilt with blocks set 6 x 8 so I still need quite a few blocks.
My next step is to go through a large box full of quilt back trimmings to see if there are any dark pieces I can use. I was going to go through the box anyway to make up a bunch of scrappy 2.25 bindings because I think I'm going to have a quilting marathon in September and will need yards and yards of bindings.   After I clean up the box of quilt back trimmings I will see how many TATW blocks I have and then will decide what to do next. 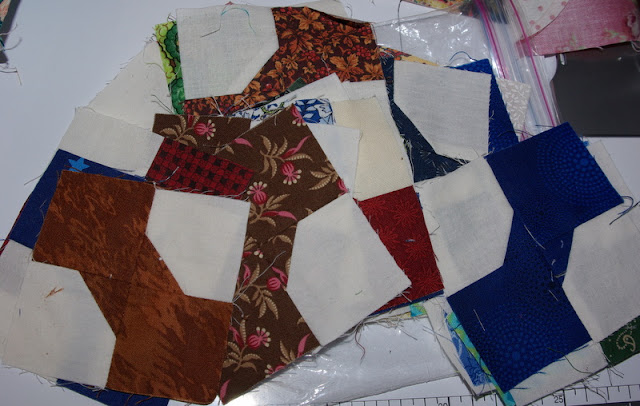 This month while I was going through my orphan block boxes I found a baggie of 40 Bow Ties that finish at 3 inches. I think these were from a swap long ago. It looks like we used muslin for the backgrounds. 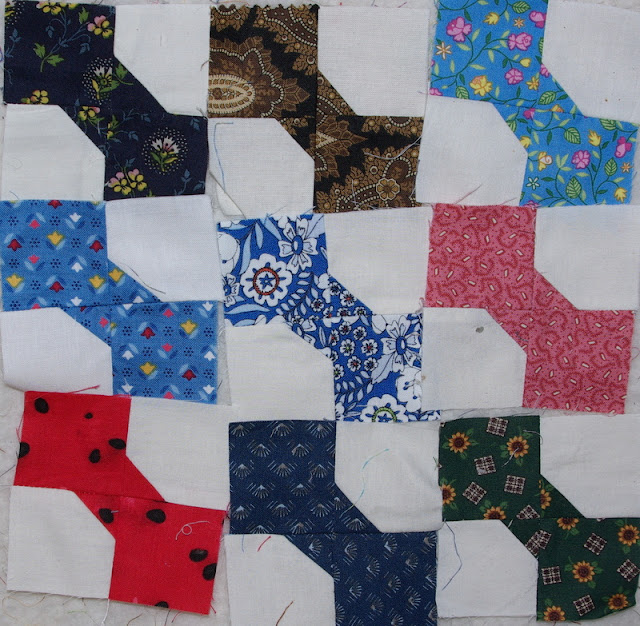 Well, now I think I found another project for two inch scraps. They are kind of like the Four Patches I've been making for the Parts Department but have wings added. This will probably roll into a Rainbow Scrap Challenge (RSC) project and I'll probably make a large quilt. I'm not sure I'll be able to stick with just plain old muslin for the backgrounds though.
So, anyway, perhaps these two projects (and one other I have in mind) will now help me clear out the 2 inch width scrap bin.
Posted by Cathy at Tuesday, August 31, 2021

I like your scrappy trip. I have one in process not quite done in Bonnie's way. I also finished one and have to web one made in alefthandedquilter.blogspot.com way which I love called Upstairs/Downstairs. Next time I will work the diagonal like you did. Thanks!

Oh my goodness, so many lovely projects on the go. I think we need a few photos of those boxes that need “cleaning out”, another treasure trove I would imagine.

I've always wanted to make a TATW quilt, but haven't managed one yet. Your super scrappy blocks are going to make a lovely quilt, Cathy! Nice job on using up some more of the scraps on those Bowtie blocks.

I really like the TATW! It really is better to sew up the scraps instead of putting them in the box. they multiply in there.

How inspiring and brave! I enjoy all the piecing and scrappiness going on here.
Thanks for sharing!

What size are your bowtie squares- 2"? And the smaller squares? I always wanted to try a bowtie quilt and 3" finished sounds good. Also, it would be a good leader ender project.