#AloneTogether in Little Houses Made of Ticky Tacky 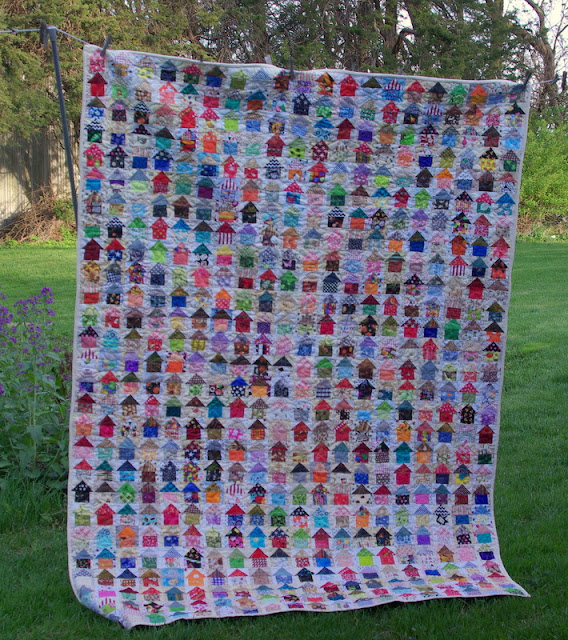 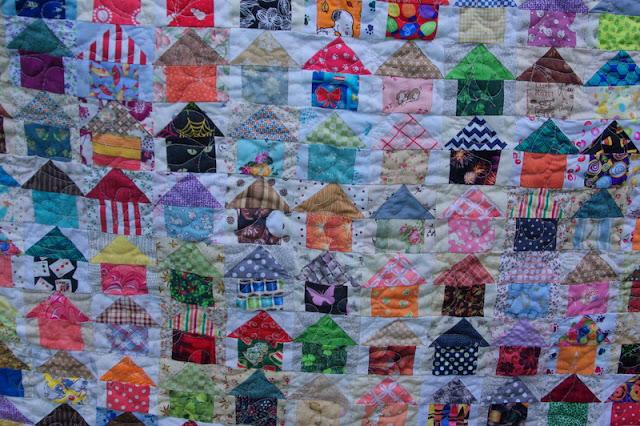 I began making the houses back in July 2018. I was inspired by a Quiltmaker Itty Bitty block called Home Sweet Home.  I say inspired because I made my blocks in a different way but they finished at the same size.   I thought it would be a fun way to use some novelty scraps. Then later on it became a Rainbow Scrap Challenge project and I made houses with 2 inch scraps in the color of the month. 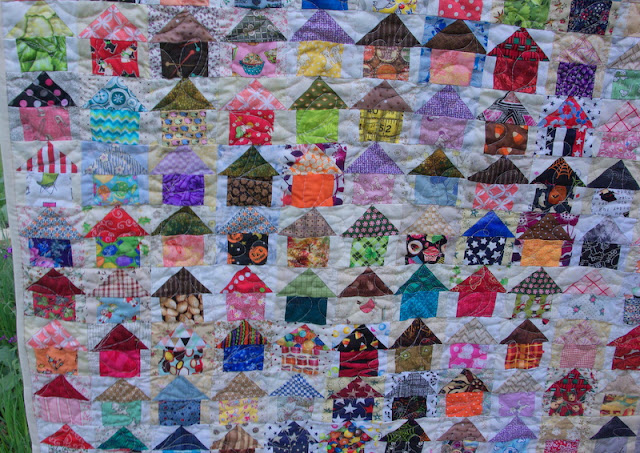 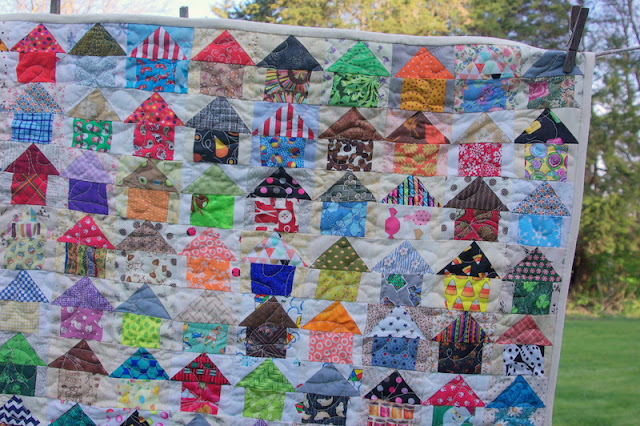 I added #AloneTogether to the title after the social distancing campaign and mandate to shelter in place during the COVID-19 pandemic.  (Ooops...I forgot to add a label to this quilt with the title. I wouldn't want to forget this time in my history. ) 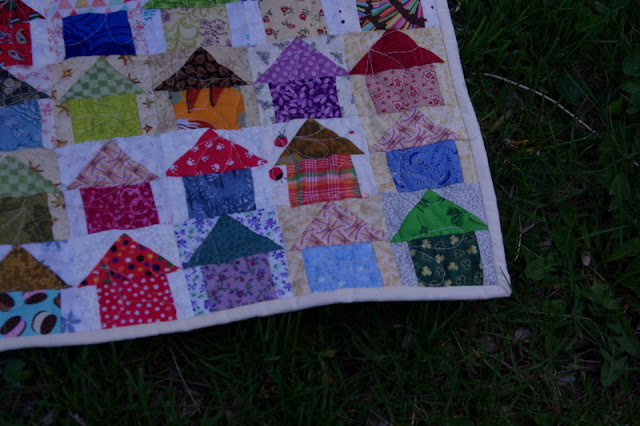 I'll probably put this quilt in my camper. We sometimes have large family reunion camp outs and there are times when there are lots of little kids around. I've found that sometimes an I Spy type quilt is a fun thing to pull out when the kids get restless. With this one I can ask which house they would like to live in and why or have them pick a house and tell me a story about who lives inside. 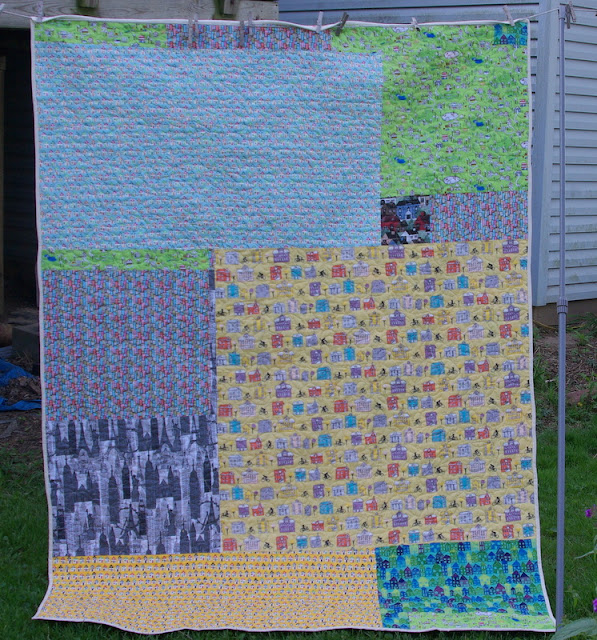 I quilted it on my DSM with little three petaled flowers.
This is the pieced back. 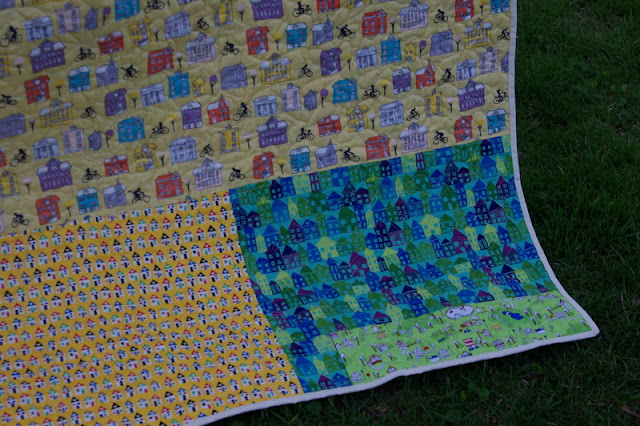 I've had these house fabrics for ages. I've cut into some of them with smaller prints a few times but I never wanted to cut into the ones with the bigger prints. When I started making the Ticky Tacky Houses I put them aside for this backing. 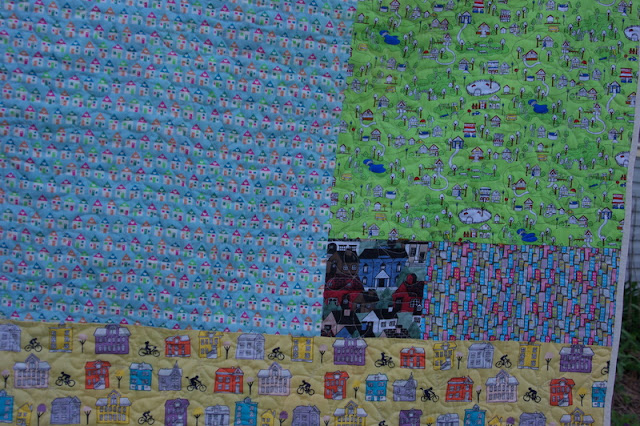 I even found a 6.5 house in some swapped I Spy Squares that I added in. 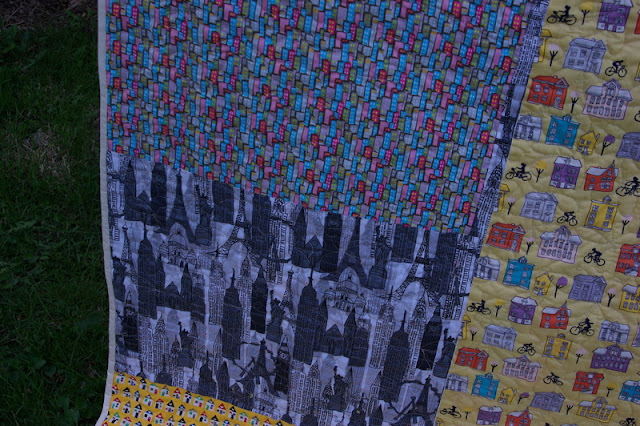 And after I ran out of house fabrics I dug into the travel themed fabrics and pulled out a big print of buildings to fill in.

So fun! I love the various house prints on the backing.

So stinkin' cute! I"m inspired. I love house quilts and the idea of MAKING the little ones appeals to me but...putting them all together...not so much!

I have loved following your journey to make this quilt. It is WONDERFUL! You are so inspiring. Love, love your blog and your work.

Great quilt and I love the backing too! Hmmm travel theme fabric I'll have to see what I've got. Those large scale prints look so great on the back! take care.

OMG how is it even possible that you have finished this quilt already?!?!
I love these photos... made them as big as I could on my computer, put on my highest strength glasses and stuck my nose right up to the screen to see every detail...I adore it!
And it's so fun that it will be enjoyed by little people in a creative way!
You are a quilting rock star!

Oh such fun little houses. The back is a wonderful surprise. I try to "theme" fabrics in backs sometimes too. It's usually just florals or dots or kids fabrics. What a great selection of pieces you had for that back. Congrats on your fun finish.

The grands are going to love exploring all the houses and making up stories about them. Of those that I can see clearly, the cupcake house would be where I would live lol! I'm glad you're keeping this labor of love for yourself!

Love, love, LOVE how you matched the theme of the back to that of the blocks on the front of the quilt!!!

so much to love about this quilt:) and of course your patience is endless! wow simply a work of love;) thanks for sharing

Love the quilt and the song!

Wow! 540 little house blocks make a wonderful quilt! I would be just as entertained by it as the kiddos, I think.

I love your little houses! After being in my house for 7 weeks, I'm wanting to make a house quilt, too.

By the way, Pete Seeger sang "Little Boxes", but it was written by Malvina Reynolds, who also wrote "What Have They Done to the Rain?" Dot

Absolutely love your quilt. Ticky Tacky houses are great. Any chance of your variation on your blog? Please?

I’ve thought that a house block quilt would be a good commemorative type quilt. I’m behind already....and even though our state was one that never had a formal stay at home order, the “ recommendation “ is being lifted this week. Luckily we have only 429 confirmed cases, 146 probable cases, and 7 deaths, to date. DH and I are older, so in the at risk group. We will continue to stay home & wear masks when we have to go out, we don’t have financial issues either..being retired.
Think I’m going to go check out a house block!

That is toooooo cute! I'm doing a house quilt as my Quaratine Quilt, but I love these tiny houses, too.

What a great top and such a fun back!

Love love love your little.e houses, such a great quilt! I've been doing a bunch of little house blocks as leader and ender sewing, still need to assemble it though. These little blocks are fun to make, aren't they?

And even the back is fun! I can see kids being entertained for hours and hours by all those little houses!
Label it for sure - it's a part of family history and deserves to be known by its name!

There must be a gazillion little pieces in that quilt! It turned out really cute! ---"Love"

Oh my these houses are tiny!!! Love quilt and I always love to see pieced backs to our quilts.

Love those Ticky Tacky houses! I'm glad you're keeping this one.

What a marvelous finish - and perfect for a pandemic quilt. And I love the lyrics that inspired the quilt's name.

Absolutely love it! What a great idea for camping with kids!

A label is good, but I bet you never forget this time in history! :)

540 teeny, tiny houses, huh? Well, I know I don't have anywhere near that many done. Maybe mine will wind up being a border on a quilt. But they are fun.
Pat

I love this. Seeing it all finished makes me want to make one.

So many cute little houses--I know I couldn't stay motivated to make all those! Fabulous finish!

oh it wonderful and better than I imagined - congrats

I love your house quilt! I would really like to make one and am was wondering if you would share what you did differently to construct your houses. Thanks!

That is such a FABULOUS FINISH!!! I can't imagine making 540 tiny 3-inch blocks. I love it so much!

Wow, that’s absolutely the best little houses quilt I’ve ever seen! I guess I’ll have to add it to my bucket list of Must Makes! Congrats on a super finish!!

Wow, this turned out FANTASTIC! I love all the houses! All of them! This is so fun! And I love the idea of using it as a place to talk to kids; your question ideas and "tell me a story about who lives there" is awesome! I think I want to come to your family reunion camp outs!

What a perfect little bitty block quilt! This just looks so happy.:)

It's such a terrific (and aptly named) quilt and I love your idea for how children can enjoy it. What a perfect project to incorporate novelties. Fun backing too.

Cathy, this quilt has so many memories for you plus you've found a way to use it to create more memories for your family. The fabrics for the back just add to the fun. I think I need to make some houses soon. Thanks for inspiring us all. Congratulations on another wonderful finish.

Thanks for the link! I went on a squirrel hunt and found lots of lovely bitty blocks to enjoy. Such a happy quilt. Congratulations on the finish.