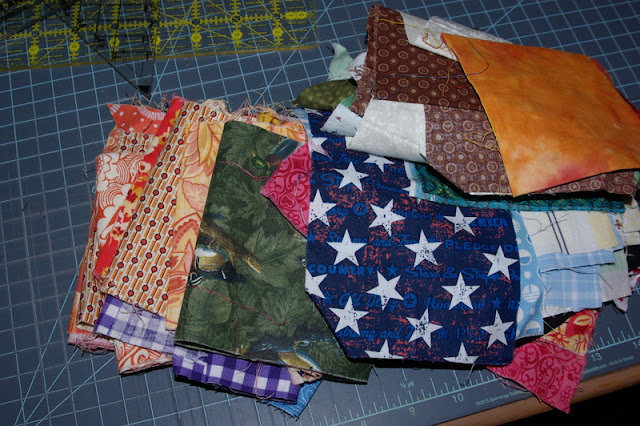 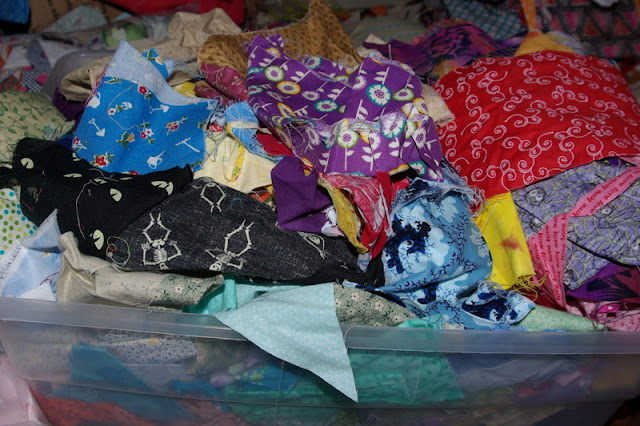 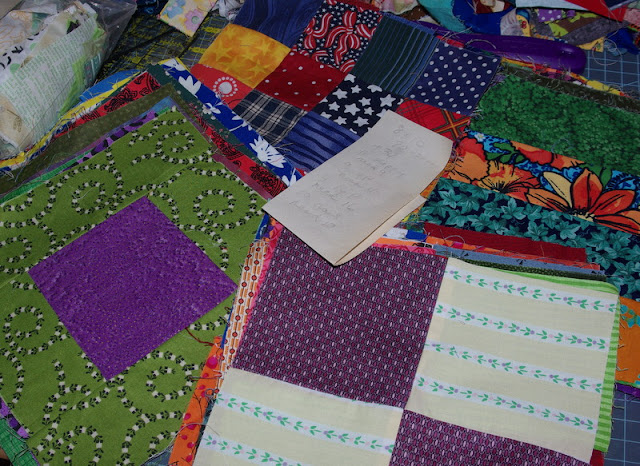 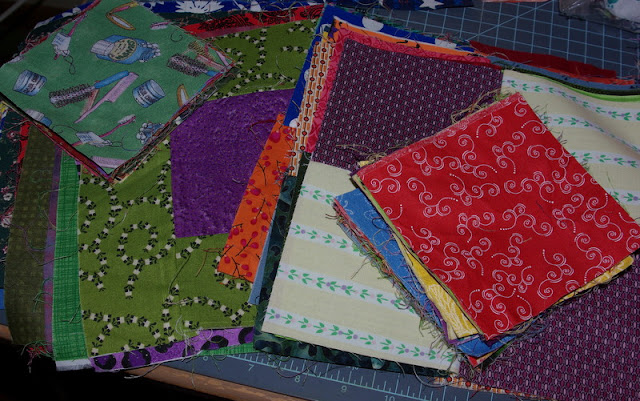 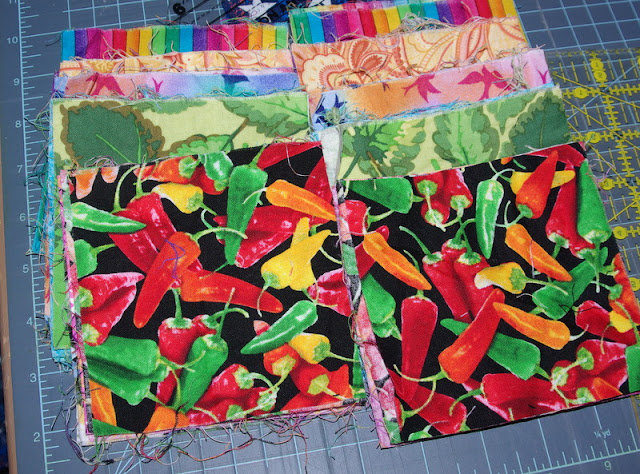 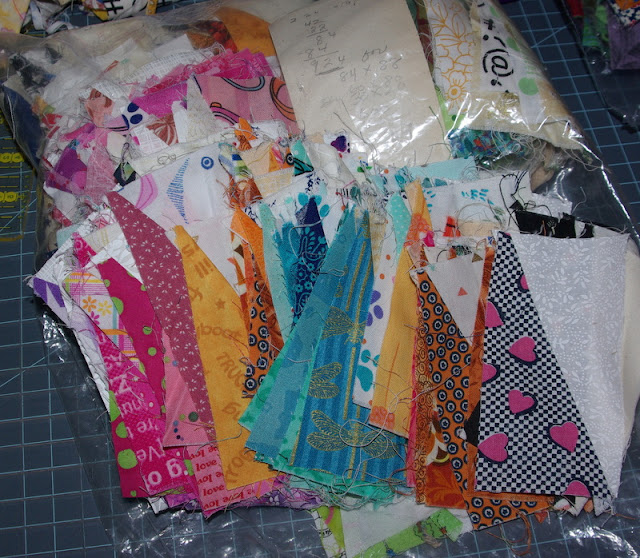 Then I found a bunch of HRTs made from 4.5 inch scraps. I made these parts one year as a Rainbow Scrap Challenge project.  As I made them I didn't know what I was going to do with them - I was just using scraps.   I decided I will make a quilt 60 x 80. I need 600 HRTs for that. I counted what I had and the total was 452 so I need only 148 more HRTs. 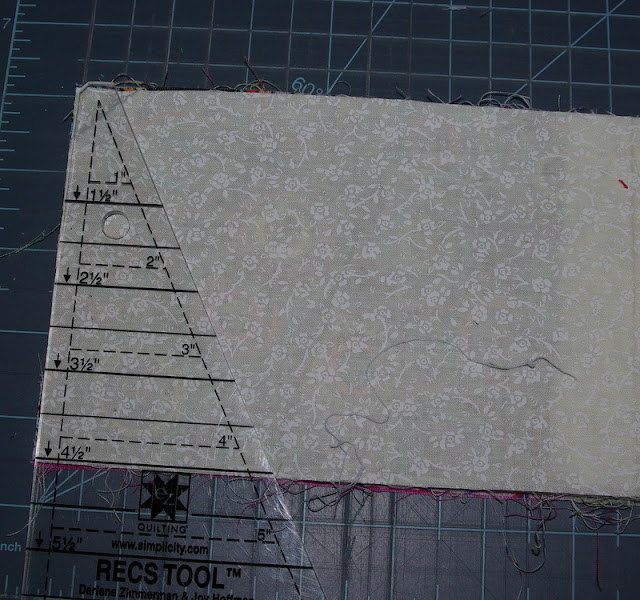 Using 4.5 inch scraps I pair colored scraps and low volume scraps stacking them all face up then I use a Tri Rec ruler to cut the pieces. 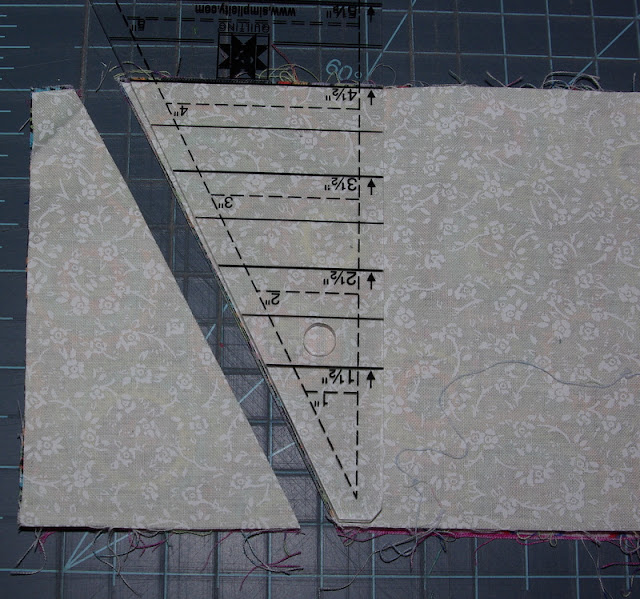 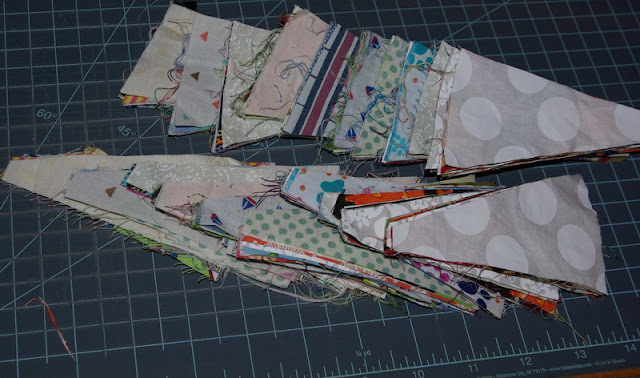 I'm not sure how many HRTs I cut but I'll sew them together then count. I used most of the green, blue, orange scraps  (already called RSC colors) and all the scraps on the table for these HRTs. If I need more I will follow along with the Rainbow Scrap Challenge colors to make them until I have enough for my quilt. 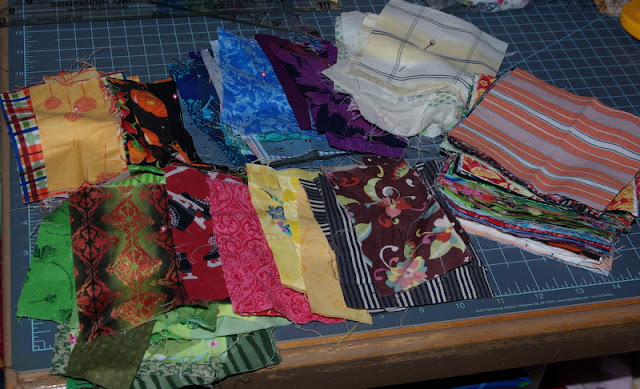 Then I finished up by cutting 4.5 inch squares for a project to be determined later.  I'm trying to clean out all my scrap bins I keep by width by cutting all the scraps into squares this year.

Any pieces less than a 4.5 inch square and wider than an inch will get sewn into strips and combined with other strips for a Chinese Coins quilt at year end. 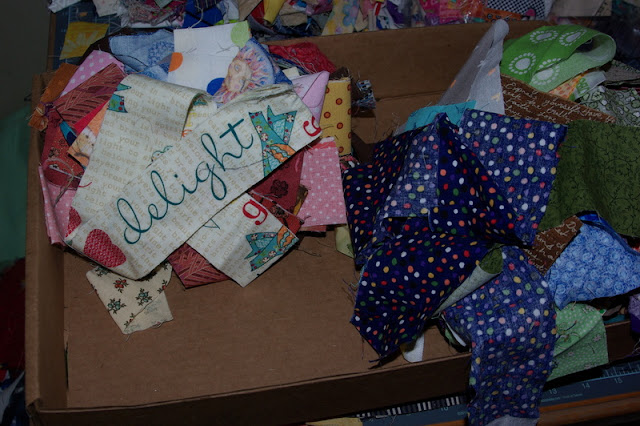 Now I think I will go sew for a few days before I move on to those piles of 2 inch scraps and 2.5 inch scraps that were on the table and cutting mat.

Monday Making at Love Laugh Quilt
Posted by Cathy at Monday, May 18, 2020

You are doing a great job of processing your scraps! Not sure how much remains to be cleared. I see SEW much of the cutting mat now!!

So interesting to see how you are dealing with all those different scraps. Very methodical approach which is bearing fruit as you build up blocks to finish those UFOs.

Good grief! After reading about all that cutting, I'm worn out, and I didn't even pick up my rotary cutter! Looking forward to see what you do with all those pieces next week! ---"Love"

You are so amazing with how you keep on making great quilts! I loved your post title!

you are a scrap user inspiration to us all!

Interesting to see how you sort and use your scraps. I'll need to remember to use the Tri Recs ruler to cut HSRs. I love the look of them and it would be something different to try. Unfortunately, I can barely see my cutting mat as it is, as there are so many projects going on.

That HRT quilt is going to be so gloriously scrappy -- I love it. Good for you for filling in on projects that need parts - makes it easy to pick them up and sew when you have time or energy.

This HRT method looks so much easier than the diagonal line on 2 rectangles. It makes a lot of sense.Thanks for the idea

You are always so organized. I use Chinese Coins as my final way to clear the scrap bin, too. But I've never seen your Tri-Rec ruler. I've always figured the measurements myself. This looks much easier so I may have to buy one. Thanks.

Oh my goodness, you have been busy! And so organized too! You are an inspiration to me! I'm not sure I could keep track of so many projects at one time.

You are being so industrious! Organization is a good thing to occupy ones mind with!