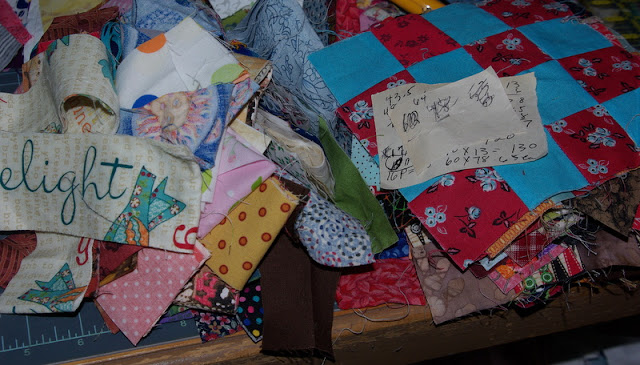 I've been cleaning off my cutting mat and table this week.

This is Part III
I found that little pile of 2 inch width scraps on the table.  I have a few UFOs that use 2 inch scraps that I usually sew along with each month as Rainbow Scrap Challenge projects. I've been working on one of those UFOs, Sixteen Patches that finish at six inches as you see on the right, off and on for a couple of years. I had 64 out of a total of 130 blocks.   I sorted through the scraps from my cutting mat as well as... 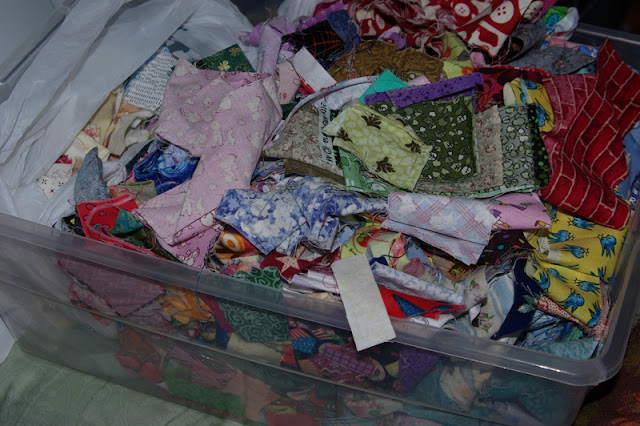 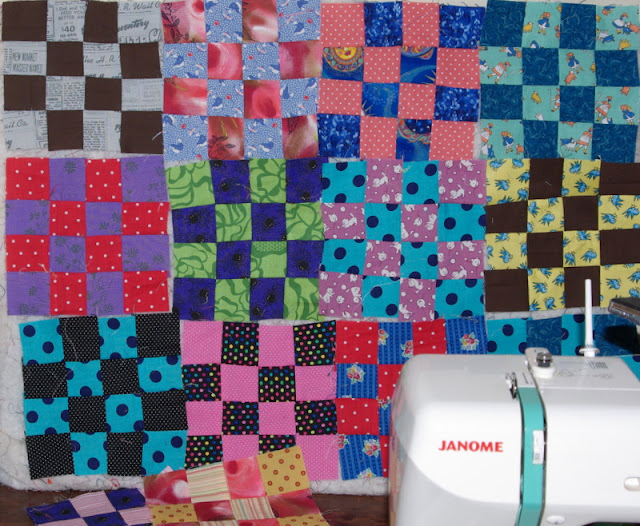 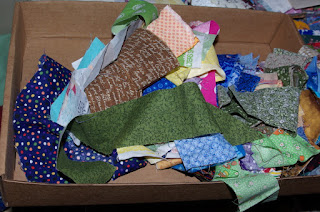 And I had a little pile of 2.5 inch width scraps on my cutting mat. 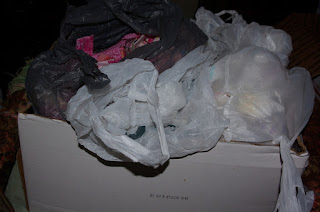 And this is my box of 2.5 inch scraps. The bags hold scraps sorted by color.

So between the scraps on the cutting mat and the scraps in this box I cut and made... 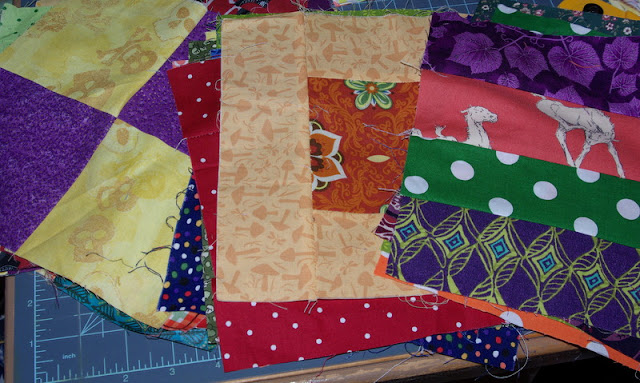 ....blocks for a quilt similar to one at Cluck Cluck Sew.   This has been a UFO since last year. The quilt consists of four different blocks and I want 20 each of those four blocks. (Instead of 8 inch squares like the one at Cluck Cluck Sew I am using four patches).   Anyway...with the 2.5 inch scraps I bordered the nine 4.5 inch squares I cut a few days ago (Table Scraps Part II) and made 10 more Rail Blocks.   I also sewed together the pieces I cut a few days ago from 4.5 inch scraps and made 11 more Four Patches.  I now have my 20 blocks of each of these three blocks. 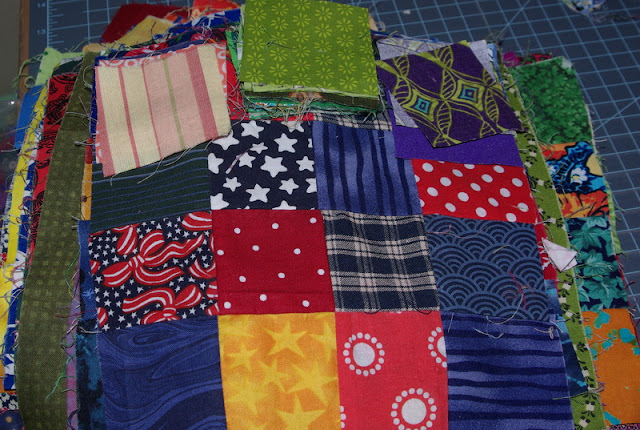 The fourth block for the quilt is a Sixteen Patch and I need 16 more of those. I didn't want to cut the squares for those yet so I'll make them later.  I was making some blocks with primary colors and some blocks with secondary colors. 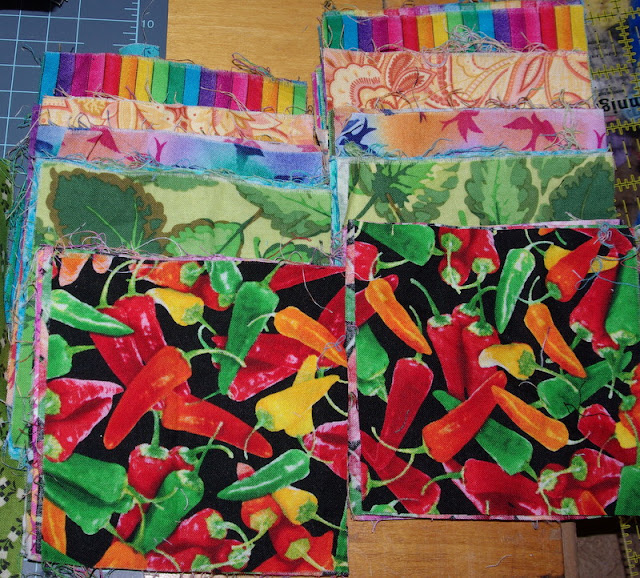 In Part II of Table Scraps I  these 20 sets of four 4.5 inch squares for a new small donation quilt.  Now that I was working with the 2.5 inch scraps from the cutting mat I also cut... 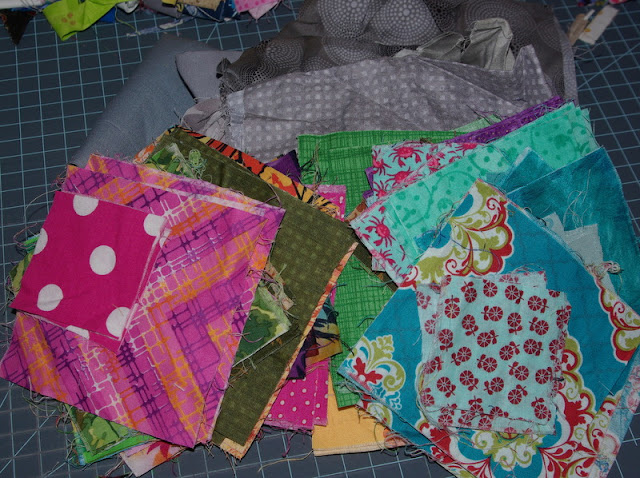 ...four 2.5 inch squares to match up with the 4.5 inch squares.  I need to cut some more pieces from some gray scrap chunks I found then I will make the blocks and flimsy. 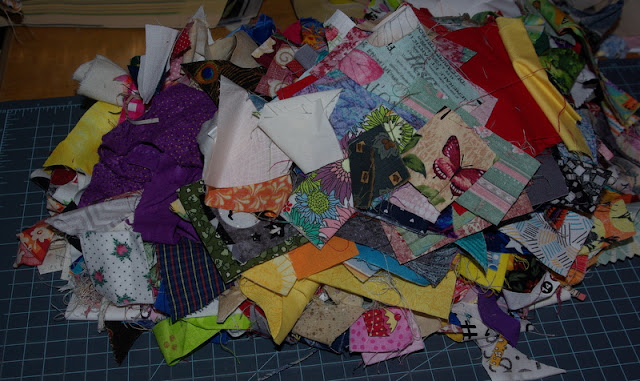 Finally that left me with a pile of crumbs on my cutting mat. 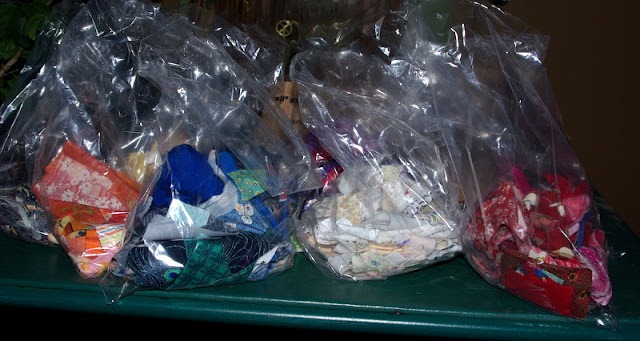 I sorted those into baggies by color. I want to finish making some big crumby hourglass blocks to add to my collection and now it should be pretty easy since I've got my crumbs sorted. 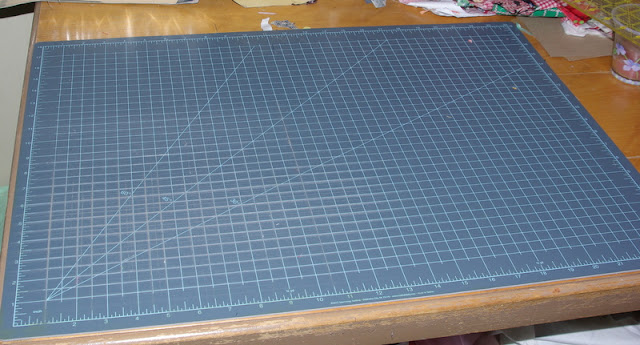 Now guess what!!!!
Take a picture it will last longer!! 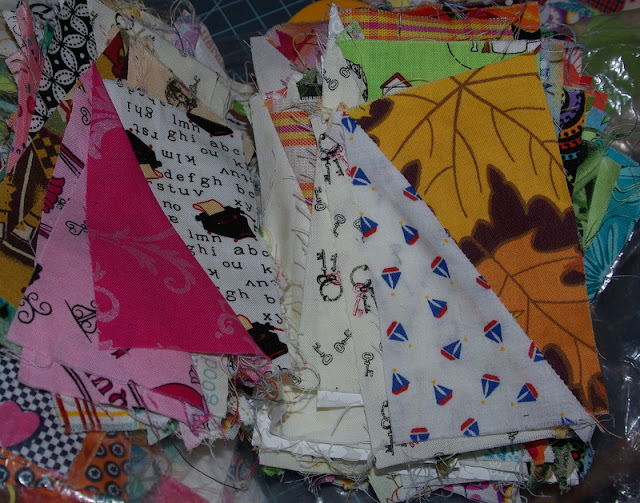 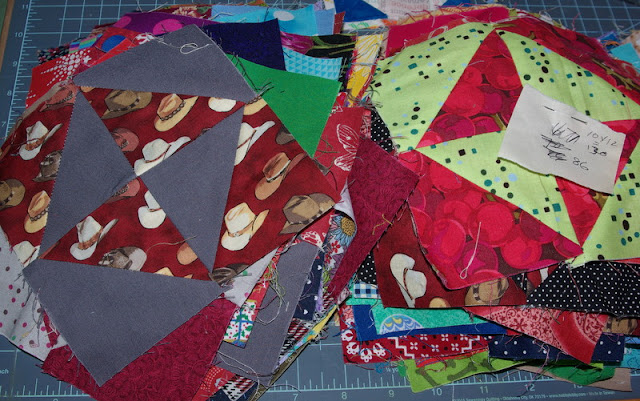 I also now have 130 six inch Broken Dishes blocks and can start assembling a top. About time!  I cut these forty-four blocks from 3.5 inch scraps on my cutting mat and in my bins as I blogged a few days ago. 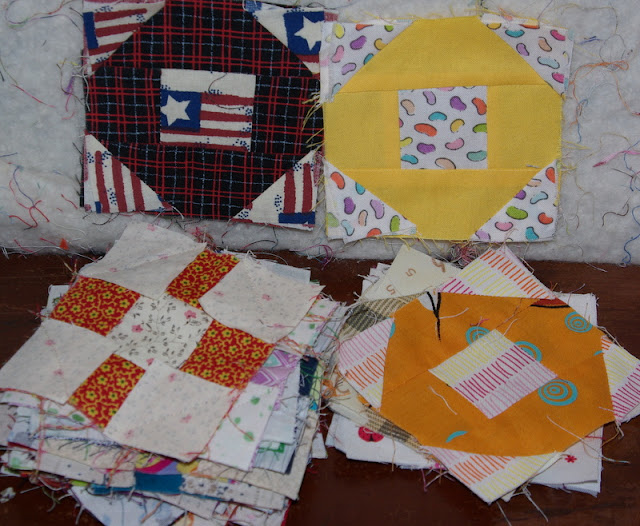 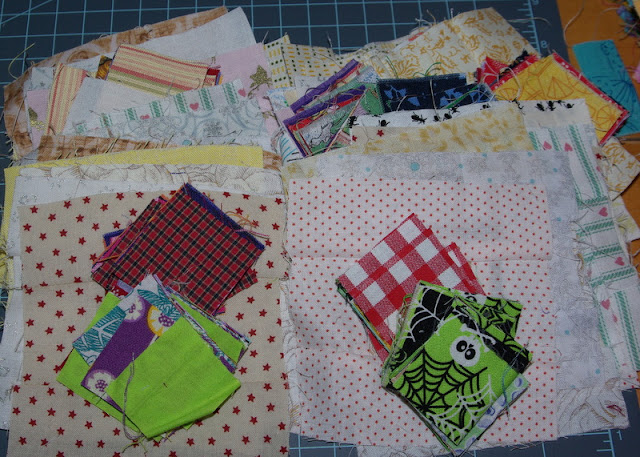 I've sewn the borders around the dark corner blocks but haven't added the flippy corners yet.  After these are finished I'll have 205 toward a goal of 312.  I'll continue to make these as a Rainbow Scrap Challenge project.


Well, now that I have finished cleaning off my cutting mat I think I'll link up to

Finished or Not Finished Friday at Alycia Quilts.

Oh my goodness you have certainly been a busy lady. You have so many fun projects to work on. Happy sewing!

i'm exhausted just reading about it! you are a scrap sewing tornado...and an inspiration to us all...

Wow, you had a productive week! I’m embarrassed that I did not accomplish more! Phew!

AWESOME effort and I love how many super scrappy quilts will happen because of this week's clean up.

Great work clearing the cutting mat, Cathy!! I only just cleared a third of mine. Now that it's done, I'll keep working on it. A clean cutting mat has SEW much possibility! :o))

Great that you are making good progress on so many projects. Wish I could clean off my cutting table and keep it clear for more than a week.

You are putting your scraps to good use. The sixteen patches are so fun!

Now I have a pretty good idea of your organization and productivity habits. I really appreciate your sharing of what so obviously works for you! You have shared lots of great tips! :)

It's only 7:30am and I think I need a nap after reading all your progress!! Good work:)

Gee, Cathy, think of how much more you could have sewn if you didn't stop to take so many pictures! Congratulations on getting that cutting area cleaned off. And thanks for the link to the Cluck Cluck Sew design.

You really have a great process of working with your scraps - and all the amazing quilts that you make are impressive!

Wowzers! Look at you got!
I think the last time I saw the full surface of my cutting mat was the day that I bought it...

Ah! It feels so good to have things sorted and trimmed and grouped and counted, doesn't it? I foresee another uptick in completed tops coming soon :)

Thank you for sharing your cutting progress. I have learned so much from you as I have been reading your blog for the last few years. I used to think that one had to make all the blocks for a quilt before starting another project...I now realize it's okay to make 5 of these, 10 of those and some of another that look fun and eventually enough blocks will be produced and a quilt will emerge.

You've been busy! I really like the quilt design with squares, strips, and 16 patches - great way to use all different sizes of scraps!

Plastic baggies are great for keeping track of all of the pieces for different projects, aren't they? Don't know what quilters did before they were invented!

A clean mat!? I made a dent in cleaning off mine but I got sidetracked by some uncovered treasures and started two quilts. You have some wonderful projects in the works. Thanks for sharing with Oh Scrap!

You are a VERY busy and organized quilter, from the looks of it! WOW!

So busy and well organized too, you are a real stitching dynamo!