It's a Snowball Flimsy! 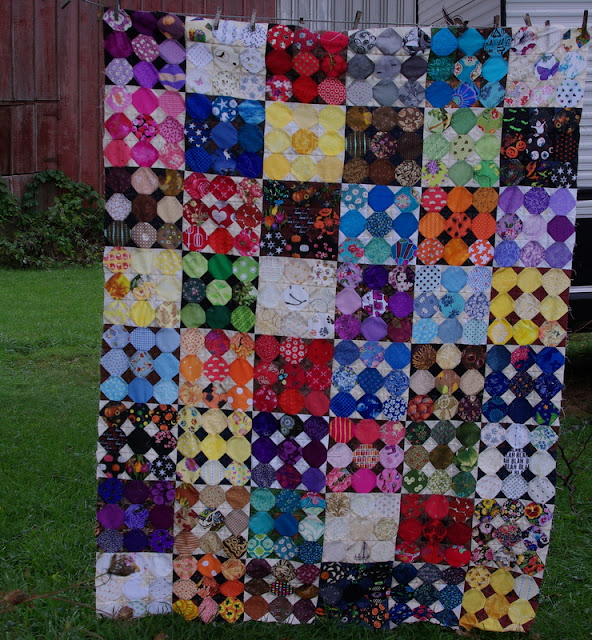 I started this Rainbow Scrap Challenge in January 2017. That year I used what was in my 3.5 inch scrap bin and made Snowballs with light corners.  This year I've been using what was in my 3.5 inch scrap bin to make Snowballs with dark corners. As I was making them I was thinking I would lay them out like a Lozenge quilt I made several years ago with alternating dark and light corners.

Last month when I had a large pile of blocks I played around with different settings and decided on a nine patch of blocks in the same color/corner which I thought was a little unusual and sort of vintage looking.

After I made the nine patch blocks I made sure I had enough blocks to alternate dark and light and filled in a little again using the 3.5 inch scrap bin.

I sewed the blocks together randomly - again a sort of vintage-y process. 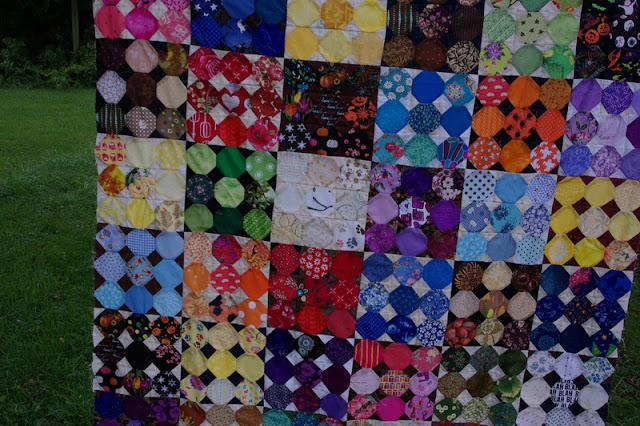 I like the top but it kind of looks like it has a few holes in it with all the neutral/light corner blocks.  But that's where the scraps took me.

I still have a few 3.5 inch scraps in the scrap bin and have been cutting one inch off the end of those scraps and one inch off some other sizes to make some fun little log cabin blocks.

Oh my goodness! Three days running and a new flimsy making an appearance on every one of those days. Love the Rainbow snowballs, Cathy.

I love this one--I like the vintage look of it..you will have a lot of quilts to layer and bind this Winter--that'll keep you warm ;))) hugs, Julierose

I like how you let the scraps take you where they want to go! That means a lot of happy and colorful quilts, just like this one. I like it!

You’re right, it looks very vintage-y. And I love it. The nine-patch setting and random placement, and even the light areas, give it an old fashioned vibe. What a great, happy quilt from such a humble little block! You e done it again!

Great quilt and very motivating to get moving on those scraps.

Really cool quilt top - I agree about the vintage-y vibe but I really don't see any "holes" / just a lot of glorious scrappy goodness.

What a cheerful quilt. I'm busy making quilts that seem to be production numbers. And then I see a quilt like this and it makes me want to cuddle underneath it. It's not fussy or temperamental or fragile like a lot of my applique seems to be. I need to concentrate on making something I want to use and not just hang on a wall or lay on the guest room bed. You are a good example to me.

I love the scrappy vintage look about this quilt top!

Three new flimsies in 3 days? Are you trying to set a record or will there be another one tomorrow? Cute arrangement of the snowballs!

Wow! You really are setting a record for most flimsies completed in the shortest time! And all gorgeous!

A flurry of flimsies, that's for sure! Well done!

My kind of snowballs!

Looks great!! I understand you "hole" feeling. That's what I felt when I finished my Crumb quilt that included ALL the colors + black and white. Holes in the quilt, but next time I vowed to leave the hole-makers out! They can have their own quilt somewhere down the road.

You are on fire. I love the look of the three by three snowballs. Hmmm...maybe a dominoes quilt is calling me...

Such a fun quilt. It does have that vintage feel.

Yet another of your scrappy quilts that I like a lot! Very vintage looking!

It never ceases to amaze me the way your quilts turn out so beautifully when you sew them together randomly! Those lighter blocks are sprinkled around the quilt and give the quilt top a lot of interest... my eyes couldn't even take in all the details! Great job!