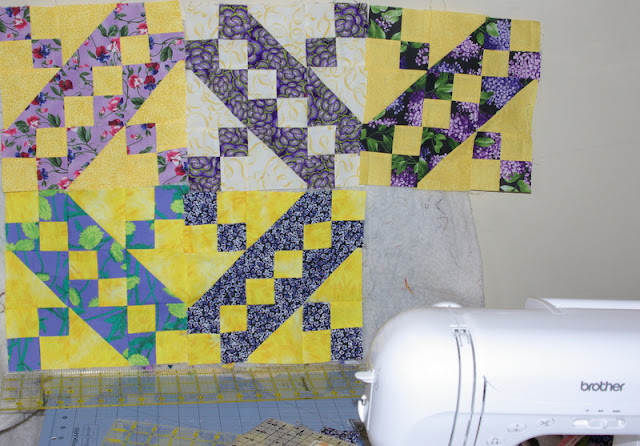 Floribunda
Floribunda (Jacob's Ladder) is a UFO from 2011. These are nine inch blocks and take 3.5 inch pieces. I don't have many 3.5 inch scraps - maybe a shoe box full- so I cut fabrics for these blocks.  I'll make a few blocks in yellow and florals in the RSC color of the month and hopefully have enough blocks at year end for a big quilt.   After making these blocks I had more purple 3.5 scraps. 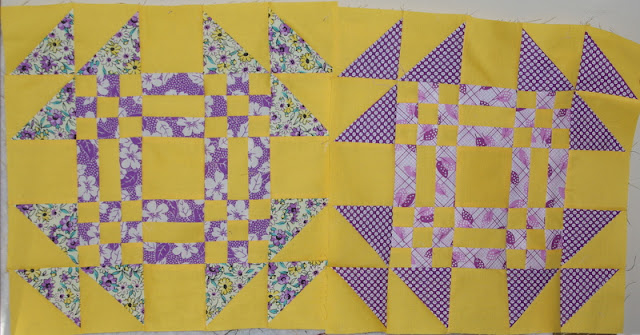 Goose in the Pond

Goose in the Pond is another UFO from 2014. Strange that these 15 inch blocks are also on a yellow background (Kona Corn).  Since I don't have many blocks made for this UFO I guess that I can mix up that background. We'll see.   I've been using my 30s fabrics in this block. I have no 3.5 inch 30s scraps so I cut into yardage to make these blocks.  And after I made these blocks I had some more purple 3.5 inch scraps (and 1.5 inch scraps I put into the box for another 30s UFO that takes 1.5 scraps). 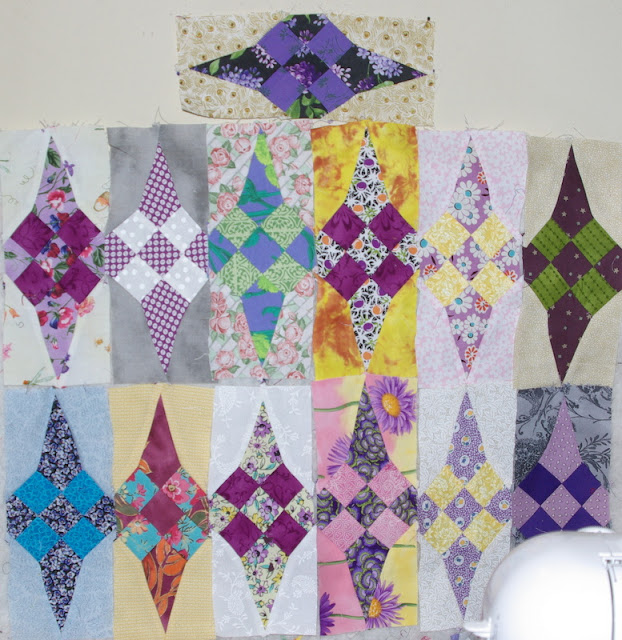 After I made Floribunda blocks and Goose in the Pond blocks and pulled out any purple pieces from the 3.5 scrap box I cut pieces for my Glitter blocks and made some of those - my new RSC project this year. 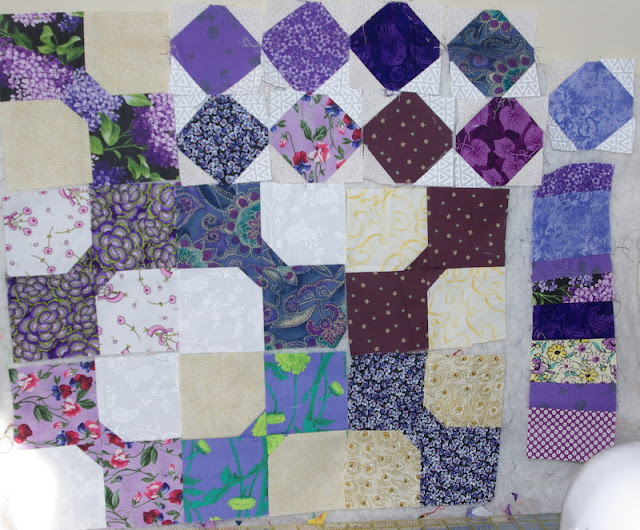 Snowballs, Bow Ties, Strips
From the remaining 3.5 inch scraps I made some 3 inch snowballs and some six inch bow tie blocks- new RSC projects for this year.   I also cut a few 3.5 inch squares (not shown) from the remaining small pieces to later be used in a donation quilt and if the scrap was less than 3.5 square then I sewed it into a strip as shown on the right.  Use to be determined later.

And that ends the purple 3.5 scrap edition.

You get SO much done . . . and you have such great scraps!

Lots of PURPLE scrappy goodness going on at your house!! It looks like you are having some BIG fun!

Such a cool bunch of blocks! Those Glitter blocks are especially fun and I am excited to see more blocks added to all of your projects!

I love all your blocks. I always have purple scraps of some sort around.
It's a must for contrast.

it is nice the different ways Jacob's ladder can be made

Look at you go!
I've got Floribunda and Goose in the Pond both tucked away for future making - I'm going to enjoy watching you make blocks for them!
And Glitter Glitter Glitter! (It occurs to me that I may have enabled you so that you could enable me right back. Gonna go rustle up that Glitter bin now... Purple Glitter for the win!)

So many beautiful purple blocks!! Loving these!!

I want to do the glitter blocks too.

It's fun to see what you can do with all those 3 1/2 inch scraps. And funny that after you cut into fabric to get more pieces for the blocks, you end up with more 3 1/2 inch scraps! I guess that happens to all of us!

Wow! You powered through a lot of purple in a hurry. Love those glitter blocks, they look complicated.

I think its time that you shared your method for keeping track of all these blocks. I'm tempted to start a spreadsheet. In any case, watching you work your magic is still inspirational.

Amazing! I love that lilac fabric in the first picture! ---"Love"

You have an amazing scrap system and loads of purple. It will be fun to see them with more colors. Good luck with all.

What a marvellous collection of quilts. I love them all! The Twinklers Quilt really appeals to me. The block is similar to a Friendship star which uses HSTs for the star points. Looking at your photo I think the star points must be scraps, especially if you are using 2.5" scrap squares. Do you know where I could find a pattern for this block?

You are so productive. It's always fun to see what new blocks you choose for the RSC projects and this is such a good start to the year.

Your Glitter blocks are wonderful!

Oh my, those are all nice. You will have some beautiful quilts at the end of this year.

I love your glitter blocks and can't wait to see them progress. I imagine they are difficult blocks to sew. I like the others too :)

You are off to a great start!

using up heaps of scraps in those
Hugz