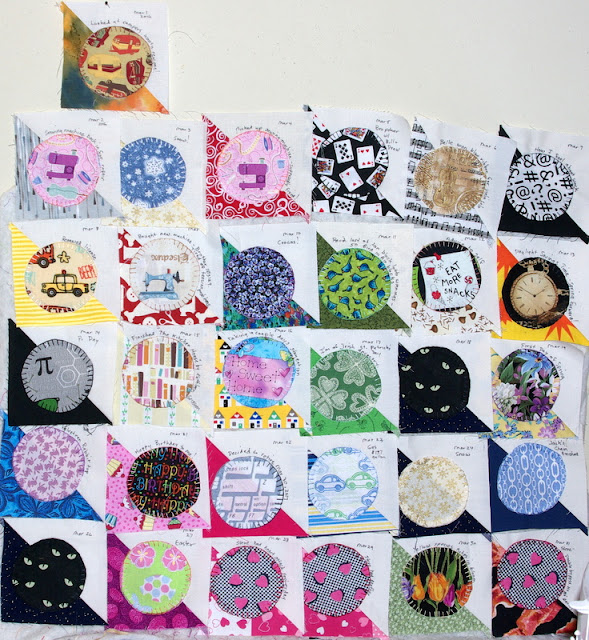 My March circles for Marginalia which is a Quilty 365 project - an idea of Audrey's who blogs at Quilty Folk.  The idea went viral and there's all kinds of circles out there in blog land now.

I started my circles on Nov 4, 2015 and have made one every day since.  I don't know how many that happens to be but I need to start sewing them together. But first I need to make up some circles with the letters in MARGINALIA and then I will sew them together in date order in rows 18 x 21.

I keep a note some highlight of the day on each 4 inch block with either a micron pen or permanent fine tipped marker.  I finished up March 31 last night while waiting to hear on my brother's quadruple bypass surgery.  He had a heart attack two days in a row which was a surprise to all of our family since he didn't even know he had any heart problems - he doesn't smoke, is not overweight, and doesn't drink or take any drugs.  He does love bacon, though. So no more bacon for Steve! It's difficult to be so far away (he's in FL and I'm in IA) and feeling helpless.

When I went to take pictures of my circles I also noticed I forgot to make circles for two days (so maybe I fibbed a little when I just said I "have made one every day since"). Either I forgot or they got lost but anyway...I had some black fabric with eyes on it...those denote that either the block for that day fell into some black hole (or I was feeling like I was in a black hole).

Other than that I celebrated a birthday, St. Patrick's Day (I'm of Irish ancestry on dad's side), first day of Spring, PI day and Easter.   I had crocus and species tulips in bloom. My granddaughter received a blue ribbon for her violin solo. I decided I will retire March 30, 2017. I finished the book "The Kitchen House" by Kathleen Grissom ( a good book, btw).  I finished a Jack's Chain quilt and I ended my sewing machine tension problems (on Janome DC2010) and my tension headaches and bought a new  Brother SB3129.

There's quite a variety of circles (and other shapes). Just look and see at the Quilty 365 linkup.

Such a great idea - and your blocks are really getting numerous now! I am continually surprised by how much we have in common - both of us being Cathy, born in March (me on Pi Day, you on St. Patty's) and we both have a brother Steve. And we both quilt and crazy quilt and are grandmas. Happy April!

I'm excited at the prospect of your letters spelling out Marginalia - what a perfect touch!
I hope your brother is doing better and recovering fast. It's hard when you can't be there to give him a hug.

Such a fabulous interpretation of this circular project!

This is going to be such a wonderful finish. I really love your split background squares.

Wow, love the use of half square triangles as your circle backgrounds. Very striking!!

Wow, love the use of half square triangles as your circle backgrounds. Very striking!!

Your backgrounds are some of my favorites. It's going to look amazing when it's all put together! So sorry about your brother. Hope he recovers quickly!

I hope your brother recovers fully and doesn't miss his bacon too much. I still love your approach to these circles. Also, if you retire next year, will that make you even more productive?

Your blocks always make me want to add more novelty fabrics to my stash! Love seeing your circles and hearing your stories...hope your brother makes a fast recovery!