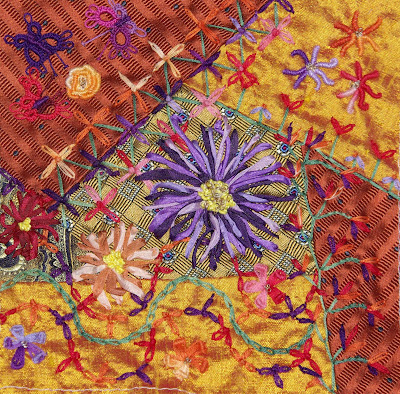 This is Beryl's block for the "Anything Goes" RR. The block had beautiful gold/orange/yellow fabrics so I chose an analogous color scheme since I seem to like that combo most. I pulled all my purple, red and orange threads (and a touch of green) and stitched several seam treatments and then filled in with the twisted silk ribbon chrysanthemums. 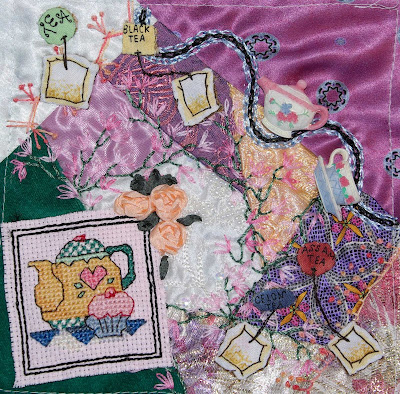 This is Kerry's Tea Time block. I didn't pick any special color scheme. I just tried to use what was in the block. I started with a small cross stitched teapot and cupcake done mostly in gold to pick up the gold in the piece on the block. I did a curvy seam treatment up in the upper right corner in the same colors as the circles on the fabric. I added the teapot and cup buttons. They stuck too far out and were too heavy for the block so I made a tiny hole to insert button back into hole so button would lay flat. It looked much better that way. The silk thread vine with pink silk flowers that meanders around doesn't show up too well. And finally, I appliqued on some varied flavors of tea bags. This was the last of the blocks for this RR so I'll be mailing them home to Kerry soon. 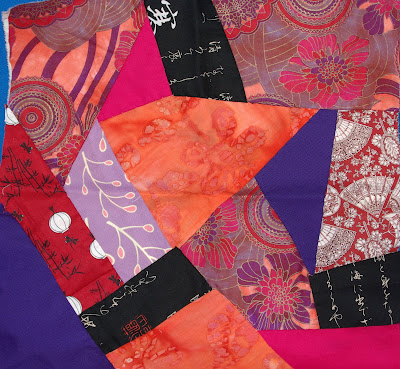 This is a block I made for the CQ4Newbies Asian Challenge. It follows same color schem as Beryl's block...red, purple, orange. As challenge moves along we will be introduced to several different seam treatments that need to be added as well as some other items. A big embroidered dragon is going in the middle! I don't really like the Asian blocks; however, I just remembered that my sister is now a Buddhist (one in a long line of religions she has embraced) so I will be making this 16 inch block into a pillow for her for Christmas.
Posted by Cathy at Saturday, June 11, 2011