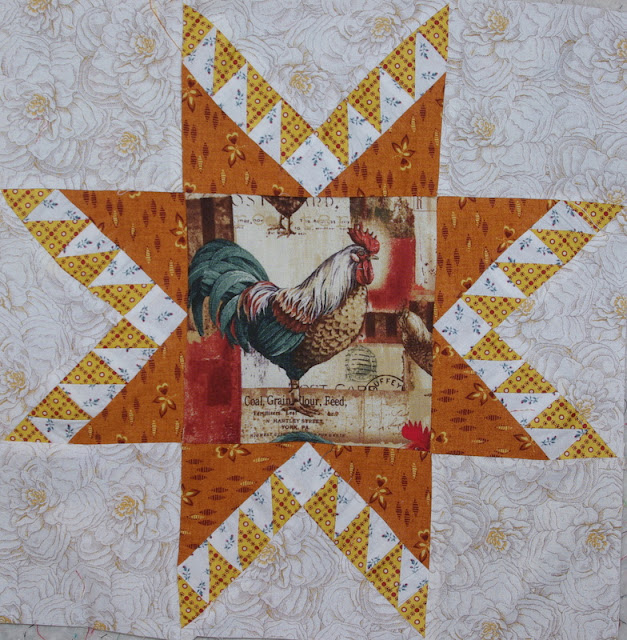 It's no secret that I have a lot of UFOs. For the last several years I have made a list on December 31 so I know what I have going into a new year. There is a tab at the top of my blog with the list.  As I finish things I cross them off. If I have a new start I add it to the bottom of the list.

Yesterday I decided to work on these Feathered Star blocks again mainly because I have a little pile of neutral fabrics I thought might be good for these block backgrounds set aside and I want to use some of the fabrics if I can in other quilts. 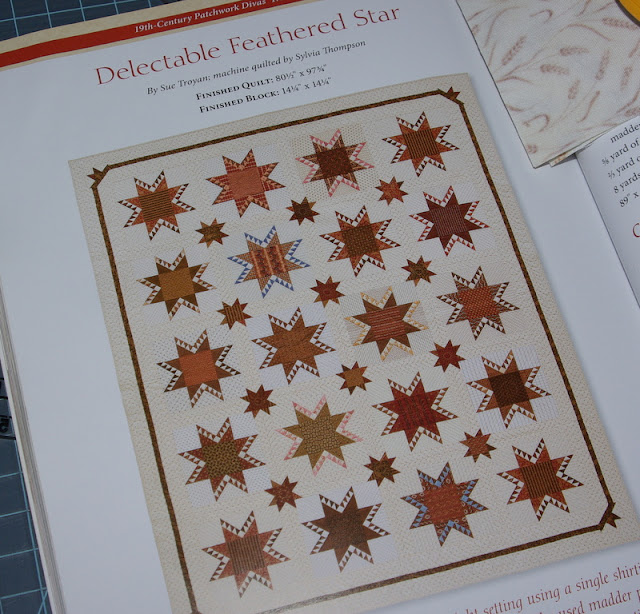 This is the quilt I intend to make. It is from 19th Century Patchwork Divas' Treasury of Quilts by Betsy Chutchian and Carol Staehle. 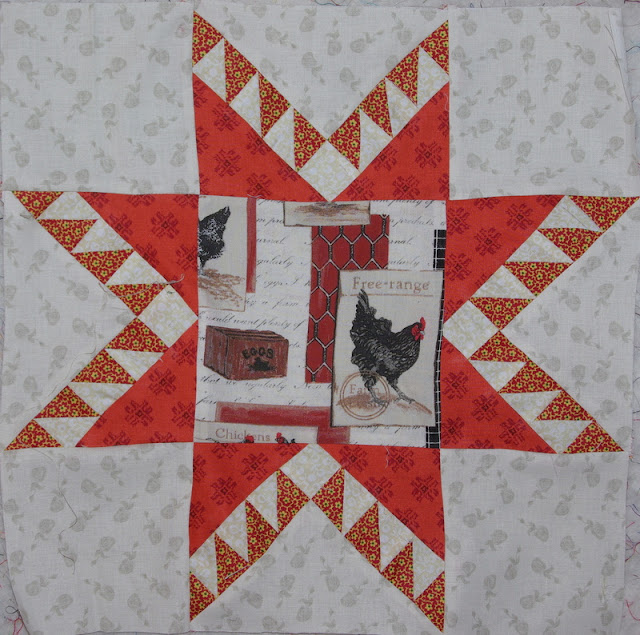 So yesterday I made three blocks and had nothing but problems. 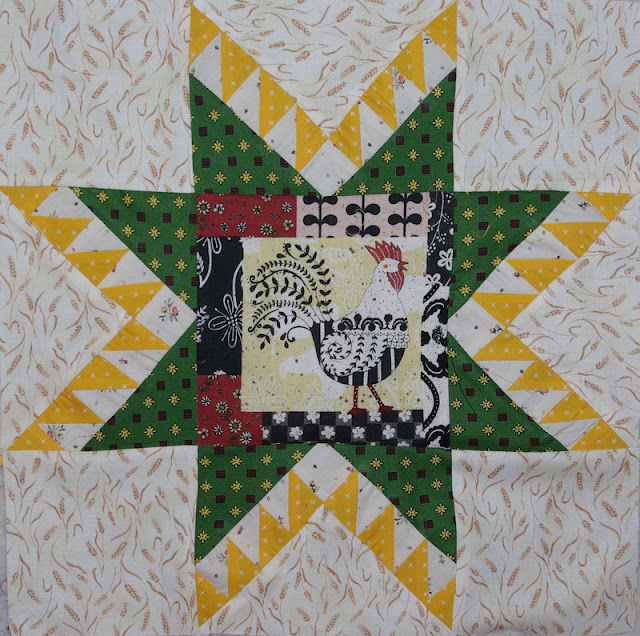 I did a lot of seam ripping and then some more. I was ready to throw the blocks I made previously into the orphanage.  I had no idea why back in March 2018 I thought they were easier to make than they look. I had problems with pieces stretching out of shape and I had nothing but problems with those little HSTs.  The method in the book for making HSTs is the cut squares, draw diagonal line and sew on both sides and cut apart method. I'm not a fan of that method of making HSTs. 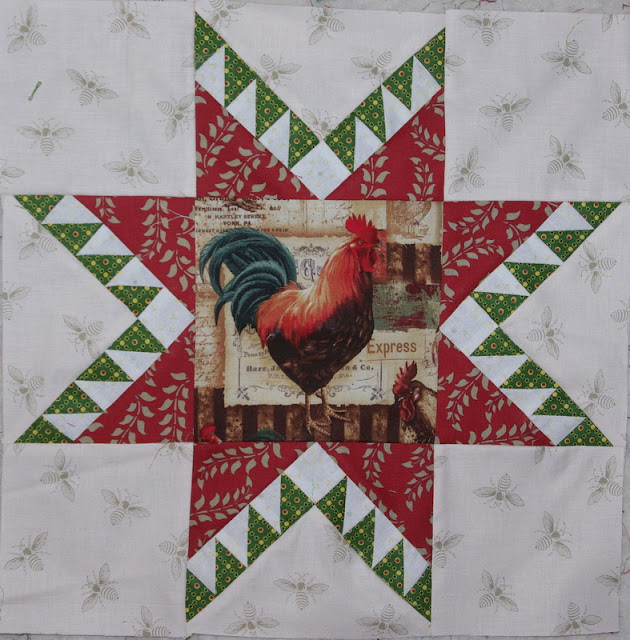 Today was a new day. After yesterday's fiasco I decided to try again to make one block and use my Easy Angle ruler to cut the HSTs and I didn't have to use the seam ripper at all.  So I have made a note in the book about several of my changes to the block making process should I want to make another one some day. (Yes, I am already thinking about it. It is a fun way to use some large print novelties.)

Anyway...I have 8 out of 20 blocks and I'm going to work on this UFO a little each day until it is a top.

That is a beautiful block pattern, and your quilt, when completed, will be stunning! I can't wait to see it! ---"Love"

I love this one! I am constantly amazed at how much you get done! If this one is begging for a home, I’m sure it would be happy keeping me warm here in CT (LOL) . Keep quilting and happy Stitching.

Having all the bias edges on the outside of the HSTs must have been what made them misbehave. This block looks like it wants to be on the straight (of grain) and narrow! Love those rooster centers :)

I'm a fan of Easy Angle, too. I get much better results that the draw-a-line technique.

I’ve been using the Easy Angle ruler for a few years, thanks to your recommendation. I try to always convert any needed HSTs to this method because it’s quick and reliable. But I still don’t like patterns with a ton of HSTs because of the trimming. We would be rich if we could invent something that automatically trims them. But in the meantime, I love your feathered star chicken blocks!

Congrats on your perseverance - I will cheer with you when you finish this top! Sandy at sewhigh.blogspot.com

I love those chicken stars!
I've been an Easy Angle fan since the moment I first bought one. I do sometimes still use the sew-squares-on-the-diagonal-and-cut method (a lot of my Demented HSTs were made that way), but really prefer the EA ruler.

I was interested to see that you don’t like the HST method which involves drawing a line down the diagonal of the square and sewing 1/4” either side. I find it SO difficult. Can I pick your brains? If you want a finished 2.5” HST what width do you cut your fabric strip when you use the Easy Angle ruler? Love those chickens in the star centres! Good luck with adding more blocks to your collection.

A chicken quilt! My son-in-law to be has hinted that if I ever make him a quilt he wants chickens on it.

Love your chicken blocks!
There's a way to make the triangles by paper piecing the entire strip. I think it may be the easiest, most accurate way to go.

I can't believe that you work with so many tiny pieces! LOL But the title of your blog says it all. LOL It looks like you have a lot of flimsies. That's great. So your list isn't as long at it appears because you have so many ready to quilt. So your star blocks are going to be beautiful.

I've tried using the Easy Angle ruler for HST, but I can't get an accurate, square HST with it. I think it's because I can't adjust the pressure on my presser foot on my Bernina. So I oversize and trim.
Pat

Great blocks, but i can see how they would be tricky, glad you found a method that works for you.

I love your chicken centers!!! This is fun, and it sounds like you have a plan for making progress.

So glad you reconfigured these blocks as this is a fantastic use of that chicken fabric! Love, love, love the hsts in the block. It's gonna be a great quilt!

Such a beautiful version of Feathered Star. What a lovely place to showcase some large prints.
I'm not a fan of that HST method either but I don't have an easy angle. I guess I just do it the old-fashioned way.

GREAT post! Super way to showcase the chickens - lots of little HSTs (which I love). When I don't use the die cutter method, I make mine oversize and trim them as needed.

Congratulations on solving the problem! Great idea too, to add your personal corrections into your copy of the book for reference so you can get the results you want as you continue. That way, if the blocks get (for some reason put into time out) you can still make happy little blocks without tearing your hair out!

I have never understood the HST method of drawing a diagonal line, sewing parallel to it on both sides, then cutting. I put the squares right-sides-together, cut on the diagonal, and then sew. (And trim if need be.) Why bother to draw where you're going to cut?
.....A feathered star is on my bucket list. The one your show may be achieveable.