Done Pondering for Awhile. I Have a Quilt Top 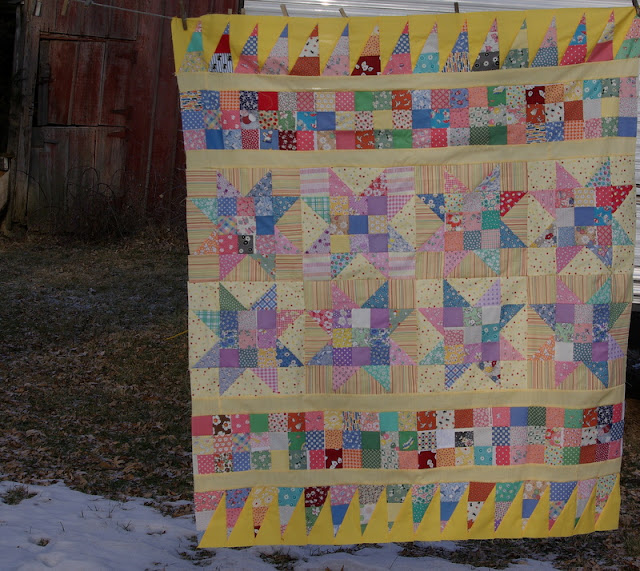 Late last month I was pondering what to do with some 30 reproduction scraps I received from a giveaway. 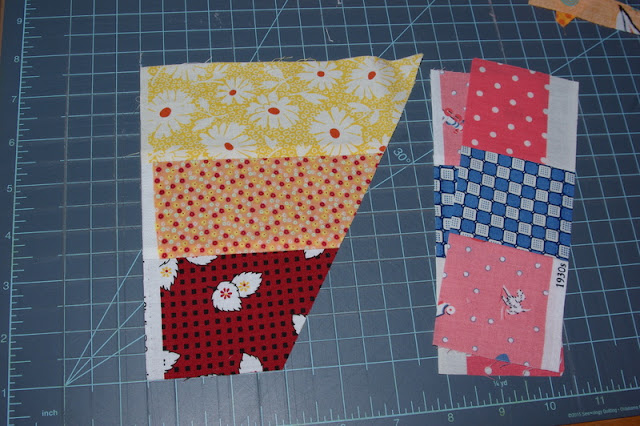 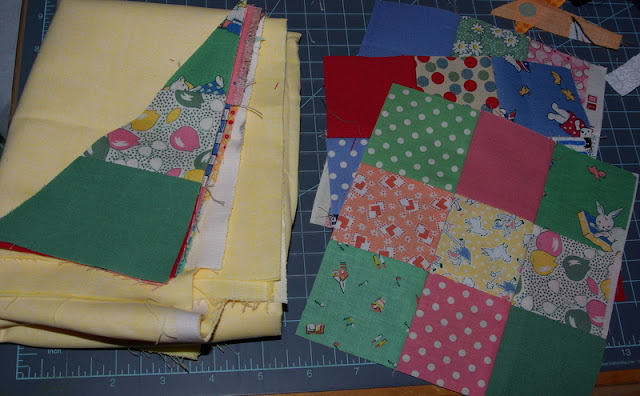 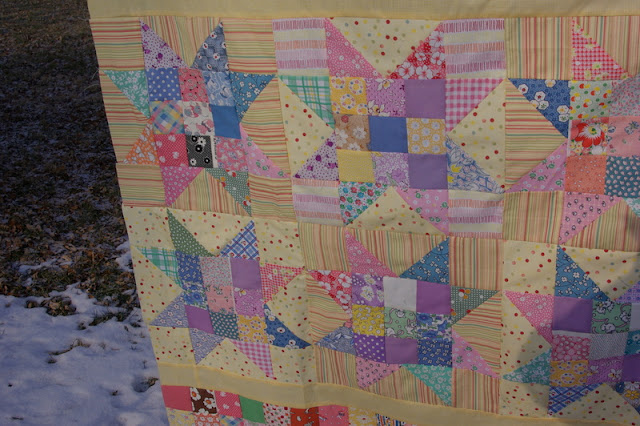 I made some of the nine patches into twelve inch Star blocks. The yellow polka dot and yellow stripe came from the stash and the star points came from my 30s reproduction 3.5 inch scraps. 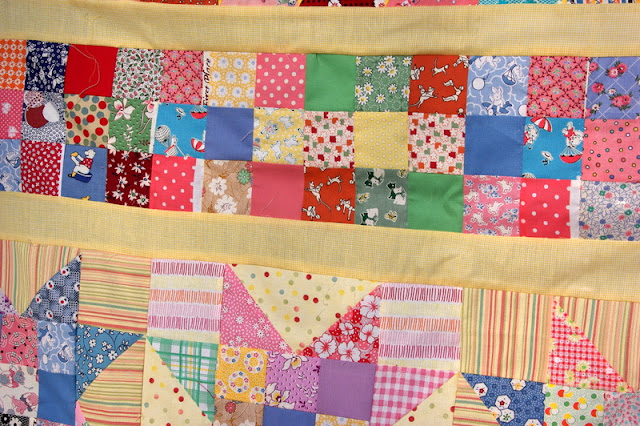 I had decided I was going to make a row quilt so most of the remaining nine patches went into a couple of rows between strips of yellow gingham. Those strips came in a box of scraps from another friend last year and I put them into a box of scraps destined for baby quilts. I think I have enough of those gingham 2.5 inch strips to use for binding. 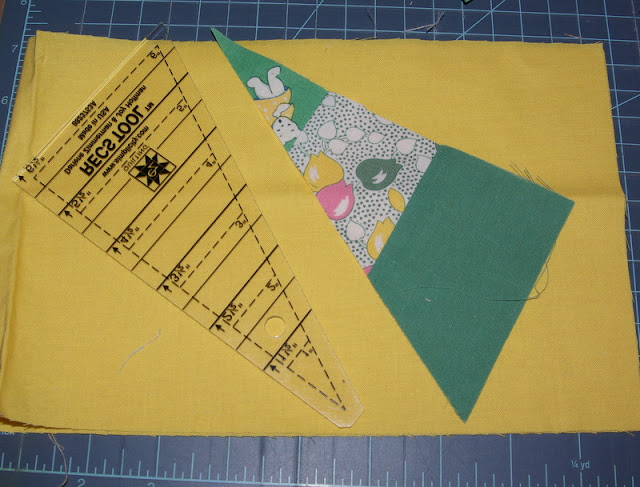 I was going to make a template to cut pieces so I could turn those wedges into HRTs (Half Rectangle Triangles) but I noticed they were almost all exactly the same size as the Tri Recs tool ruler so I used it to cut pieces from yellow solid for the HRTs.   The yellow solid was a little brighter than I wanted to use but that's what I had on hand. The solid piece had to be reversible in order not to waste fabric when cutting wedges that all needed to face the same direction. 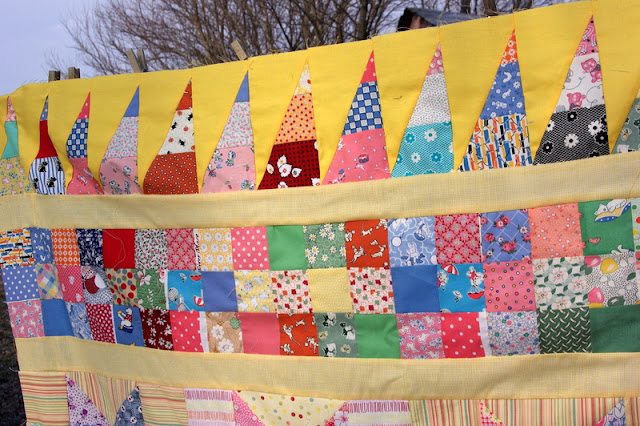 After the HRTs were made I made a row pointing up and added it to the top of the quilt. 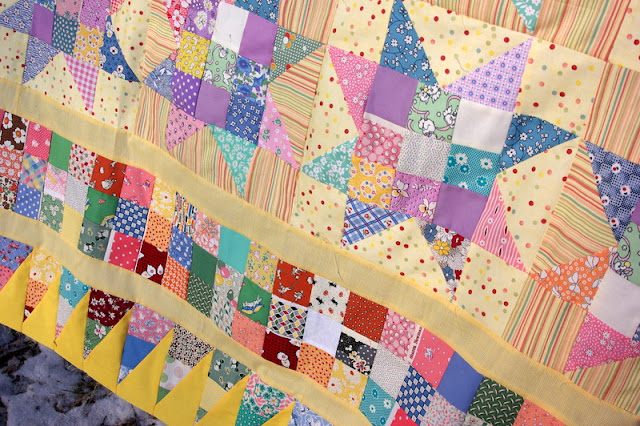 And I added a row of HRTs pointing down to the bottom of the quilt top. 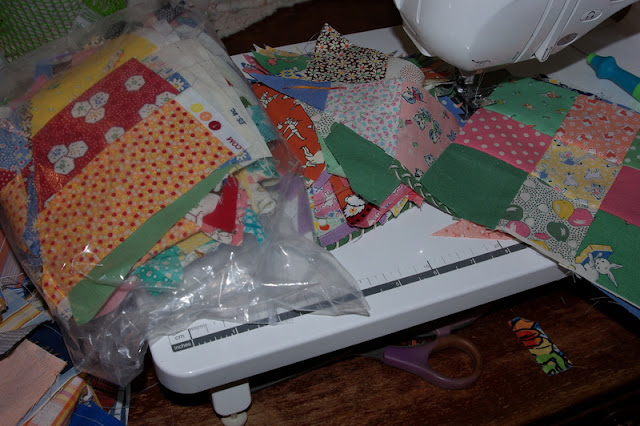 So that left me with 3 nine patches, lots of wedges and a bag of the original wedge shaped scraps that had less than a 2.5 inch strip for me to trim for nine patches.

I have an idea for the rest of the scraps and hope to get around to it sooner rather than later so stay tuned.

Oh Scrap! at Quilting is More Fun than Housework
Posted by Cathy at Sunday, February 09, 2020

I have that ruler and it reminds me that I haven't use it nor the ruler it come with in sometime. I have so many ideas for scrappy quilt and all of you just help me add to my list so often. Great job

Very successful end for those scraps as it’s cute and adorable. A sunny and happy quilt. And, I don’t have that ruler but need to put it on my Wish List for quilting supplies.

What a great way to use up all those scraps and a lovely colourful quilt at the end of it all :)

Oh my goodness... you are the scrap goddess!

Wow! Such great ideas for using up some odd-shaped scraps! Congrats on a cute top. Can't wait to see what you do with the leftovers.

I don't know how you do it, but you do it very well! This quilt turned out very pretty. ---"Love"

This is lovely. Your backgrounds are so soft looking. you always have such a humongous variety in your quilts and are so jiffy at getting them done!!! Do you have helpers hiding in the basement?

It's beautiful and your scraps all look so vintage flour sack. There is nothing as cheery as a warm and cozy scrappy quilt :)
Great job!

Wow! I'd never guess that this was all scraps and not planned! It looks very authentic 30's scrappy quilt to me. Great job! I love it!

Goodness me, this is a wonderfully scrappy quilt. What a wonderful use of fabrics. Go you!

That’s really clever! You have made a lovely quilt from scraps and lots of ingenuity. I can see some smaller 9” patches on your horizon from those wedges which will not yield a 2.5” strip. I’m staying tuned!

That looks more like a planned quilt than an "I bet I could make something out of this" quilt. Well done!

Wow Cathy, that went together fast. I love how you repurposed those strip sets. Your top looks great! Thanks for sharing with Oh Scrap!

A clever way to use these up. The soft yellows make a wonderful background. I need to find some myself.

I love the spiky top and bottom rows! Very clever to use a solid filler triangle so it can be reversible. There's something really compelling about wrangling someone else's scraps into a quilt. Very satisfying :)

Aren't you clever! I would never have thought of using those wedges like that. You have created a wonderful, sunny quilt, sure to brighten someone's day. Perhaps you will keep it?

The spikes add a lot of movement to the quilt and such lovely gentle colours.

Wow! Very nice. I can't believe you had leftovers even. You really made good use of those triangles.

Really cute design for a quilt, especially one with someone else's scraps! I forgot about the tri-recs ruler and making HRTs with it. You really have your thinking cap on!

Any type of quilting is better than house work. Your quilt looks great. I wish I could always find yellows so pretty.

What a clever solution! The variety of blocks makes this sing.

What a beautiful quilt!!!! It’s amazing that it came from scraps!

Inventive use of scraps!!

What a great way to use up scraps

Oh! my! Stars!!! WOW - I knew there was another Quilt ( or most of a quilt) in there!! Look at how creative you are!! BEAUTIFUL quilt!!

What a wonderful way to use scraps! I like that you used selvedge when you needed to. I like to do that too but sometimes there are those little holes in the fabric on the selvedge - I wish they wouldn't do that! Those scraps turned out to be a beautiful quilt.

Such a fun happy quilt - great way to use those 30s fabrics!

I love scrappy quilts and that one is a beauty. I love the vintage look of it.