A Tale of Birds in the Air 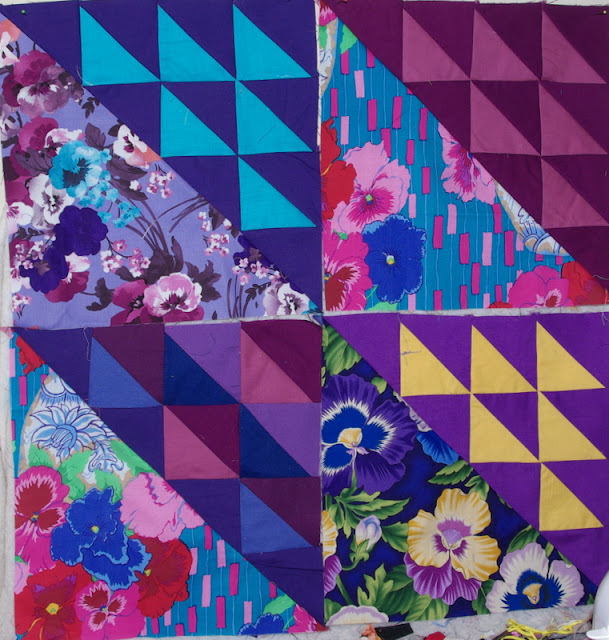 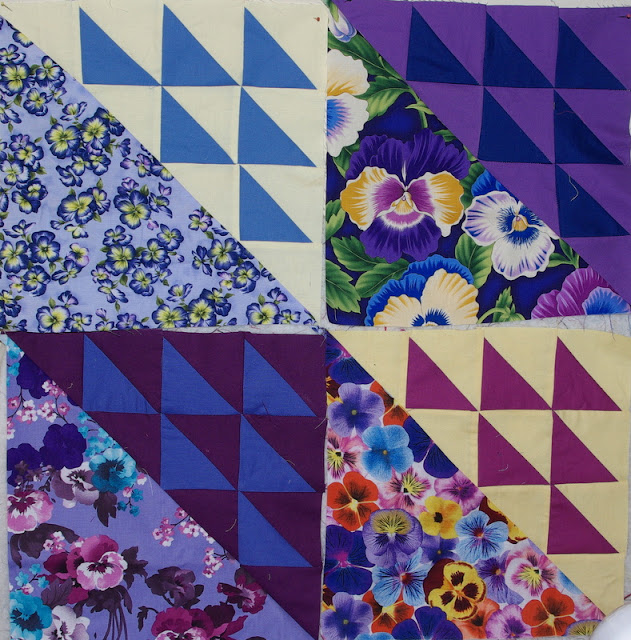 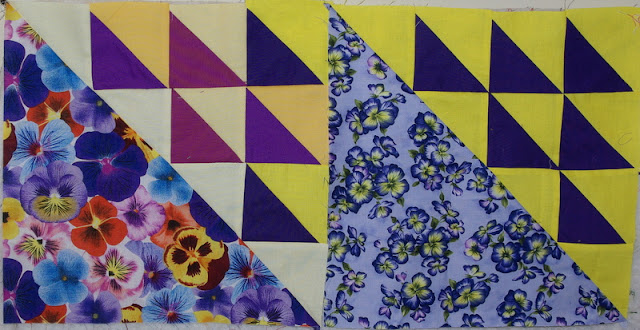 Somehow I ended up at a free pattern download for Tula Pink's Chipper quilt.  I didn't need to download it because I recognized it as a large Birds in the Air block and I know how to make those.  But what I did like was the layout and mix of solids.   I have a collection of large print pansy fabrics and decided this should be the block for them.   I immediately made a few 12 inch blocks to see if I liked them.  I do. They will be set on point. A long time ago I made these six inch blocks from pansy fabrics but I just couldn't bring myself to cut into some of those larger prints. 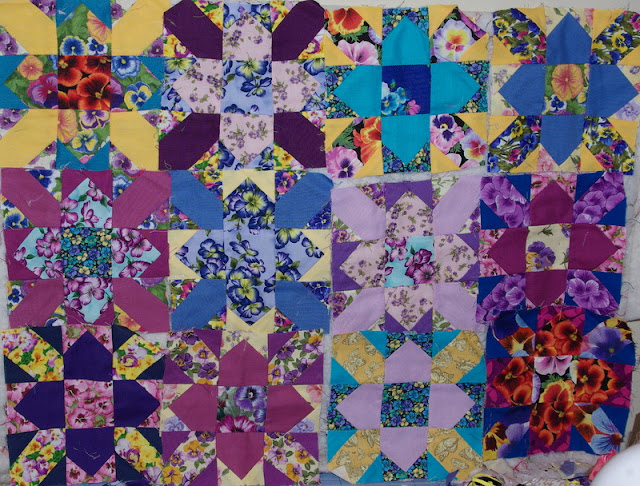 I wasn't even sure I liked them all that much either so this quilt kind of stalled. 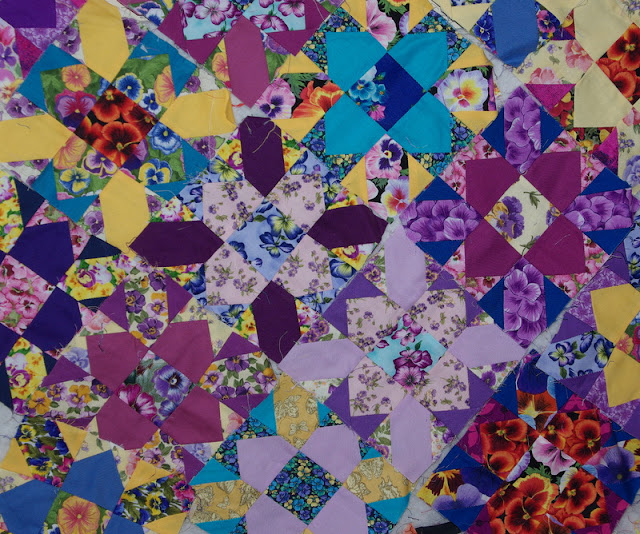 Maybe I'll make a reversible quilt and this will be the reverse.  I do love pansies. 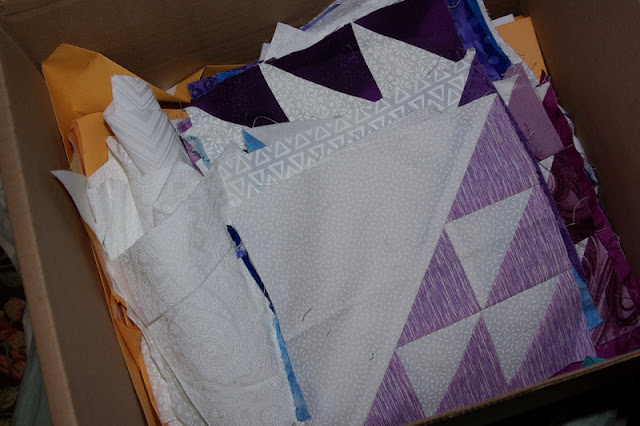 Ok...back to the tale of Birds... I felt guilty starting a new Birds in the Air quilt when I have a couple of other ones that are UFOs.   Back in 2016 I won about 50 six inch blocks from Block Lotto in blues and purples plus white tone on tones.    I was going to make a quilt with Birds in the Air bordered by Flying Geese similar to one I saw online. 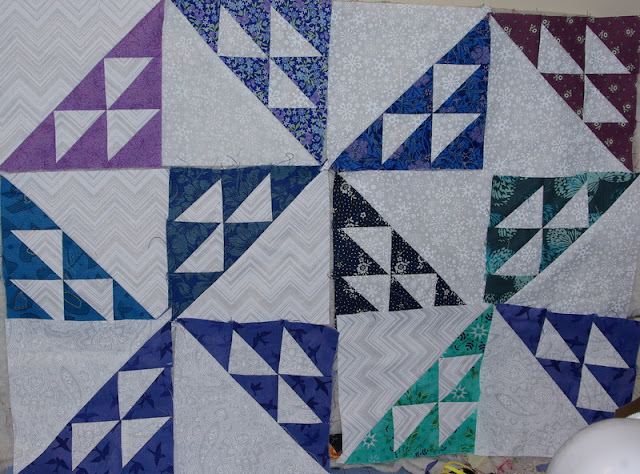 So my guilt forced me to make a few more Birds in the Air blocks for this quilt.   I thought I only needed sixty blocks for the body plus four for the quilt corners so I made 9 blocks plus blocks for the four corners.   Then I realized I need 100 blocks for the center not 60 so I have forty more to go. Darn!  I don't think I may have to add some gray or gold birds to the mix because I have very few purple fabrics or blue tot or small prints.  I'm not even sure I have enough white fabric. 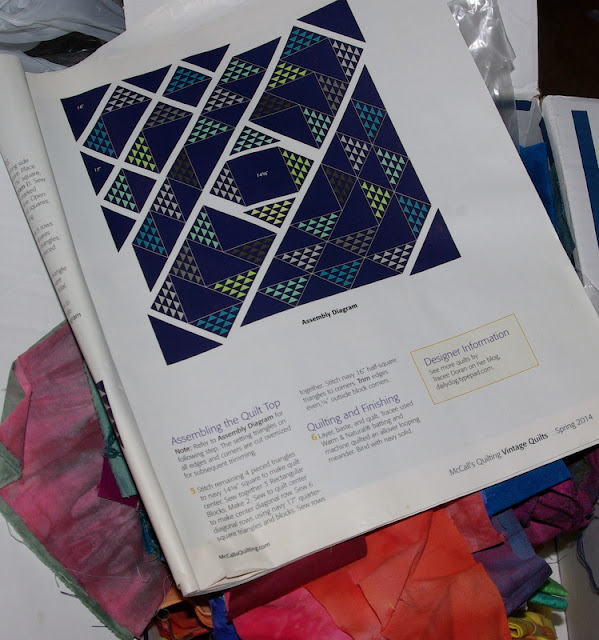 And I have even more birds in a box that need to get some air.  I evidently started this in 2014 because I think I started it right after I saw it in the magazine.  I had won some hand dyed scraps from Vicki Welsh  and thought they would look wonderful in this quilt against the navy. 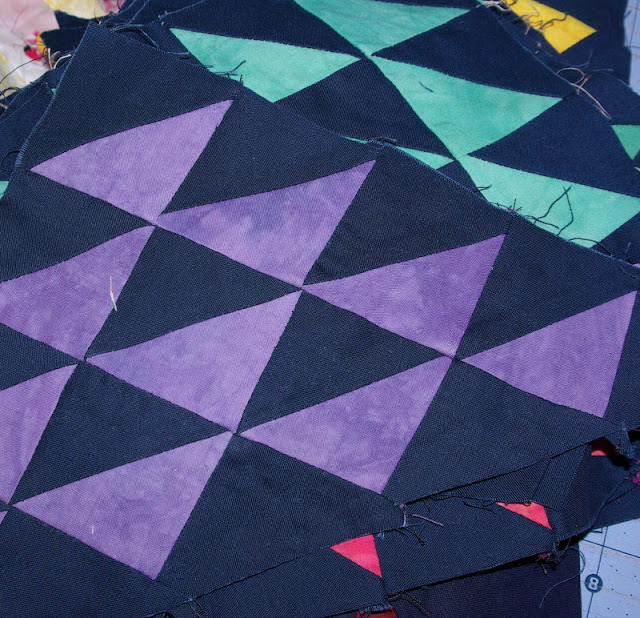 I'm not sure why these stalled.  I even have the 2.5 inch strips of scrap fabrics cut and threw some other hand dyes in the box to add to the mix.

And now that I see the two Bird halves together I really like the look.   Maybe they would look good in those civil war repro scraps with muslin? or shirtings? Hmmmm.  Maybe the Tale of Birds in the Air has no ending.  But maybe the moral of the story is that a bird in the hand (quilted quilt)  is worth two in the bush.  Say what?

Love the pansy blocks. The birds in the air are great. The solids give just enough rest to the eyes for the pansies to shine. Maybe the "stalled" pansy blocks would benefit from sashing or alternate blocks. Just thinkin... They are too pretty to sit in a box.

I really like the Birds in the Air blocks with your pansy fabrics! The solid triangles really let the pansies shine! By tne end of the post you had me laughing! May all your birds take flight!

I like all the combinations of your flock, Cathy. The colorways are so vibrant!

You have lots of birdies on lines everywhere, don't you? All of them are really pretty, and will be even more so in flight formation rather than on a high line, or a low box. :) ---"Love"

You've got birds in the pansies and pansies in the air... Wait, I'm getting confused...
Pretty fabrics, for sure!

At this point I am thinking if it was my quilt I would be making it smaller, and the last collection would become a table runner! I applaud your perseverance however and sure you will get there, eventually!

I also like the Birds flying among the pansies (some of my own favorite fabrics, too)...the birds are all flocking here and winging around our trees...despite the summerlike temps they know it'll soon be time to go south...nice pieces you have going hugs, Julierose

I do so love reading your posts --- your sense of humor is wonderful! Love your BITA blocks.

Wow, what a story. Love the Birds in the Air blocks and the colours in them. You have so many options with all your different blocks, but I know you will come up with gorgeous quilt at the end. Waiting with baited breath to see it.

I love birds in the air blocks. You have some great layouts here

Amazing. I have tons of pansy fabrics, but I think I have only 2 or 3 of the same ones you have. I have lots of purple fabric, too. I could send some pieces, if you want. Just tell me how big.

I love your old pansy blocks with the purples and blues. It's a shame to leave them in a box on a shelf. Wow, 4 quilts of the same design in progress! I was feeling guilty about so many WIPS of my own, and no place to really store them properly. I don't know how you remember where each of your projects are stored and where you left off.

At this point, you have so many birds in the air they are blocking out the sky like the flocks of passenger pigeons! I'm glad to see you aren't letting them go extinct, though. Since there are 6 and 12 inch blocks, perhaps some can be combined into something scrappy. More like a zoo than a flock :)

Someone once told me (Kaja) that the back of quilts is a great place to work stuff out. I like double sided quilts, I feel like I can move more out without using up all my batting and making so many items. I just work as much as I can into one.

Hum, maybe you should play with all of these blocks and see what they look like together. What an opportunity for some creativity! Good luck.

One block, many fun quilts! I really like your pansy blocks. Very pretty. Good luck getting all your birds in the air landed.

So many great birds in air blocks. I didn't realize there were so many settings. Now you have my mind going.

So many birds - it is a difficult block to resist but you have enough for several flocks! I like the pansy fabrics, so I hope they make it all the way to quilthood.