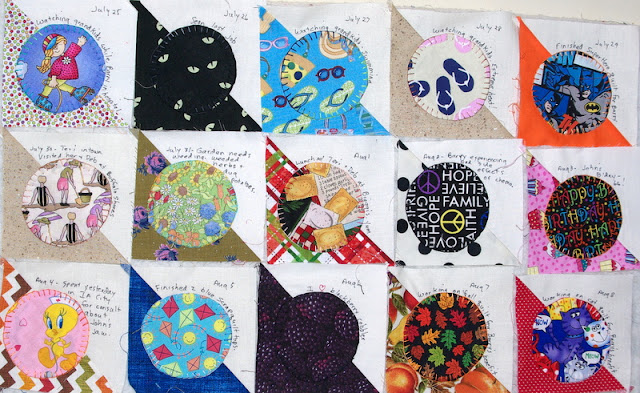 I had finished my circles up to July 24 when I posted about them last month.  Now I have only completely finished up to August 8.

My husband has a broken jaw due to osteoradionecrosis (death of tissue due to radiation he had for cancer).  The doctors are going to perform a mandibulectomy and fibula free flap reconstruction (rebuild jaw with his fibula).   We have been going to appointments and hour away at the University of Iowa Hospital and Clinics. One of the projects I've worked on during those road trips has been these circles.  He is due for a 12 hour surgery and 7-10 day hospital stay on September 29 so I've saved the rest of the August circles and September circles to work on while I'm staying up in Iowa City with him. 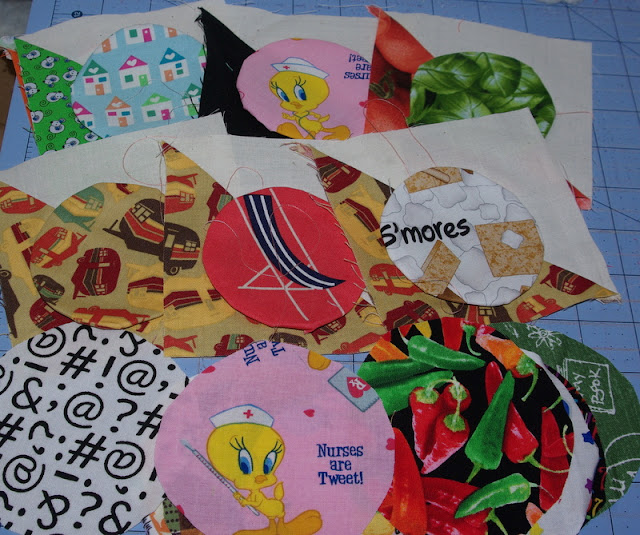 My circles are in various states...cut, basted, matched to HSTs.

I feel like almost every block for August should just be those punctuation marks (oh, cuss words!) but I have done a few other things like attended a family reunion camp out (and then came home from the trip to the awful smell of a dead mouse in a house without air conditioning- memorialized by the mouse HST with house circle) , canned spaghetti sauce and salsa, took grandkids school clothes shopping (boy, it sure gets more expensive every year), and watched the grandkids most of August while my son-in-law was in the hospital with leukemia.  My sister from CA paid us a visit. I also made a couple of quilts, made some delicious blackberry cobbler and some awesome grilled cheese/tomato/basil sandwiches on homemade bread.  And I've used up most of my Tweety "nurses are tweet" fabric memoralizing family medical problems- leukemia (son-in-law), broken jaw (husband), sepsis (86 year old dad), lyme and co-infection bartonella (granddaughter).  Oh, and my husband celebrated his 66th birthday (with day long dr. appts. in IA City).

I started my circles on Nov 4, 2015 because I was inspired by Audrey's (Quilty Folk) Quilty 365 idea.
September Link for August Circles

You seriously need more punctuation fabric...
Wishing you the best. Hang in there, and take care of yourself, too.

Find some fabric with a halo on it for you! Your blog name is very apropos right now I'm sure. Hang in there.

What a month! Saving up your circles seems such a good idea: they are a perfect portable project. I'm glad there have been a few little high spots amongst all those exclamation marks.

Love your choices of fabrics and how you are combining them with the HST backgrounds. I haven't been following this Make a Circle Block a Day project but think I have seen other people's dotted around the Internet using a square of fabric as the background. I think your HST idea is really great. Good luck to your husband for his surgery later this month and best wishes to you and all your family - you sound to have been having a horrendous time.

I think you might be needing to take the "sane" out of your blog title if you have another month like last. I hope your DHs surgery goes well and his recovery is speedy. Hugs to you and best wishes for good health for all of you. xo

Oh my goodness - what a series of things to deal with. All best wishes for your husband's surgery and recovery along with the others in your family --- and LOTS of hugs for you!

Oh, that is a tough surgery, Cathy. I am sending you both tons of good wishes! I hope the circles will help!

This quilt will really be an amazing document. It was an inspired choice to actually write in the details. I think a wide range of people will relate to the quilt and the shared experience. Great work!

Oh my goodness so sorry that your husband is having to go through all of that! Prayers to him!

Glad you will have something to keep your hands busy.:)

I have kept up with your blog for a while now and I love it...you have inspired me so much. Sending prayers for a speedy recovery for your husband and also for you...being the caregiver can take a lot out of you. Take care and get rest.