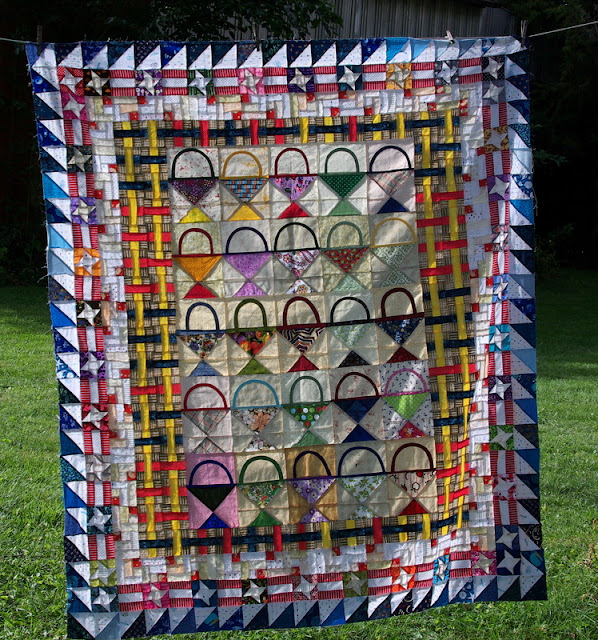 I know I'm a little early posting my final round of the Gwennie Inspired Medallion Quilt-along but I'm going out of town tomorrow after work and won't be back until possibly Oct 3 for a couple of days before I have to leave again so decided to get this post out of the way.  (I'm one of those goal oriented, plan ahead type As, don't you know). 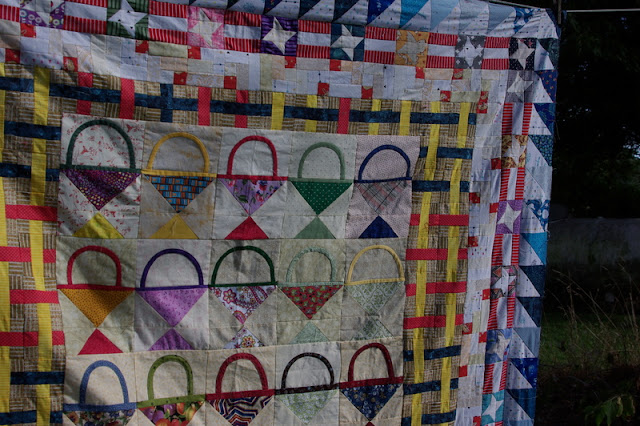 The theme for the center medallion was BASKETS.
I used some of the Block Lotto basket block winnings for my center.

Next round the theme was CHILDHOOD. Remember those woven potholders you probably made when you were a kid with those red looms? I loved making those when I was a little girl even though they weren't very practical as potholders. I graduated to other looms, none of them big, but I have made a lot of woven things including weaving a couple of baskets.  So, I made some woven blocks for my CHILDHOOD themed border. 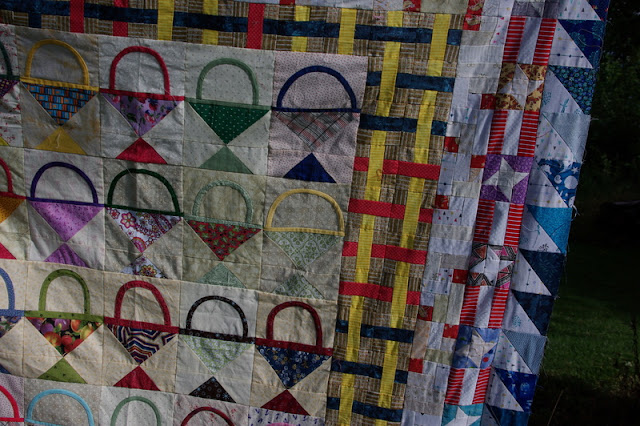 The next round's theme was LOG CABIN. So I made some neutral quarter log cabins (or are they half log cabins?)  I thought to use neutrals because the baskets were on neutral background and I used the traditional red center representing the hearth which happened to have some little baskets on it.

The next round after that was STARS.  I made friendship stars because friends from Block Lotto made me the baskets I used in the center. And then I used red/white rails between the stars  because I used red in the other borders and I like red.  The rails seemed to me to also continue a weaving kind of theme.  So far all the border blocks have been three inch finished size. 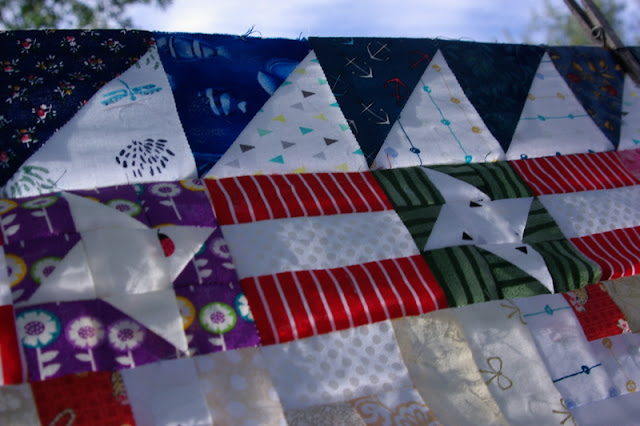 And then came the final round with a theme of FISH. FISH?! Seriously? Well, I thought long and hard and came up with WAVES for my border.  That's why the final border is blue. Fish live in the water and sometimes there are waves in the water where the fish live. 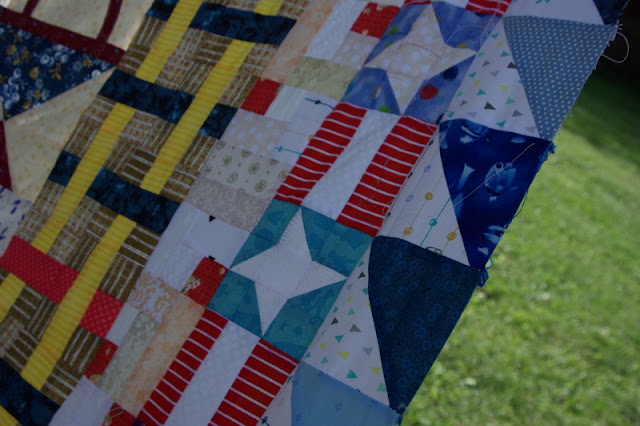 As you can see...there's some fish in those waves swimming up current and some fish bubbles and some other flotsam and jetsam. 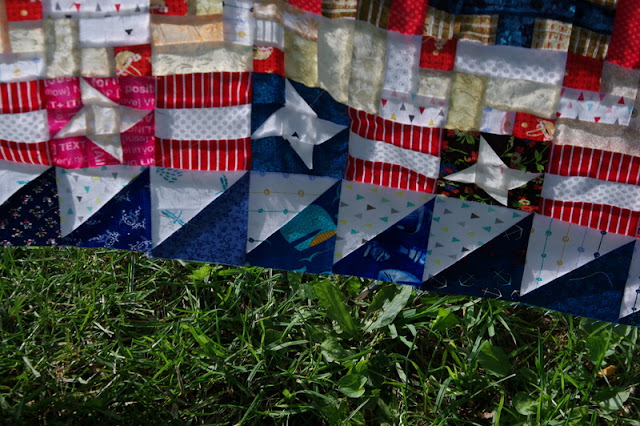 I also spy a whale, more fish, anchors and more flotsam and jetsam in those waves which consist of HSTs that will finish at 3 inches. 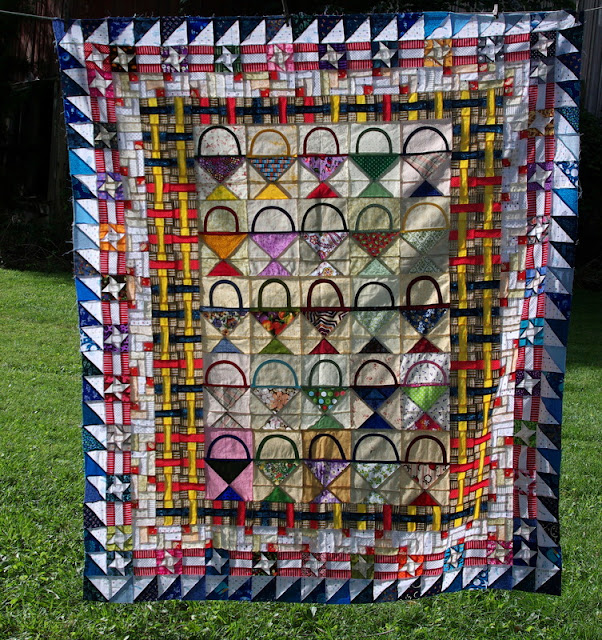 So that's my Gwennie Inspired Medallion Top.  Gosh that was fun!
I also had started a second one but that is stalled for now.

And now I have to say that I think that the making of this medallion could be considered improv quilting -  I had no idea what it would look like in the end when I started, bought nothing, used no pattern, used a variety of scraps and bits and pieces, had to use a little creativity to interpret a given theme for each round and even though each of us that quilted along used the same theme for each round not a single one of our quilts will look the same.  Gosh that's fun!

I just commented on Block Lotto but thought I would add more here. I really like how you have interpreted the themes. I have been taking part too and have really enjoyed the process. I think it is definitely improv. The last round really threw many of us a curve ball but I went with some very wonky flying geese which for my quilt are actually flying fish. I look forward to seeing how others interpret this theme.

Neat! I like all your different rounds on this

I love it! (I know I say that about every one of your quilts, but I always absolutely mean it! And in this case even more so!)
Hoping all goes smoothly for you.

Oh that is just spectacular!! and now I know how you get so much done - you are goal oriented!! I love it!

Touché!!! Excellent take on the Gwennie inspired Medallion QAL!!! Love your waves border. And I agree that this was totally improv and the results were spectacular.

I love it! Totally improv, and right on the themes. I agree - they are all so different and so Gwennie. I've just finished my last round and will be posting on the 1st - it took me a while to decide what to do. Safe journey...

Fish would have had me scratching my head too, but the waves were a clever solution and finish things off nicely. I love how this has evolved and how you have built meaning into the rounds as you went. I hope your journeys go well.

What fun! I love the baskets. In fact, I'm mulling over some for myself, too. The word prompts for the various rounds are a good idea, too. Thanks for linking with AHIQ. Have a safe trip.

The colors in this quilt are outstanding! I enjoy reading about the different rounds and how you interpreted the different themes. It looks fantastic, looking forward to seeing it completed.

Working improvisationally is probably my favorite thing--it doesn't have to mean wonky blocks and your quilt is a perfect example of that. Love it!

What a great way to resolve the fish border part of the challenge and give an excellent last border.

Cathy, it's WONDERFUL! The borders are the right balance for the center. I love it.

I agree, super flimsy! The medallion designs are classic, they always look good.

What a great quilt! Love that woven look to your borders. Perfect choices all the way around!

You did a great job on this, Cathy, it really looks good. You are probably away from the computer already, but best of luck tomorrow!

Such a fun quilt!

Oh I love it! So colorful and pretty!

This is a great quilt with perfect choice of colors and blocks !
It was a fun adventure....congrats !

Congrats on your first finish, I also used the wave idea for one of my tops but in a very different manner. Look forward to seeing your second flimsy when you get it done.

Nice border and a great finish!

It is absolutely improv, and your resulting top is just fabulous! So pretty with the sunlight shining behind it.

Perfect! I love waves and bubbles fabrics. It is a perfect end to a perfect medallion!

The colors of water on your final round. A very creative quilt. Would you enjoy the same type challenge again?