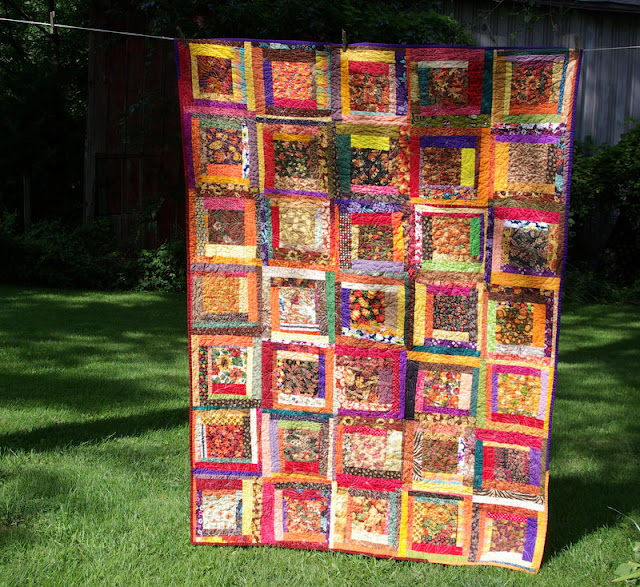 This will be donated for silent auction at my son-in-law's benefit September 24. He has acute myeloid leukemia (AML) and the medical bills are mounting and now the oncologist has said he will probably need a bone marrow transplant.

I didn't want to spend a lot of money on a quilt that might not bring in as much as it was really worth in time and materials. I would rather just give that money outright  to my daughter and son-in-law and family(and have) than lose money on a quilt.   So, I turned to the scrap bin and have pretty much only my time invested in this quilt.  And I actually needed some mindless sewing therapy now so the time was well spent.  Win, win! 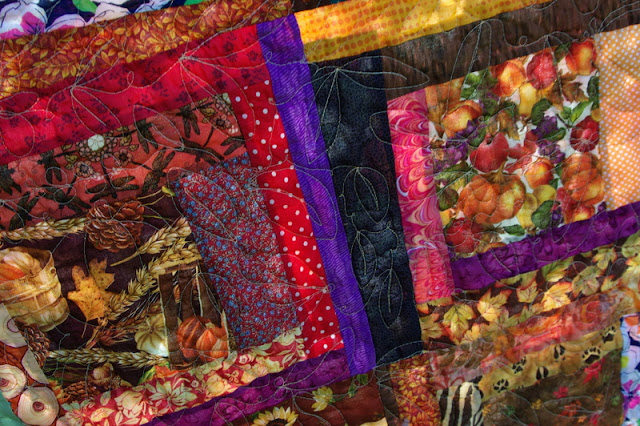 I actually keep an autumn box of bits and pieces of scraps.  I throw in browns, golds, reds, deep purples, yellows, oranges...well, you know the colors of autumn in all it's glory.

I had a couple of 12 inch wonky logs already in the box so I just made more.  For the centers I used some swapped "charms" in an autumn theme that I swapped oh so many years ago. They have been in the bottom of the autumn scrap box for ages - it was time for them to see the light of day. 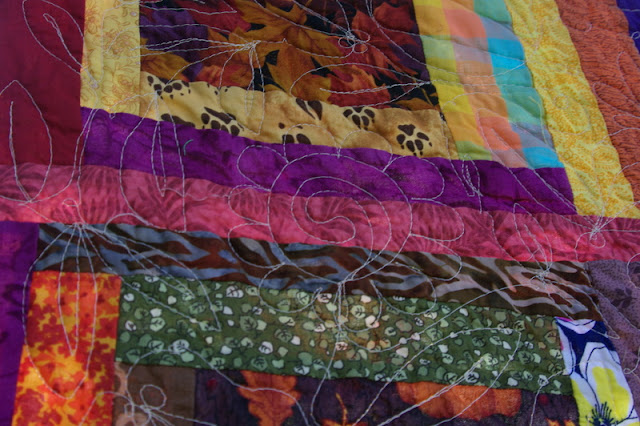 I pieced together leftover batting and then quilted it on my DSM with some sunflowers... 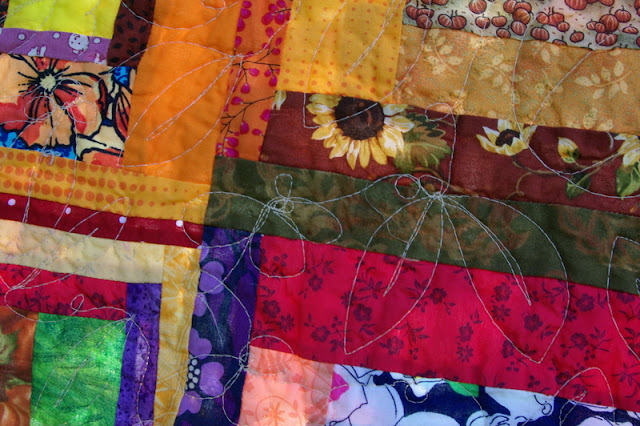 ...with some leaves and three petaled flowers... 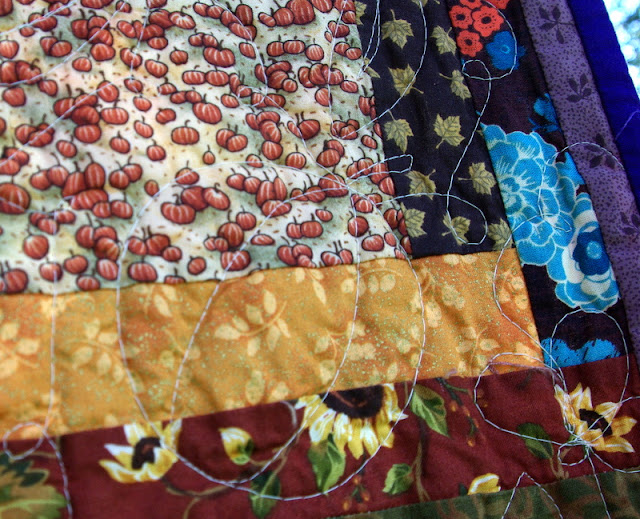 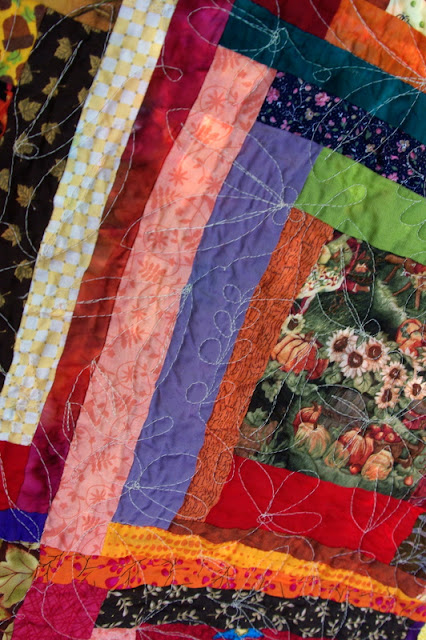 I've never really "doodled" like that on a quilt but it was actually kind of fun. 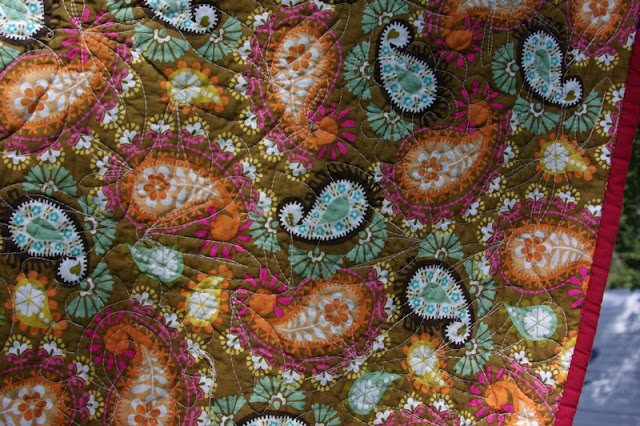 I used leftover binding pieces in autumn colored solids (red, purple, orange, yellow) and a piece of autumn paisley for the backing.

Oh Scrap!   at Quilting is More Fun than Housework

It's beautiful and rich with all of these autumnal tones. I am so sorry that your family is going through this ! :(

I hope your beautiful autumn quilt brings in lots of money for your son-in-law's treatment. I, too, am so sorry your family is having to go through this!

This has to have all the bidders falling over one another to make the highest bid it's so beautiful. I hope you are able to raise the amount you need to help your son-in-law with this one.

Your quilting is really pretty, Cathy. I love that doodle quilting! I hope the quilt does well. Best wishes to you all!

Beautiful Autumn! The colors are gorgeous and who doesn't love a good log cabin block?!

Perfect choice for this time of year. Your colors are lovely! I am sure your quilt will do really well. Thanks for sharing this rich and colorful quilt with Oh Scrap!

It's a beautiful autumn quilt. I love it!!! I hope it brings in the much needed money for the family.

Beautiful autumn quilt shining in the sun! I hope it raises a big pile of money!

It's a gorgeous quilt! I hope it raises lots of money. Sending healing prayers and vibes for your family!

Such a lovely quilt--sending best wishes out to your family...hugs, Julierose

Oh it is beautiful!! I am so sorry to hear about your son. May blessings rain on all of you.

That's a darling quilt with pretty and fun quilting stitches. My thoughts are with your dear son-in-law.

I love the colours in this quilt and the purple and red gives it a 'pop' - I hope you manage to get lots of much needed money for your family crisis.

That is a gorgeous quilt. It really sings autumn. I hope you will (because you should) get a lot of money for it! Today I quilted on my Notting Hill quilt, and since it's a sampler I have been doing different things in different blocks. And doodling like you did. You're right - it's fun! And the more we practice, the better we get!

A true scrappy quilt - you should get a good bid for this beauty. Best wishes for a full recovery for your sil.

Scrappy quilts end up being the most "rich" looking in my book, and those warm autumn prints make your quilt just glow. I hope it brings in much more than your expectations, I can't think of a better cause! Wishing your family members a quick and total recovery from all they are enduring right now, and peace for your heart as you help them bear these burdens.

The colors in your quilt caught my eye immediately. It's a great idea for a donation quilt! Blessings and prayers to you and your family as you go through this tough time. Wendy at piecefulthoughts@gmail.com

It's a beauty! I hope it brings in a ton of money for your family.

A beautiful, warm-coloured quilt. I hope the quilt, and the rest of the auction, raise loads of money.

This is a beautiful quilt. In another month it will blend perfectly with the glorious colors of autumn. I hope it brought in a lot of money for your son-in-law. Have you thought of setting up a "go fund me" account? I don't know much about them but hear them mentioned on blogs and occasionally on the news.
--Nancy. (ndmessier @ aol.com, joyforgrace.blogspot.com)

This is a very beautiful fall quilt and I love all the different doodling quilting on it!