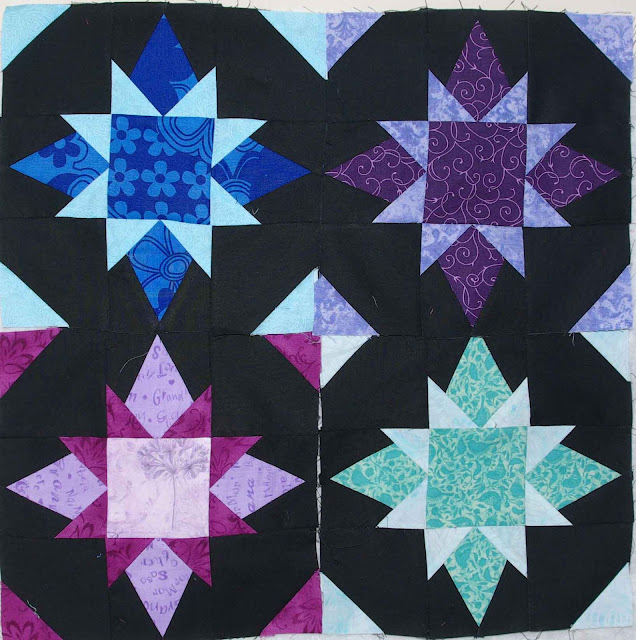 I made four 9 inch Twinkle Stars for this month's Block Lotto.  I used the Tri-Rec ruler that I rarely let out of it's drawer.  I will probably make 5 more before the end of the month. 9 entries is the limit. I hope I win these. I really like them. And although I won several times in the last couple of years I haven't won at all this year so it's about time my lotto luck changed.  And if it doesn't...I made good use of some 3.5 inch scraps for someone else's benefit. I'm fine with that too. 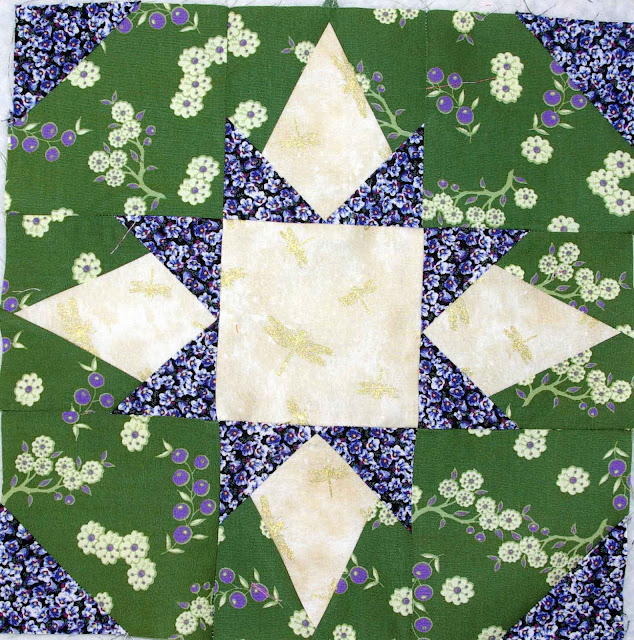 And since I had the Tri-Rec rulers out...I made another Twinkle Star block...only this time it was 12 inches and used scraps from the 4.5 inch block.  I belong to a "Birthday Club" and we send each member of our club a block in their birthday month made according to their specs. Corinne requested any 12 inch block that used at least 5 pieces in the colors green, cream (on the yellow, not pink side) and purple (on the blue side). 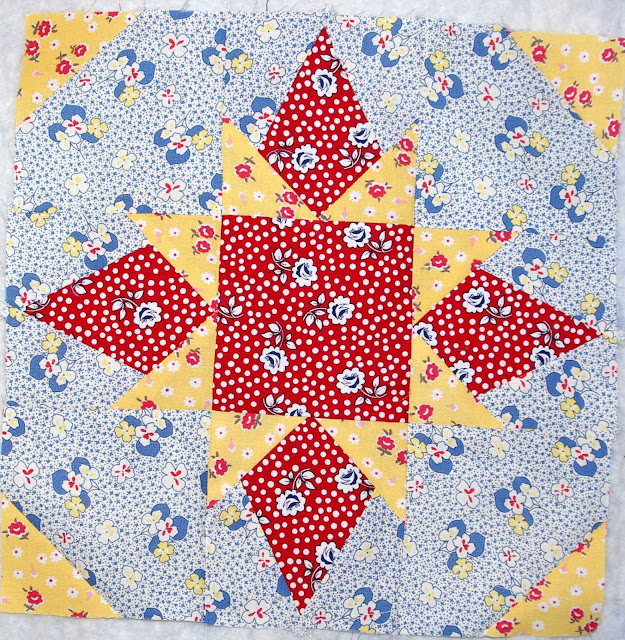 And, again, with the Tri-Rec rulers out...I made myself a 12 inch Twinkle Star. In a year past I had requested a 12 inch star block of maker's choice in 30s repro fabrics with a blue background. I've added to the pile myself since then but don't have quite enough yet for a big quilt.  I think I have a few other Star blocks in mind now that I know I can actually use the Tri-Rec rulers without cussing. 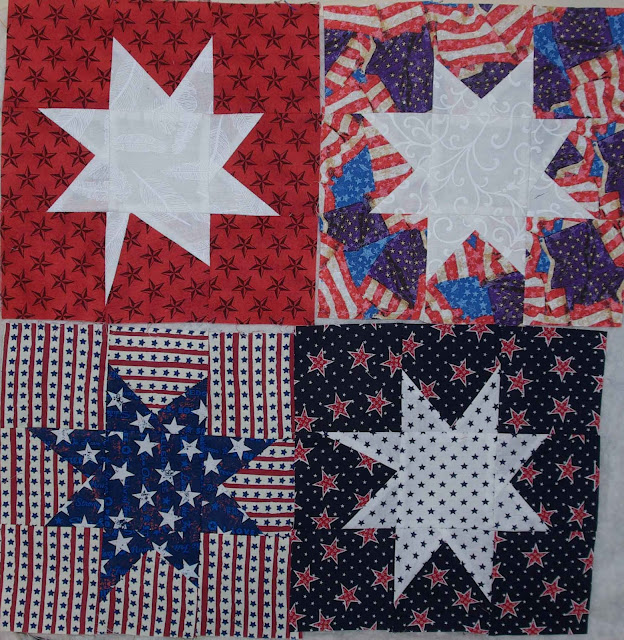 Then I finished up some more 9 inch Wonky Stars for Alycia's 2015 Wonky Star Quilts of Valor Block Drive.   There's 20 in all and my husband put them in the mail this morning.  No design wall in this house...just some leftover batting wrapped over my cutting mat to stick a few blocks on for photo shoot so you get the following separate photos of four.

I hate to say this but I sort of amused myself with that upper left star in the photo above...background is stars and star is tone on tone white with feathers.   And I thought...that's as close as I will probably ever come to a "Feathered Star".     (I said I "sort of" amused myself. Groan). 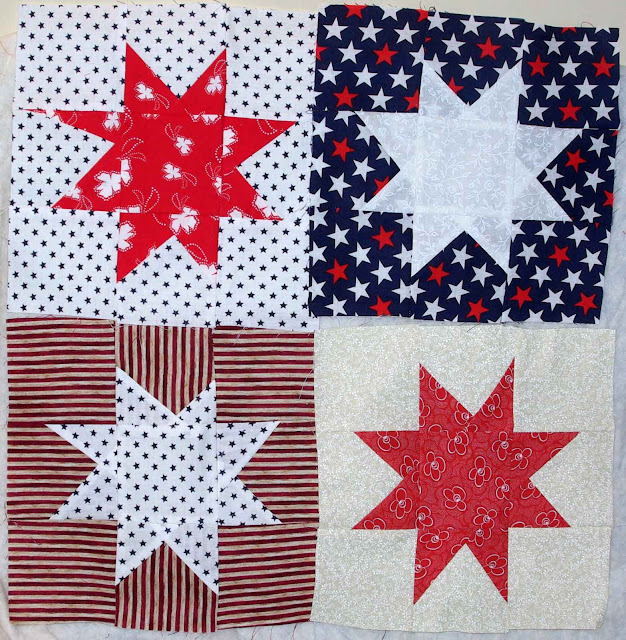 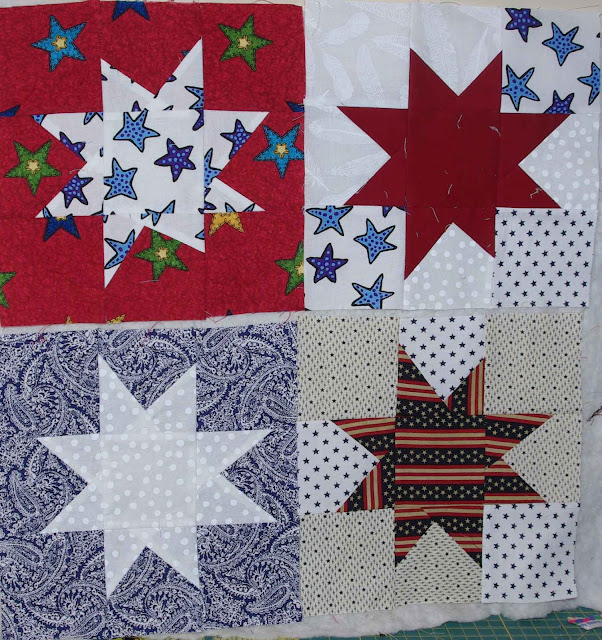 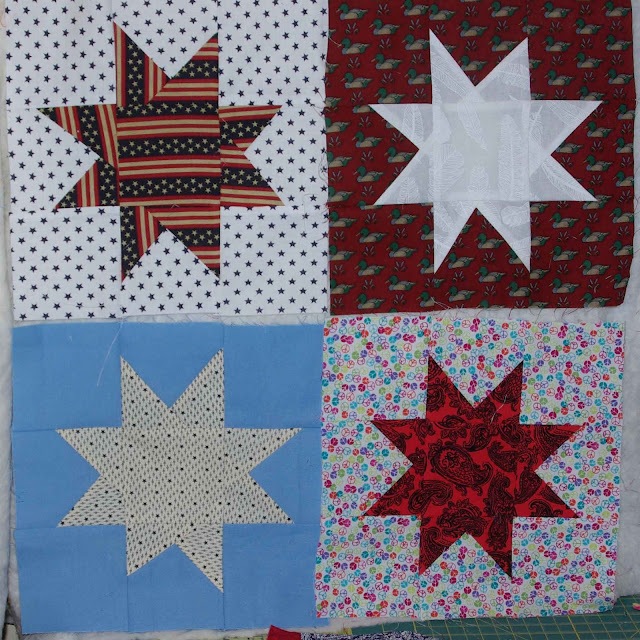 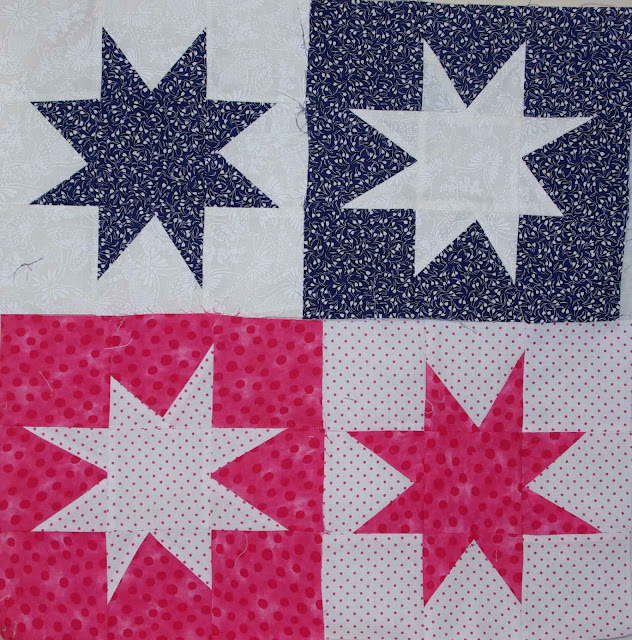 Looks like you'll have a patriotic quilt soon. I like liberated stars. And your twinkle star is wonderful.

I love your Twinkle stars! I've got one of those quilts in my future. I made a couple of test blocks a while back, though I might end up doing it for next year's RSC.
And your Wonky stars are a riot!

they are beautiful, i love stars

I hear ya on those Tri Rec rulers...I CUSS too!!

That's a lot of stars! Isn't it interesting how the fabrics you choose can make such a difference to the look of the block?